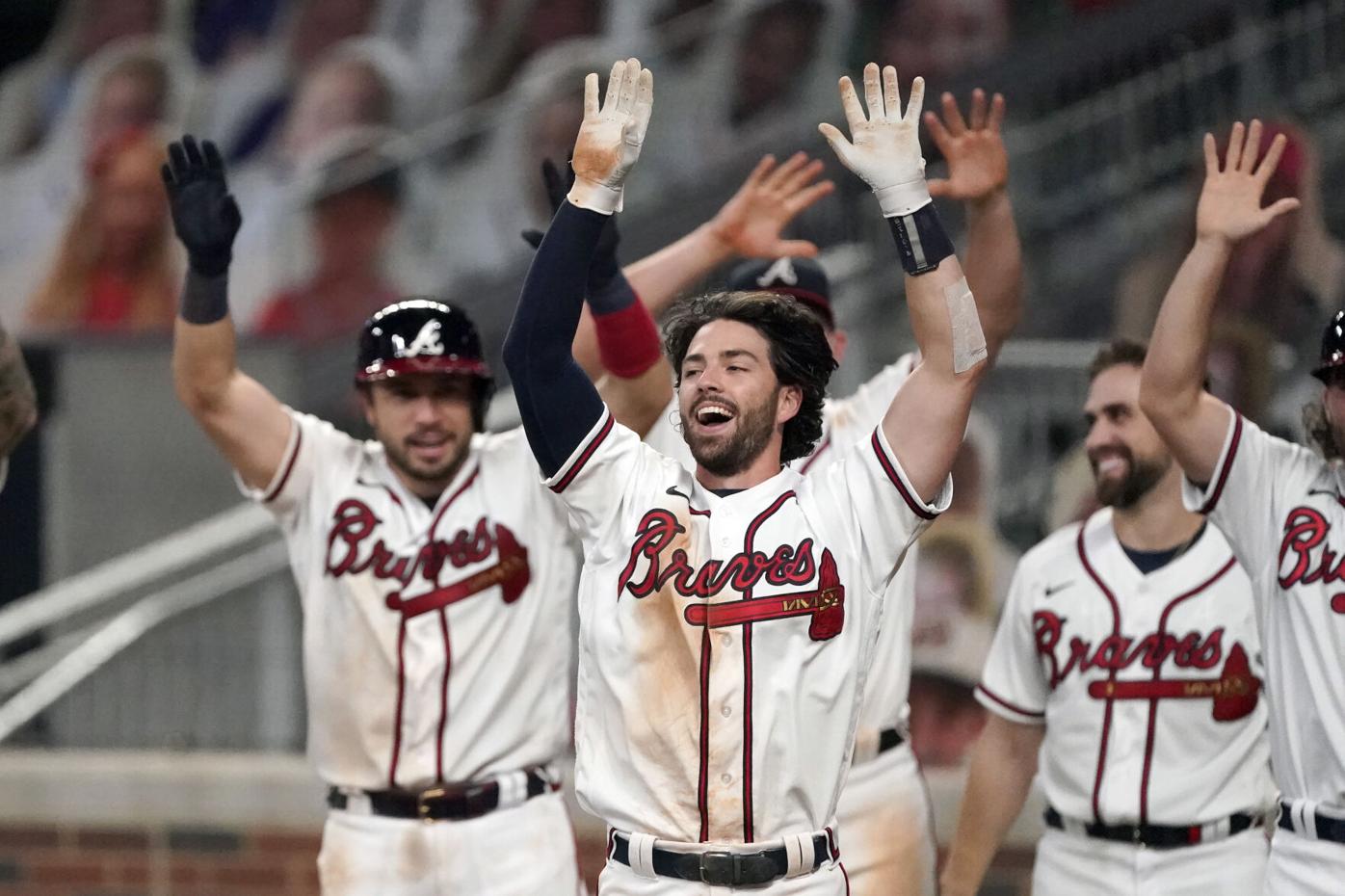 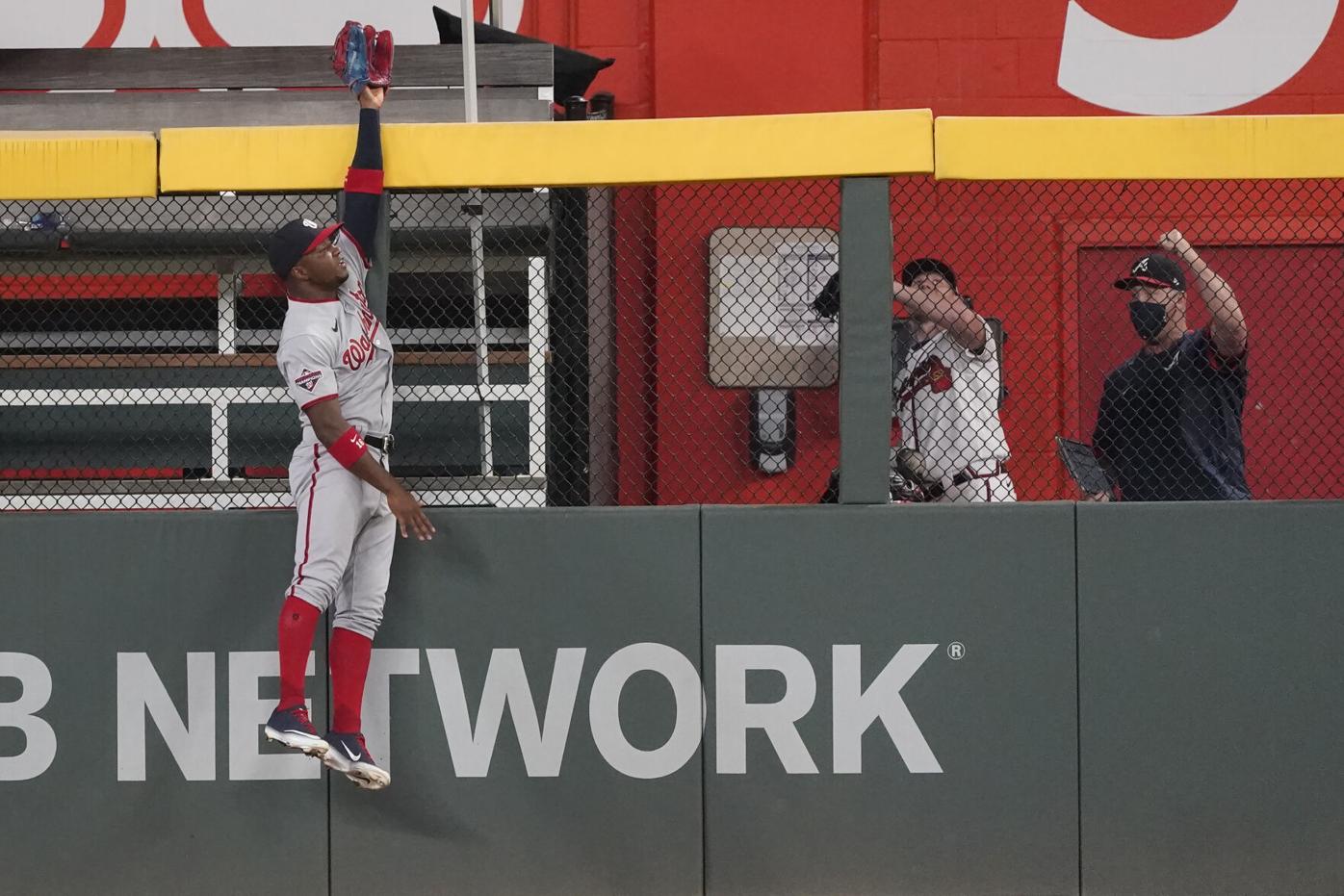 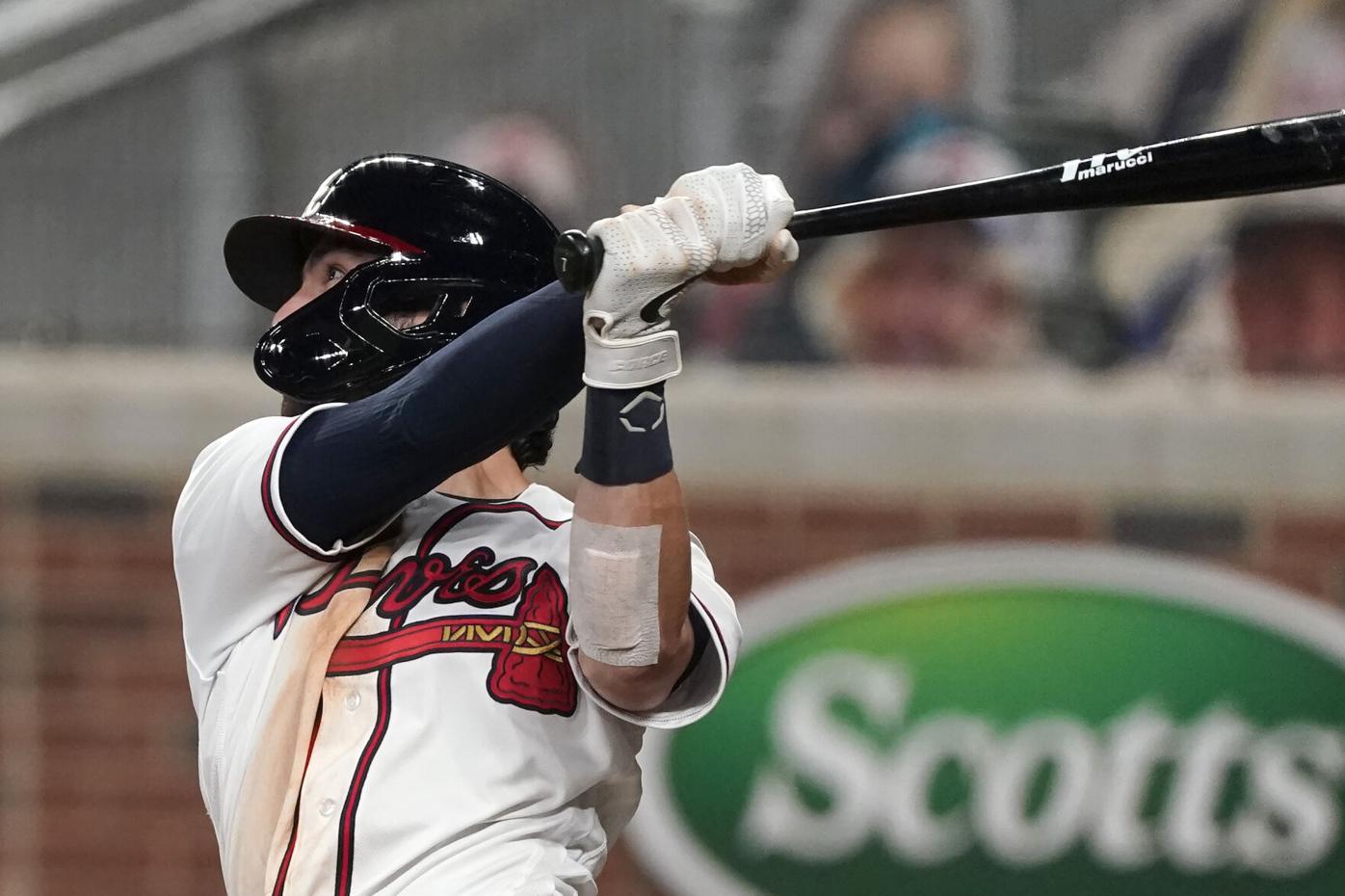 Atlanta Braves' Dansby Swanson follows through on a game-ending, two-run home run in the ninth inning of the team's baseball game against the Washington Nationals on Monday, Aug. 17, 2020, in Atlanta. The Braves won 7-6. (AP Photo/John Bazemore)

Atlanta Braves' Dansby Swanson follows through on a game-ending, two-run home run in the ninth inning of the team's baseball game against the Washington Nationals on Monday, Aug. 17, 2020, in Atlanta. The Braves won 7-6. (AP Photo/John Bazemore)

ATLANTA — Dansby Swanson hit a two-out, two-run homer in the bottom of the ninth inning to cap a four-run rally that gave the Atlanta Braves a stunning 7-6 victory over the Washington Nationals on Monday night.

With the Braves trailing 6-3 against Washington closer Daniel Hudson (1-2), Adam Duvall made it close by hitting a two-run shot that just cleared the wall in left field. Johan Camargo followed with a single, but Hudson retired the next two hitters to put the Braves down to their final out.

Swanson drove one over the wall in right-center for the game winner. When he got to home plate, his teammates toasted him from afar, jumping up and down with their hands in the air.

The rally ruined a memorable night for Washington rookie Luis Garcia, who became the first player born in the 2000s to hit a big league homer.

The youngest player in the majors at age 20, Garcia hit a two-run shot off Touki Toussaint in the second inning. Asdrubal Cabrera, Juan Soto and Eric Thames also homered for the defending World Series champs, but it wasn't enough.

Garcia, who was born on May 16, 2000, came into the shortened season as one of Washington's top prospects. He got his chance when Starlin Castro went on the injured list with a broken right wrist and doesn't look over-matched in the least.

Two batters later, Thames delivered an even longer drive over the center-field wall to give the Nationals a 3-0 lead.

The Braves responded with two runs in the bottom half against Anibal Sanchez, but Toussaint surrendered another run in the fourth without giving up a hit. The right-hander hit a batter and walked three more, including Kurt Suzuki with the bases loaded.

When Toussaint started the fourth with another walk — his sixth of the game — Braves manager Brian Snitker had seen enough. It was another blow to Atlanta's beleaguered rotation, which lost ace Mike Soroka to a season-ending injury and demoted two other starters, Mike Foltynewicz and Sean Newcomb.

Toussaint's spot in the rotation now appears in jeopardy after another shaky start. He gave up four runs in three-plus innings and threw only 34 of 73 pitches for strikes, his ERA climbing to 7.97.

Cabrera went deep off Grant Dayton for his fifth homer of the season in the fifth. Soto, on the day he was announced as NL player of the week, led off the ninth with seventh homer against Will Smith (2-0).

Washington's Howie Kendrick did not start for the third game in a row because of a sore hamstring. Manager Dave Martinez said the team is taking no chances with the oft-injured veteran, though the injury does not appear to be serious. “We've just got to be smart,” Martinez said. “We don't want to lose him for three weeks. If we lose him for three weeks, that's pretty much game over.”

Nationals: RHP Austin Voth (0-2, 3.21 ERA) gets the nod for Washington on Tuesday in the second game of the series at Truist Park. He is hoping to bounce back from a rough outing at New York, where he gave up six hits, three runs and two homers in four innings against the Mets.

Braves: For the second time in three games, Atlanta's beleaguered rotation will go to the bullpen for a starter. RH Josh Tomlin (1-0, 1.59) makes his first start of the season, hoping to duplicate the performance of Robbie Erlin on Sunday. Erlin went four innings in a 4-0 victory over the Marlins, giving the Atlanta staff a much-needed boost. While Tomlin has been used mostly as a reliever during his two seasons with the Braves, this is hardly a new role. He made 144 starts over nine seasons with Cleveland.