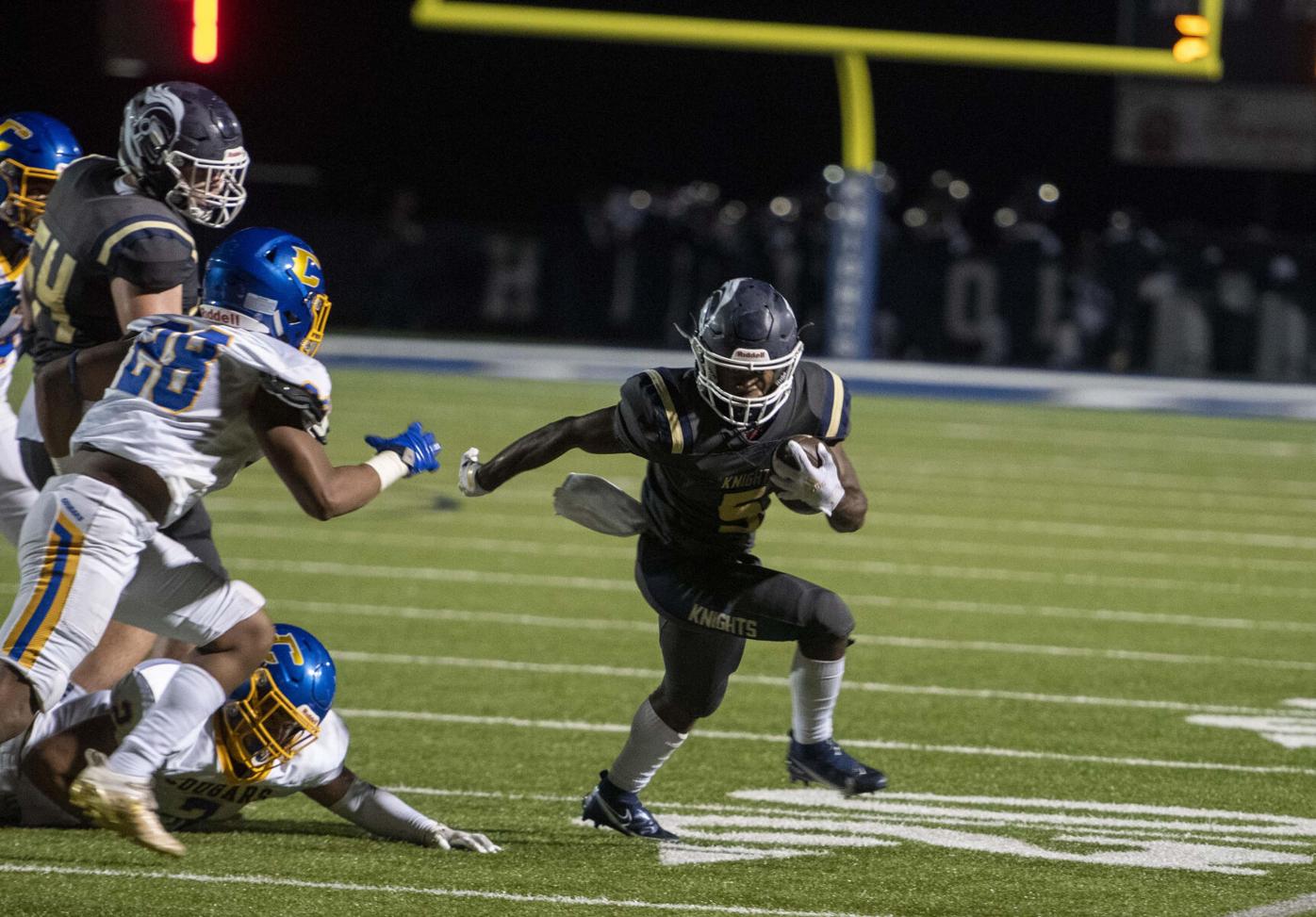 River Ridge’s Amehre Morrison runs the ball against Chattahoochee. After an undefeated regular season in 2020, the Knights are off to a similar start in 2021. 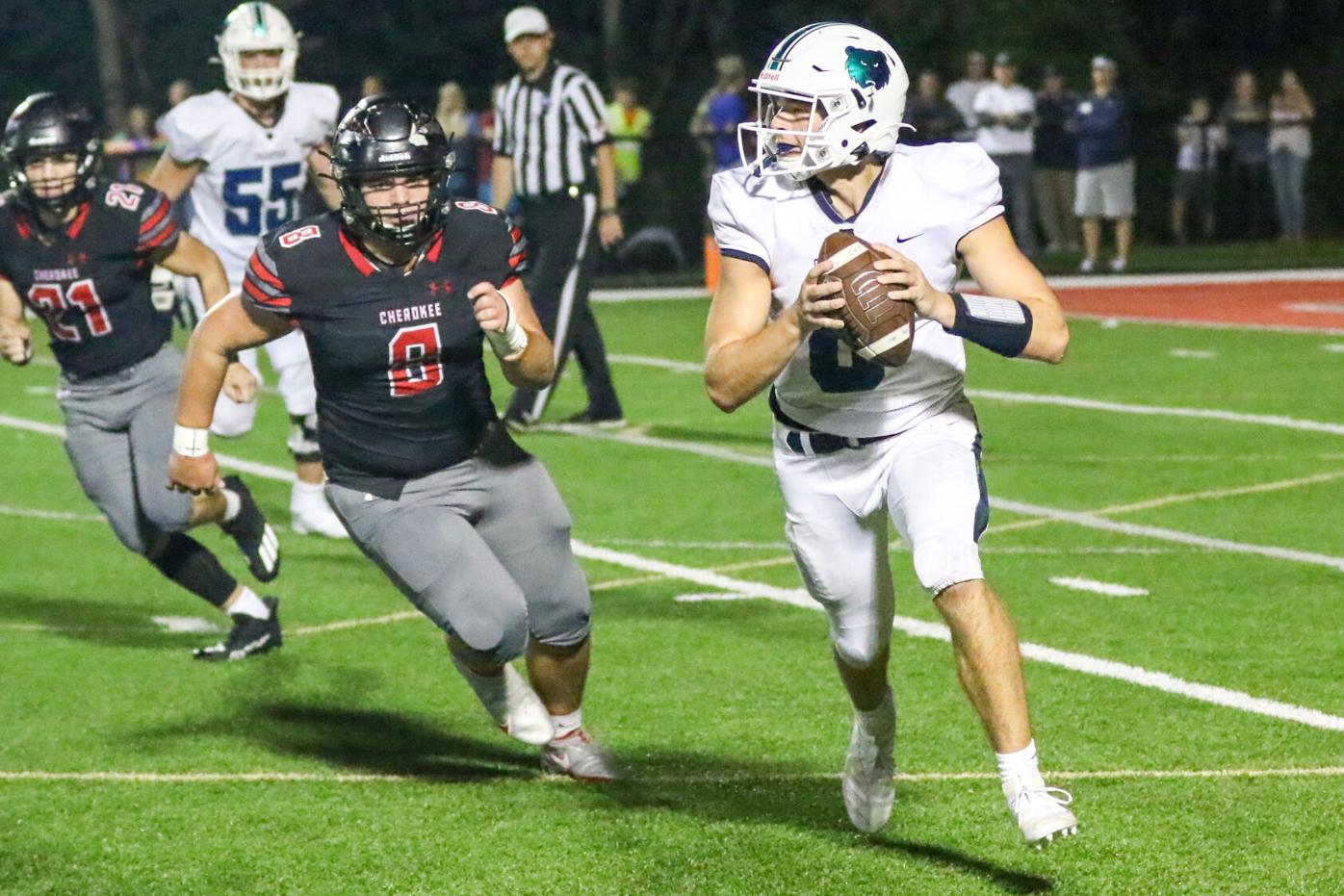 Creekview quarterback Mason Hicks scrambles to the outside under pressure from Cherokee’s Jaxon Holcomb earlier this season.

River Ridge’s Amehre Morrison runs the ball against Chattahoochee. After an undefeated regular season in 2020, the Knights are off to a similar start in 2021.

Creekview quarterback Mason Hicks scrambles to the outside under pressure from Cherokee’s Jaxon Holcomb earlier this season.

As the first five weeks of the season have come and gone, there have been some great starts by Cherokee County’s football teams.

After finishing the 2020 regular season with an undefeated 9-0 record, River Ridge is off to much the same start in 2021, winning its first four games.

Last Friday, the Knights opened their Region 7AAAAAA schedule with a 33-7 victory over Chattahoochee. They have scored 139 points on the season, for an average of 34.5 points per game.

The offense picked up right where it left off from last season. Running back Amehre Morrison is a major component to the offensive unit again, taking a county-leading 486 yards and six touchdowns into the break.

Before the win over Chattahoochee, River Ridge coach Michael Collins said he was making sure his team took the season day-by-day to avoid complacency. Collins said he believes his team is peaking at the right time, and nothing has been too surprising so far.

River Ridge is not without its challengers, however.

Creekview is 3-1 and was unbeaten before last Friday’s 7-0 loss to Cambridge.

Through the first five weeks, the Grizzlies’ most impressive win was their 21-14 victory at Cherokee. The defense has been a big part of the early success as Creekview is only averaging seven points per game, including a shutout of Woodstock.

Offensively, Creekview is led by quarterback Mason Hicks, who threw for 531 yards and five touchdowns in the first four games. Tyler Stevens has also been a key asset with 186 rushing yards, 128 receiving yards and eight total touchdowns.

Creekview will match up with River Ridge on Oct. 8 in a game with region and playoff implications. That comes after the Grizzlies square off with archrival Sequoyah on Oct. 1.

The Chiefs are 2-2 overall but have some quality games under their belts. In the season opener, they shut Woodstock out 28-0 behind a strong run game and defense that has carried over.

Built to wear teams down with its run game, Sequoyah averaged 333.7 yards per game on the ground through its first four games.

The Chiefs’ first loss came in a one-point game to Cherokee, which came down to a failed 2-point conversion. The second loss came to Johns Creek after they could not keep up with the Gladiators’ offensive outburst.

With Sequoyah only having the one region loss, there is still plenty of time for it to make a run at Creekview and River Ridge. The Chiefs play the Knights on Oct. 22.

Region 5AAAAAAA is a different story.

After going 8-3 last season, Cherokee has already equaled its loss total with a 2-3 mark in 2021. The Warriors won their first two games, but they have fallen in each of the last three.

Cherokee, though, boasts the county’s leading passer in AJ Swann, who has 858 yards and eight touchdowns through five games.

Etowah and Woodstock round out the region, but both teams are winless to this point, with the rebuilding teams a combined 0-9. However, the Eagles and Wolverines have made strides on defense and could pull off some upsets going forward.