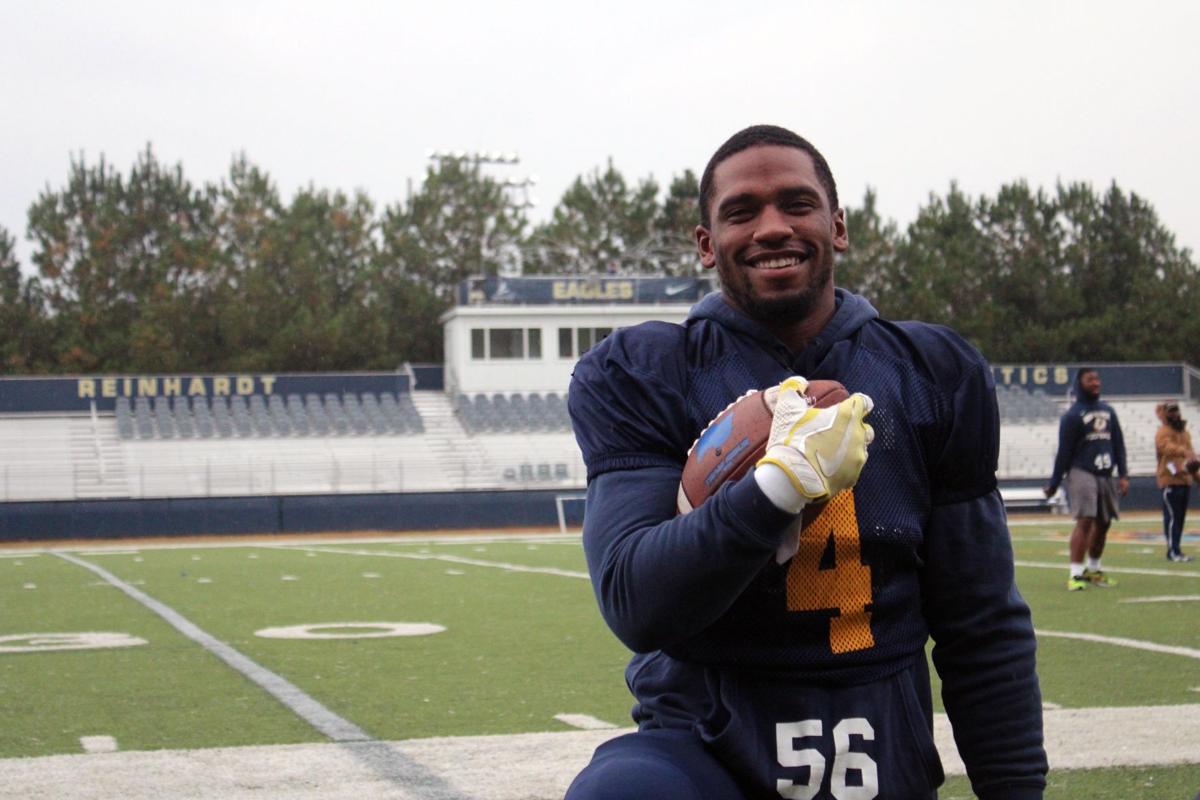 Reinhardt University running back Trevae Cain is tied for the team lead with eight rushing touchdowns this season. 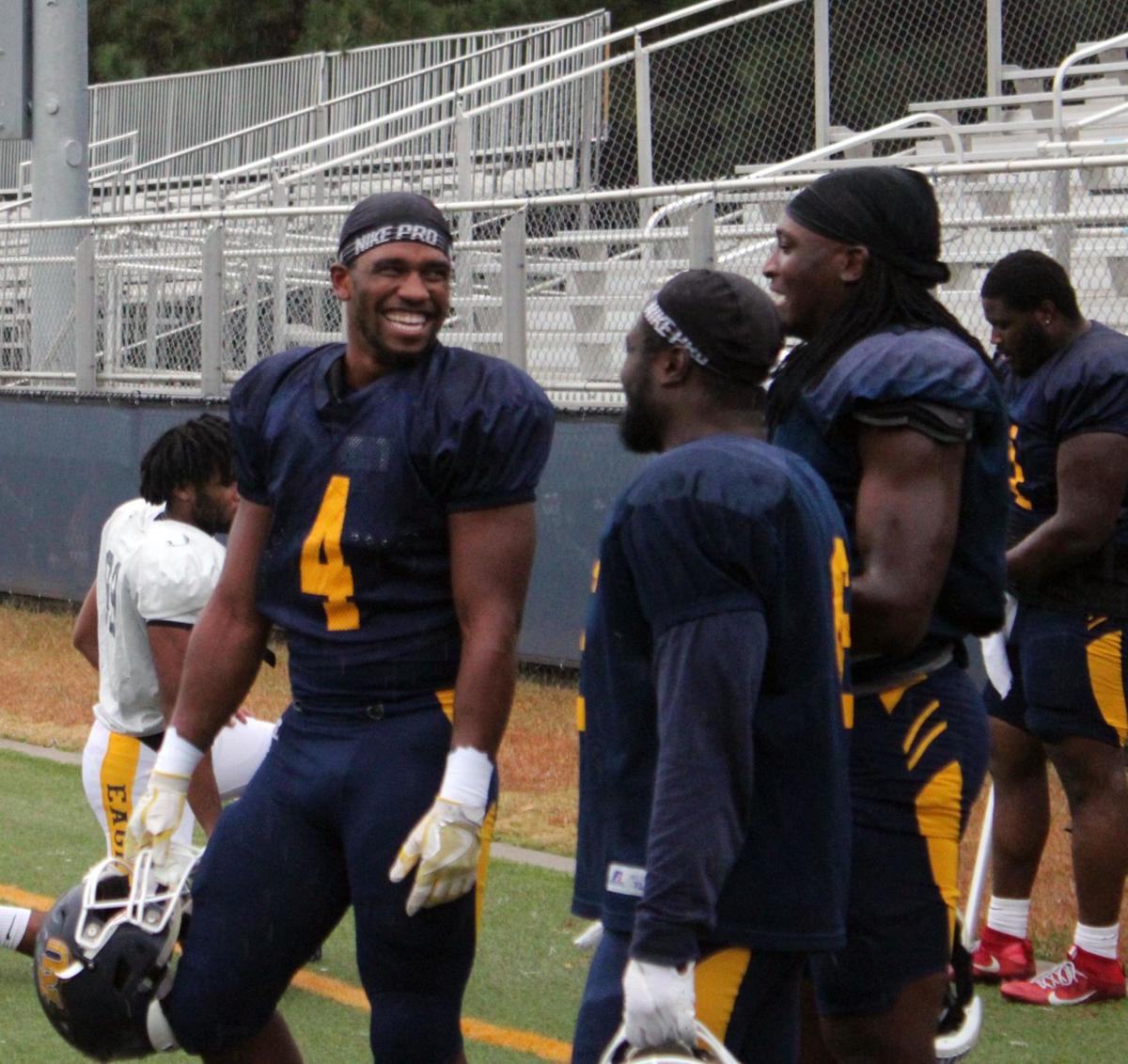 Now in his fourth year on the Reinhardt campus, running back Trevae Cain has become a team leader for the Eagles. 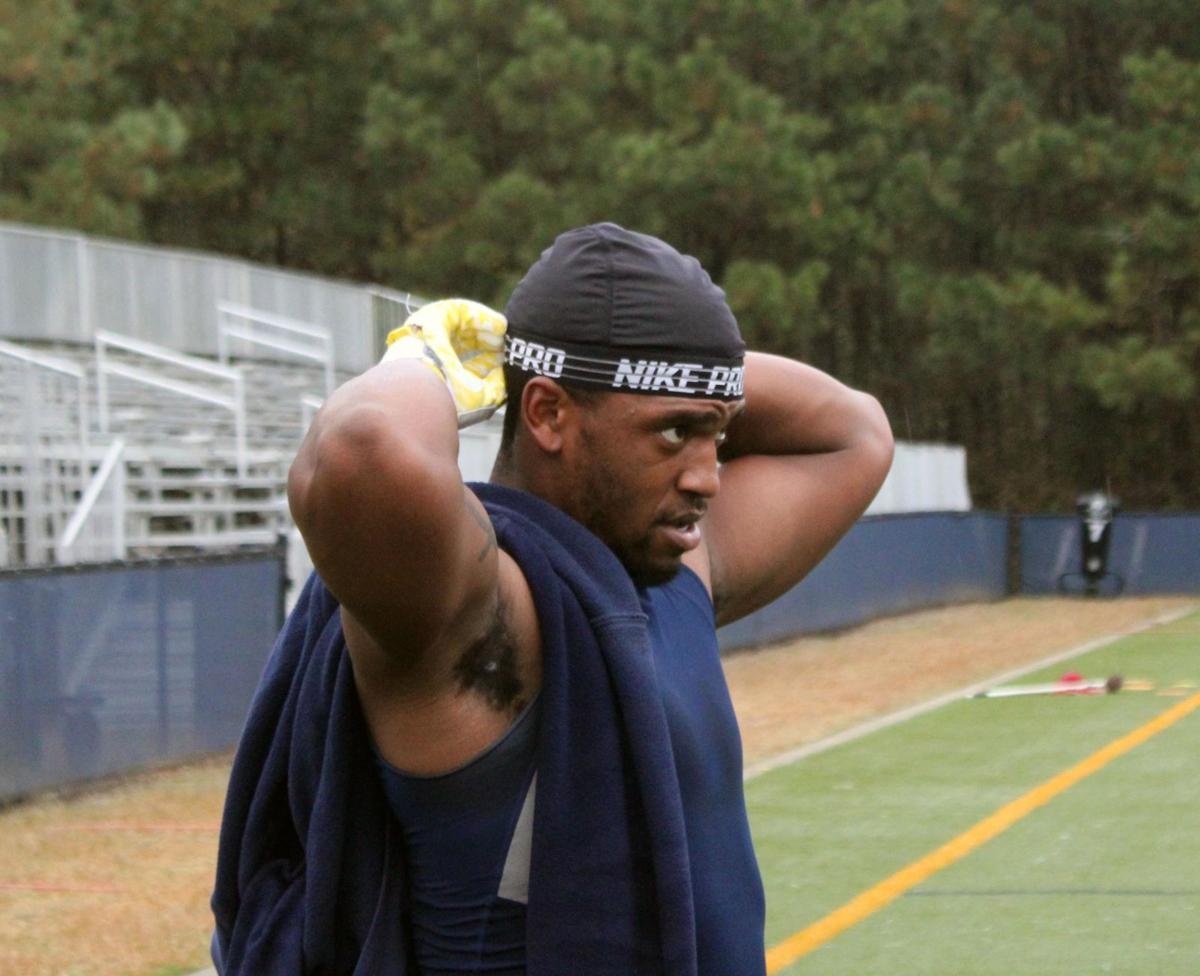 Reinhardt University running back Trevae Cain is second on the team with 507 rushing yards this season. 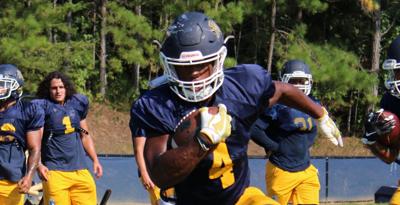 Reinhardt University running back Trevae Cain is tied for the team lead with eight rushing touchdowns this season.

Now in his fourth year on the Reinhardt campus, running back Trevae Cain has become a team leader for the Eagles.

Reinhardt University running back Trevae Cain is second on the team with 507 rushing yards this season.

WALESKA -- Even in a crowded backfield, Trevae Cain manages to stick out.

The 6-foot, 225-pound redshirt junior running back has been at the center of Reinhardt’s running game, but according to coaches and Cain himself, the growth he has experienced off the field is more impressive than his play between the lines.

Cain had never been on this side of the state before he came to Waleska on a visit four years ago. Coming out of Banks County High School in east Georgia, Reinhardt was Cain's only college offer and he said it didn’t take long to decide whether or not to pursue his dream of playing college football.

“I came up for a basketball game and they offered me. I liked the school and wanted to play college football, so I just ran with it,” Cain said. “We came in with 95 players that year, but there’s only about 10 of us left from that class.”

“He’s one of our best players on offense,” Reinhardt coach James Miller said. “He’s not really going to wow you in the weight room or when he runs the 40 (yard dash), but when he puts the pads on, he will absolutely show you what kind of player he is.”

This was a great grab by Trevae Cain on the sideline on Reinhardt’s scoring drive to end the half. @ReinhardtFB pic.twitter.com/PGrvEwxlNs

During Reinhardt’s season-opening win over Webber International, Cain was taken out of the game and could be seen visibly upset on the sideline. Miller spoke with him and, after the game, Cain apologized to his teammates and coaches for letting his emotions get the best of him.

It was a learning experience for Cain, and one which brought him closer to his teammates.

“He grew as a person from that experience,” Miller said. “He grew as a young man and as a leader. That incident really took everybody back because it was really out of character for Trevae. He’s really responded really well and he’s matured into a young man who we trust both on and off the field.”

Cain also became a father in September 2018, another life experience which accelerated his development as a young man. Cain beams with pride when he speaks of his now 1-year-old son and doesn’t take for granted the gift of watching his child grow up.

Cain said he has followed the lead of fellow running back Montralius Mosely during his time in college, while Fred Jones, Reinhardt’s offensive coordinator and running backs coach, has also served as a mentor.

Jones agreed with Miller with regards to Cain’s development off the field and said the man seen today is different from the 18-year-old who showed up on campus four years ago.

“It’s not a surprise when you see a kid have success when you see the work they put in,” Jones said. “He handles his business whether it’s his kid, his school work or football. He’s not the average kid where you have to stay on him about doing the right thing. He takes everything more serious now. I think he used to just play football, and now I think he’s trying to take advantage of all the opportunities football can provide.”

Cain said he would like to get into sales after his playing days are done and possibly merge that with his passion for firearms. The self-described “country kid from Banks County” grew up hunting and riding four-wheelers, but he also added he has not completely given up on possibly becoming a nurse in the future.

For now, Cain focused on being a leader on a relatively young football team.

Reinhardt (8-2, 5-0 Mid-South Conference) is on its final bye week before playing its final regular-season game next Saturday at home against Union.

For fans in the stands, it is easy to see the bruising running style of Cain, but it may be harder to see the young man behind the facemask.

“I’m a lot different than I was a few years ago,” Cain said. “I was pushed into the leadership role, and with me being an older guy who’s been here four years now, I have no other choice but to speak up. We have a lot of younger dudes on the team who need guidance and direction just like I got.”