The Latest: Chinese man jailed after not report… 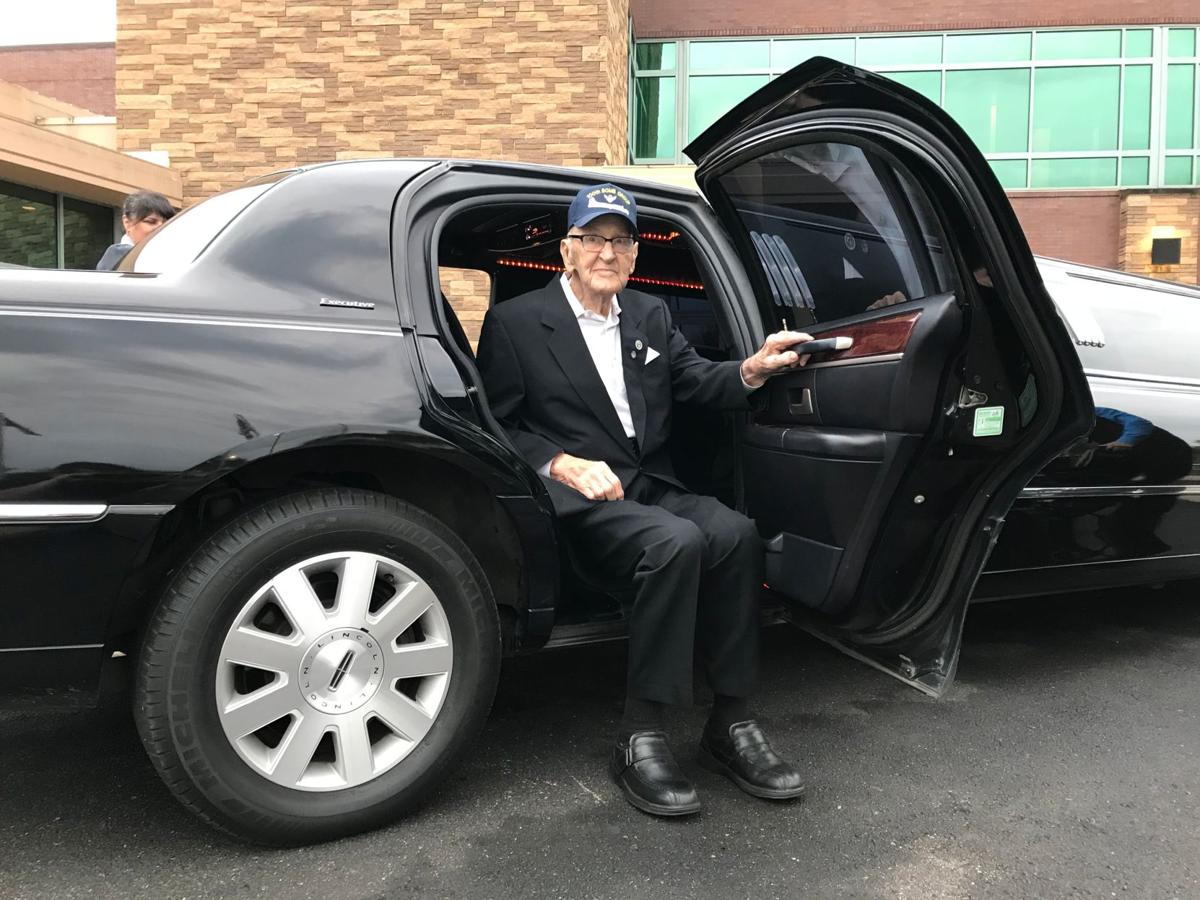 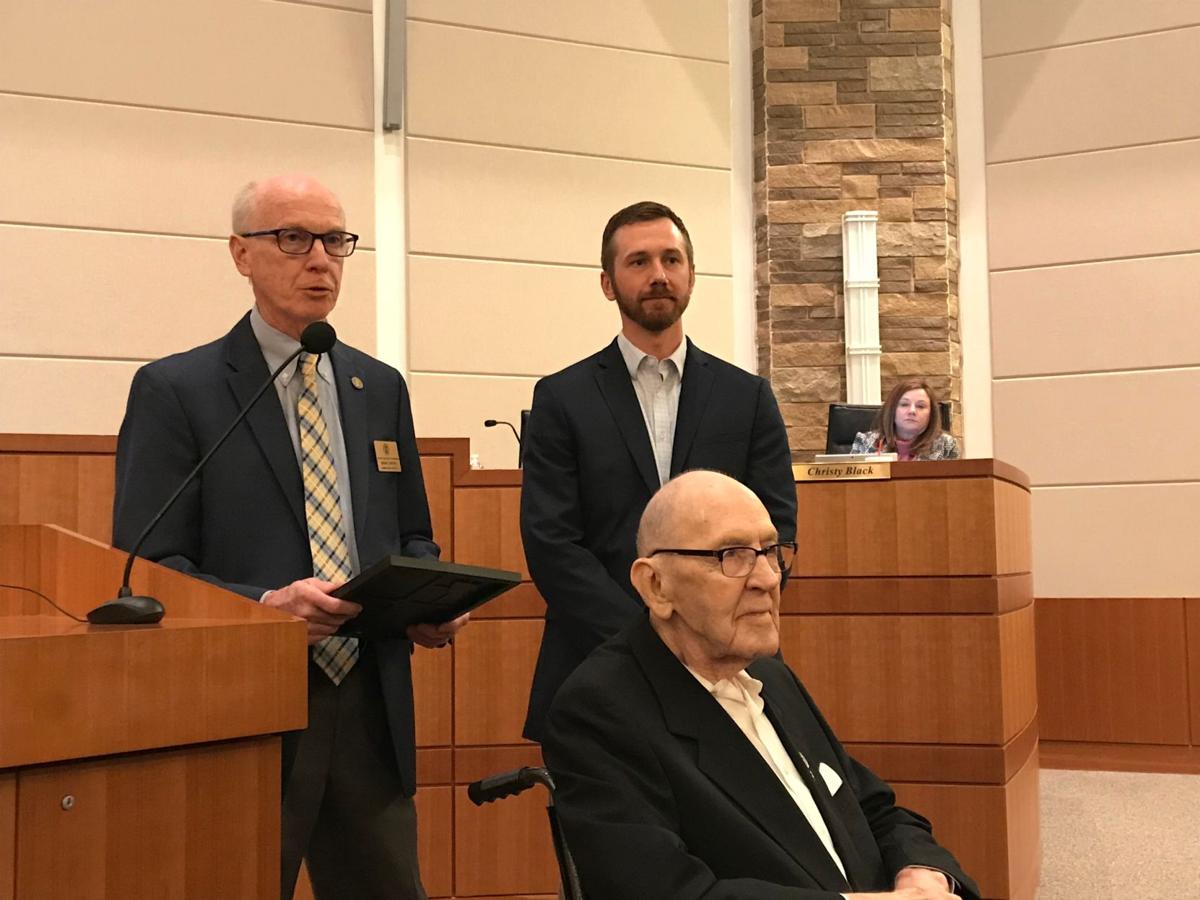 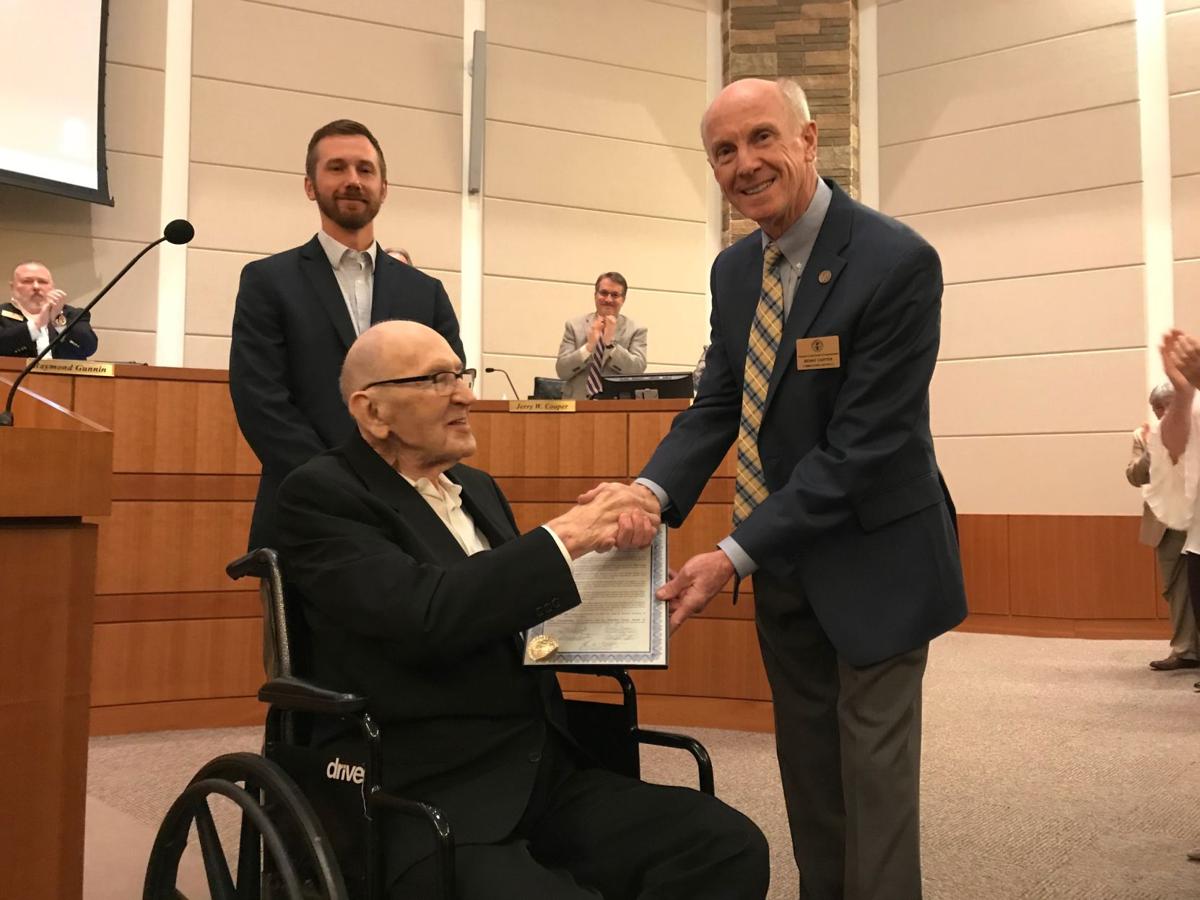 Commissioner Benny Carter, right, presents Couch with a copy of the proclamation read during the board of commissioners meeting. 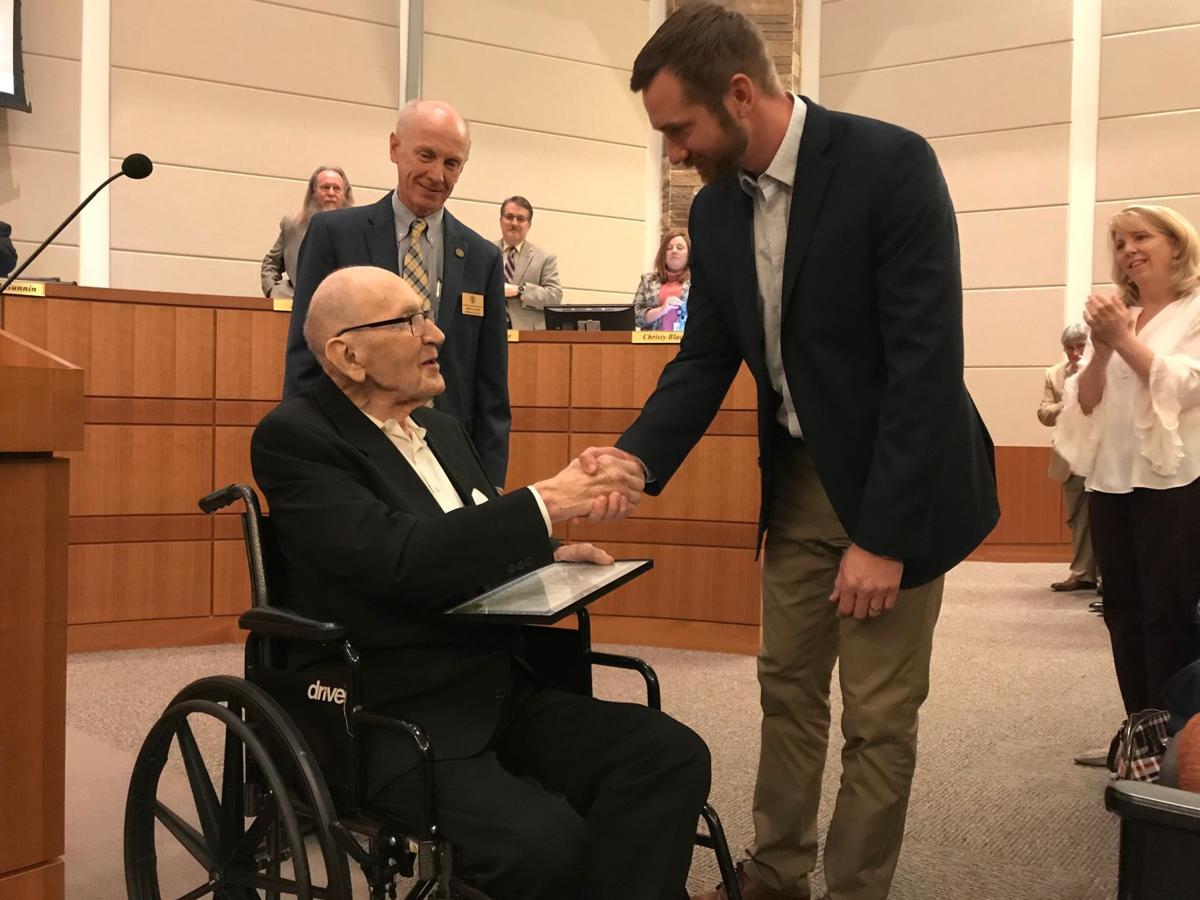 Commissioner Corey Ragsdale, right, thanks Couch for his service during the Second World War.

Commissioner Benny Carter, right, presents Couch with a copy of the proclamation read during the board of commissioners meeting.

Commissioner Corey Ragsdale, right, thanks Couch for his service during the Second World War.

A World War II U.S. Army Air Force veteran from Woodstock who was recently honored by the Cherokee County Board of Commissioners and was rapidly approaching his 100th birthday passed away Saturday morning.

William H. “Bill” Couch, Sr., who was a bombardier on a B-17 Flying Fortress of the 100th Bomb Group that attacked strategic targets in Nazi-held Europe, passed away Saturday morning, less than two weeks shy of turning 100 and a few days after being recognized with a proclamation at the March 3 meeting of the board of commissioners.

At the meeting, commissioners Benny Carter and Corey Ragsdale read the proclamation providing many of the details about Couch’s early life and his service with the Army Air Force during the Second World War before presenting Couch with a copy of the proclamation. After Carter finished reading the proclamation, Couch was honored by everyone in attendance with a standing ovation that echoed around the room. When Couch and his family members were leaving the meeting, he was given a second round of applause.

“Thanks everyone,” Couch said as the applause began to cascade around him again.

Enlisting shortly after the Japanese attack on Pearl Harbor, Couch was accepted as an aviation cadet in January 1942 with the hope of becoming a fighter pilot. However, he eventually found himself training for a different kind of aerial combat.

“There was more disappointment when I failed to make the cut for pilot training and was assigned to Bombardier School instead,” Couch said in an autobiography on a website for the 100th Bomb Group. “My time at Bombardier School passed uneventfully. I thought it was nice to be a 2nd Lt., and wear those coveted silver wings, although they were bombardier’s wings, not pilot’s.”

Upon arriving in the United Kingdom in May 1943, Couch said he found service in the Army Air Force was not as glamorous as he had imagined it to be, but carried out his duties to the best of his abilities. His first mission involved attacking a U-boat pen at Saint-Nazaire, France, which was followed by five more missions against strategic targets of the Nazi war machine. However, Couch’s seventh bombing mission was his last of the war.

On Aug. 17, 1943, Couch’s bomber was part of the massive Army Air Force raids on the German cities of Regensburg and Schweinfurt, with the objectives of destroying the Messerschmitt aircraft production facility in Regensburg and the ball bearing factory in Schweinfurt. Couch’s bomber took part in the raid on Regensburg, but was damaged during the attack and had to crash-land in the Mediterranean off the Italian coast on its way to a landing site in Algeria. After being rescued and subsequently captured by the Germans, Couch was taken to the prison camp of Stalag Luft III. This camp became famous for “The Great Escape” in March 1944, where Allied prisoners attempted a mass breakout from the camp, but only three prisoners successfully escaped, while 50 of the 73 escapees who were recaptured were executed under the direct order of Hitler.

Couch, who did not participate in “The Great Escape,” remained at Stalag Luft III until January 1945, when the Germans forced the Allied prisoners at the camp to participate in a march from the camp, located in modern-day Poland, to Stalag VII-A, situated outside the city of Moosburg in southern Germany, as Soviet forces advanced on Stalag Luft III. By the time Couch and his fellow prisoners were liberated by units of the American Third Army on April 29, 1945, the prisoner population of Stalag VII-A had swelled to approximately 130,000 in a camp built to house 14,000.

“Everyone was up early to greet the liberators,” Couch said of the morning of April 29. “Shortly after daybreak, we heard fighter-bombers doing their work on strafing runs. A few minutes later we heard the crackle of small arms fire, and in less than half an hour, it was all over. It was the thrill of a lifetime to see those GIs come rolling in.”

Visitation for Couch will be held from 5-8 p.m. Thursday at Poole Funeral Home & Cremation Services at 1970 Eagle Drive in Woodstock. Services will be held at 11 a.m. Friday at Poole, with the U.S. Army providing military honors. Inurnment at Georgia National Cemetery will follow at a later date.

Following a day of celebrating America’s veterans, members of the community gathered in solemn remembrance Tuesday as the cremated remains of …

Original Macedonia Church building to be given second life