The city of Woodstock on Tuesday morning became the latest local government to implement operational changes to adapt to the novel coronavirus pandemic.

As of Wednesday there were nine cases of coronavirus infection in Cherokee County, according to the North Georgia Health District.

City “offices are temporarily closed to the public to limit exposure to the COVID-19 virus as city staff continues to serve residents and businesses. A number of online options for interacting with your city government are available and under development,” officials said in a written statement. “Officials are in contact with Georgia Department of Public Health and are consulting the guidelines of other agencies like the CDC in making decisions on cancellations and closures.”

“We appreciate the public’s patience,” City Manager Jeff Moon said. “We’ll do our best to continue to provide timely and accurate information on local events related to the COVID-19 outbreak.”

The city’s public works department has been sanitizing public buildings and will do the same at facilities — including playground equipment — at city parks, officials said Tuesday.

According to a news release from the city:

Next Monday’s City Council meeting has been canceled, as is the April 2 Planning Commission meeting. The April Downtown Development Authority meeting has also been canceled. A public input meeting on Neese Road improvements scheduled for Tuesday has been postponed.

Woodstock Police Department’s Coffee with a Cop at Chick-fil-a set for Wednesday is canceled, as is the remaining sessions of the Citizens Public Safety Academy is cancelled. All Police Auxiliary Unit duties are suspended until further notice, city officials said.

For non-emergency issues, people should call the Woodstock Police Department at (678) 493-4080. Police reports can be found and downloaded for a fee on the website https://buycrash.com/. For police records questions call (770) 592-6030 Option 7 or email policerecords@woodstockga.gov.

Woodstock Municipal Court has also made schedule changes, including:

♦ March 23 court session will be rescheduled to May 11;

♦ March 30 court session will be rescheduled to May 11;

♦ April 6 court session will be closed out and rescheduled to May 18;

♦ April 27 trial session will be decided by the end of March.

For other Municipal Court questions and assistance, call 770-592-6030 Option 7 or email court@woodstockga.gov.

Read the entire release below. 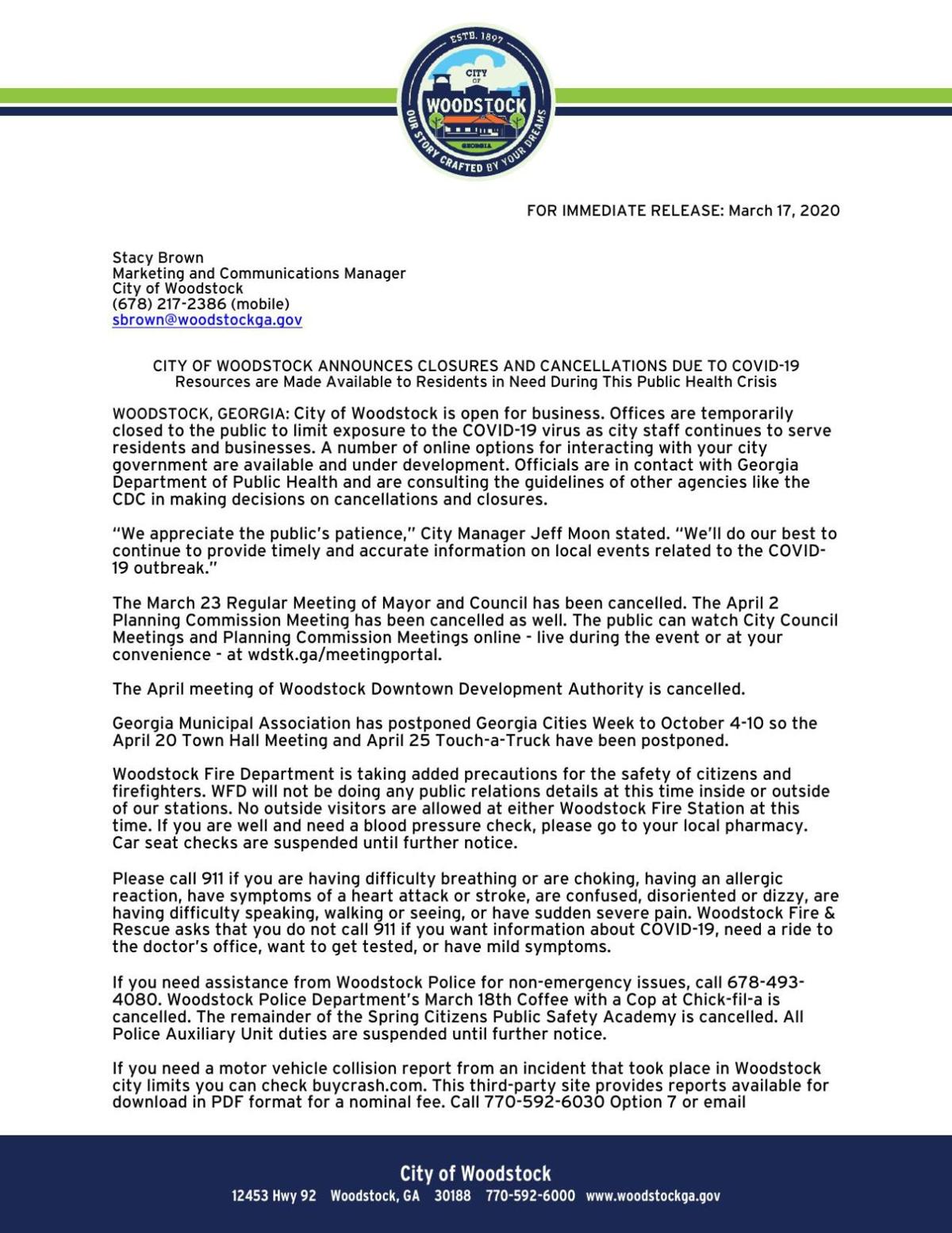 Along with shift in presidential primary date, changes to local candidate forums made

Georgia’s presidential primary is moving because of the coronavirus pandemic to May 19 when other elections were already scheduled. And, Chero…

With the novel coronavirus disease COVID-19 escalating to a national state of emergency, many planned events and public gatherings have either…

One confirmed case of COVID-19 and three presumptive cases have been reported at an assisted living facility in Cherokee County.