Call to the wild: Great outdoors an escape in t…

Visa extends athlete sponsorship to 2021 after … 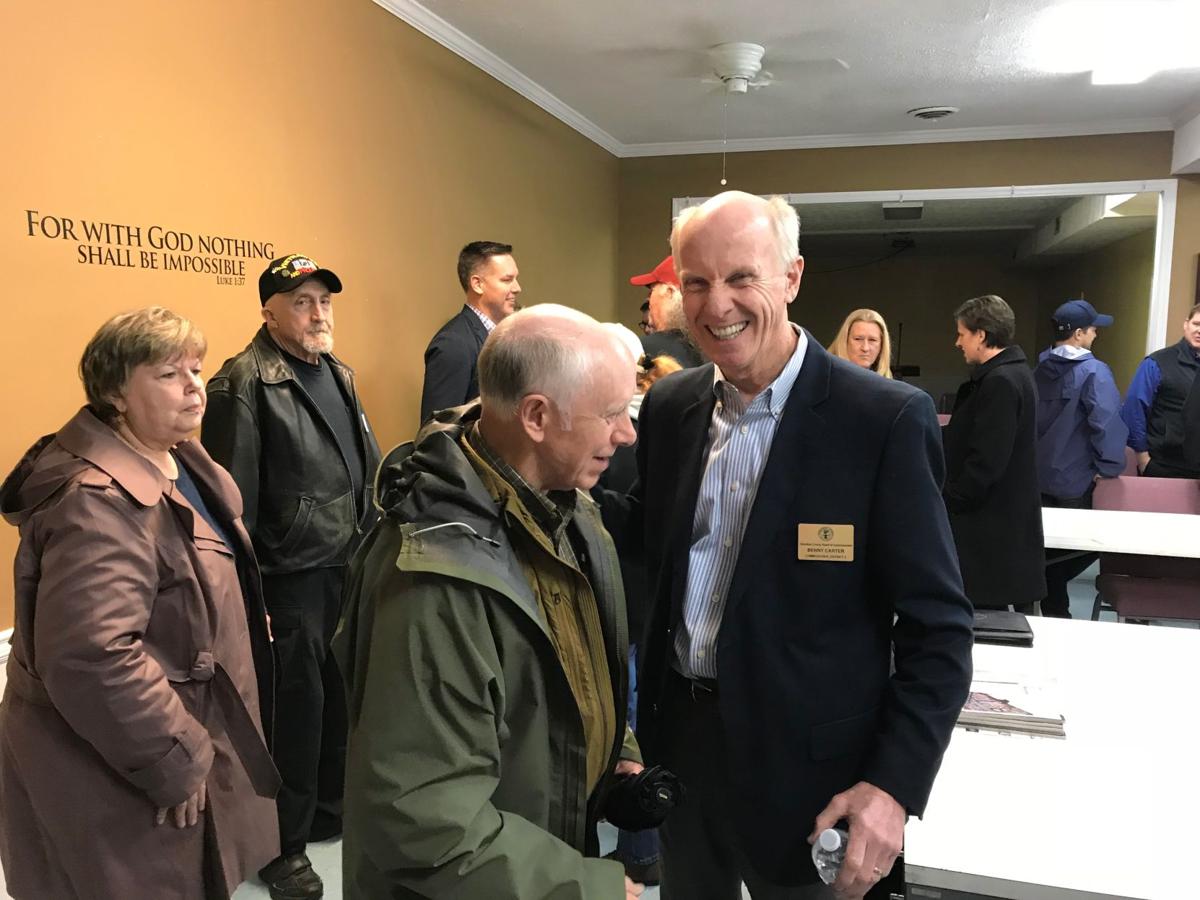 District 3 Commissioner Benny Carter shares a laugh while conversing with one of his constituents after Monday night’s town hall meeting. 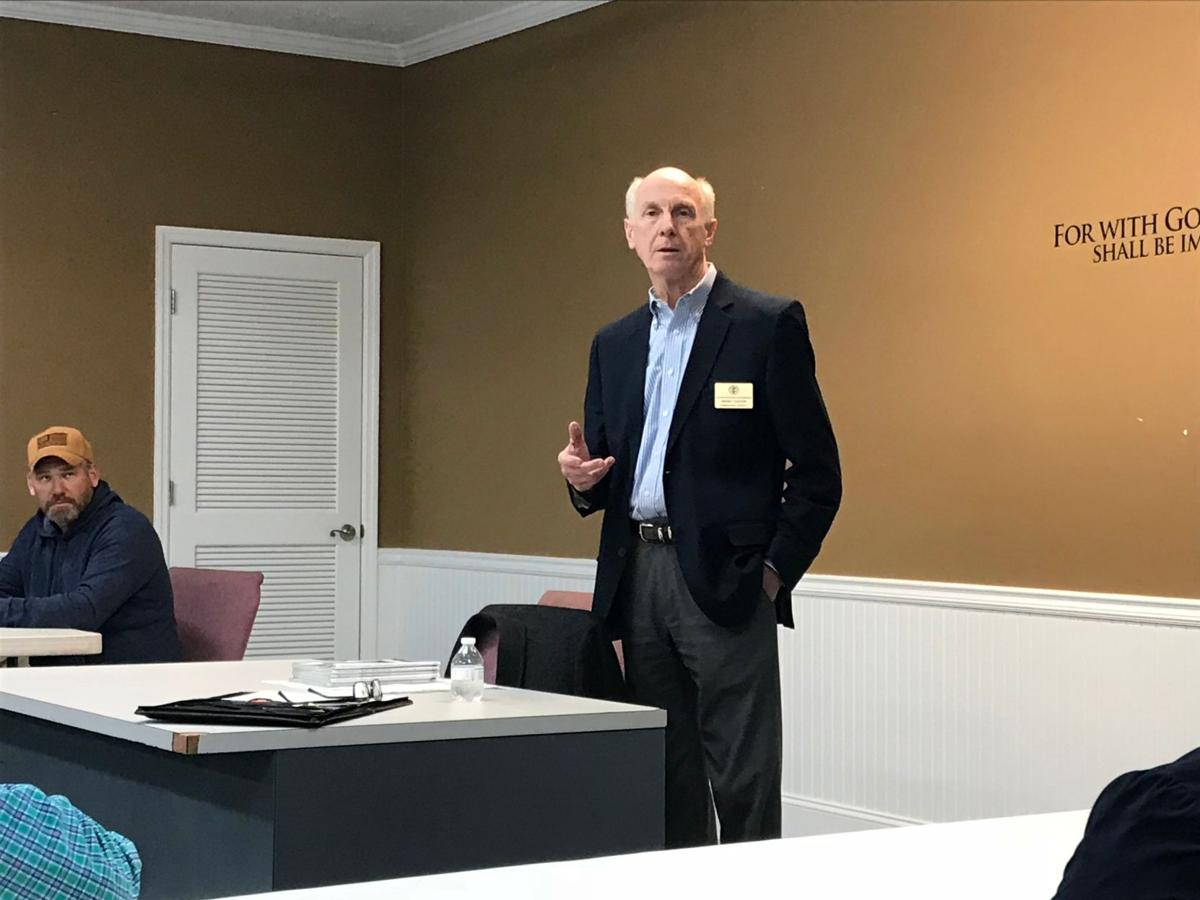 Cherokee County Board of Commissioners District 3 Commissioner Benny Carter provides some of the latest updates on projects taking place across the county at Monday night’s town hall meeting at Sutallee Baptist Church. 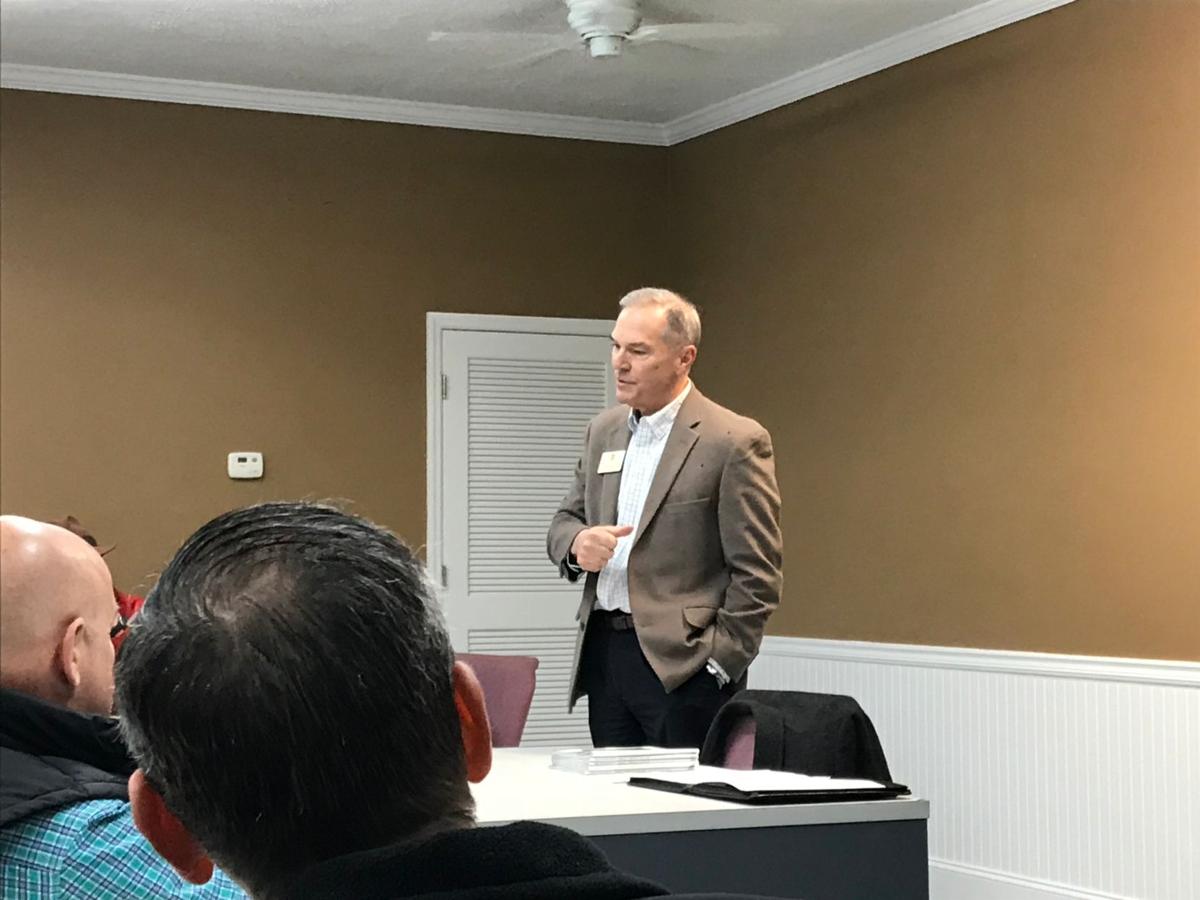 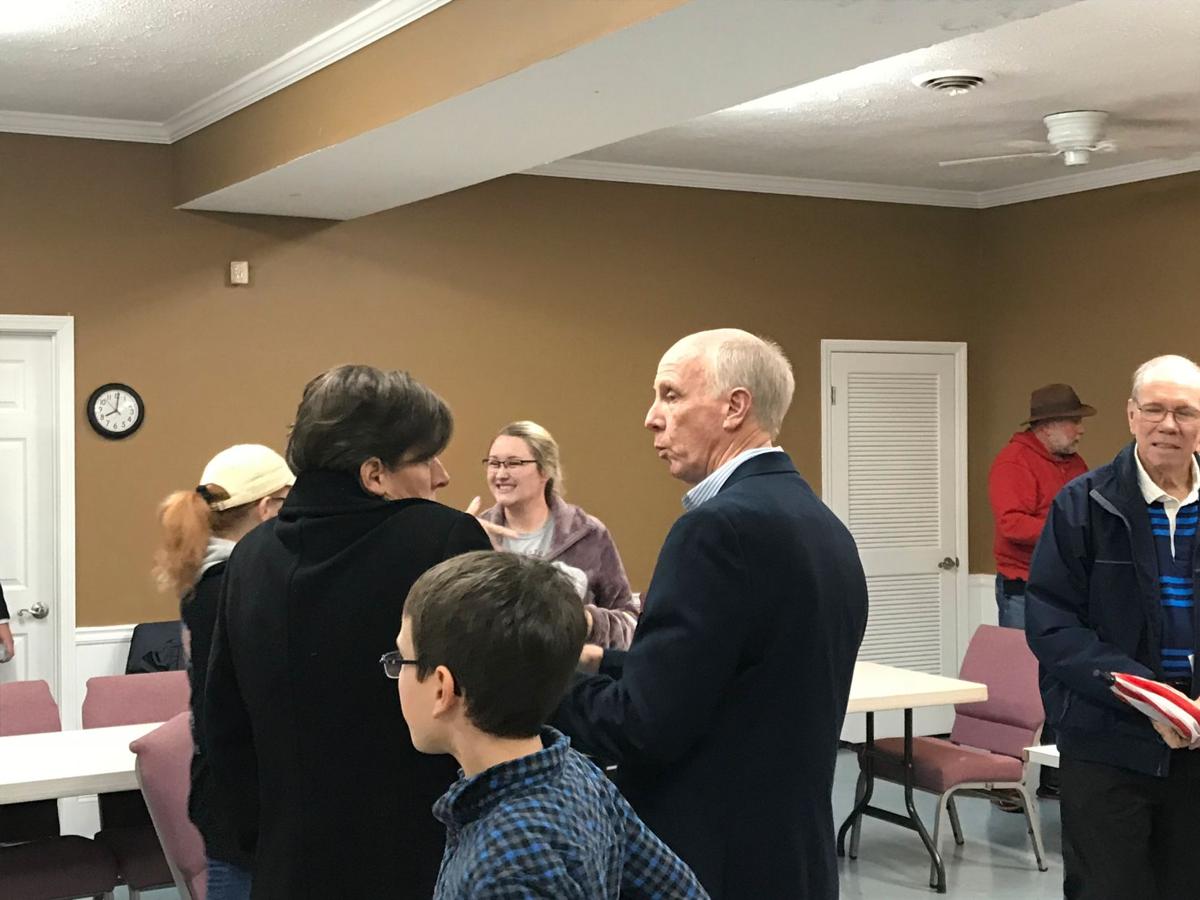 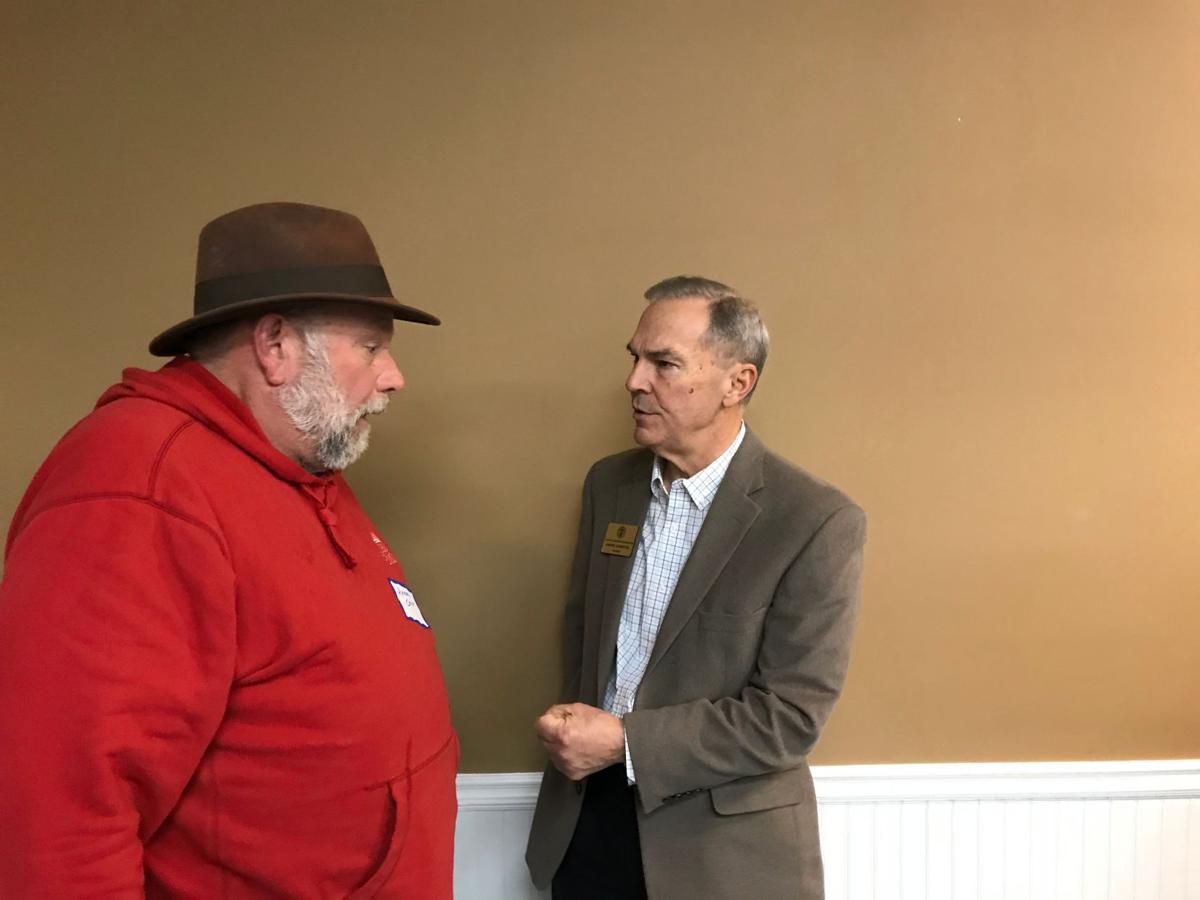 District 3 Commissioner Benny Carter shares a laugh while conversing with one of his constituents after Monday night’s town hall meeting.

Cherokee County Board of Commissioners District 3 Commissioner Benny Carter provides some of the latest updates on projects taking place across the county at Monday night’s town hall meeting at Sutallee Baptist Church.

Over 90 minutes, Johnston and Carter provided attendees with updates about the latest goings-on in the county, while also answering questions about issues and concerns the residents had.

During his updates, Carter said the county was in the middle of its housing study to have concrete information about housing in the area and encouraged everyone attending to go to the county website and take the survey there.

On transportation, he said work to widen Georgia Highway 20 between Canton and the Forsyth County line would hopefully begin this year, while the project to widen Bells Ferry Road is moving forward with right-of-way acquisition. Although the Georgia Department of Transportation has said that the widening of Georgia Highway 140 is not scheduled to begin until the 2030s, the county is moving forward with interim projects that could improve traffic flow before that.

As a way to potentially get some projects moving, Carter said he and other county officials were looking at planning a meeting with GDOT officials to give them a tour of Cherokee County to better illustrate where the county is and what is in need of improvement.

Johnston then spoke about additional issues, including the concern the county has fallen behind other counties in the metro area in terms of salaries for employees and a potential need to reduce county employee benefits.

In addition, Johnston mentioned GDOT has been exploring both widening and installing roundabouts on Highway 20 between Canton and Bartow County, while another concern regularly on his mind is the lack of a sewer system west of Knox Bridge.

Attendees even heard from Sheriff Frank Reynolds for a moment, who touched on the matter of public safety. When Carter mentioned the jail expansion project, Reynolds said it was moving along rather quickly, with the current completion date being some time in December. Reynolds also said the Cherokee Sheriff’s Office was proud to have a good working relationship with the board of commissioners.

During the question portion of the meeting, attendees wanted updates on the proposed 500-acre veteran focused residential development next to Georgia National Cemetery. Carter and Johnston said they had heard nothing from the developer wanting to put in the veteran-focused community at the cemetery since his public input meeting in late August.

Residents asked if there were roundabouts planned for Highway 20 east of Canton.

Since GDOT is looking to widen Highway 20 from Interstate 575 to Forsyth County from two lanes to six, Johnston and Carter said they were not sure if roundabouts would be used.

In response to a question about getting a tornado siren in the Sutallee community, Johnston said that is one thing the board of commissioners can do, while Carter said he made a note of it and would look into it. Johnston said a combined plan between the county and all of its cities was the biggest thing standing in the way of responsible growth after being asked about annexation issues. When asked about the county’s land use plan, Johnston said it can be found on the county’s website and is open to review from anyone.

Attendees also had questions for Reynolds, primarily regarding coverage of the area by the sheriff’s office. Reynolds said the largest precinct is Waleska, which covers the Sutallee area, and that the average response time is somewhat higher there than in other precincts, but there is a plan for improving this. Johnston helped elaborate, mentioning how the county and sheriff’s office are looking into the possibility of a sixth precinct to be based near Ball Ground that would reduce the area covered by the Waleska and Free Home precincts.

After the town hall, Carter and Johnston both said they felt the meeting had gone very well. Johnston said he learned just how much of a wide difference of opinion residents in the area have regarding future development.

Carter added the input he heard confirmed that transportation is a key issue in the area, while residents want a sound plan for the future.

Board of commissioners acts on four zoning cases

The expansion of the Cherokee County jail is on schedule, according to county officials and representatives from the Cherokee Sheriff’s Office.