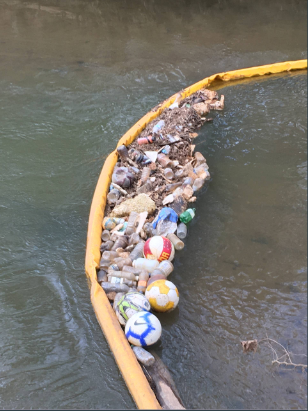 The Lake Allatoona Association installed a trash boom on Noonday Creek and, during a six-month period between Sept. 1 and Feb. 28, nearly 850 pounds of trash were removed from the waterway. 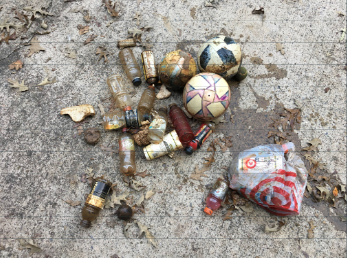 Among the items removed from the trash boom were plastic bottles, soccer and tennis balls, and plastic bags.

The Lake Allatoona Association installed a trash boom on Noonday Creek and, during a six-month period between Sept. 1 and Feb. 28, nearly 850 pounds of trash were removed from the waterway.

Among the items removed from the trash boom were plastic bottles, soccer and tennis balls, and plastic bags.

Representatives from the Lake Allatoona Association are hoping the city of Woodstock will take action to help contain trash getting into the lake, after collections from a six-month study yielded hundreds of pounds of trash from Noonday Creek.

A study conducted between Sept. 1 and Feb. 28 found a sizable amount of trash that flows into Lake Allatoona comes from Noonday Creek, Lisa Hartsfield and Craig Myers told the Woodstock City Council Monday.

The organization placed a temporary trash boom, a floating barrier to contain trash, on the creek, which kept the trash from flowing further downstream, while volunteers would make regular visits to the boom and remove the collected trash from Noonday Creek during the study. Over the course of the study, a total of around 850 pounds of trash was removed from the waterway. Items pulled from the boom included 588 plastic bottles, a variety of soccer and tennis balls, Styrofoam objects, shoes, building materials and plastic bags. However, there was trash that had been caught in the boom while the creek level was higher, but had become dislodged and made it into the lake when the levels went down before being removed from the boom. These trash items were not included in the numbers collected through the study.

“This is a small part of a large project,” Myers said.

Based on the findings from the study, Hartsfield and Myers recommended the purchase of an improved boom system on Noonday Creek, one with a higher barrier to reduce the amount of trash getting past the boom when creek levels rise and would cost about $5,000. Hartsfield and Myers said the Lake Allatoona Association was willing to work with the city to help obtain installation materials from some of its partnering marinas and would get some of its volunteers to help city workers install the new boom.

Council members did not formally approve the new boom system, but did express the desire in having it included in next fiscal year’s budget.

“I would be very interested in this,” Councilman David Potts said.

Mountain High Outfitters has expanded, relocating to a bigger 3,400-square-foot space between Carter’s and Perfumania at The Outlet Shoppes at…

Gov. Brian Kemp will be the keynote speaker at the Cherokee Chamber of Commerce’s annual meeting May 12.

A Woodstock man faces multiple counts of child molestation after authorities say he abused a boy under 16 while the boy was visiting a relative.

Pizza fans in Woodstock have the opportunity to enjoy some free pizza in the next few days as Your Pie arrives in town.

Seems to me that there is a generation of 'athletes' who have regard for our parks. I see this at multiple parks. I pick up softballs and baseballs continually and then the trash left by not only children but by the adults'(mini liquor bottles recently) is very disheartening. We can do better people.....we have too~