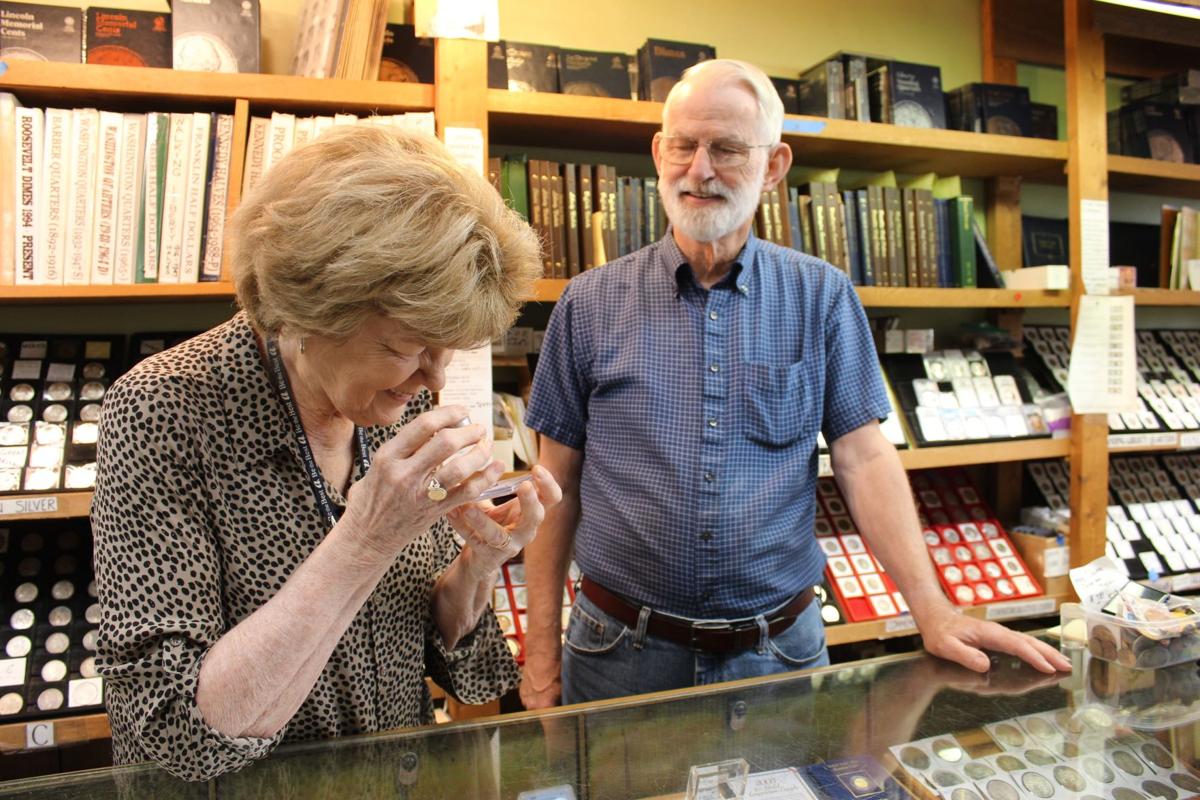 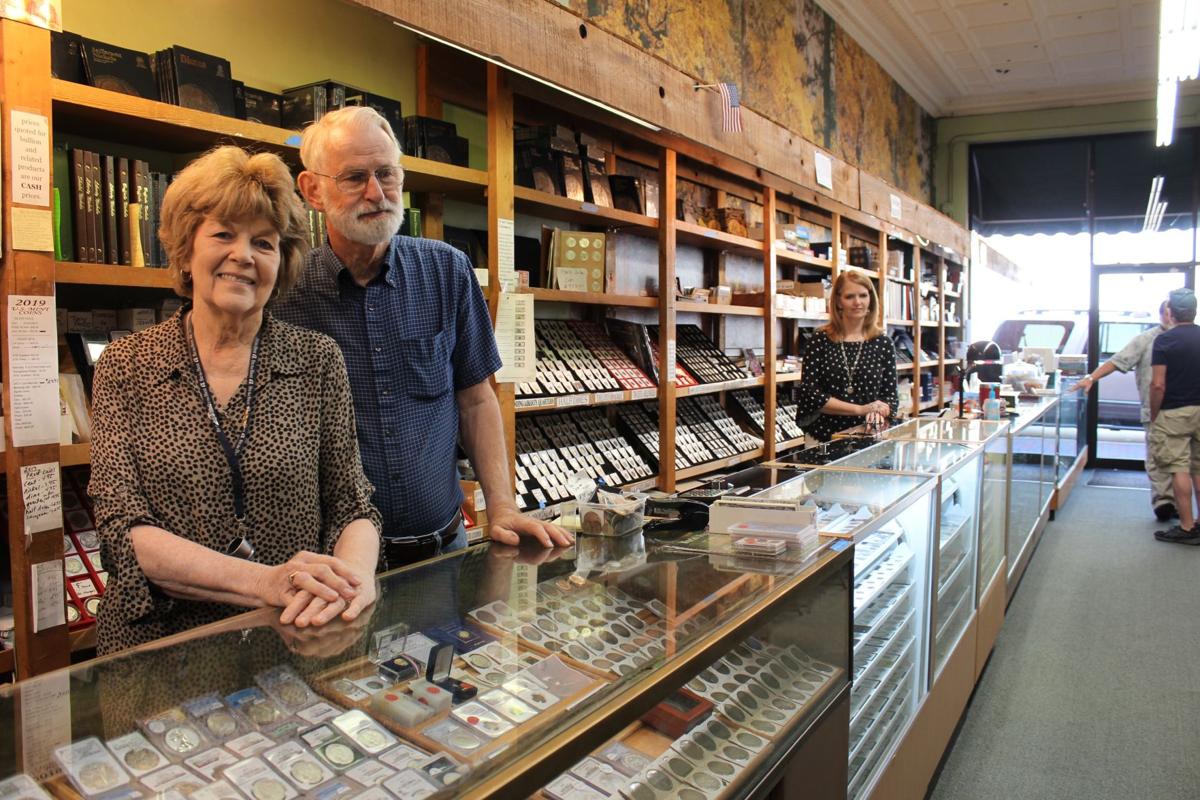 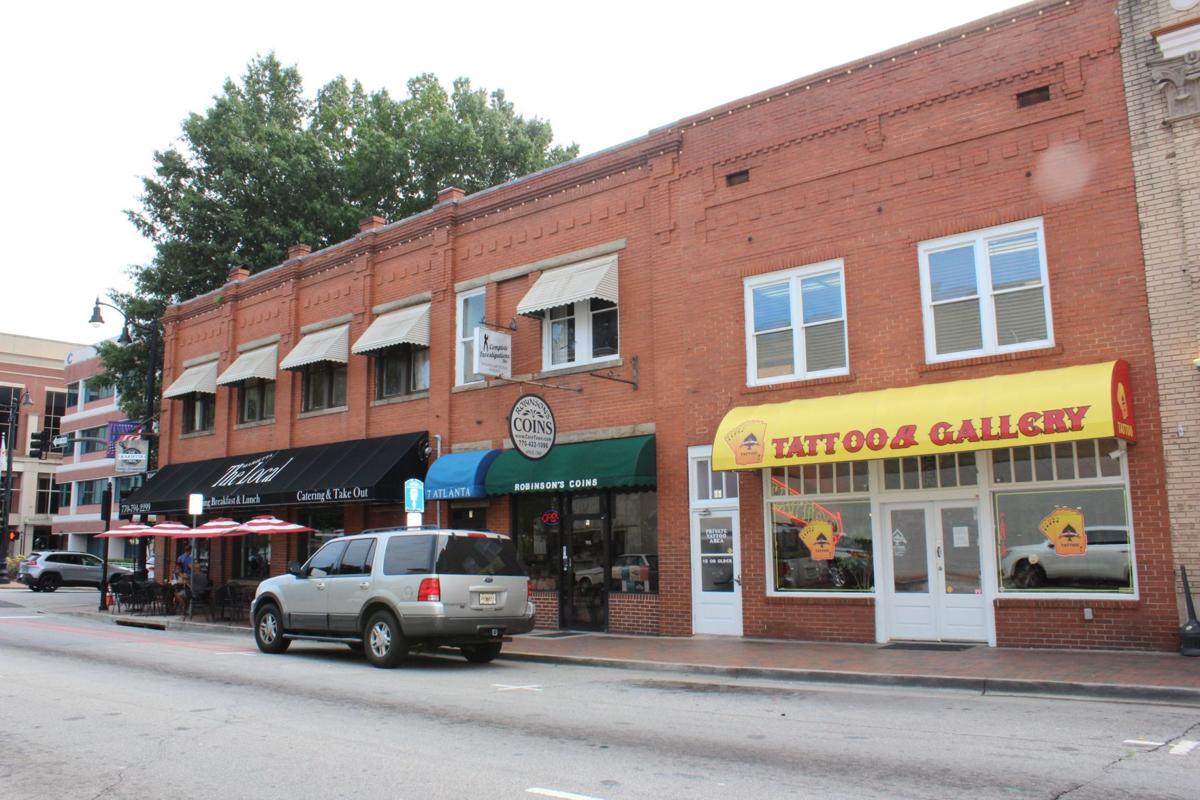 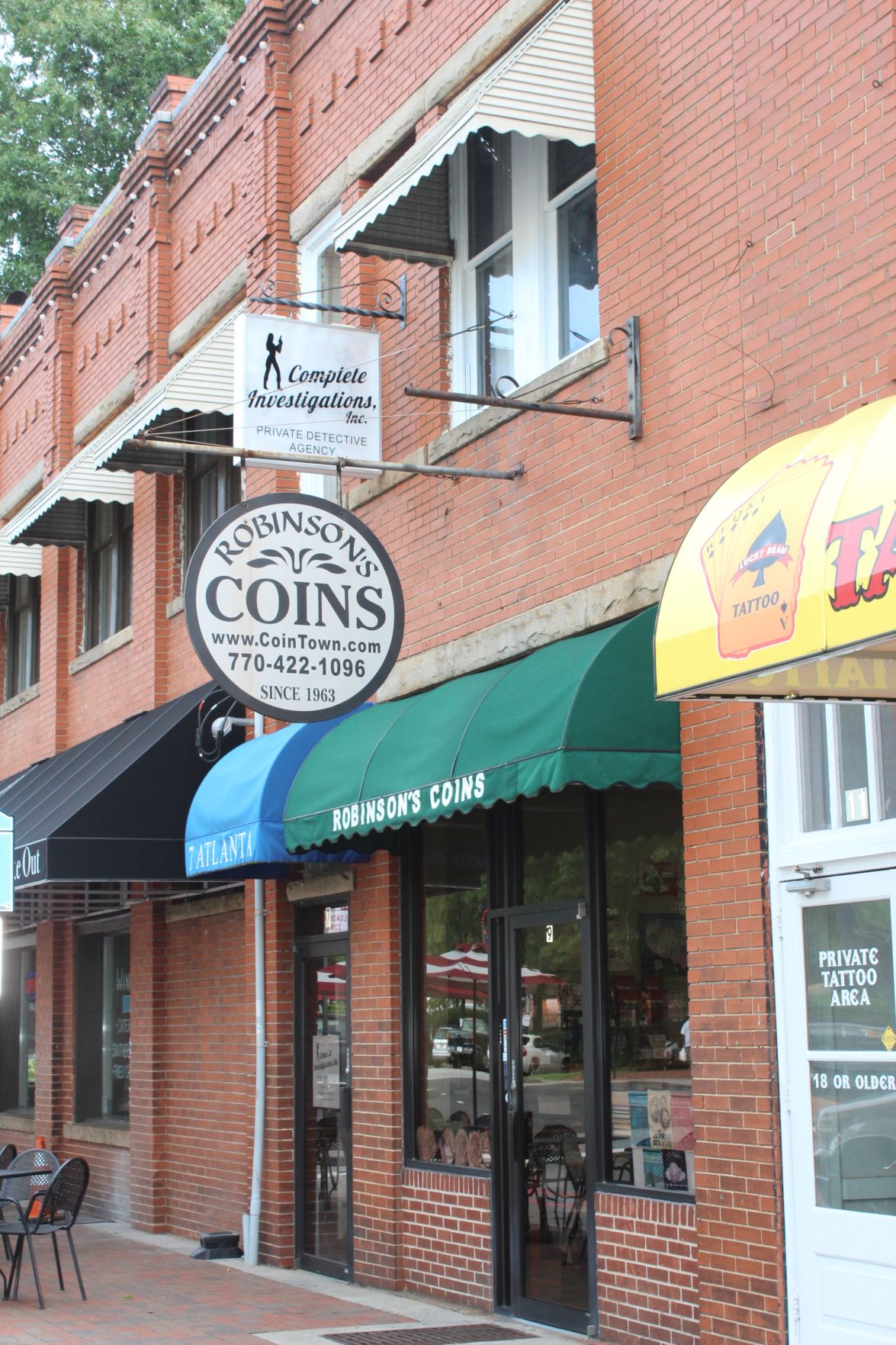 Robinson’s Coins is shown in the last of three Marietta Square locations it has occupied over the past 56 years. 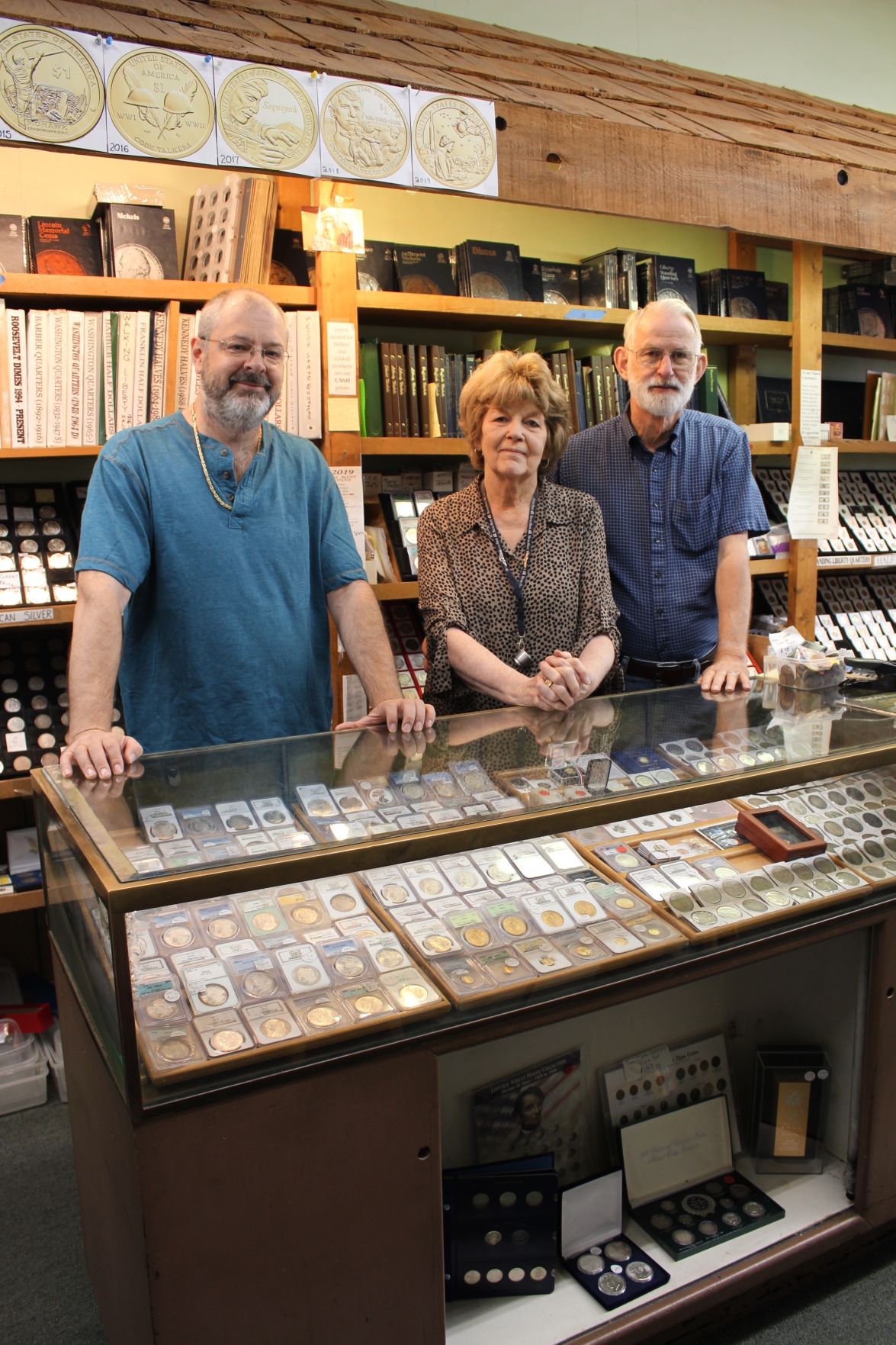 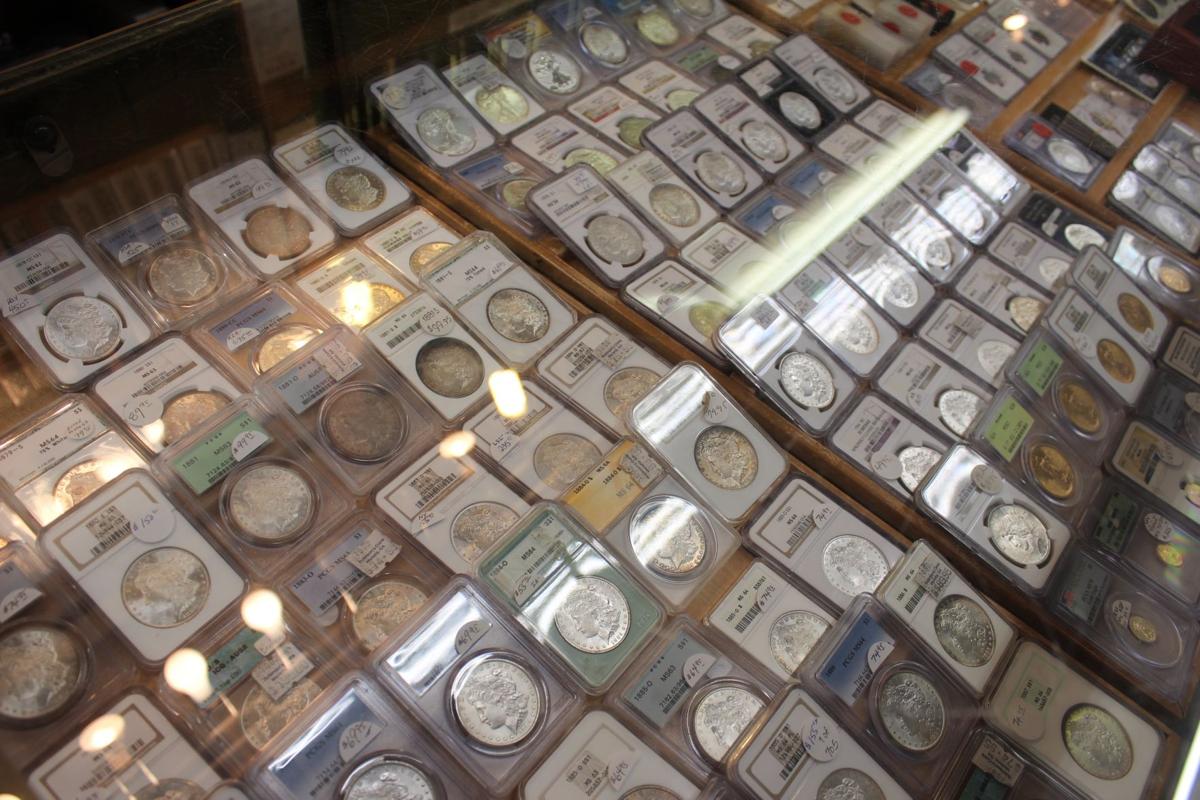 Robinson’s Coins offers a wide variety of collector’s items, including these coins.

Robinson’s Coins is shown in the last of three Marietta Square locations it has occupied over the past 56 years.

Robinson’s Coins offers a wide variety of collector’s items, including these coins.

MARIETTA — For just over 56 years, members of the Robinson family have welcomed customers into their Cobb County coin shop, but the business is changing hands this month for the very first time.

Robinson’s Coins opened in its current location, at 9 Atlanta St. off Marietta Square, in 1972.

Started in early 1963 by Benny Robinson and his father, Bruce Robinson, the business was first part of the old Town and Country Shopping Center on Roswell Road.

The Robinsons initially had just one small counter in the back of a pet shop from which to sell their silver and gold. Now that same counter is one of many in the current shop filled with collectible coins and paraphernalia from all over the world dating back to the third century B.C.

Standing behind that counter, with its squeaking drawers that have become so familiar, the Robinsons were feeling a mix of emotions this week.

Benny and Sue Robinson, who married in 1963 — around the time the business occupied its first of three Marietta Square locations — raised their three children in and around the shop.

Their daughters, Beth Dolan and Cindy Steed, fondly remember being dropped off at the store by the school bus and spending afternoons traipsing in and out as they explored the Square and its offerings.

“It’s a strange feeling, but it’s time,” Sue Robinson told the MDJ on Wednesday as she helped her husband complete their final stock inventory. “We’ve enjoyed it and hopefully it will continue to work out and be a great success.”

The husband and wife, now in their seventies, are selling the business and majority of assets to east Cobb resident Mark Thompson, a wholesale coin dealer and the owner of Worldwide Coin and Currency Inc.

He plans to keep the business name, sign, phone number and character unchanged.

“They are an institution,” Thompson said of the Robinsons. “One of my best friends now was coming here when he was 6.”

The store’s full-time employee, Chip Cutliff, and a couple of part-time workers will keep their jobs after the ownership change, which should be completed by the end of the month following final inventory negotiations.

Over the past few years, the Robinsons have cut down their store’s opening hours to just four days a week, and now a full retirement with time to travel and read on the porch beckons.

“Just about every member of our family has helped us run it at different times,” Benny Robinson said, including his mother, Pauline Robinson.

Over the years, the family added and dropped services around its core coin business, running telegraphs at one point and operating as a Western Union agent until the work was computerized.

That’s how the business stayed afloat through decades of economic change and rising rent, Sue Robinson said, adding that the store’s lease was less than $100 a month when it first opened on the Square.

“We never wanted to just sell out and not have a coin shop here, we’re just sentimental that way, and we didn’t want to leave it for the kids just to have to figure it all out,” she said.

Now living in Bartow County, the Robinsons say there are too many items in their store to count, but the number would be in the hundreds of thousands.

The oldest of the Robinsons’ countless U.S. silver dollars is from 1860, and there are many other coins from that time for sale, including three- and two-cent nickels, discontinued generations ago.

The most popular items tend to be silver dollars and Lincoln cents, Robinson said.

Collectible items such as state quarters and presidential dollars, released in limited batches, have also helped keep customers interested, she said, pointing to a 1925 Stone Mountain half-dollar coin minted that year only.

Robinson’s also has large one cent coins, bigger than quarters, which were issued until 1858.

“We have a lot of longtime customers, some that come in every day looking to see what new things we have bought in. Others come in every week, as we’re constantly buying new things,” Sue Robinson said.

The Robinsons try to offer something for everyone, selling cheap items that children can start collections with to $3,000 rarities for serious buyers, such as a doubled die 1955 penny showing two overlapping sets of marks.

“If kids get into coin collecting at a young age, they learn a lot of history that most don’t know about,” Sue Robinson said. “People are wanting to make sets, some people collect everything and some specialize.”

She says many collectors do not want clean coins, preferring the authentic dullness of old currency.

“Some people shine their coins up before they come in to sell them, but they shouldn’t; it affects their value.”

In their five decades on Marietta Square, the Robinsons have seen almost every other business come and go from the town center and say the influx of tourists means shops don’t stay empty as long as they used to.

Thompson says he plans to develop another location, about a mile from Marietta Square, for the wholesale side of his business, but Robinson’s Coins will remain as it is.

“Our goal is not to screw it up,” he said, adding that he’s both excited and nervous about owning the business in conjunction with a silent partner who prefers to stay anonymous.

“We’re really impressed with what’s been happening with Marietta Square and we want to be a part of that and be a good neighbor here.”