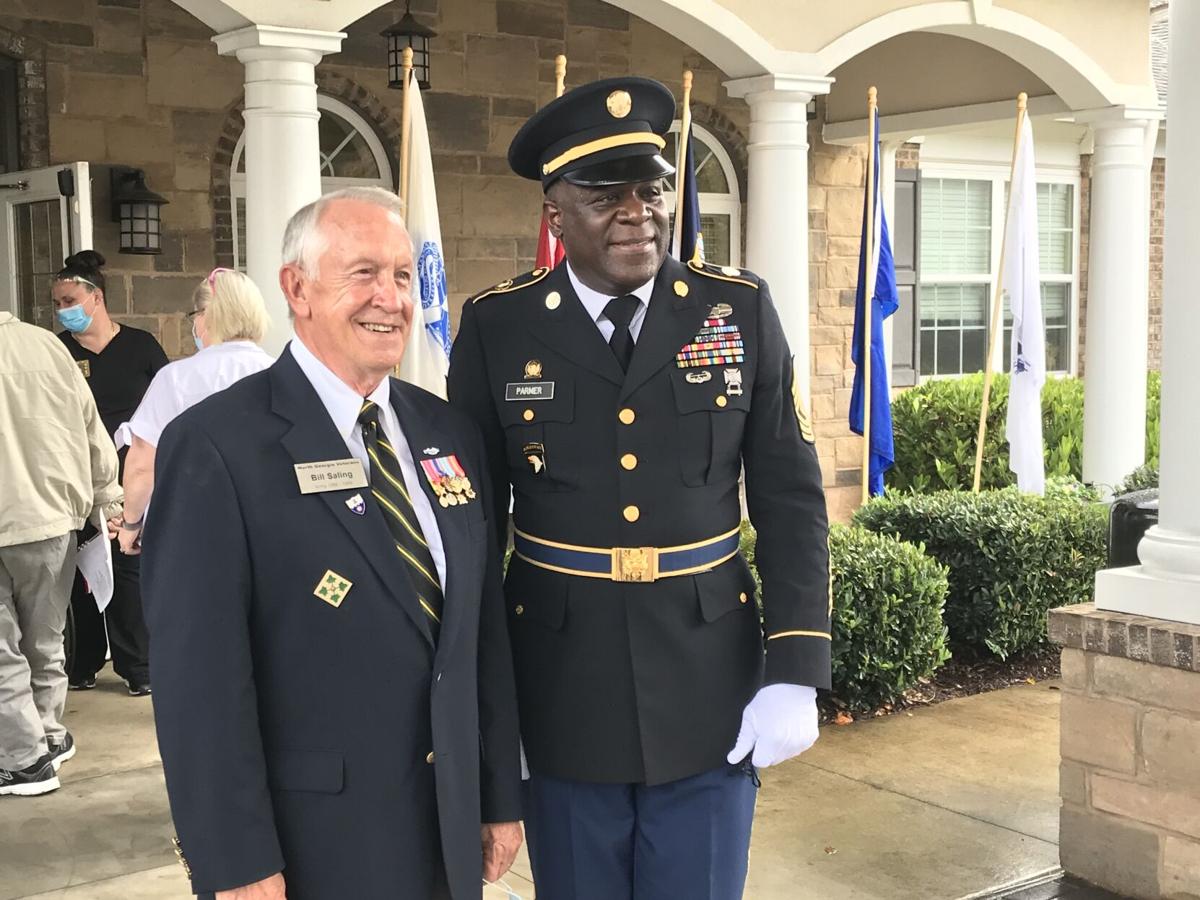 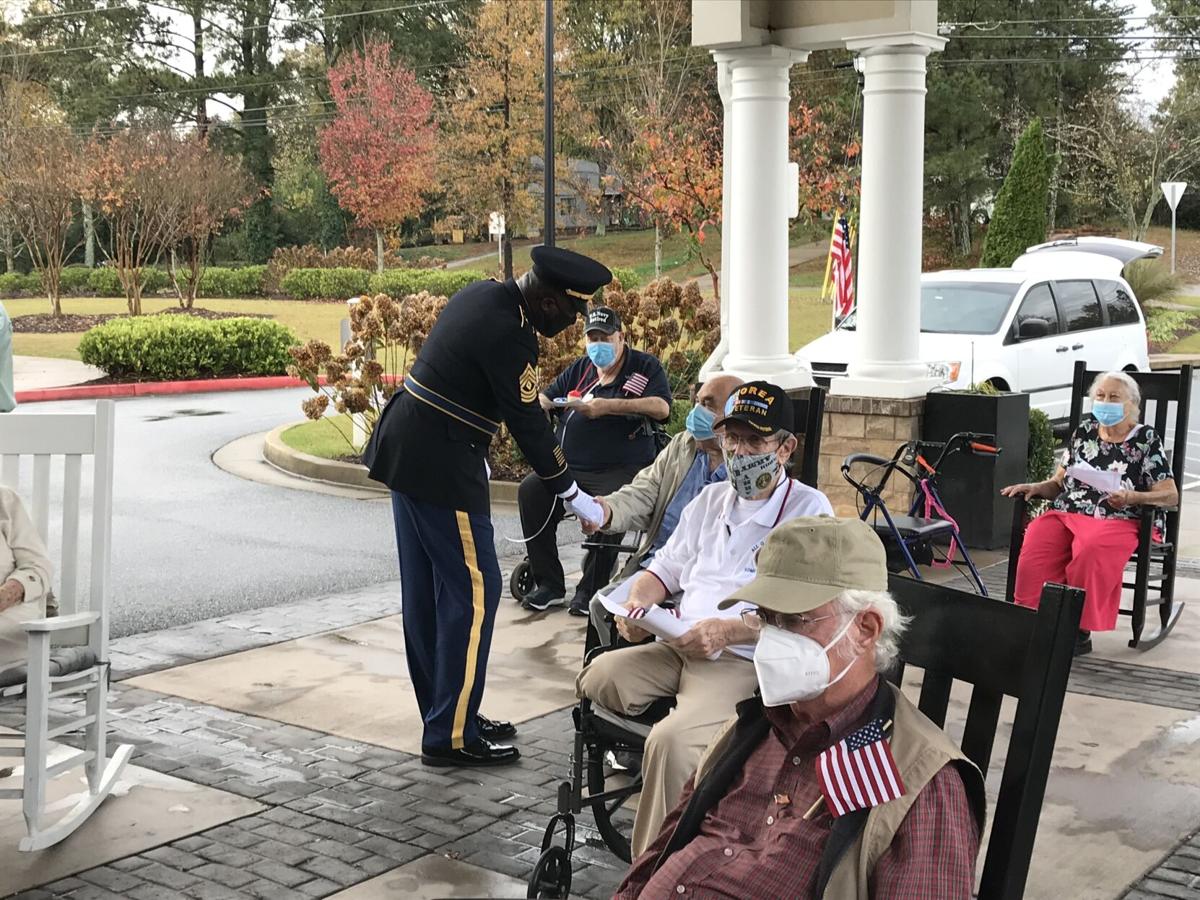 Parmer meets with the veterans residing at Benton House, personally thanking them for their service following the ceremony. 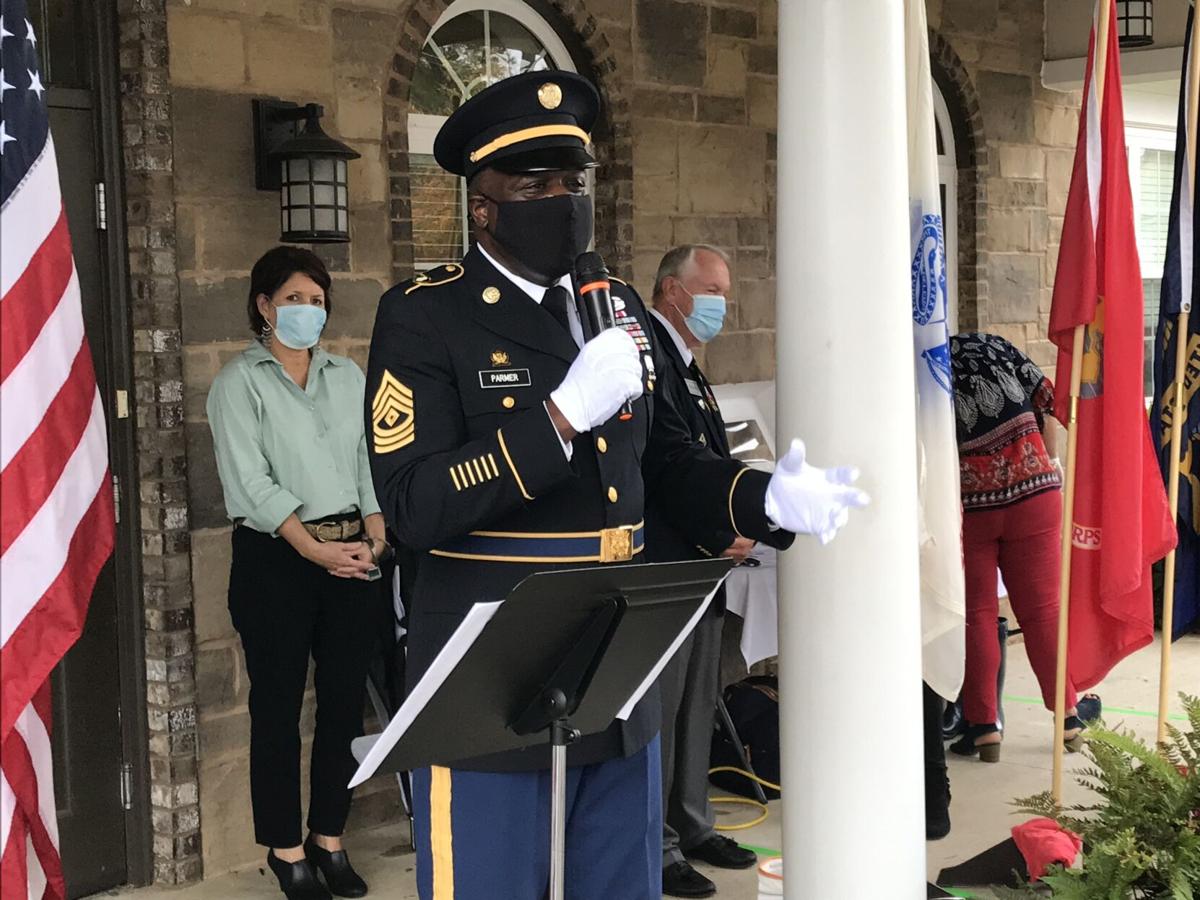 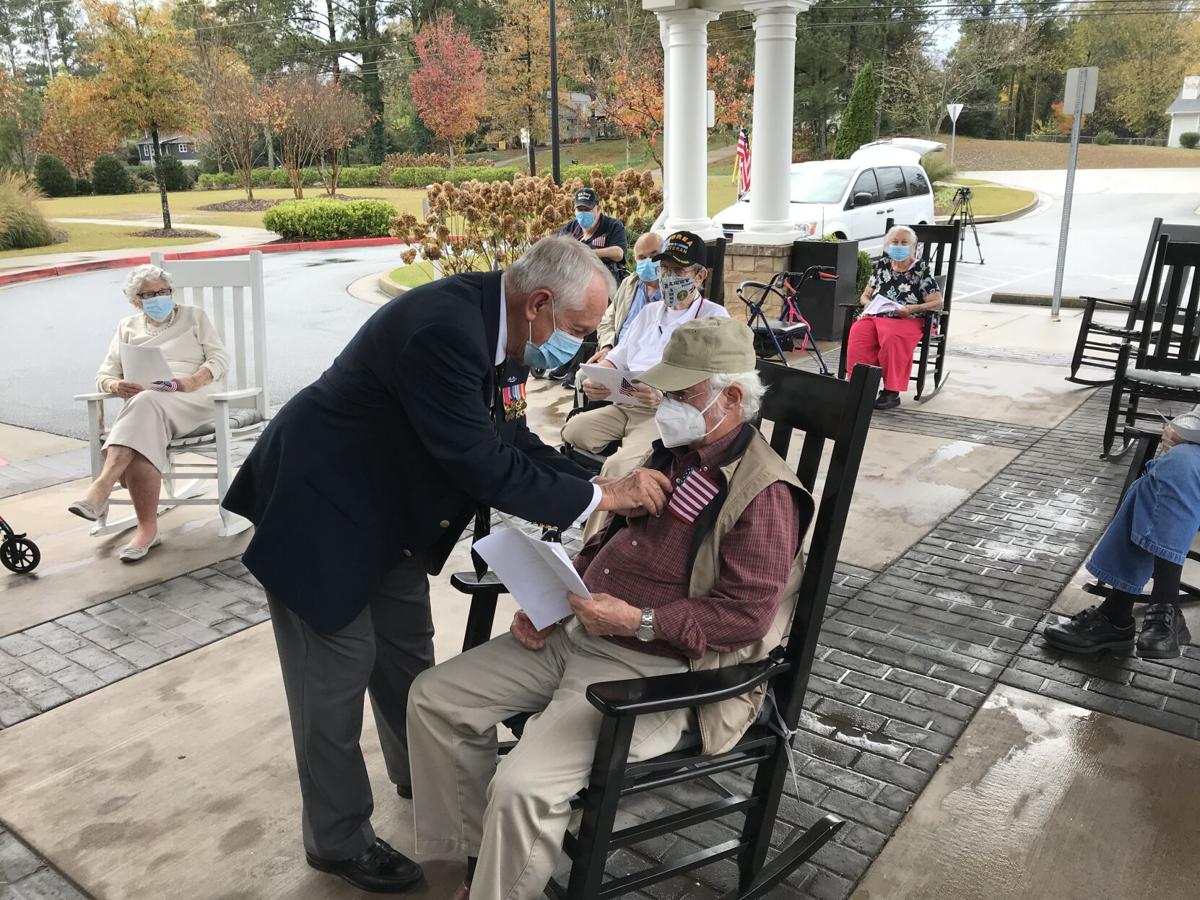 Thanking him for his service, Saling pins veteran Walter Lemke with an American flag lapel pin. 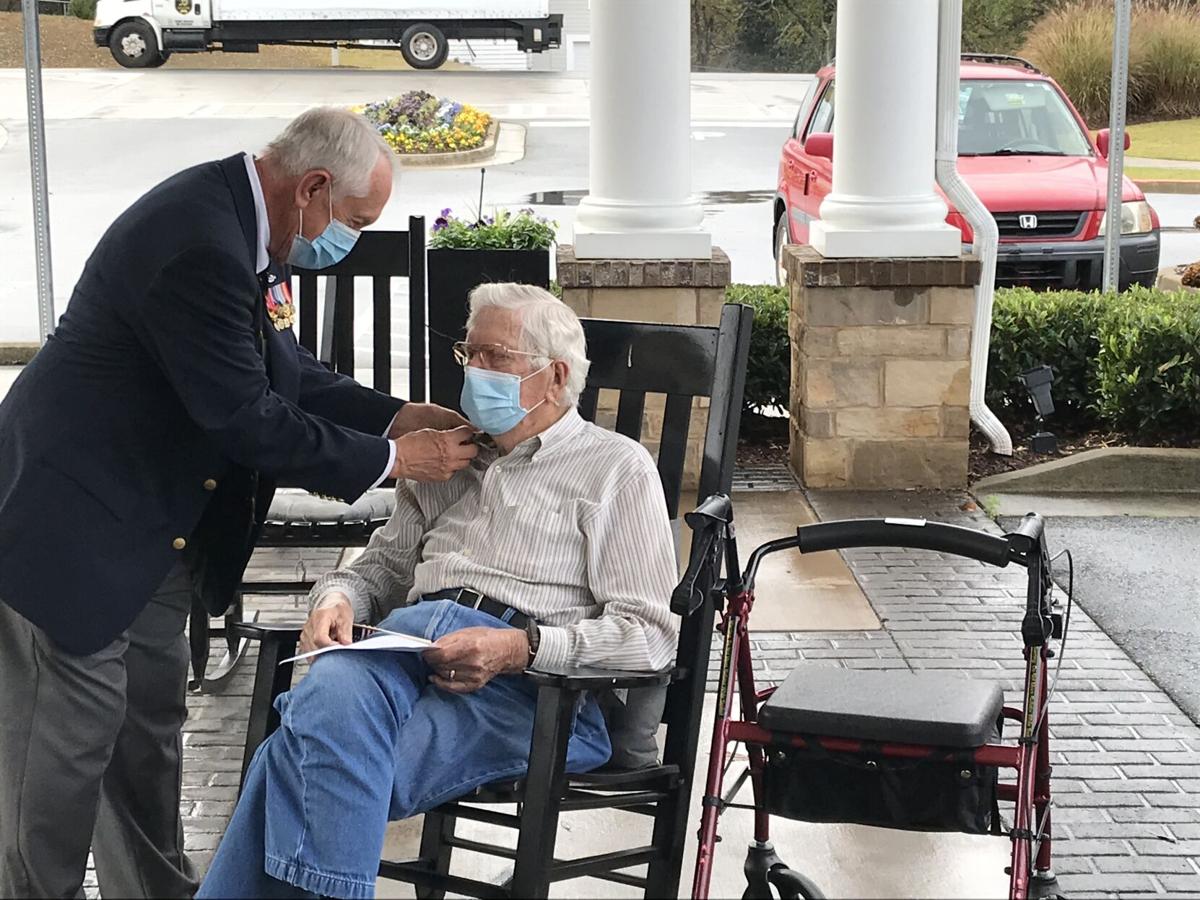 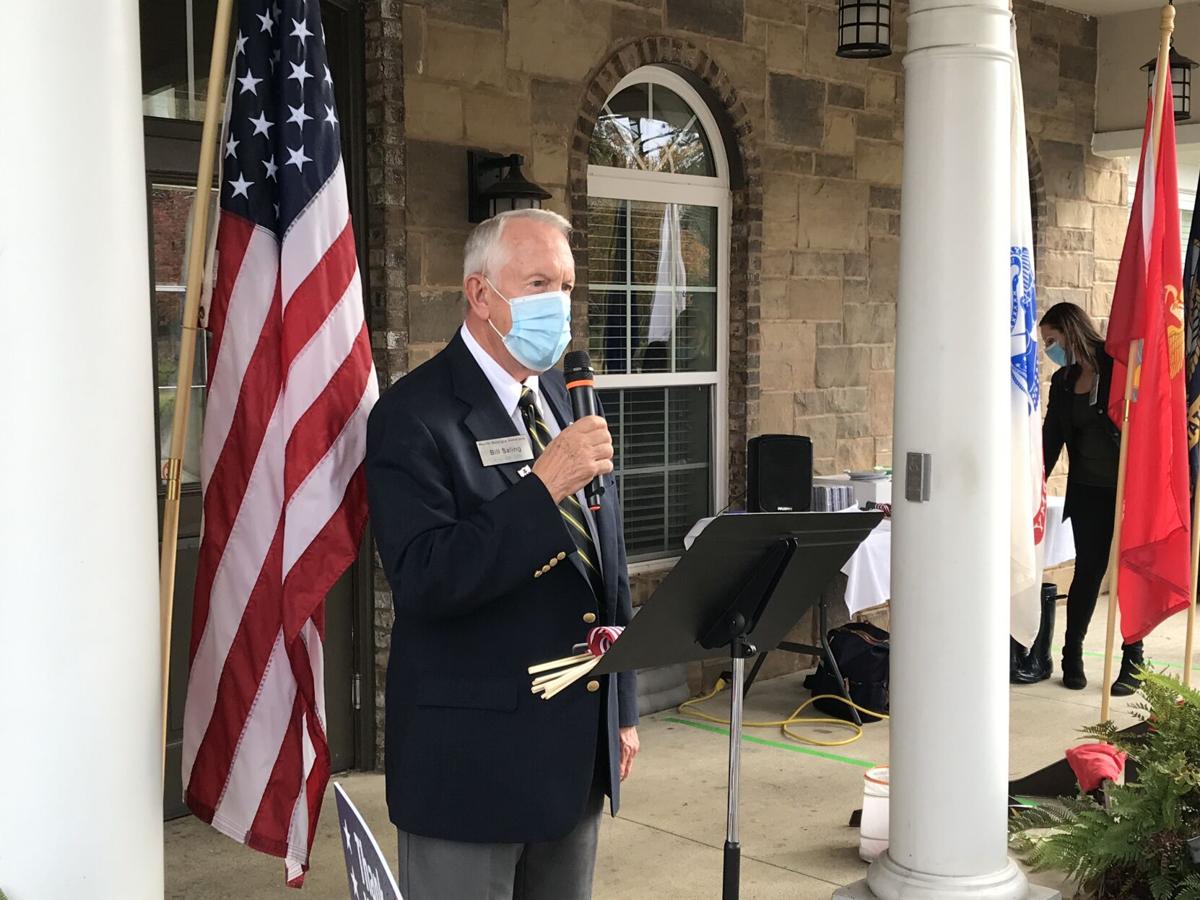 Veteran Bill Saling, who served in the U.S. Army during Vietnam, speaks at Wednesday's Veterans Day ceremony at Benton House in Woodstock.

Parmer meets with the veterans residing at Benton House, personally thanking them for their service following the ceremony.

Thanking him for his service, Saling pins veteran Walter Lemke with an American flag lapel pin.

Veteran Bill Saling, who served in the U.S. Army during Vietnam, speaks at Wednesday's Veterans Day ceremony at Benton House in Woodstock.

Despite the intermittent rain showers passing through the county Wednesday, veterans at Benton House in Woodstock took part in a Veterans Day ceremony with guest speaker Bill Saling.

Saling, an Army veteran who served in Vietnam, began his speech reminding everyone how Veterans Day began, initially celebrated as Armistice Day to mark the end of the World War I before becoming Veterans Day under President Dwight Eisenhower in 1954. The holiday has also marked the interment of unknown soldiers in their respective tombs at Arlington National Cemetery, Westminster Abbey in London and the Arc de Triomphe in Paris. Saling also stressed that, no matter where or when someone served, they are all deserving of the title of “veteran.”

“Anyone who served and is honorably discharged is a veteran,” Saling said. “A clerk who served in peacetime is just as much of a veteran as one who served overseas in frontline combat.”

He wrapped up his speech by pointing out how, with those serving in the armed forces coming from all walks of life, veterans are a strong cross-section of the country as a whole. In addition to reciting the Soldier’s Creed and the Charles Province poem, “It is the Soldier,” Saling put forth a reminder that, even after the war is over, veterans are still fighting a number of battles, including those that are not as easy to see. For example, PTSD and similar conditions have led to the sobering statistic that veterans are more likely to commit suicide than non-veterans and that, on average, between 20 and 25 veterans end their lives every day.

Along with Saling’s remarks, Army 1st Sgt. Dennis Parmer offered a few thoughts as well, thanking the veterans in attendance for their service. Representatives from Crossroads Hospice and Palliative Care reminded the veterans they had served with an awareness that they could be wounded or killed in the line of duty, that they had served no matter which way the winds of politics were blowing and that the American citizenry have never expressed gratitude for their service enough. All of the veterans in attendance were presented with a certificate and American flag pin in recognition of their service in the armed forces, and the Armed Forces Medley was played, giving the veterans another chance to hear their respective service’s anthem.

A Ball Ground manufacturer of antennas has announced formation of a new defense division, which will also expand its workforce.