Robert Aaron Long, 22, is escorted into a Cherokee County courtroom in handcuffs for a plea and sentencing hearing. 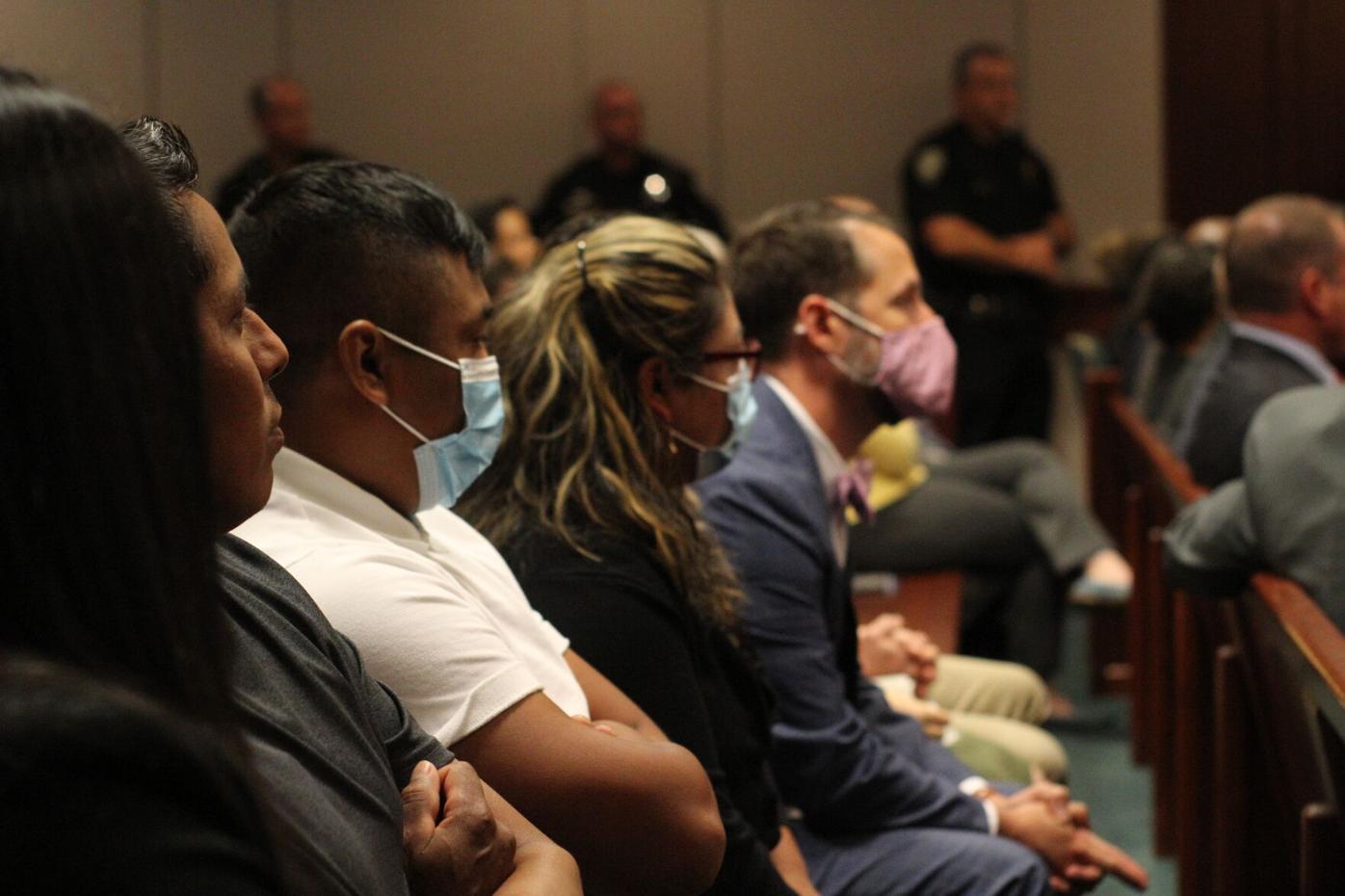 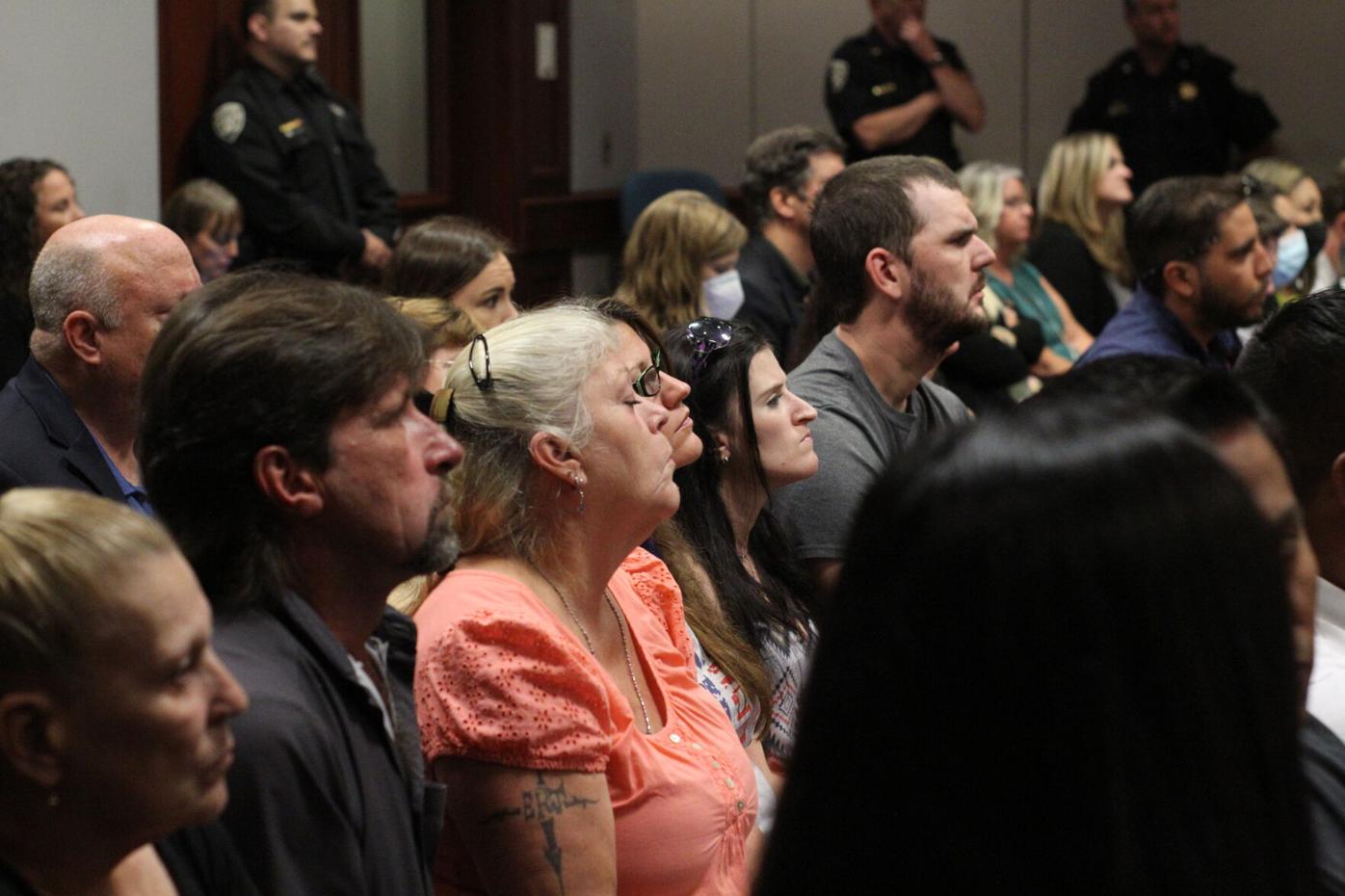 Families of the victims in the shooting at Young’s Asian Massage watch Tuesday’s hearing. 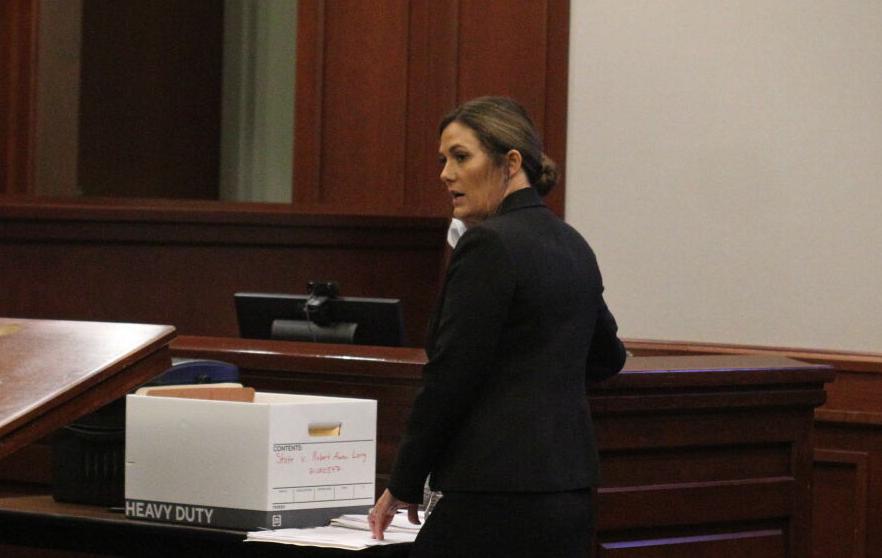 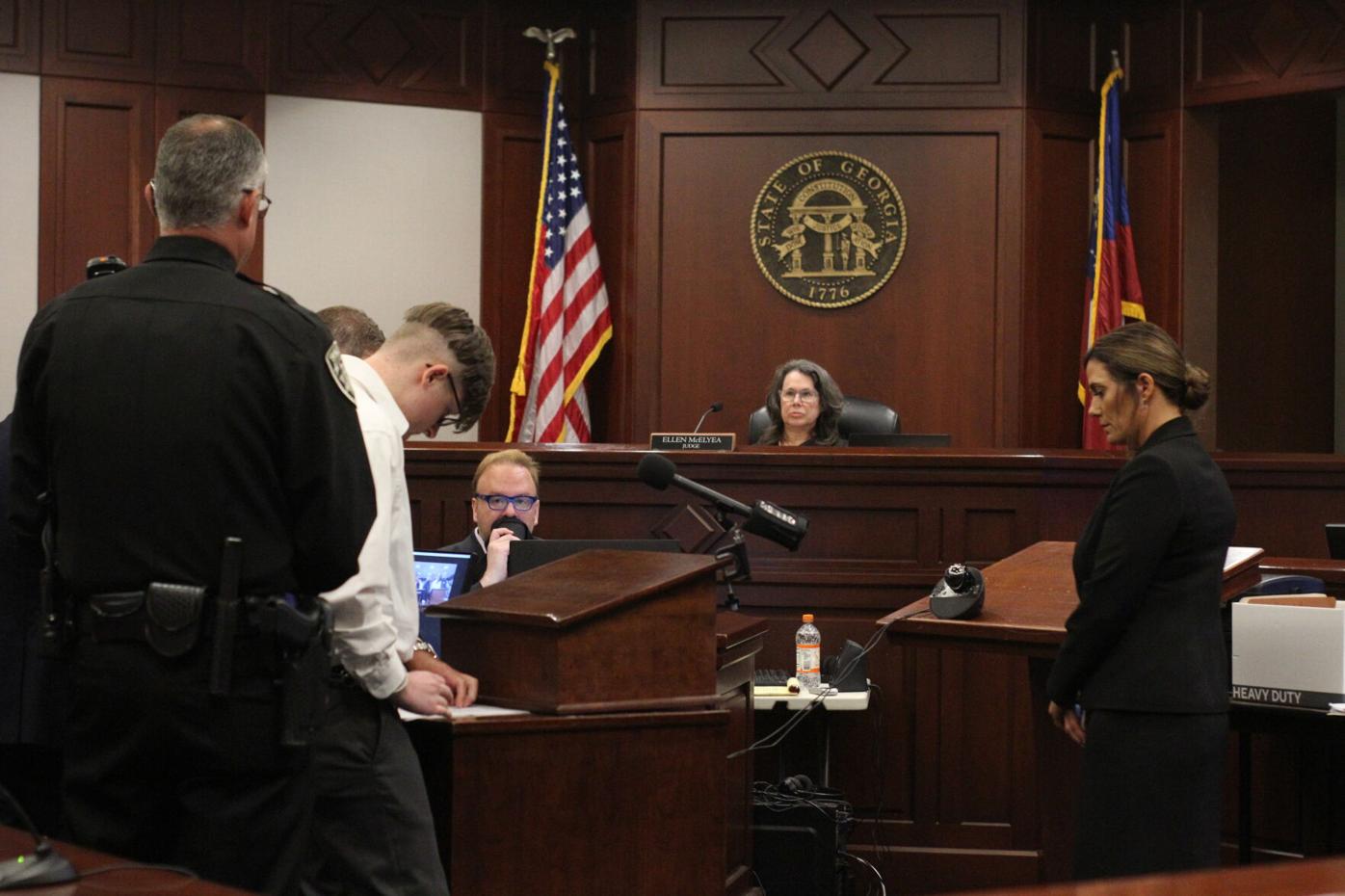 Robert Aaron Long signs a guilty plea to all charges in his indictment, while Judge Ellen McElyea and District Attorney Shannon Wallace look on. 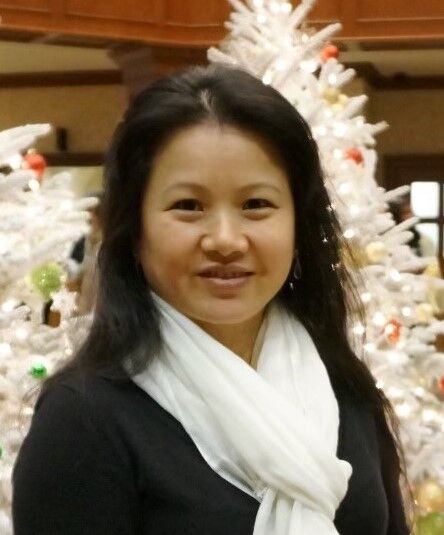 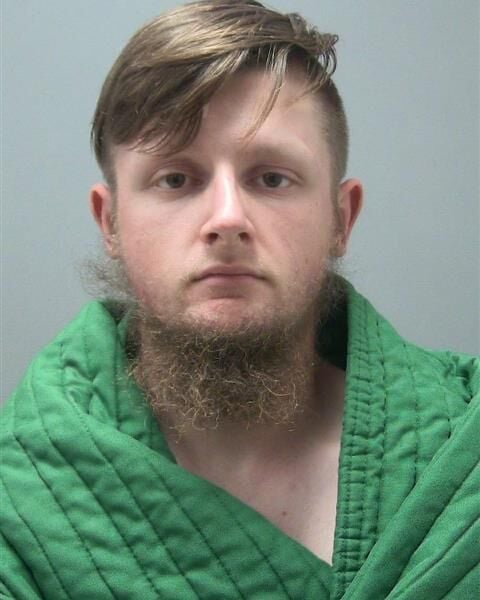 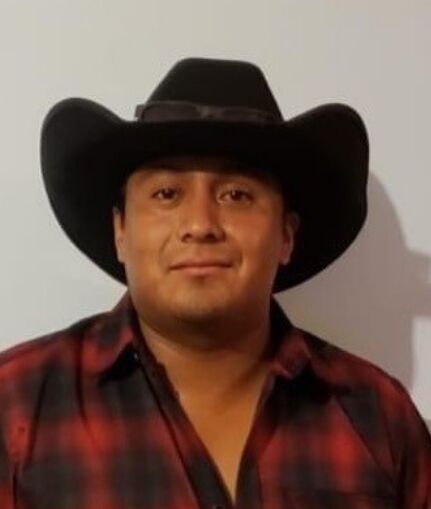 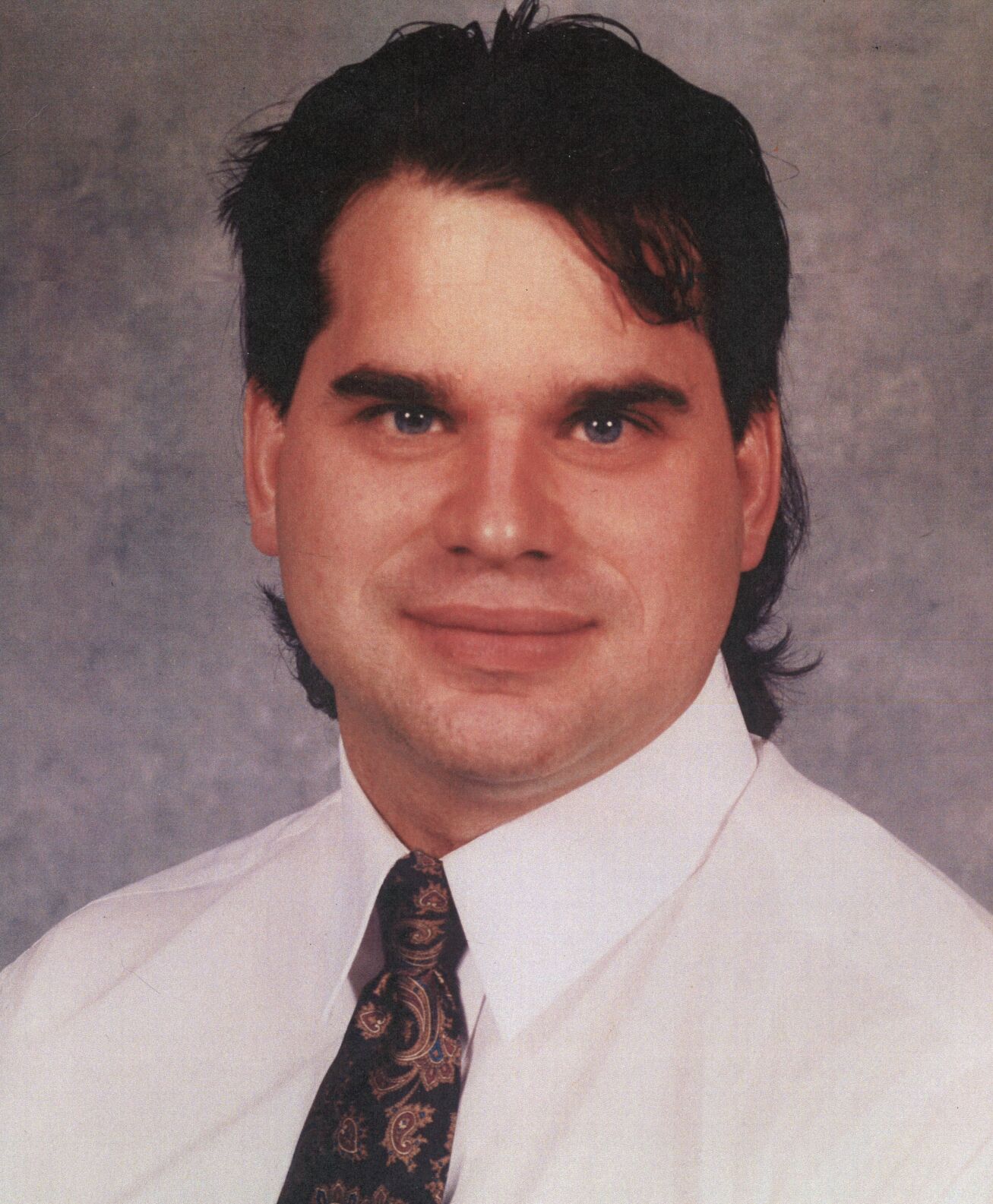 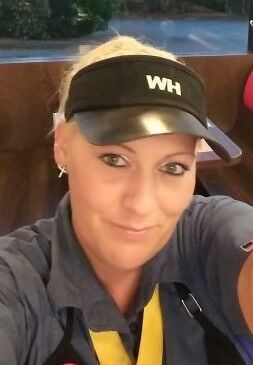 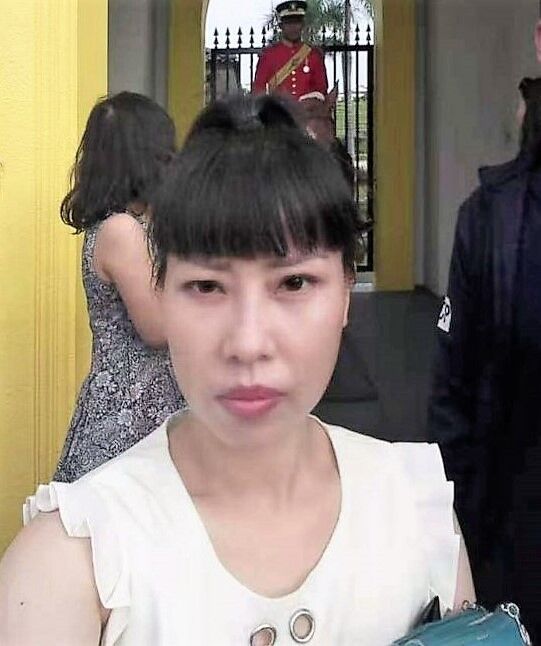 Robert Aaron Long, 22, is escorted into a Cherokee County courtroom in handcuffs for a plea and sentencing hearing.

Families of the victims in the shooting at Young’s Asian Massage watch Tuesday’s hearing.

Robert Aaron Long signs a guilty plea to all charges in his indictment, while Judge Ellen McElyea and District Attorney Shannon Wallace look on.

The man charged with killing eight people at spas in the metro Atlanta area has been sentenced to multiple life sentences without parole for crimes in Cherokee County.

Authorities say Long has blamed the shootings on a “sex addiction” and saw the outlets as an outlet for that addiction. When he was arrested in Crisp County, police and prosecutors say he was headed to Florida to commit similar mass shootings.

The Cherokee sentencing is the result of a plea deal

McElyea accepted a negotiated plea between District Attorney Shannon Wallace and Long’s attorneys. The deal takes the death penalty off the table after prosecutors initially sought the death penalty, Wallace said. Cherokee prosecutors also initially sought hate crimes charges based on gender prejudice, though they did not believe they would be able to prove the shootings were racially motivated in a trial, she said.

Long was sentenced for all charges he was indicted on in May: four counts of malice murder, four counts of felony murder, criminal attempt to commit murder, 11 counts of aggravated assault, aggravated battery, possession of a firearm during the commission of a felony, and criminal damage to property in the first degree.

In Fulton County, he is formally charged with: four counts each of murder and felony murder and five counts of aggravated assault, domestic terrorism and multiple counts of possession of a firearm during the commission of a felony.

The judge said she hoped the sentencing would help bring closure to the victims’ families.

“The families will still be struggling and grieving. I don’t expect it’s a wound that will ever fully heal, but I hope time will at least help you learn to live with the wound,” McElyea said.

At Tuesday’s plea and sentencing hearing, Wallace and Long revealed more details about the events leading up to the shooting and the prosecution’s case in Cherokee.

The morning of March 16, Long was confronted about his pornography use by a roommate who was described as an “accountability partner,” he later told authorities. He had recently been kicked out of his parents’ home for seeking and receiving sexual services at a massage business in Fulton County. He contemplated killing himself, and bought a handgun and 50 bullets from a Holly Springs store, and from there bought bourbon at a package store and got drunk, he told investigators.

Long traveled to Young’s Asian Massage, a business he had visited before, he sat in his car in the parking lot for about an hour before going inside, surveillance footage showed. There, he changed his mind: he would instead target the workers at the business. Long later told authorities that he was “seeking vigilante justice in the sex industry,” Wallace said. At Young’s, Long shot and killed the four victims, and shot a fifth person, a man, in the face, who was in critical condition but survived.

The wife of one of the victims, and the man who survived being shot at Young’s, told the court they are still feeling the aftermath of the mass shootings.

“He loved life and he had so many years left to enjoy it. I can’t hear his voice anymore. I can’t hear him tell me how his day was. I can’t see him smile. I can’t cook for him anymore. I can’t give him hugs and kisses. It’s so hard to accept. A part of me died with him that day. I am shattered,” she told the court. “None of the victims deserved what the defendant did to them.”

Elcias Hernandez-Ortiz, was shot in the nose and the bullet went into his esophagus, and remained lodged in his body, Wallace said. Ortiz told the court in Spanish, through a translator, that he used love to sing but could no longer do so.

“(Long) didn’t think in the moment about the families...leaving children without their mothers, families with empty hearts. It was very hard for my family,” he said. “I only want that justice will be served, please.”

Daran Burns, one of Long’s attorneys, said his client was “ready to accept responsibility” for the Cherokee County mass shooting.

Answering questions from the judge, Long corroborated Wallace’s statement and said his initial plan was to enter the spa business before shooting himself. His train of thought was “not remotely logical” when he decided to target the spa employees. He said he did not recognize any of the people at the business.

“It was, in essence, a blame-shifting from myself onto them for my actions,” he said.

“Our community has been permanently damaged”

With the Cherokee County case resolved, Long will be transferred to Fulton County authorities to face the charges against him there. He is scheduled to appear in court in Fulton for a plea and arraignment 9 a.m. Aug. 23, according to a judge’s order filed last week.

After the sentencing, Wallace told members of the press that family members of the victims in the Cherokee shooting agreed they preferred to see a swift resolution with a life sentence to a possible years-long death penalty case.

“The victims of this unspeakable crime were diverse. There were women and men, and represented numerous ethnicities. There were spouses, parents, siblings and beloved friends,” she said. “They lived here, they worked here, they shopped here and went to church here, until that cold and rainy day in March when the defendant deliberately took it all away, leaving immeasurable pain and suffering to those left behind.”

Wallace said lives were “forever changed,” adding, “our community has been permanently damaged by the horrific assault on our sense of security.”

“The horrendous act has affected so many in our community and beyond, and we’re hopeful that the sentence imposed today will bring some peace and healing to all of those impacted by this tragedy,” she said.

The four women killed in Atlanta during Tuesday’s mass shooting have been identified by the Fulton County Medical Examiner’s Office. They are:

A hearing for alleged Atlanta spa shooter Robert Aaron Long was postponed to Sept. 28, but prosecutors reveled they intend to pursue hate crime charges and confirmed they are seeking the death penalty.