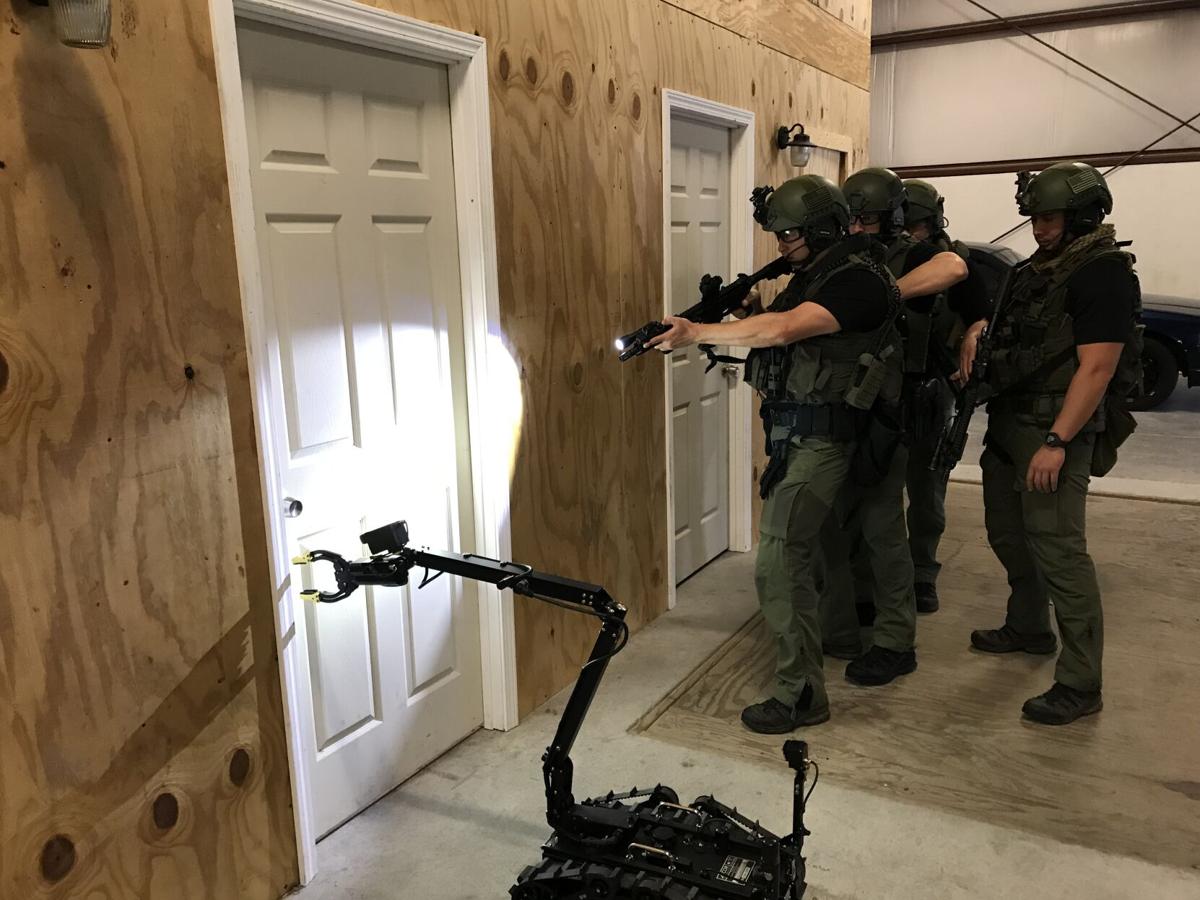 Officers with the Cherokee Sheriff’s Office SWAT team stand ready to access a building while the agency’s new Mini-Caliber model of robot moves to open the door in a demonstration of the robot unit Monday morning at the CSO training facility. 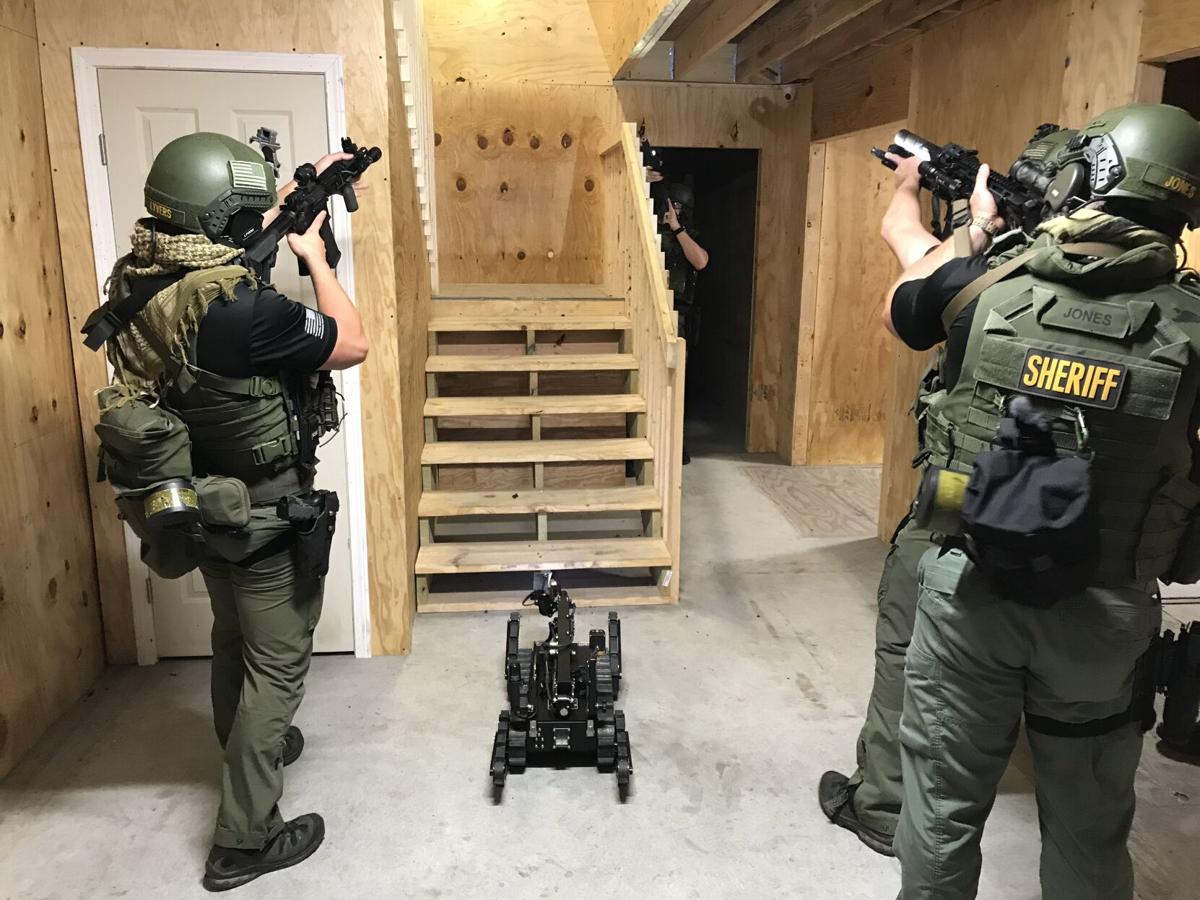 SWAT team members cover the stairway while the robot unit prepares to climb the stairs to the upper level of the training building. 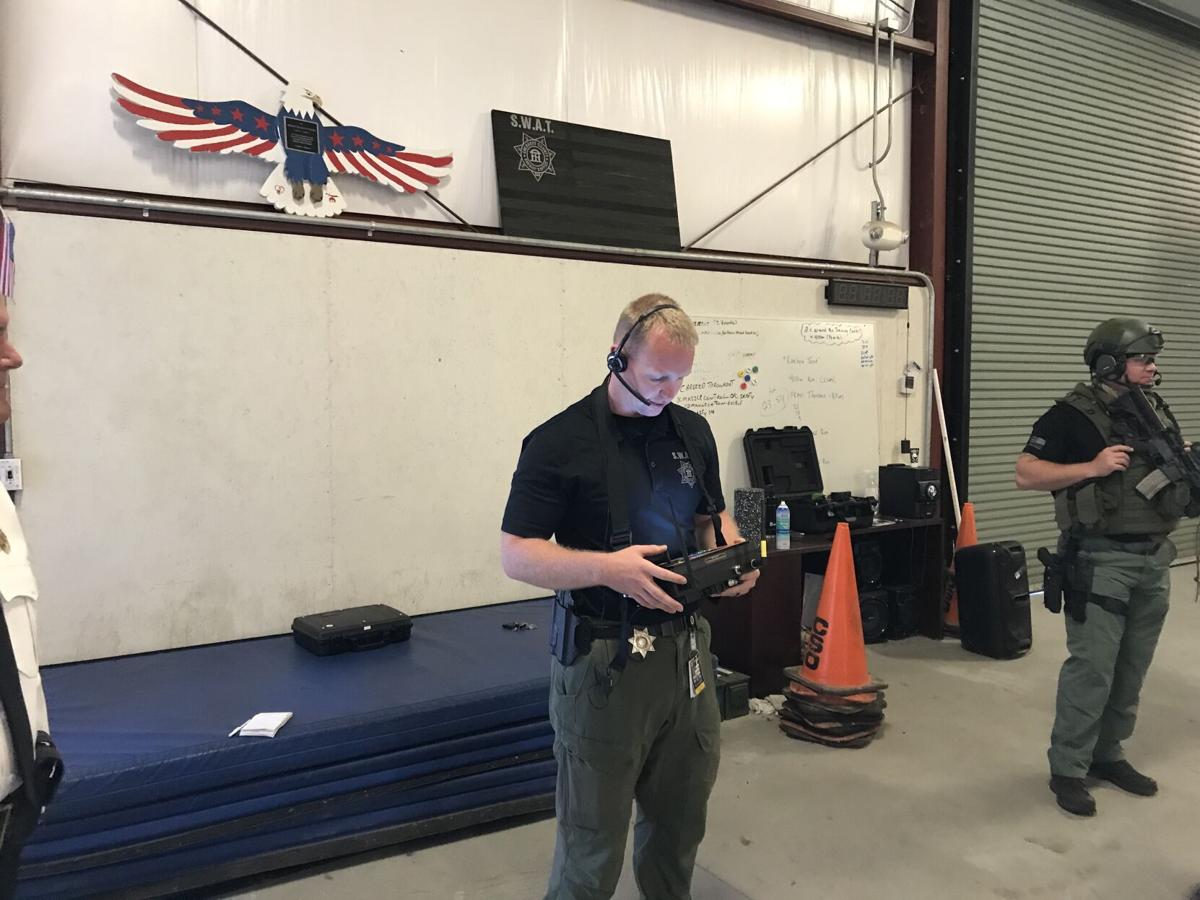 Officers with the Cherokee Sheriff’s Office SWAT team stand ready to access a building while the agency’s new Mini-Caliber model of robot moves to open the door in a demonstration of the robot unit Monday morning at the CSO training facility.

SWAT team members cover the stairway while the robot unit prepares to climb the stairs to the upper level of the training building.

Over the past couple of weeks, members of the Cherokee Sheriff’s Office SWAT team have been training with a new piece of equipment, as a new robot unit was recently delivered to the agency.

During a demonstration of the Mini-Caliber model of robot Monday morning, SWAT team members showed how they would follow the unit into a building where a suspect might be holed up and, working in tandem with the robot, could effectively search the structure, room by room, in a safer manner than without the unit. Operating the robot was Investigator Courey Carter, who explained the controls, cycled through some of the viewpoints provided through the five cameras on the unit, gave it commands to open a door, go up and down stairs and even showed off its voice capabilities, allowing the officer controlling the robot to speak to suspects in situations where the robot would be needed.

“There’s virtually no obstacle this can’t go over,” Carter said.

Unlike the earlier MK3 ICOR robot the Mini-Caliber replaced, the Mini-Caliber weighs in at approximately 64 pounds, compared to the MK3’s approximate weight of 200 pounds. The Mini-Caliber can be carried into any situation by one or two officers and does not need a specialized trailer to transport it from agency headquarters. In addition, while the MK3 required operators to spend hours training on it to master the controls, Carter said the new robot is easy to learn, meaning virtually any officer with the sheriff’s office could take control of it when needed.

“All those years playing Xbox really came in handy,” Carter said with a laugh.

According to Lt. Olen Boughner, who serves in the Criminal Investigations Division of the sheriff’s office and is also on the agency’s SWAT team, the need for a new robot has become very clear in recent months.

“There have been at least three incidents in 2020, and numerous incidents before that in which a robot of this type would have been very useful, and would have been instrumental in mitigating the risk to officers when gathering intelligence on barricaded suspects,” Boughner said.

Monday’s demonstration showcased how the robot’s claw arm could be used to open and close doors, and there are a variety of other attachments to give it additional capabilities. Boughner also went into a bit more detail about the robot’s five cameras, explaining that it was equipped with two infrared cameras, a 10X optical zoom camera, a claw arm camera and a mast camera for wide-angle views.

During a recent Cherokee County Board of Commissioners meeting, the board approved the purchase of the robot, with County Manager Jerry Cooper explaining the robot was obtained for $59,550 from ICOR Technology.

“They’ll use their existing budget, move funds from the gasoline line item to the equipment line item,” Cooper said.

“We will be able to put this robot in certain dangerous situations that traditionally a deputy would have to handle personally. This type of technology increases safety for law enforcement and suspects,” Sheriff Frank Reynolds said.

“Having such a device allows us to gather information and intelligence, as well as the capability to perform physical mission tasks that would otherwise put a SWAT operator in danger,” Boughner added.

Capt. Mark Anderson said, “Although they are expensive, they can do jobs that could take hours with human officers and that don’t endanger our officers.”

The Canton/Cherokee County Independent Filmmakers is a group consisting of local residents who say they have a passion for filmmaking, as well…