The Latest: Most in New Orleans with virus had … 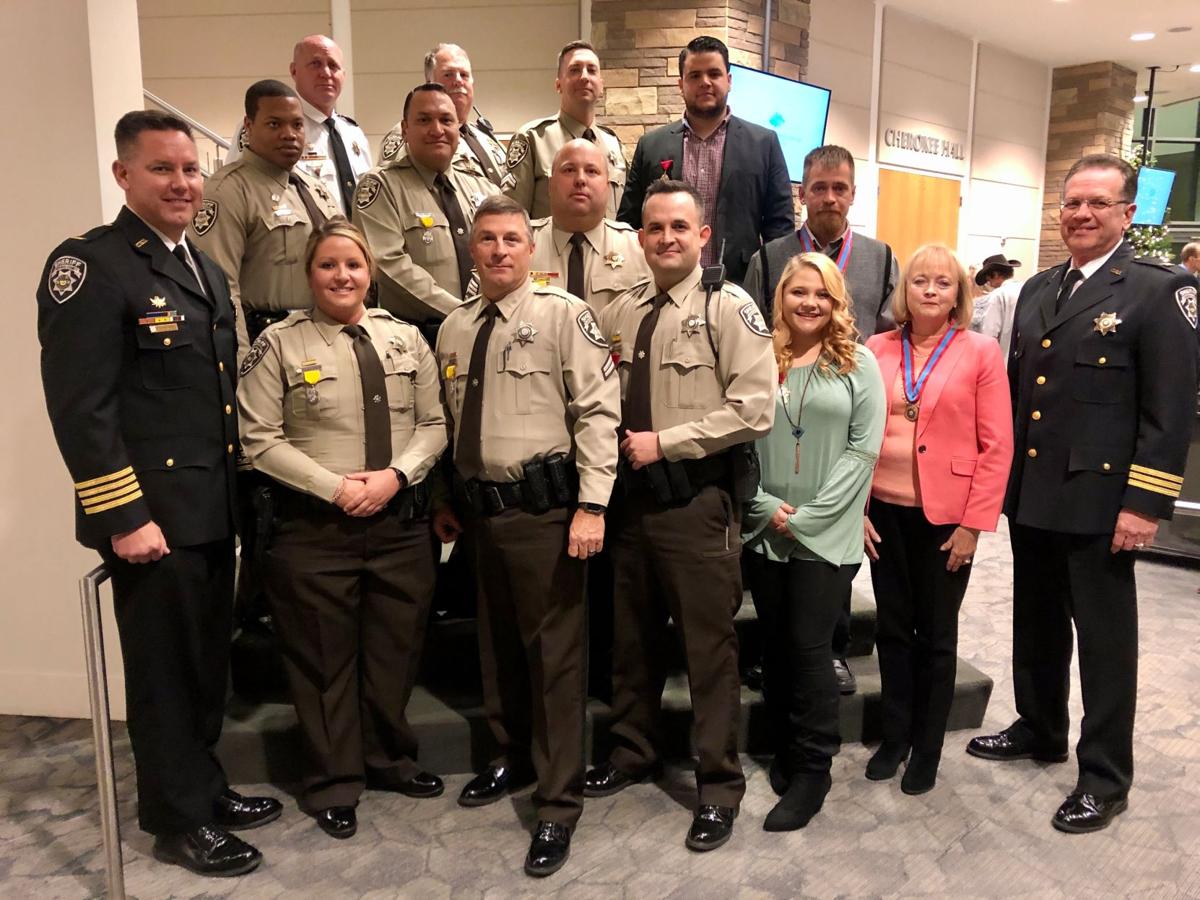 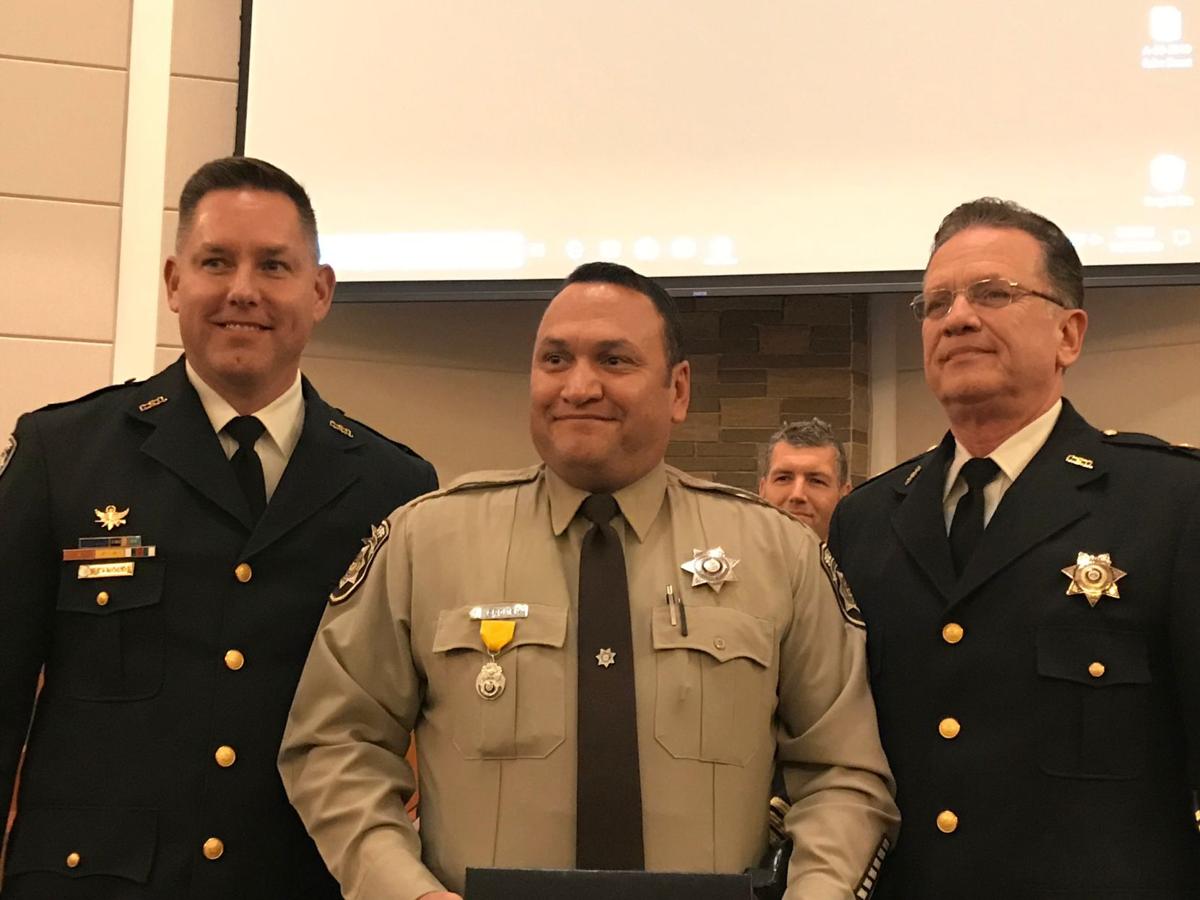 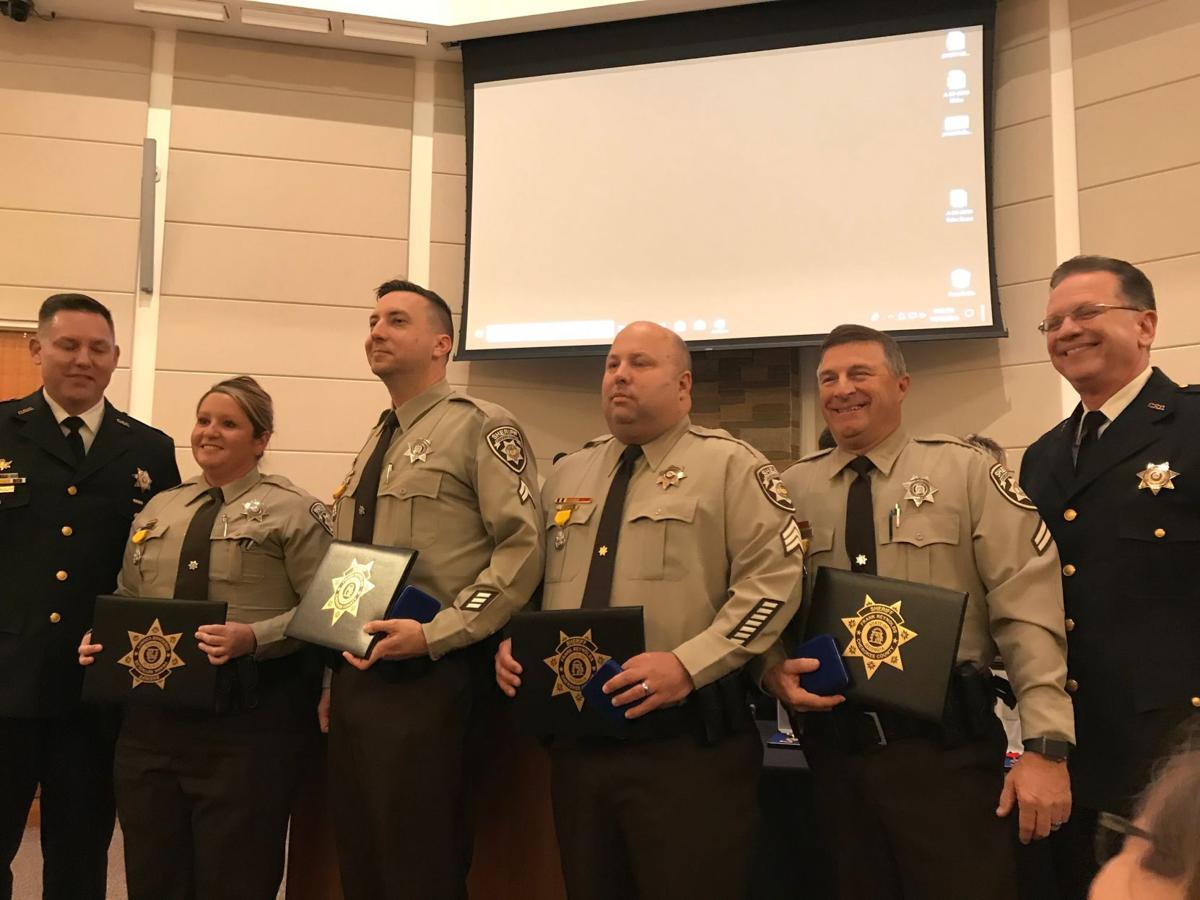 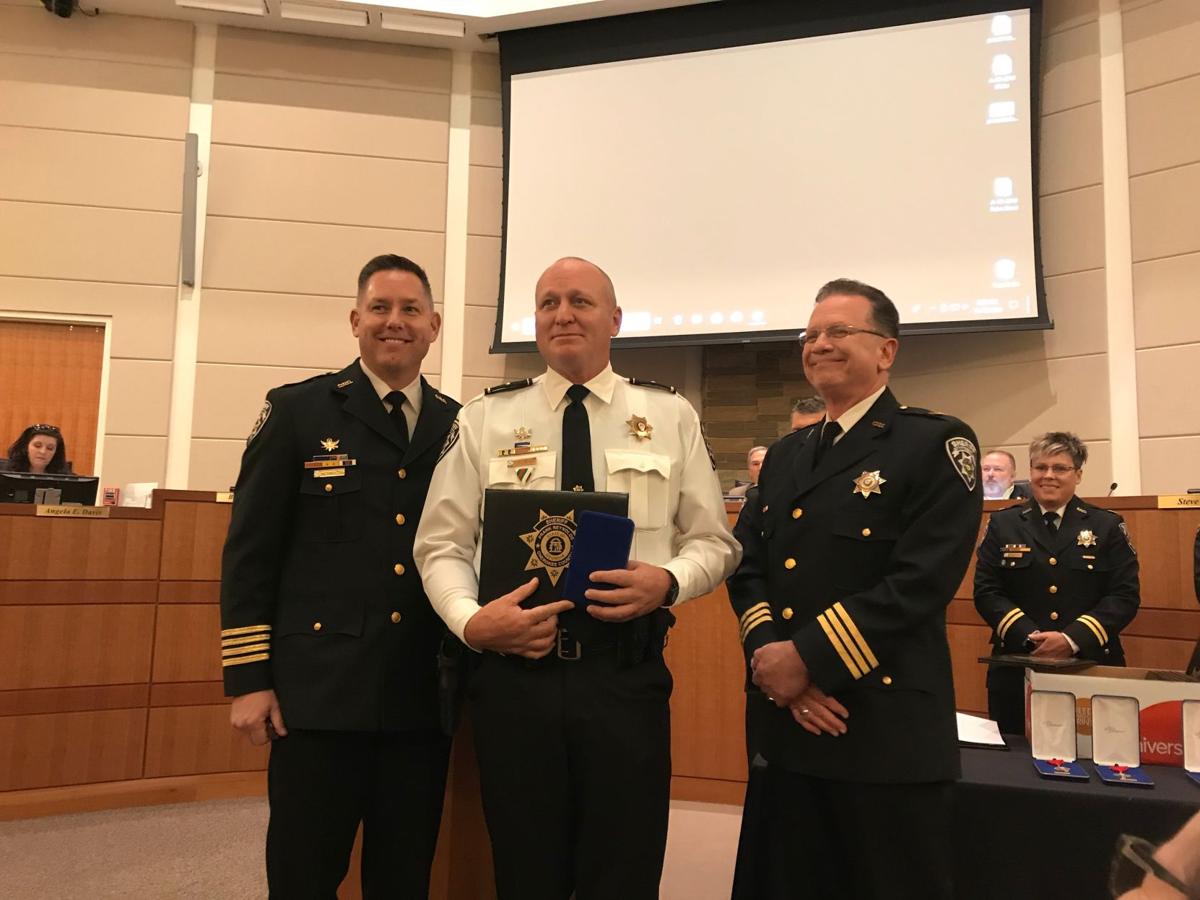 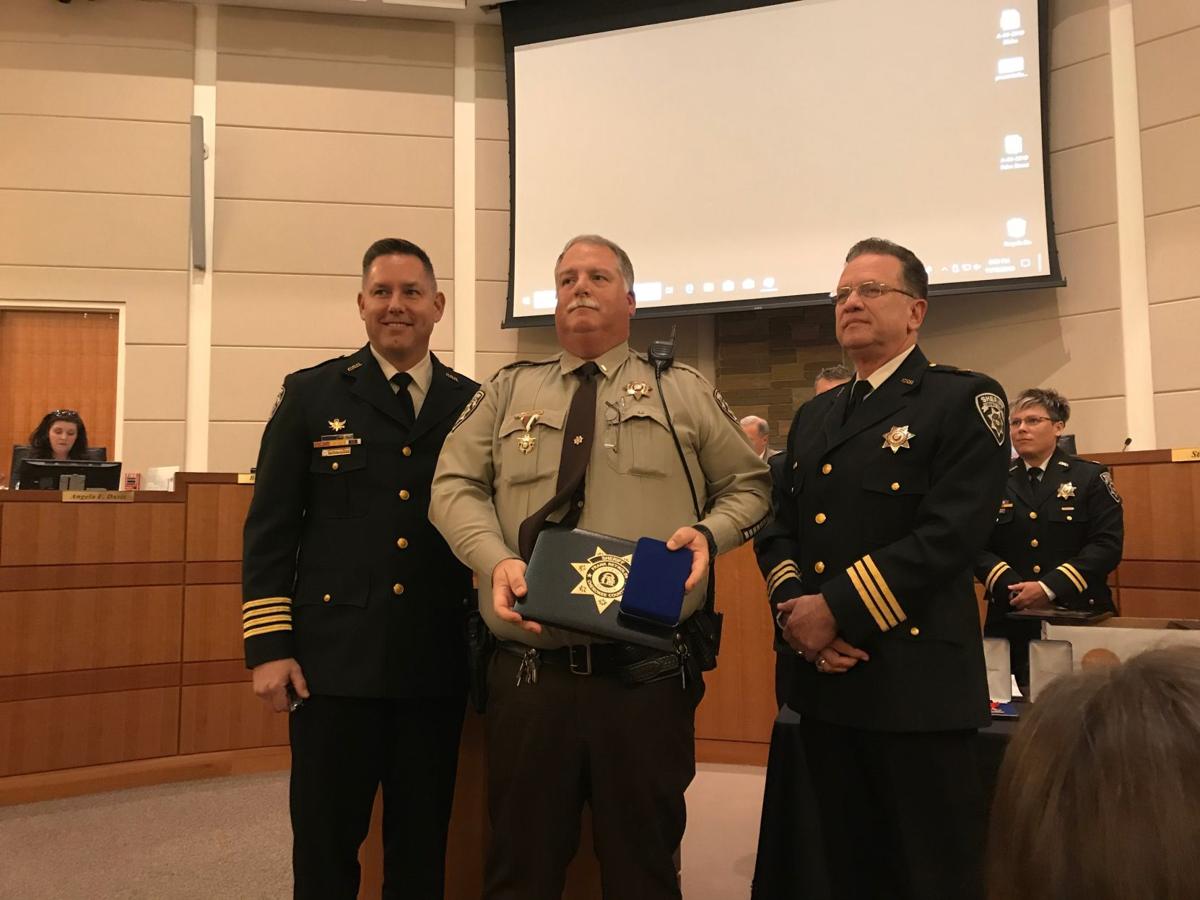 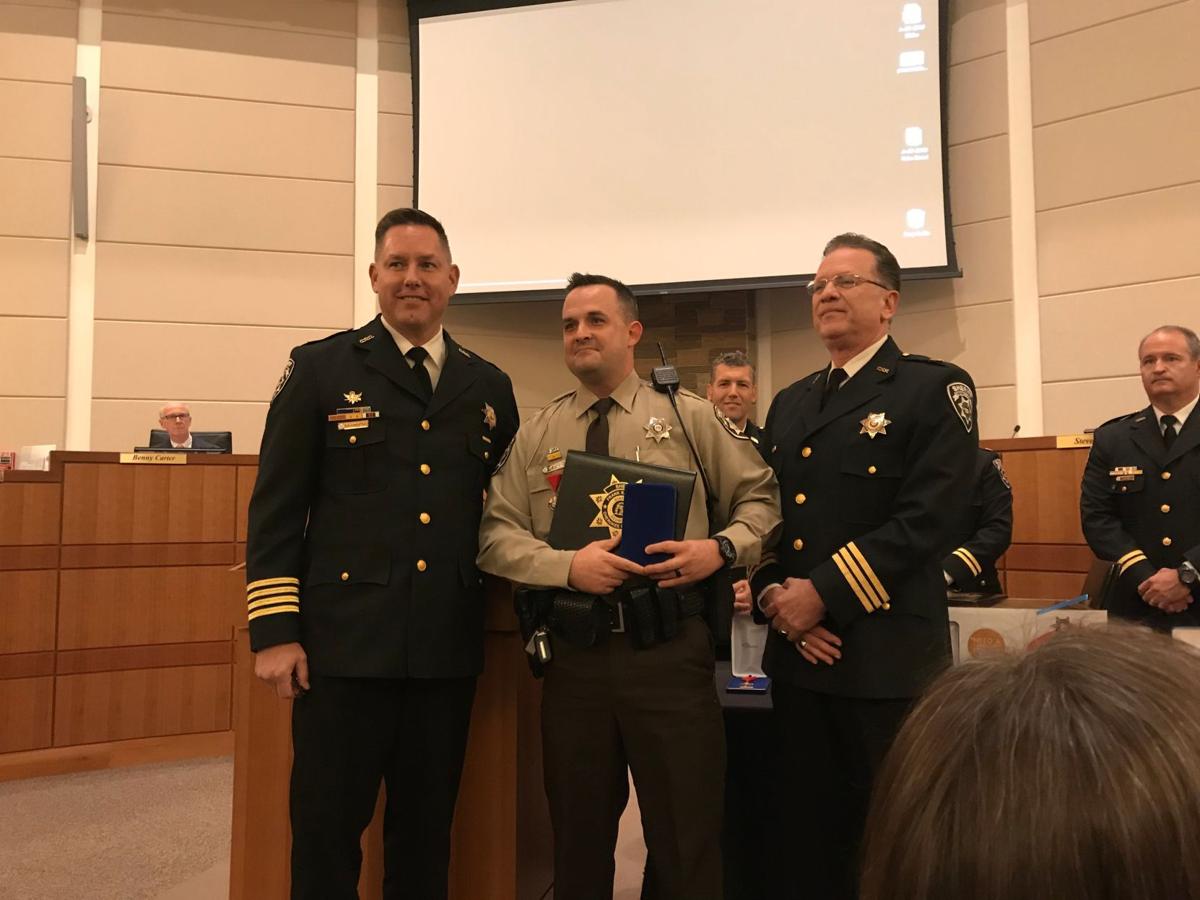 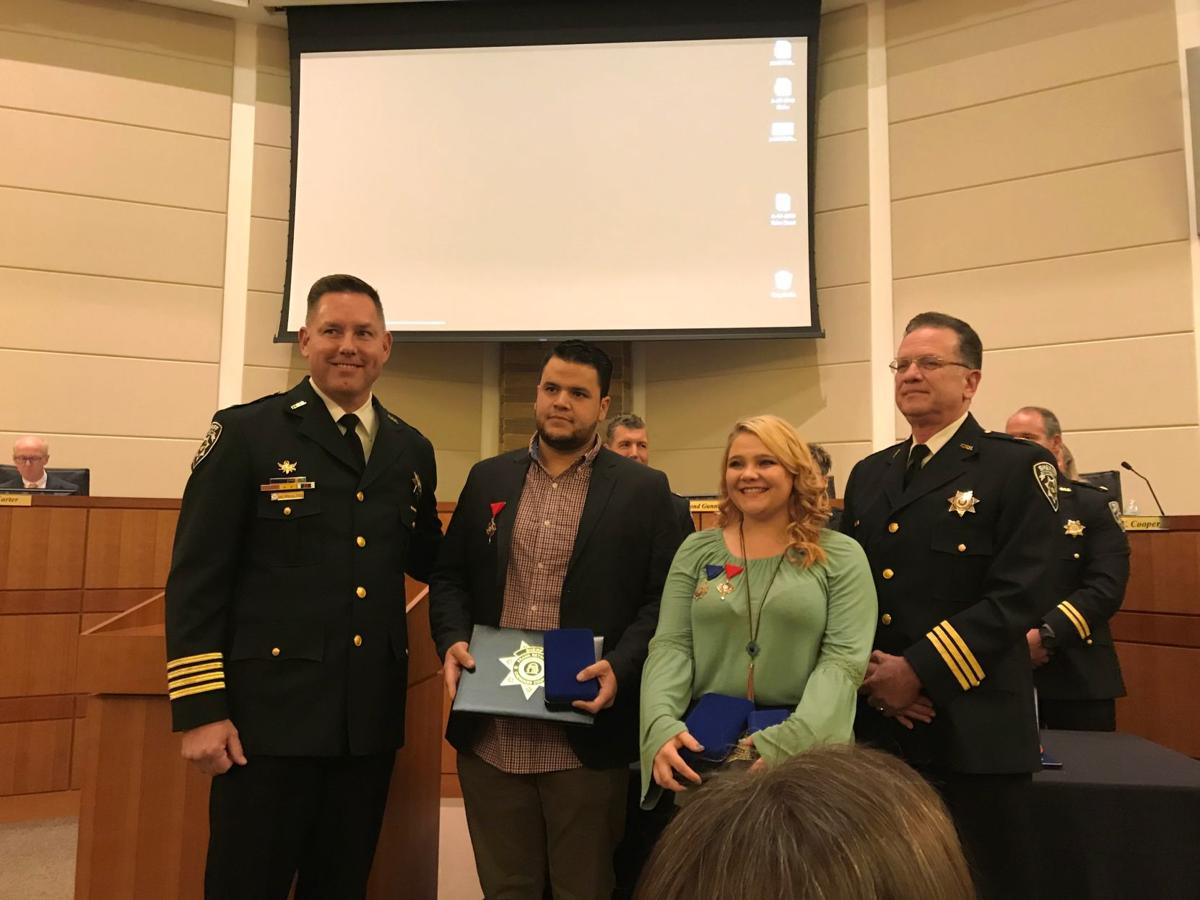 Edgar Correa, center left, and Keilee Herrick, center right, were both awarded the Sheriff's Lifesaving Award, while Herrick was also presented with a Sheriff's Bravery Award. 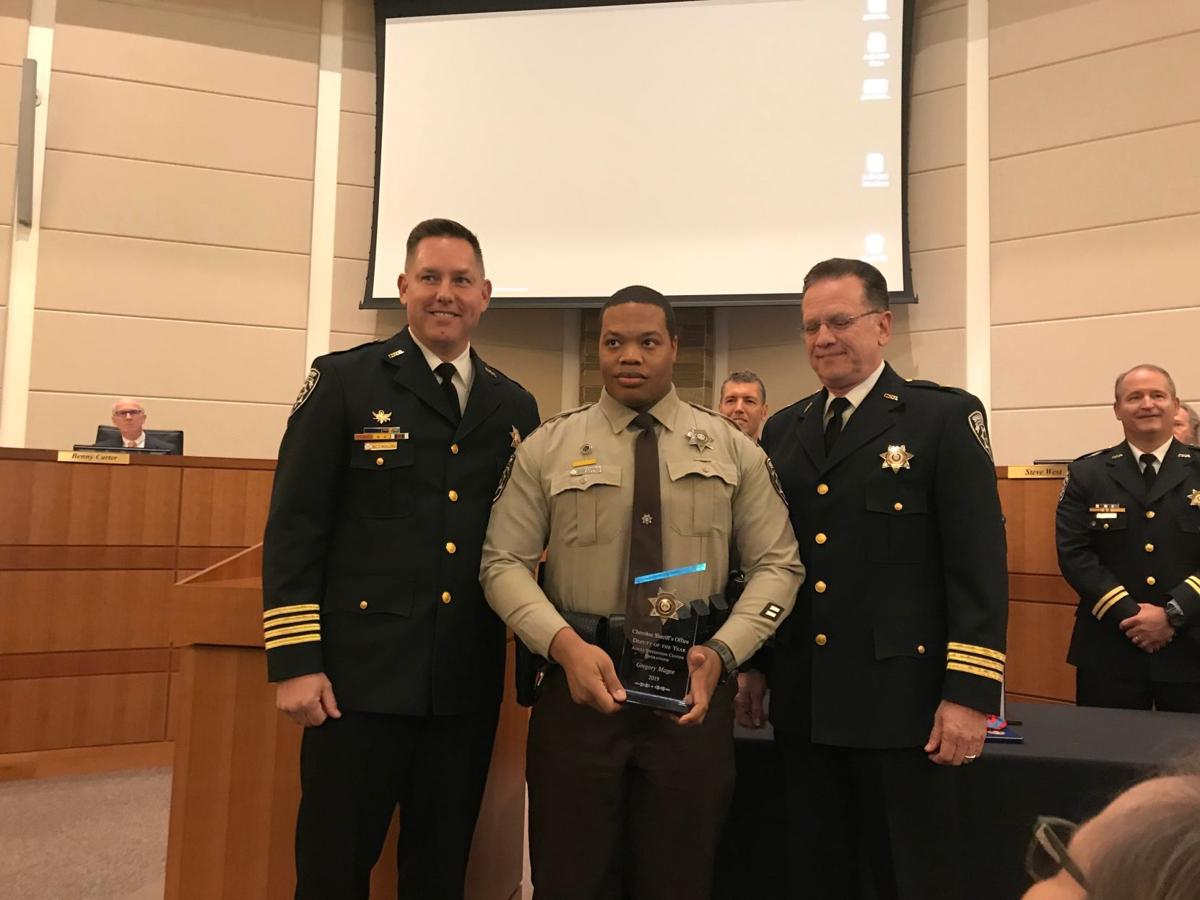 Deputy Gregory Magee, center, was named the Deputy of the Year for Jail Operations during Tuesday night's ceremony. 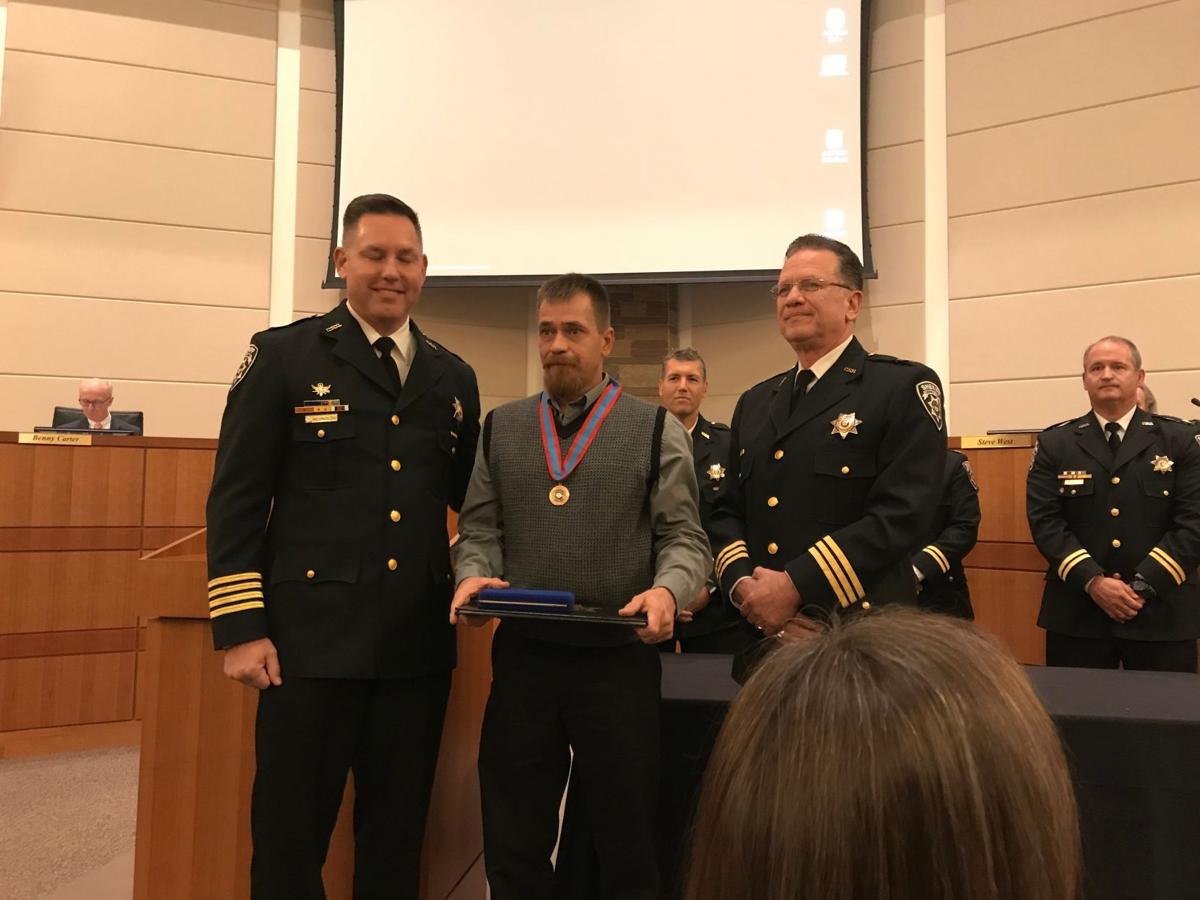 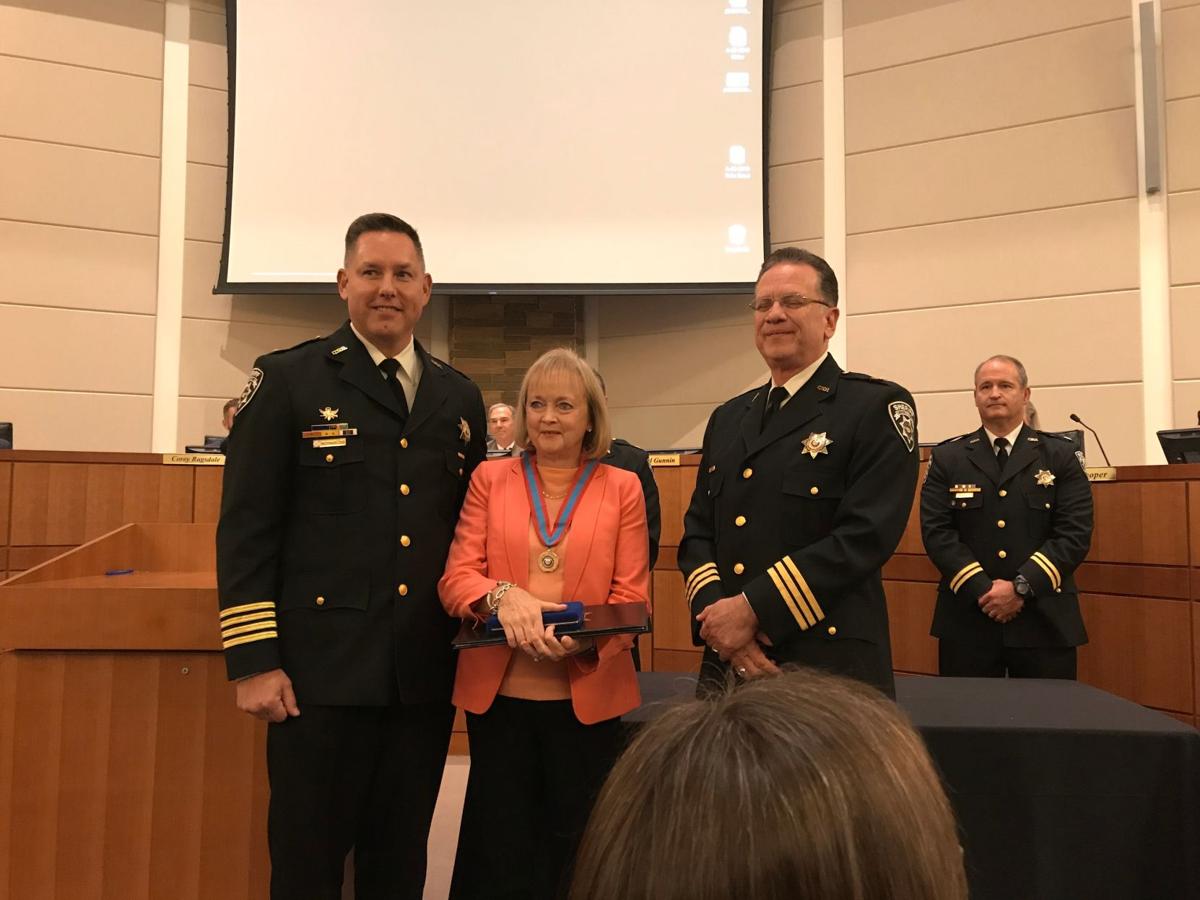 Rebecca Johnston, center, was named an Outstanding Cherokee County Citizen Tuesday night for her dedication to many different service projects benefiting the people of Cherokee County, as well as her years of service to a multitude of local agencies and organizations.

Edgar Correa, center left, and Keilee Herrick, center right, were both awarded the Sheriff's Lifesaving Award, while Herrick was also presented with a Sheriff's Bravery Award.

Deputy Gregory Magee, center, was named the Deputy of the Year for Jail Operations during Tuesday night's ceremony.

Rebecca Johnston, center, was named an Outstanding Cherokee County Citizen Tuesday night for her dedication to many different service projects benefiting the people of Cherokee County, as well as her years of service to a multitude of local agencies and organizations.

Sheriff Frank Reynolds and the Cherokee Sheriff’s Office recognized officers and civilians alike Tuesday night as the agency gave its quarterly awards presentation at the Cherokee County Board of Commissioners meeting.

Deputy Bobbie Cromer was awarded a Sheriff’s Commendation for actions he took following an incident of appliance theft in the Clayton community in late June. After taking an incident report, Cromer gave the victim his personal cell number and asked him to call in case he had any additional information. The very next day, Cromer received a call from the victim, who had found a listing on social media of his items for sale. Cromer followed up with the seller and, after finding out the items were being stored in Forsyth County, contacted detectives in both Cherokee and Forsyth counties to help set up a sting that resulted in nearly $5,000 worth of appliances being recovered.

Sgt. Jeremy Akins, Detective Mike Duncan, Detective Bryant Olejnik, Investigator Kasey Sobotka and Investigator Tanshawn Clark were all awarded Sheriff’s Commendations after the five worked together in support of someone in need. As a Criminal Investigations Special Victim’s Unit Investigator, Duncan met a 15-year-old female victim who was homeless, with her only possessions being the clothes she was wearing. Duncan shared the victim’s story with the other members of his unit, and they purchased clothing and essential toiletries for the teenager, spending approximately $500 of their own money.

A Sheriff’s Commendation was awarded to Jason Allred with Atlanta Arbor. When a logging truck overturned on Lower Bethany Road and spilled part of its load onto Interstate 575, Allred happened to be in the vicinity with one of Atlanta Arbor’s dumpster trucks with a logging crane attached to it. Once the scene was safe, Allred used the crane on his vehicle to begin clearing logs from the road and median, allowing the highway to be reopened in less than two hours.

Lt. Casey McLeod was given a Sheriff’s Citation for Meritorious Service in recognition of his efforts in helping train deputies. Throughout the past year, McLeod spent 400 hours assisting the agency’s Training Division, specifically on in-service, Taser and firearms training. McLeod spearheaded the 2019 Uniform Patrol Division Specialized In-service, while also researching and developing leadership training for supervisors throughout the agency.

A Sheriff’s Citation for Meritorious Service was also presented to Free Home Precinct Commander Lt. David Simmons. Simmons plays a key role in helping hire new deputies by sitting in on virtually every session of the agency’s hiring board, as well as teaching classes in the Uniform Patrol Division Specialized In-service, coordinating various charity events and participating in community events in the Free Home area, such as reading to students at Free Home Elementary School.

Deputies Andrew Hendrix and Kurtz Garfield were awarded Sheriff’s Lifesaving Awards after both deputies assisted residents of the Clayton community in need of medical assistance. Hendrix performed CPR on a 70-year-old woman who was unconscious and not breathing on July 26, while Garfield did the same for a 73-year-old man who was unconscious, not breathing and had no pulse on July 21. Both survived the incident, thanks in part to the quick actions taken by the deputies.

After witnessing a single-vehicle rollover crash on Aug. 1, Edgar Correa and Keilee Herrick worked to extract the driver from her burning vehicle as responders raced to the scene. When the driver side door would not open, Correa broke a window and helped Herrick get into the vehicle. Once in position, Herrick began kicking the door until it was forced open and the two were able to get the driver out. For their actions, Correa and Herrick both received a Sheriff’s Lifesaving Award, while Herrick was also presented a Sheriff’s Bravery Award.

Deputy Gregory Magee was named Deputy of the Year for Jail Operations following the agency’s annual competition in early October. During the competition, deputies went through a formal interview, a uniform and weapons inspection, a firearms qualification course, a modified physical agility course and an exam on use of force, among other things. Since joining the Cherokee Sheriff’s Office in 2011, Magee spent time in the Uniform Patrol Division before transferring to the Court Security Division, where he has served as a compliance officer with the Accountability Courts. During the presentation of his award, it was also noted Magee served six years in the Georgia Army National Guard.

Lastly, Denver Peardon and Rebecca Johnston were named the latest recipients of the award of Outstanding Cherokee County Citizen. According to the proclamations read out with these awards, Peardon has dedicated himself to improving the quality of life in the Canton area, preserving the military history of the community through the writing of a book chronicling the experiences of 13 local World War II veterans and raising money for disabled veterans by taking historical military items to various locations as a mobile history museum. At the same time, Johnston was recognized for her two books on the history of Cherokee County, her commitment to various projects to improve lives throughout the county and her many years of service in organizations like the Cherokee County Historical Society, the Service League of Cherokee County, the Canton Downtown Development Authority and the Cherokee Board of Trustees for the Sequoyah Regional Library System.

Board of commissioners reviews changes to conservation communities plan

During Tuesday night’s meeting of the Cherokee County Board of Commissioners, Sheriff Frank Reynolds and the recognized a handful of officers …

The expansion of the Cherokee County jail is on schedule, according to county officials and representatives from the Cherokee Sheriff’s Office.