Done for the year: Braves ace Soroka felled by … 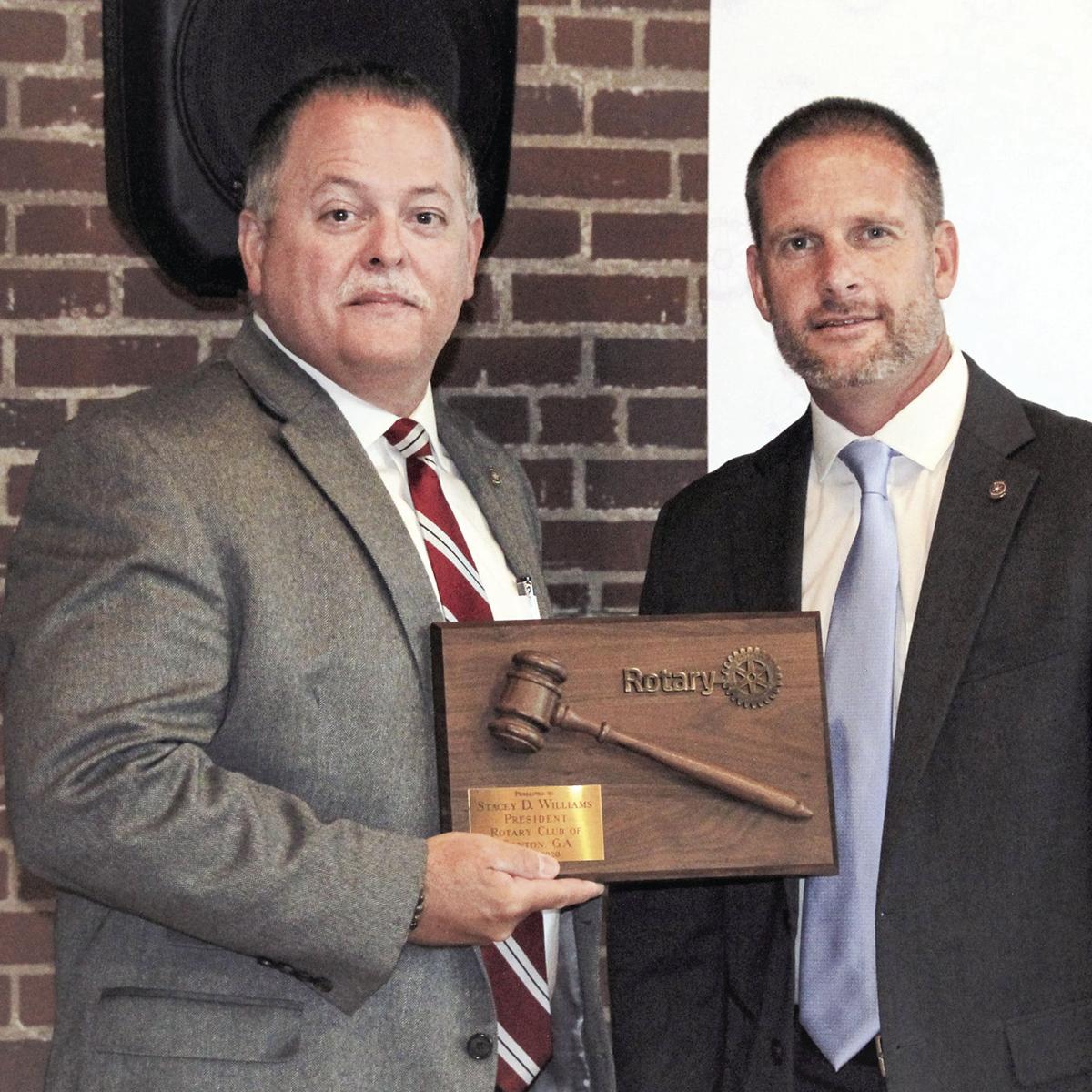 Rotary Club of Canton President Shane Moore, right, thanks Past President Stacey D. Williams during the Club’s recent “changing of the guard” celebration. 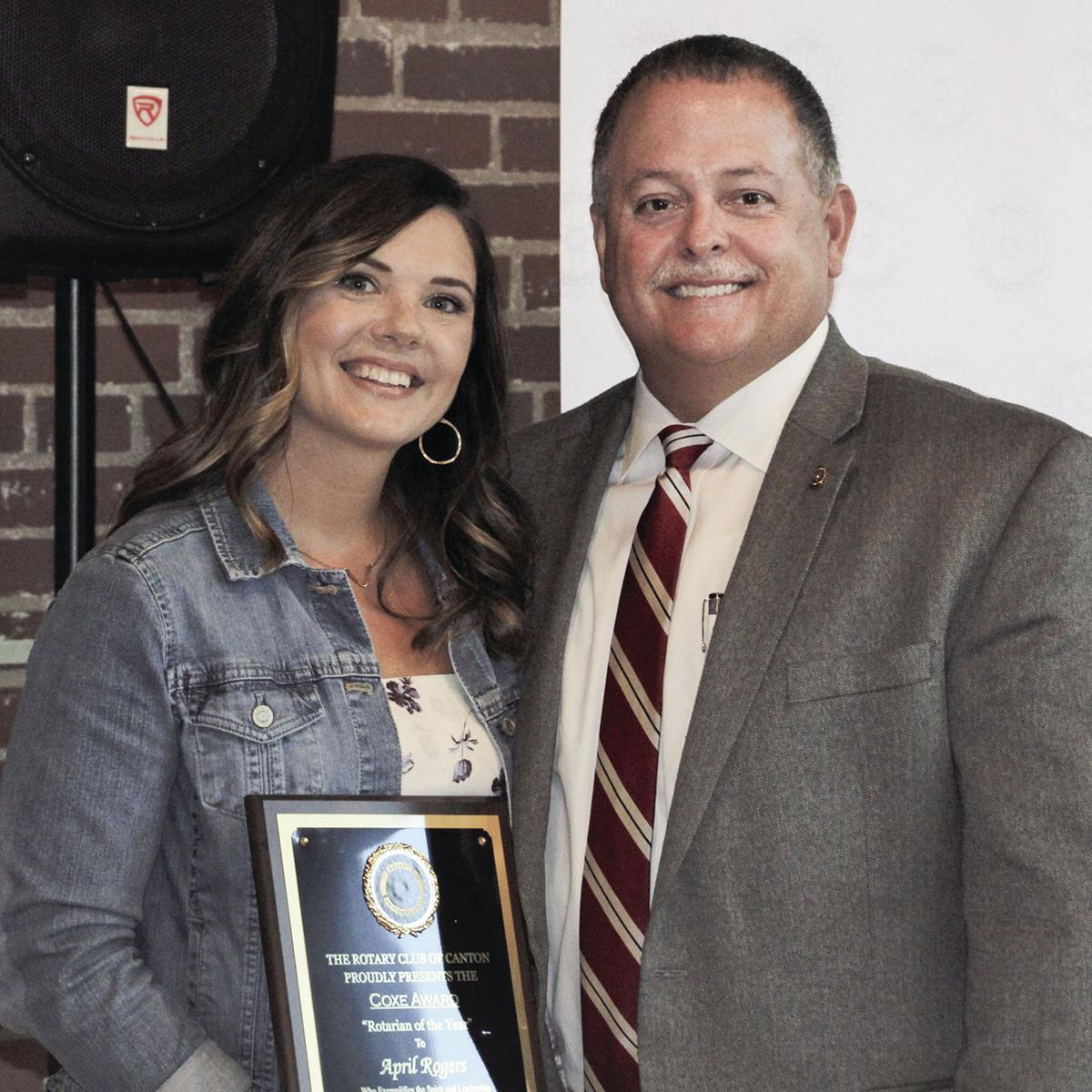 Rotary Club of Canton Past President Stacey D. Williams, right, presents the Coxe Award to the Rotarian of the Year to April Rogers, who served in numerous Club roles for the past year including Youth Services Chair and Family of Rotary Chair.

Rotary Club of Canton President Shane Moore, right, thanks Past President Stacey D. Williams during the Club’s recent “changing of the guard” celebration.

Rotary Club of Canton Past President Stacey D. Williams, right, presents the Coxe Award to the Rotarian of the Year to April Rogers, who served in numerous Club roles for the past year including Youth Services Chair and Family of Rotary Chair.

The Rotary Club of Canton is beginning its new year with a new president leading the community’s most historic civic club.

Shane Moore, who works as executive director of Cherokee Impact Soccer, recently accepted the gavel and the helm for a one-year term as club president.

In his first speech, presented at the Club’s annual “changing of the guard” dinner, Moore introduced his leadership team and spoke briefly about the new Rotary year, which officially began July 1.

“I’m looking forward to serving,” said Moore, who for the past year led the club’s community service efforts and, this spring, earned the club’s Lamar Haley Community Service Award. “Our club is a collection of true people of action.”

This year’s Rotary International theme is “Rotary Opens Opportunities,” which RI President-elect Holger Knaack explained as a call to Rotarians to “create opportunities that strengthen their leadership, help put service ideas into action, and improve the lives of those in need.”

Moore said he is focused on continuing to grow the club’s membership, while also working to engage existing members in service, resulting in his creation of a new role: member engagement chair, which will be filled by Past President Lynn Epps of Cherokee County State Court.

Past President Williams passed the gavel to President Moore as part of the celebration, made remarks about the past year’s successes, and presented awards, including announcing that the club had earned the Presidential Citation with Platinum Designation, the highest honor bestowed upon Rotary Clubs.

The Club’s honors for the past year also include, from Rotary District 6910: the Gold Club Award for overall excellence, which the Club has earned for 11 consecutive years; Club of the Year runner-up; Club Membership Awards for both Highest Net Increase and Highest Percentage Increase; Club Innovation Award; and the Public Image Award; the Club also earned the Public Image Citation for the larger regional Zone. Its net membership saw the largest increase of all Rotary Clubs in the District, rising from 43 to 60 members.

“It has been an honor to serve you this year,” Past President Williams said, noting the club’s impressive membership growth and fundraising, despite the impact of the pandemic, and the work by all Rotarians to achieve those goals. “My job was making sure the ship goes forward. You make the ship go forward.”

The awards bestowed included the prestigious Coxe Award to the Rotarian of the Year, which was presented to Rogers, who served for the past year in numerous club roles including Youth Services Chair and Family of Rotary Chair.

“I feel so honored to receive this award,” said Rogers, whose selection was a unanimous decision by the awards committee made up of past winners. “This award could go to so many people. I’m so honored to call you all friends and family.”