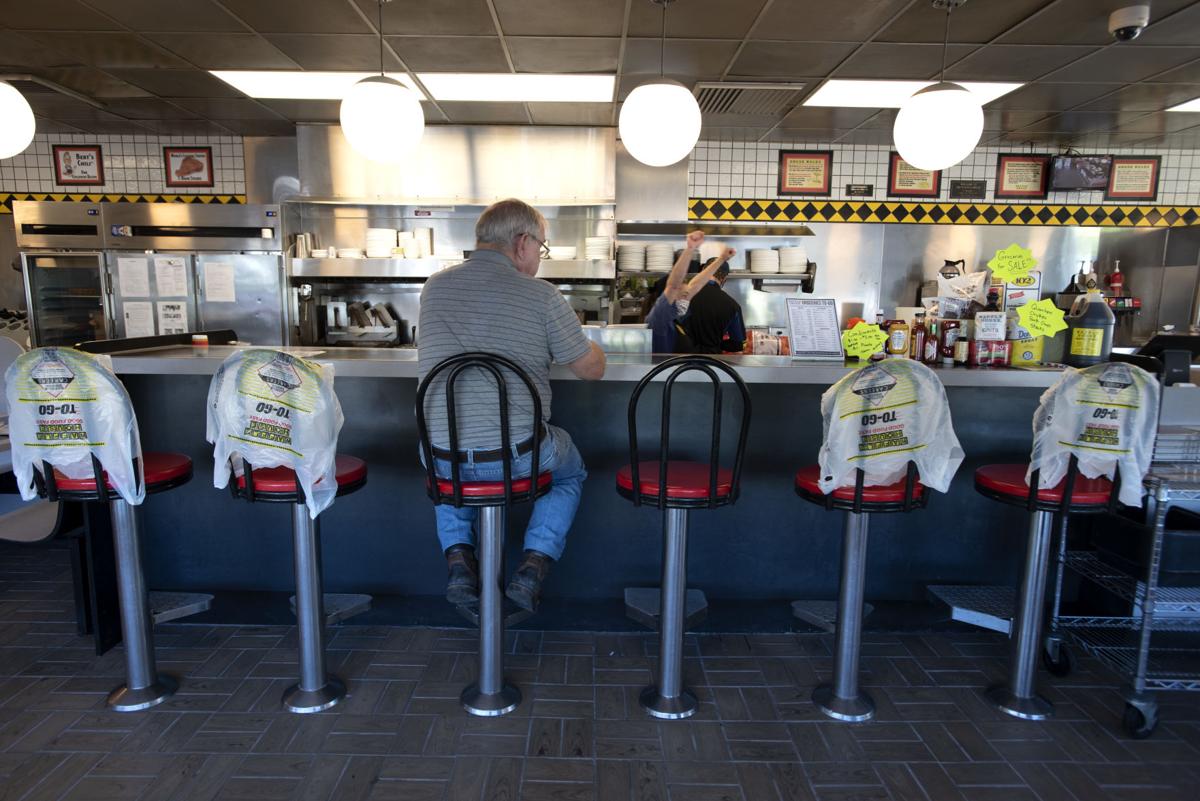 Waffle House restaurants, well-known chain throughout the Southern U.S., were among the first to open to inside dining Monday as Georgia lifted restrictions due to the concerns about COVID-19 infections. Pictured: a happy server shouts with joy as a customer gives his order at the counter, surrounded by blocked-off seats to ensure physical distance between customers. 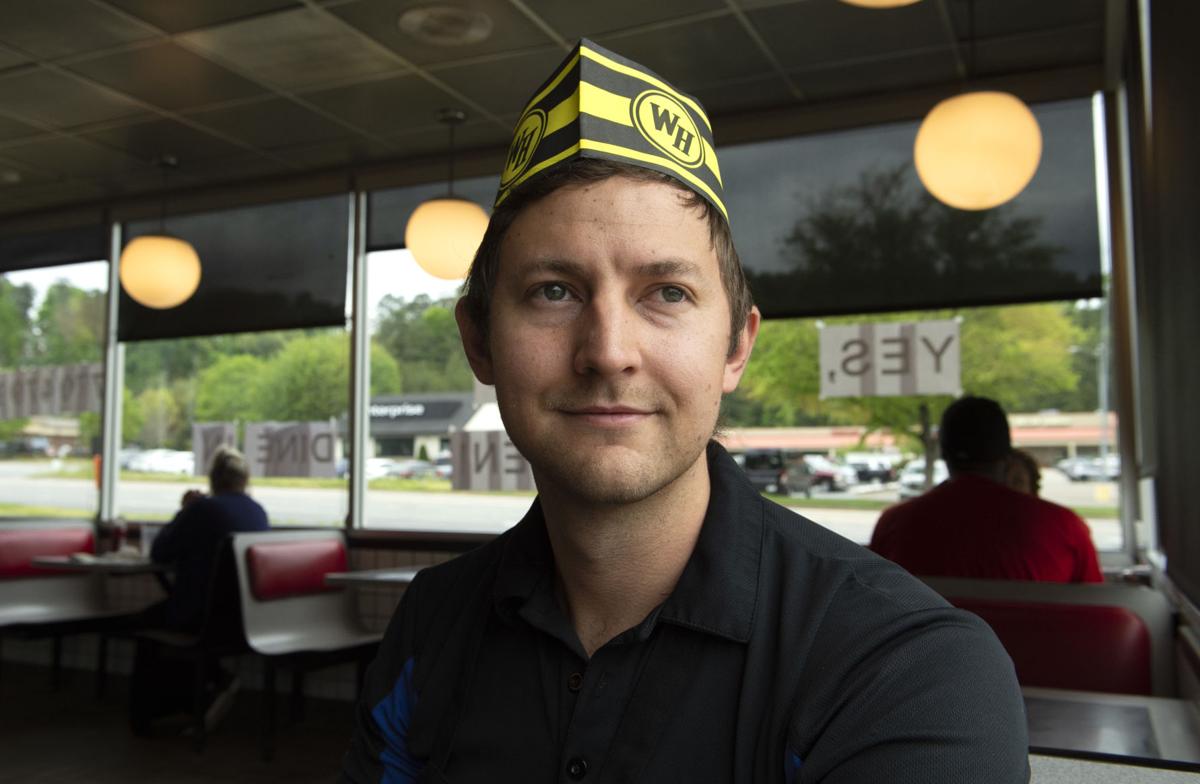 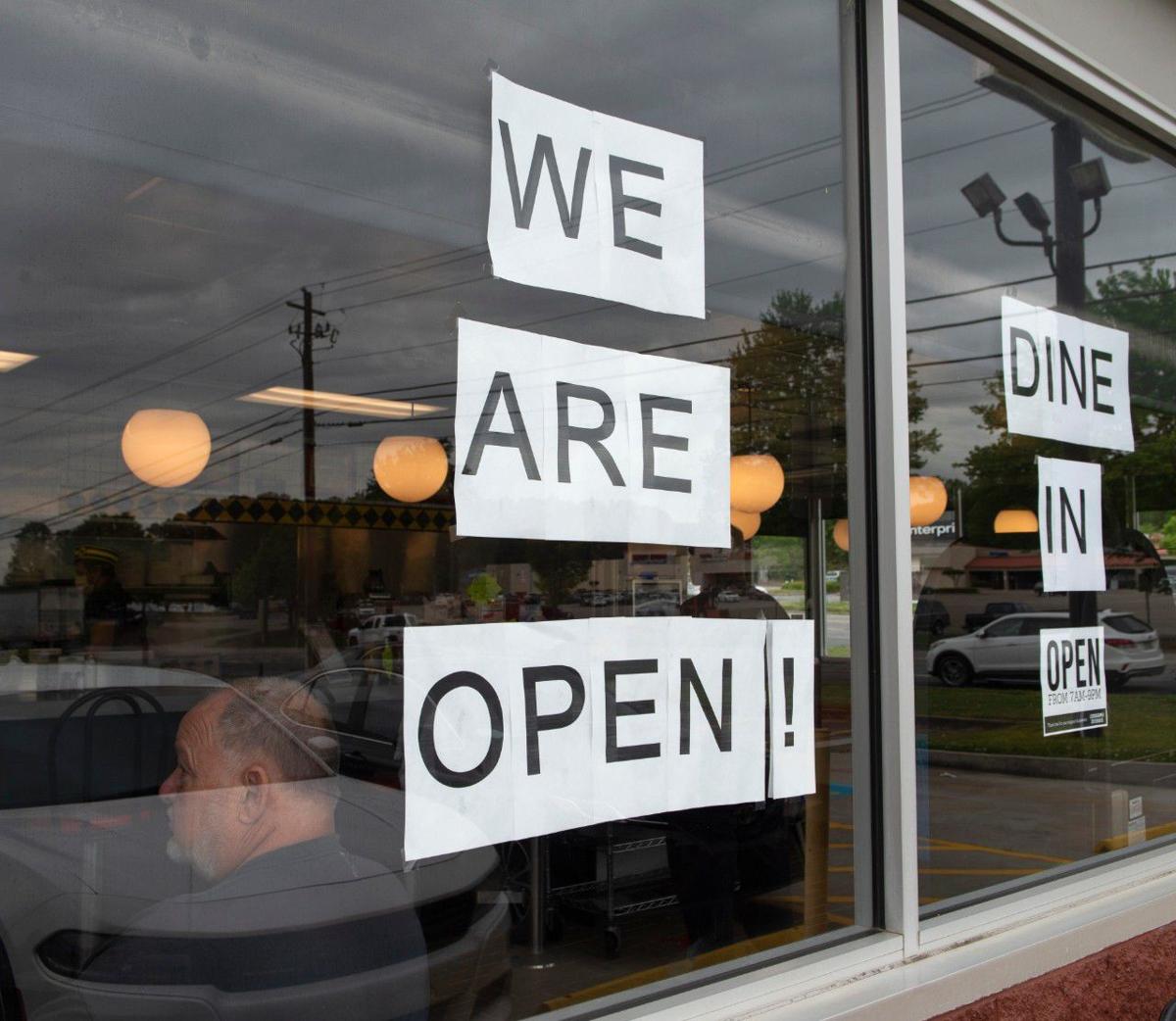 Waffle House locations are among the restaurants that opened for inside dining last week in Cherokee County. 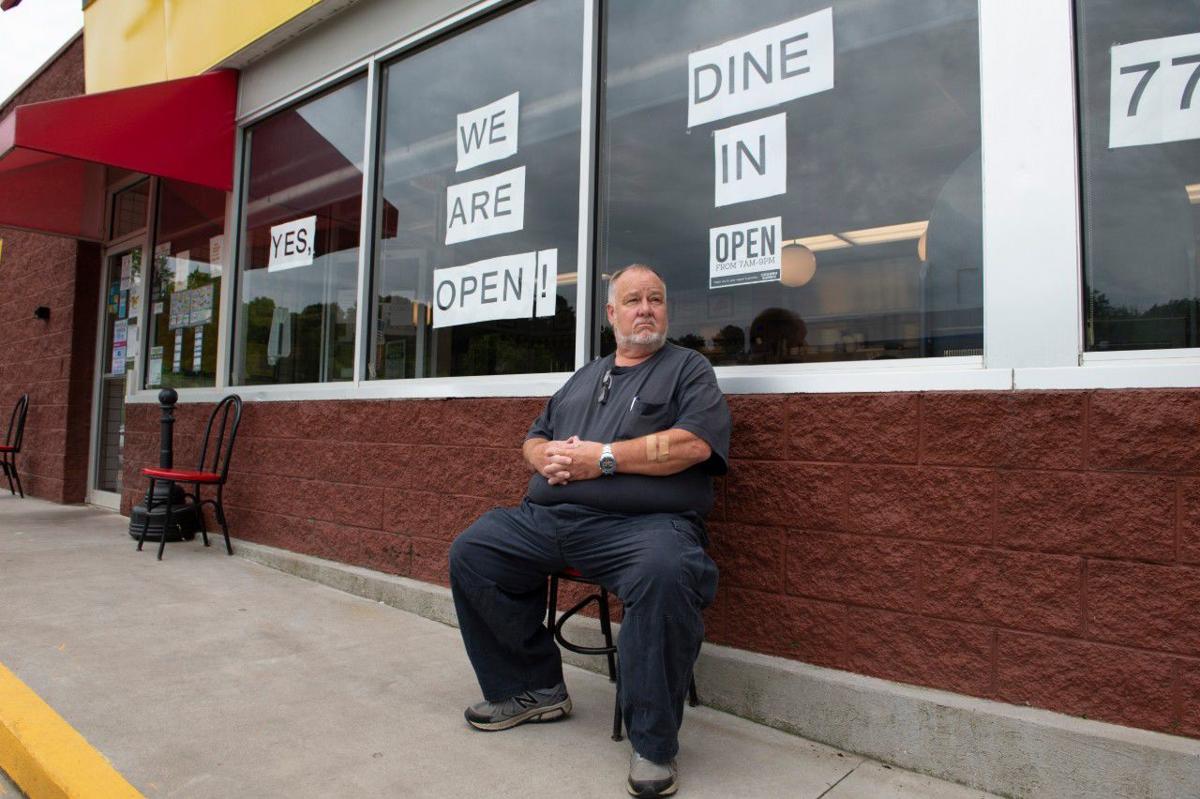 Diners may wait outside Waffle House for a seat to open up inside. 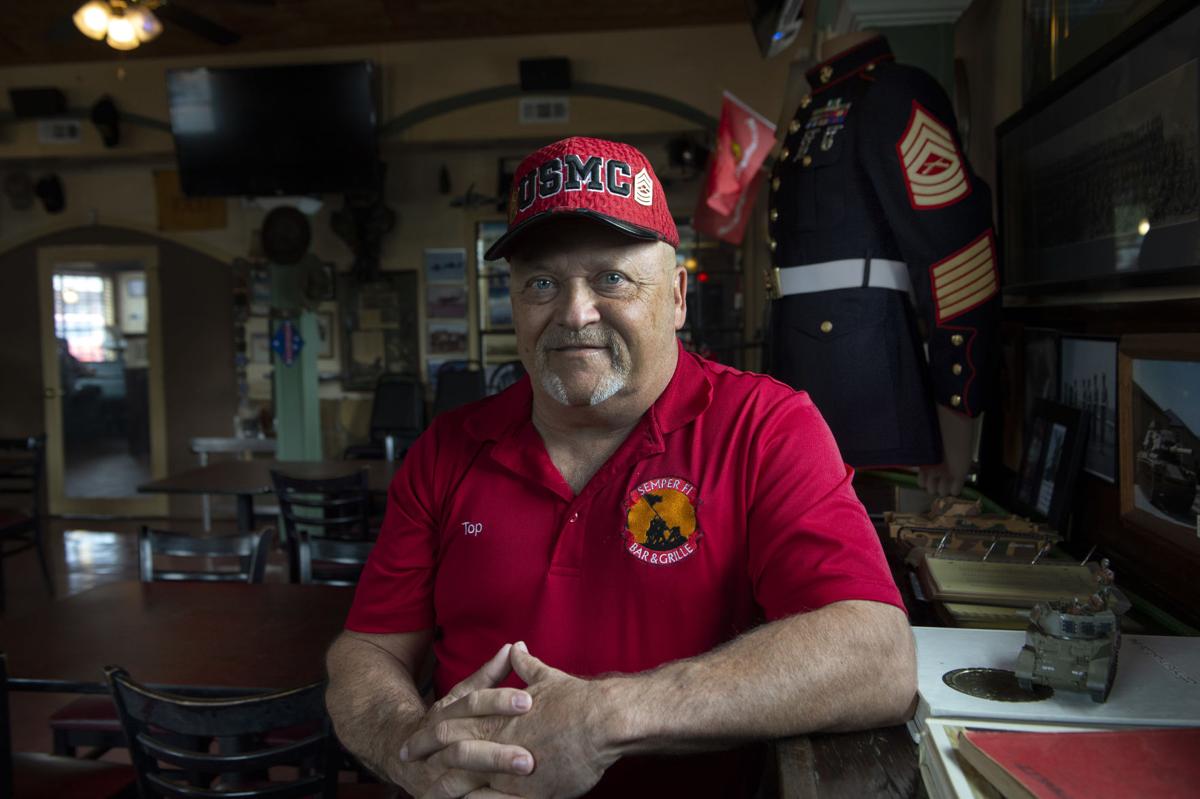 Ralph “Top” Roeger, 61, owner of the Semper Fi Bar and Grille in Woodstock, said his restaurant’s dining room will reopen next week after more than a month’s mandated shutdown due to the COVID-19 pandemic

Waffle House restaurants, well-known chain throughout the Southern U.S., were among the first to open to inside dining Monday as Georgia lifted restrictions due to the concerns about COVID-19 infections. Pictured: a happy server shouts with joy as a customer gives his order at the counter, surrounded by blocked-off seats to ensure physical distance between customers.

Waffle House locations are among the restaurants that opened for inside dining last week in Cherokee County.

Diners may wait outside Waffle House for a seat to open up inside.

Ralph “Top” Roeger, 61, owner of the Semper Fi Bar and Grille in Woodstock, said his restaurant’s dining room will reopen next week after more than a month’s mandated shutdown due to the COVID-19 pandemic

For Kai Abrahams and hundreds more restaurant owners and employees throughout Georgia, anxiety and stress were both unwanted menu items as some statewide COVID-19 restrictions were lifted last week, allowing dining to return to some degree of normal.

“It’s a new normal, that is for sure,” said Abrahams, 30, a district manager for four Waffle House restaurants in Cobb, Cherokee and Fulton counties, who helped his staffs reopen for inside dining – with strict social distancing and safety measures observed.

“Last Monday was the first day we could resume serving customers inside,” Abrahams said. “We were hopeful that customers would return, but we knew it would be a gradual process as people start to feel more comfortable getting out of their homes.” His restaurants, as most restaurants across the state, survived the mandated dining room closures by providing take-out meals to customers.

“But we’re back out here making it happen, taking care of the customers and the stores. We made sure to have everything together for our customers that are coming back. The first day opening back up was a little slow. We only had a handful of guests all day, and we still did a lot of to-go orders. Everyone was getting used to the idea of coming back. People were thinking, ‘should we go out, or should we not?’ There was a lot of conflicting information on the news, like (Gov.) Kemp saying it was okay, but then Trump would say it’s not a good idea. But with all the protocols we have in place – the sanitation and the face masks — that eased everyone’s mind,” he said. “We’re picking back up.”

A mainstay of southern culture that was birthed in Atlanta, in 1955, the chain has just under 2,000 stores. Abrahams, 30, has worked for the chain for four years. His restaurants are not yet fully staffed. ” Our volume isn’t what it was before all this virus stiff happened,” he said. “But today, we added a second cook, and we added more staff on our second shift. We’re still not open on the third shift – 9 p.m. to 7 a.m. – until we see our volume increase to merit it. We’re hoping that happens in the next week or two.”

Customers are now tipping better, he said. “They understand what we’re going through, and putting our lives on the line. It’s an epidemic and there’s a lot of people coming in and out. People know we’re working hard and doing our best to keep the stores open. They appreciate it and reward us for it.”

“It’s that diner experience. You see friendly faces every day. You get to know the customers, and they get to know you. We’re just so connected to our communities, and that’s why people keep coming back,” Abrahams said. “I think people really missed us doing the lockdown. For our regular customers, this is the place they get to come and interact. When the lockdown happened, they didn’t have a [place to interact with anybody. Sometimes they don’t have family or they don’t have friends. For a lot of them, the staffs at our stores become their families, and they’re grateful to be able to come here and joke, have a good time, and get back to some sense of normalcy – whatever that new normal turns out to be.”

Ralph Roeger, 61, a U.S. Marine Corps veteran who launched the Semper Fi Bar and Grill in Woodstock five years ago, managed to pivot his staff from a thriving dining room business to a sustainable to-go operation in a matter of days when the state’s COVID-19 inside dining mandates were issued.

“I don’t think anyone knew what was happening at first. The governor said we needed to stay six feet apart so we did that, and blocked off tables. But that only lasted three days. Then we closed down the dining room, so we had to pivot quickly. We didn’t have any choice, and as we say in the corps, failure was not an option. So, we immediately went into takeout mode, and to be honest, it wasn’t that tough of a pivot. We served 900 takeout meals in the first two days,” he said. Roeger kept the kitchen crew busy but didn’t servers, so they received unemployment benefits. “But we stayed in touch with everyone and let them know we plan to reopen our dining room next week. Every one of our employees is coming back,” he said.

“We have such a loyal following. Close to 80 per cent of our customers are veterans, or they’re families of veterans. They kept us going during this tough time, and we’re so grateful to them for helping us to thrive. And because many restaurants shut down completely, we got a lot of new customers as well, so it’s been good. We survived it. And now there’s a pent-up demand to go out to eat. When we open up our dining room Tuesday, it will be a party.”