The Latest: Spain to end quarantine for tourist… 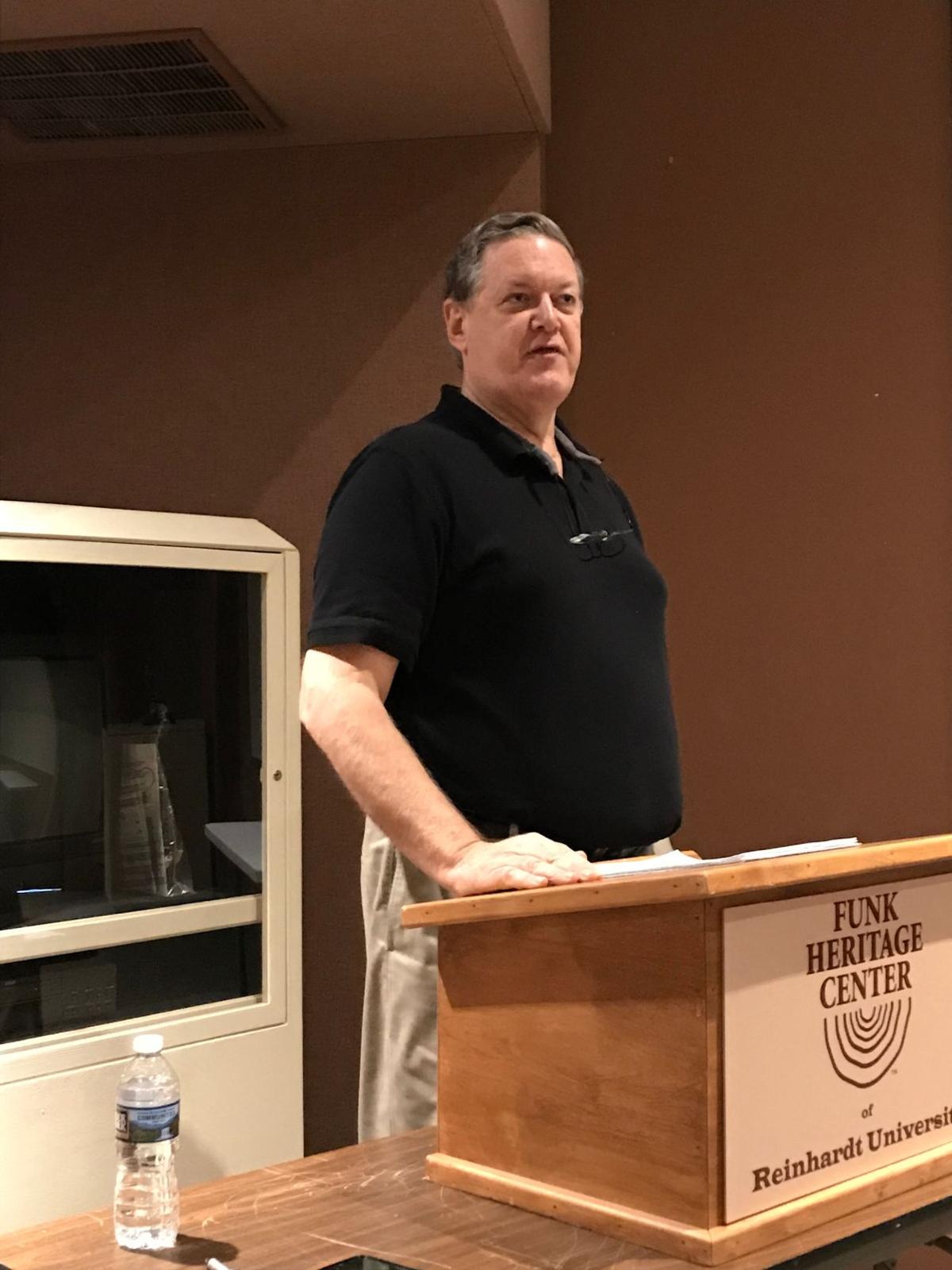 Dr. Steve Goodson from the University of West Georgia recently gave a presentation on some of the history of country music in Atlanta, including how the first recording of a country song was done in a building on Nassau Street. 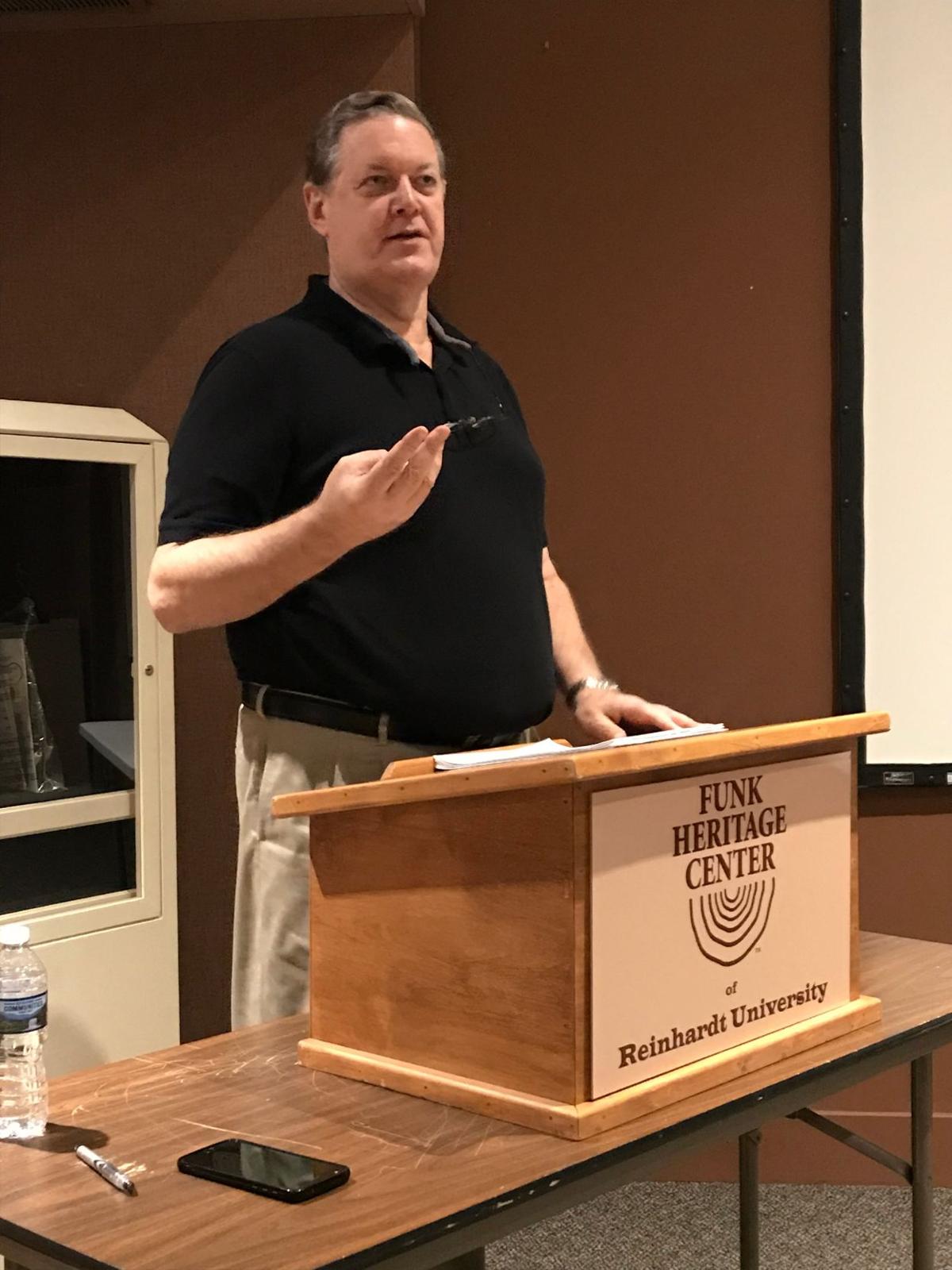 Dr. Steve Goodson from the University of West Georgia visited the Funk Heritage Center on Oct. 17 to give a presentation about some of the history of country music in Atlanta, including how Fiddlin’ John Carson recorded the first country music song in a building on Nassau Street.

Dr. Steve Goodson from the University of West Georgia recently gave a presentation on some of the history of country music in Atlanta, including how the first recording of a country song was done in a building on Nassau Street.

Dr. Steve Goodson from the University of West Georgia visited the Funk Heritage Center on Oct. 17 to give a presentation about some of the history of country music in Atlanta, including how Fiddlin’ John Carson recorded the first country music song in a building on Nassau Street.

This story has been updated from its original version to correct an error.

WALESKA — One could almost hear the fiddle music in the air as Dr. Steve Goodson from the University of West Georgia recently spoke at the Funk Heritage Center about the history of country music in North Georgia.

Although the term “country music” immediately calls to mind images of Nashville, Tennessee, Goodson said it was actually in Atlanta where the first country music song was ever recorded. In the narrative he presented, Goodson explained how there were three main characters involved — Fiddlin’ John Carson, Ralph Peer and the city of Atlanta itself.

In the aftermath of the Civil War, Atlanta attempted to reinvent itself as a flagship city of the “New South.” At the time, there were a multitude of voices and opinions trying to shape Atlanta as it moved forward, including those who saw opera and classical music as morally pure. The efforts of these individuals in shaping the city proved to be successful, as in 1909, Atlanta hosted the Great Southern Music Festival to help open the new municipal auditorium, with some of the festival’s entertainment including major opera stars and the Dresden Philharmonic of Germany. The following year, the New York Metropolitan Opera began making annual visits to perform in Atlanta. Both the music festival and the opera visits garnered a great deal of positive press from local newspapers, with some of the articles claiming no finer entertainment had ever been seen on Earth before.

Although Atlanta was pushing to become a center of higher culture, more traditional Southern music and entertainment was still popular in the city as well. Goodson mentioned how, in 1913, the first Georgia Old-Time Fiddlers’ Convention was held, which was also given positive coverage, but this coverage was more light-hearted. For example, one news report described the event as, “less than a shindig, being somewhere between a thingamajig and a dololly.” This convention was held annually until the 1930s and was a way the population could remember what, to them, was a simpler time and was also a more inclusive form of entertainment when compared to the opera and classical music. Similarly, the radio station WSB had recently been established in Atlanta and had a powerful enough signal to reach listeners throughout much of the Southeast. In order to fill the station’s programming, anyone with any kind of musical talent could be invited to perform live on the radio, meaning a classically-trained piano player might be followed by a traditional Southern string band, then an opera singer.

The second key player, Ralph Peer, was born in Missouri in 1892 and became interested in the music and recording industry after spending many of his earlier years helping out in his father’s business, eventually going to work for Okeh Records. Okeh was founded shortly after the First World War and, as it did not have as much pull as some of the recording giants like Victor or Columbia, Okeh made the decision to go into more underserved markets. For example, Okeh recorded the African-American singer Mamie Smith performing “Crazy Blues,” which sold 75,000 copies in its first month and led the company to develop a line of records known as “race records,” featuring African-American musicians and marketed heavily toward the African-American community. Realizing how big this could get for the company, Peer began pushing to take a set of recording equipment south with him and record artists in places like Atlanta, which Okeh approved. Peer arrived in Atlanta in 1923, rented a room in a building at 152 Nassau St. and began scouting out African-American musicians to record.

Lastly, Fiddlin’ John Carson was born in Fannin County shortly after the Civil War and moved to Atlanta around 1900 to take a job in a textile mill. Shortly after WSB began broadcasting, Carson went down to the station with his fiddle and asked to go on the air. With his talent, he appeared fairly regularly on WSB for several years, and since his performances could be carried for miles over the airwaves, Carson believed his time on WSB helped make him famous.

It was during Peer’s 1923 trip to Atlanta that Polk Brockman, who owned a furniture store in the city and helped distribute Okeh records in the area, suggested bringing Fiddlin’ John Carson in for a recording session. Carson came to the studio and recorded two songs for Okeh, “The Little Old Log Cabin in the Lane” and “The Old Hen Cackled and the Rooster’s Going to Crow.” Although there were issues with the recording, as the design of recording equipment at the time was more for capturing voices and made it more difficult to record Carson both singing and playing the fiddle, Peer returned to New York with what had been recorded and had an initial pressing of 500 records produced. According to Goodson, these 500 records were sent to Atlanta, which quickly sold out and led Brockman to request an additional 10,000 copies from Okeh. This led the company to realize how big of an untapped market country music was and began moving to expand this recording line as well, which grew and became arguably one of the more popular lines Okeh offered its customers.

With Atlanta showing such potential to become the home of the country music industry, why did it come to reside in Nashville? Goodson said this could be traced to the fact that the manager of WSB at the time was not as big on country music as he was other musical genres. At the same time, a radio station in Nashville, possibly the only station in the Southeast that had as powerful of a signal as WSB, had management that appreciated country music, while there were also a number of relatively big advocates for the genre in the city, which was something else Atlanta lacked.

For a number of years, the exact building on Nassau Street where Fiddlin’ John Carson recorded his performance was not known. However, in 2017, an Atlanta architect discovered information that pointed to the building at 152 Nassau St. as being the site in question, which led Atlanta to try and have the building designated as a historic landmark. Despite this, the structure is threatened with demolition. Plans have been moving forward to construct a Jimmy Buffet’s Margaritaville hotel and restaurant on the site that includes 152 Nassau St., although the fight between the city trying to preserve the building and the resort company wanting to redevelop the site has gone to court and a final decision on the fate of the building remains to be determined. Some of the building has already been demolished, but the portion that would have been used by Peer to record for Okeh remains standing, according to Goodson.

Goodson took a couple of questions from members of the audience, including why Bristol, on the Tennessee-Virginia border claims itself as the birthplace of country music and what got him interested in studying this part of American history. Goodson said there is a great deal of significant country music history in Bristol, as a handful of recording sessions that were held there in the late 1920s brought in even larger names of early country music than those who had recorded in Atlanta earlier in the decade, and thus Bristol does have a legitimate claim to the title “Birthplace of Country Music,” while Goodson explained he has been passionate about music for many years, which led to pursuing this.

“This is one of the things I like doing most,” Goodson said after the presentation. “I always enjoy doing talks like this. I hope everyone here takes away a greater knowledge of Atlanta’s role in country music and the people involved with this story.”

The Funk Heritage Center will be busy every Thursday this month, hosting a lineup of scholars and educators for the next installment of its re…

Despite being closed as a result of the ongoing COVID-19 outbreak, the Funk Heritage Center is launching a new program to help the public expe…