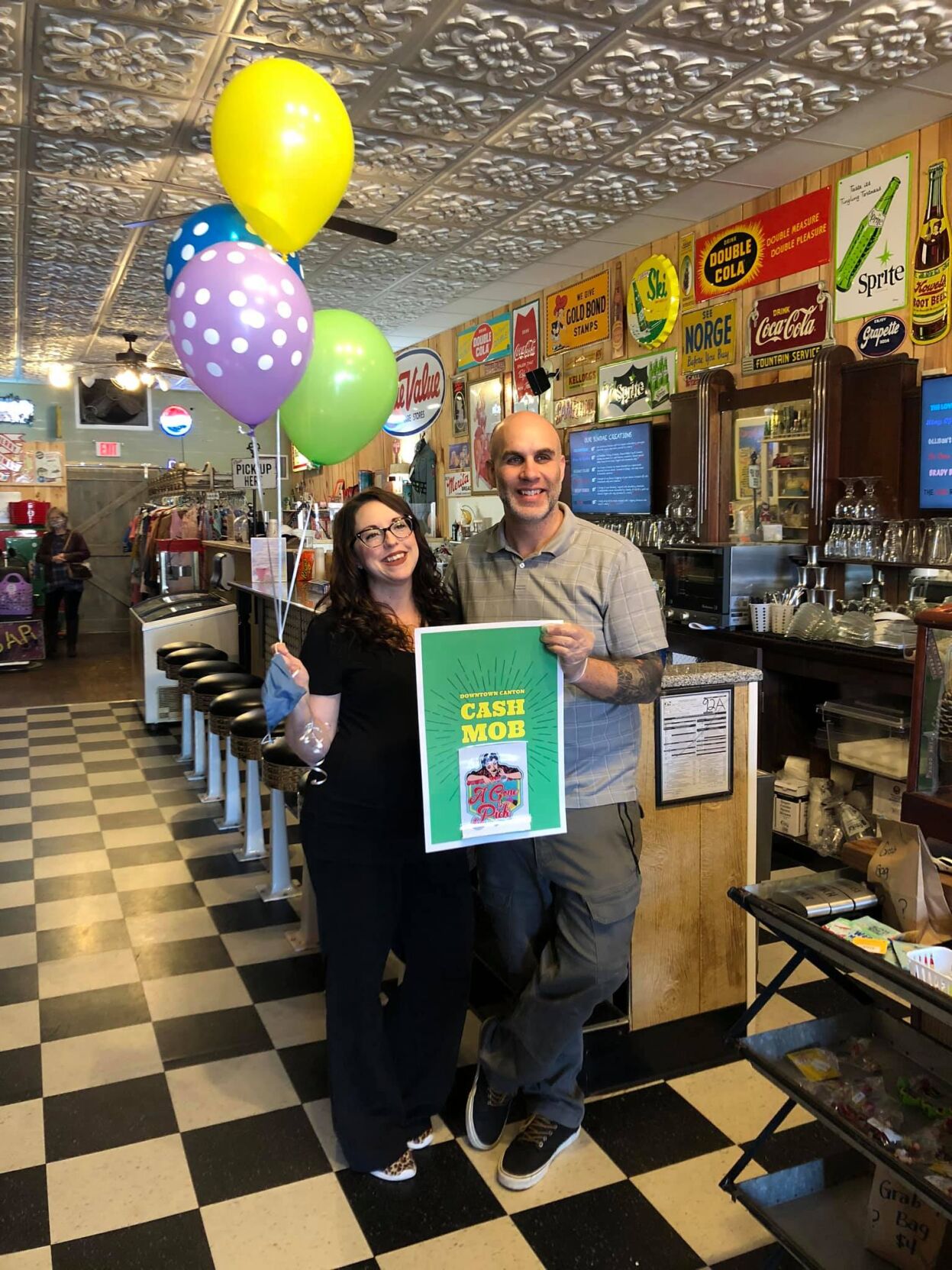 A new promotion in Canton created by Downtown Development Manager Velinda Hardy called the “Downtown Canton Cash Mob” is spotlighting small businesses throughout the downtown area in an effort to boost exposure and business. This first business to be highlighted is A Cone to Pick. 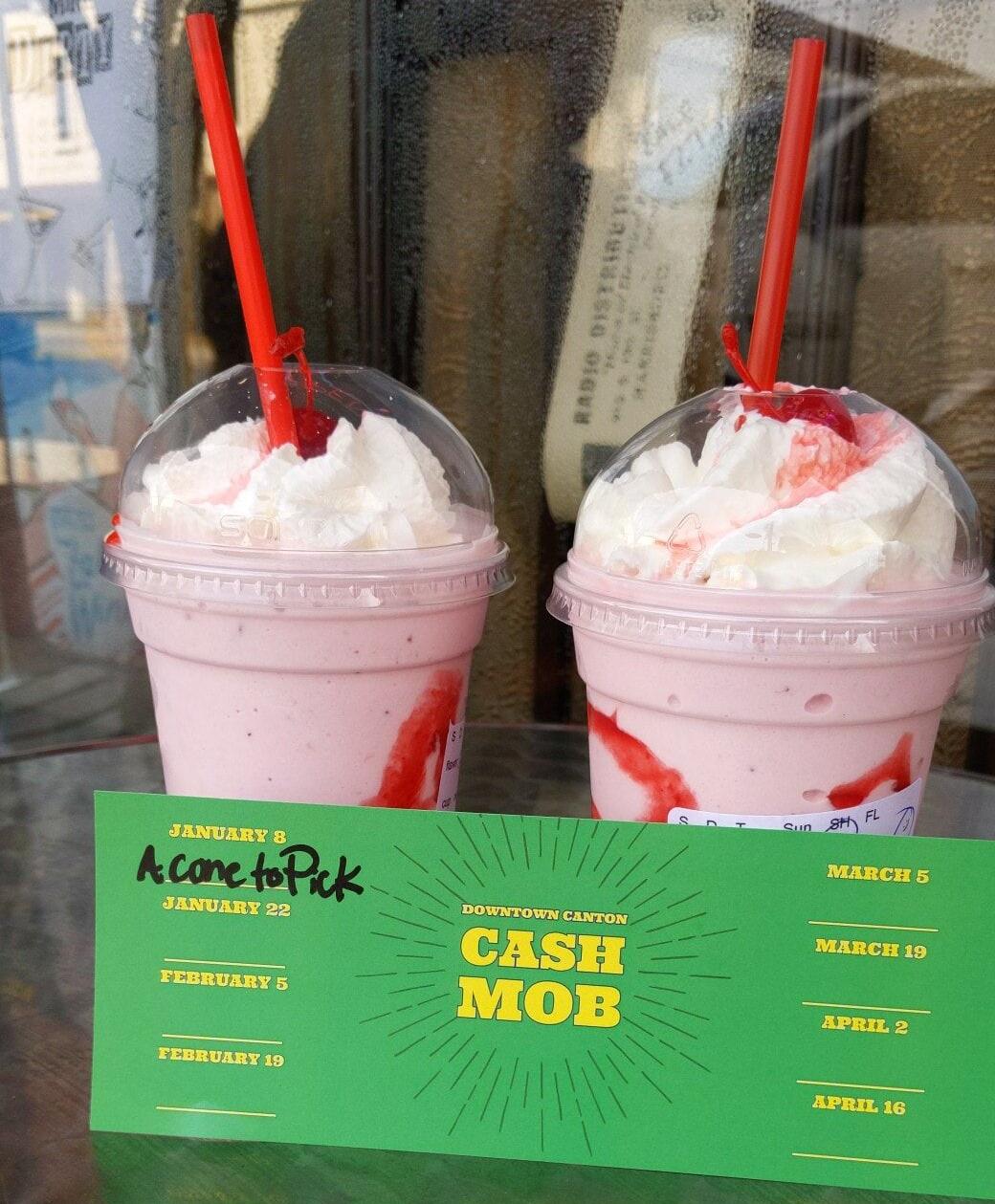 Shoppers will pick up a passport from A Cone to Pick, or whatever business is being highlighted at the time, and will have it signed when they spend $20 or more at the business. People that have all eight slots filled on the passport can enter into a contest to win various gifts.

A new promotion in Canton created by Downtown Development Manager Velinda Hardy called the “Downtown Canton Cash Mob” is spotlighting small businesses throughout the downtown area in an effort to boost exposure and business. This first business to be highlighted is A Cone to Pick.

Shoppers will pick up a passport from A Cone to Pick, or whatever business is being highlighted at the time, and will have it signed when they spend $20 or more at the business. People that have all eight slots filled on the passport can enter into a contest to win various gifts.

A new promotion in Canton created by Downtown Development Manager Velinda Hardy called the “Downtown Canton Cash Mob” is spotlighting small businesses throughout the downtown area in an effort to boost exposure and business.

“The concept behind this promotion is to draw people to the downtown area and support the small businesses located throughout,” Hardy said. “The way the promotion works is I will randomly draw the name of a downtown business or restaurant from separate categorized bags so no two businesses or restaurants will be selected back-to-back, giving this promotion the element of surprise like a flash mob. The business will then be highlighted for a two-week period.”

Shoppers and restaurant-goers who participate in the “Cash Mob” will pick up a “passport” from any of the selected businesses upon spending $20 or more at the business. The passport will be used and signed at every highlighted location over the next few months, with a possible prize coming at the end of the promotion for the people who filled up the passport.

“I created a passport that has eight different dates on it, leading up to April 16,” Hardy said. “So they will stop by A Cone to Pick, which is currently spotlighted, to pick up the passport and every time another business is announced, they will go into that business and get their passport signed if they spend $20. They will keep spending the $20 at these businesses or restaurants and then on April 16 we will ask that people turn in their passport to any of the eight businesses that were visited and I will gather those up and draw two winners. The winners will receive gift bags with a $20 gift card to each one of the eight businesses that were selected, as well as a few additional items.”

Hardy said the incentive is that the winners of the gift cards, as well as the shoppers and restaurant-goers who participated, will want to come back to these places again and again.

This promotion was set up by Hardy on Jan. 4 behind the idea of finding a creative way to help out small businesses in the downtown area during a time where less people are shopping. Hardy said she had an idea to set up a private group on Facebook consisting of community residents who want to support these local businesses. Little did she know, the group would end up exceeding the 1,500 mark in members, with over 1,700 in counting currently a part of the Facebook group.

“I invited friends of mine on Facebook to join this group, which is how it got started,” Hardy said. “I then told them to invite their friends and it just continued to grow and grow. I thought we would be lucky to have 300 people by the time we announced the first business that Wednesday. We had over 600 by then and it blew my mind. Right now we are at over 1,500 people in the group, so to think about how many of these people will go to spend $20 at these local businesses is exciting.”

Hardy said she did a Facebook live event at Cannon Park to announce the first business to be highlighted. She detailed the process, saying she brought balloons and a sign with her to surprise the owners of A Cone to Pick, Nick and Stefanie Forte, with the news.

“Funny thing about this was that they were a part of the Facebook group I created, so they knew that one of the local businesses or restaurants was going to be selected, but they didn’t know it was going to be them,” Hardy said. “They didn’t see the video I was doing on Facebook live, so they were surprised they were the ones chosen. We did pictures and the live video for the group members to see.”

Stefanie Forte said her shop has seen a surge in business over the last two weeks thanks to the promotion, and is grateful to be chosen to be a part of it.

“We were surprised and grateful to be chosen as the first official stop for the cash mob,” she said. “Hardy always goes above and beyond to create opportunities for us to gain extra foot traffic. This project has exceeded our expectations and has helped our family owned business in this very tough time. We hope that the new exposure to our shop has been met with great experiences for our customers and that they will become return customers as well.”

Hardy said that this promotion is something that she hopes will continue past April, hopefully for years to come. She added that customers are being safe wearing masks and keeping distance, and that the two week time frame helps to decrease the number of people showing up to the business at a time.

The next business to be highlighted, Downtown Kitchen, was announced on Thursday.

The group can be found on Facebook by typing in “Downtown Canton Cash Mob.” It is a private group, so a request is needed to join.