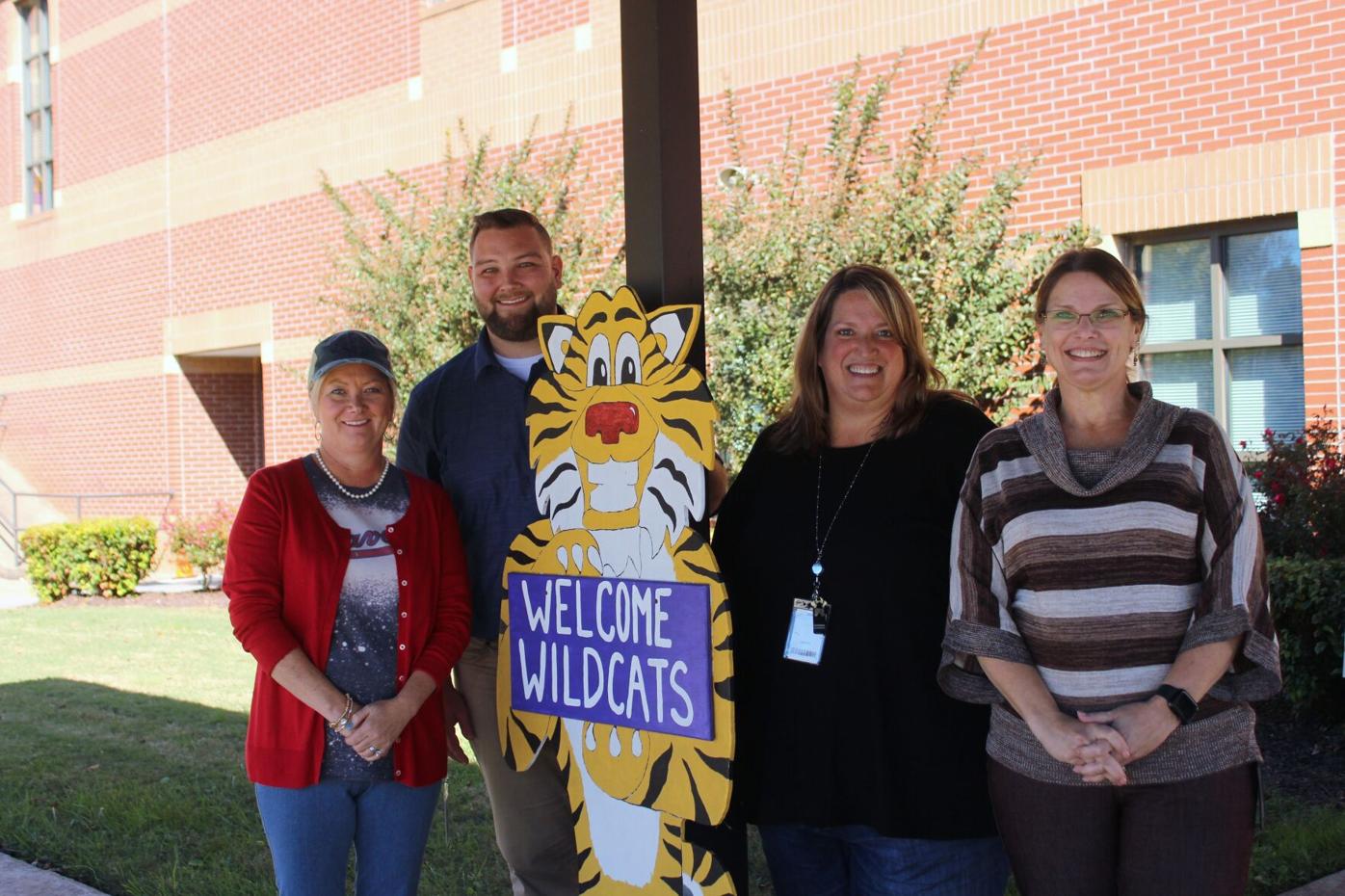 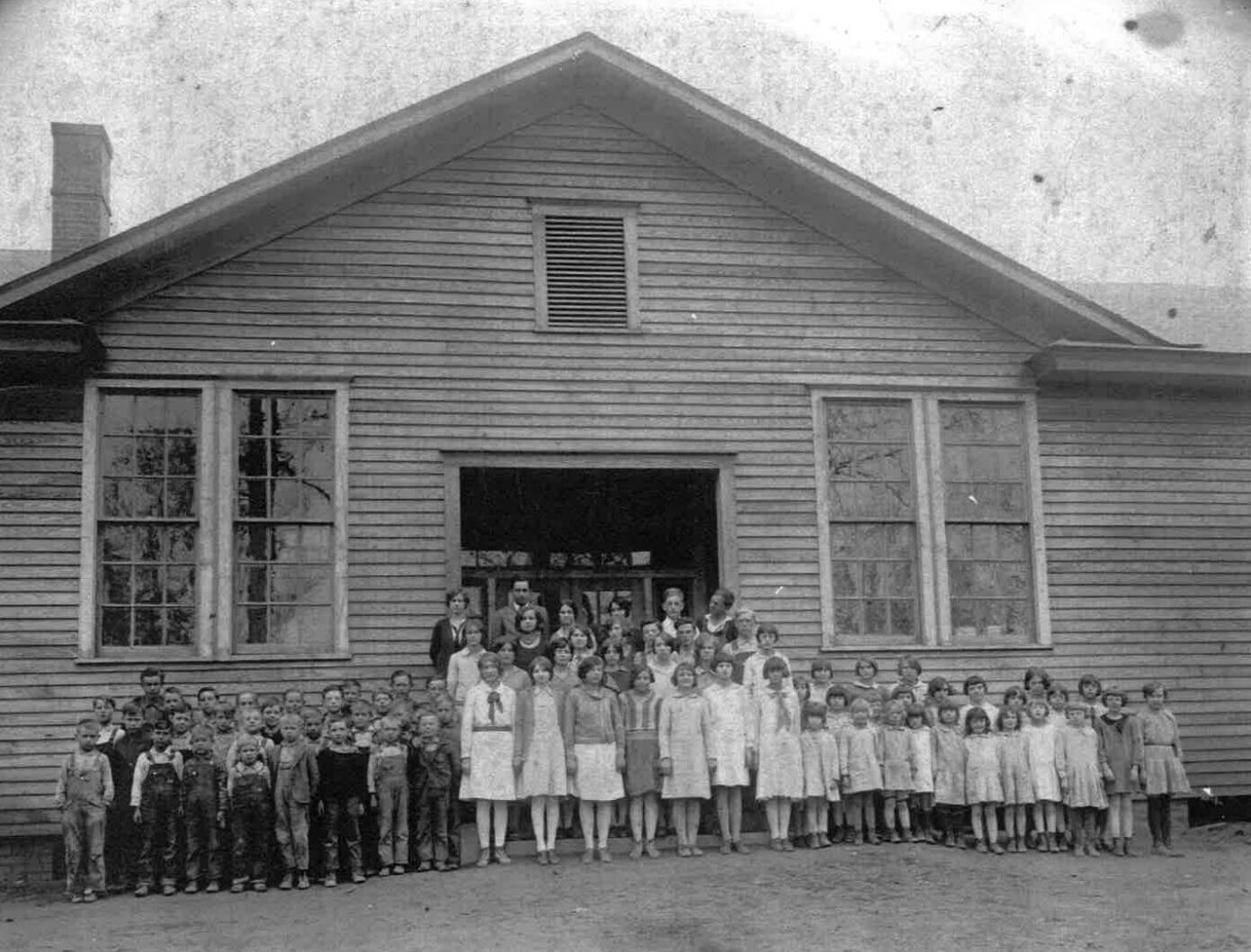 In this photo from the 1920s or 30s, Macedonia Elementary School students and teachers stand outside the school. The original school building opened in 1921. 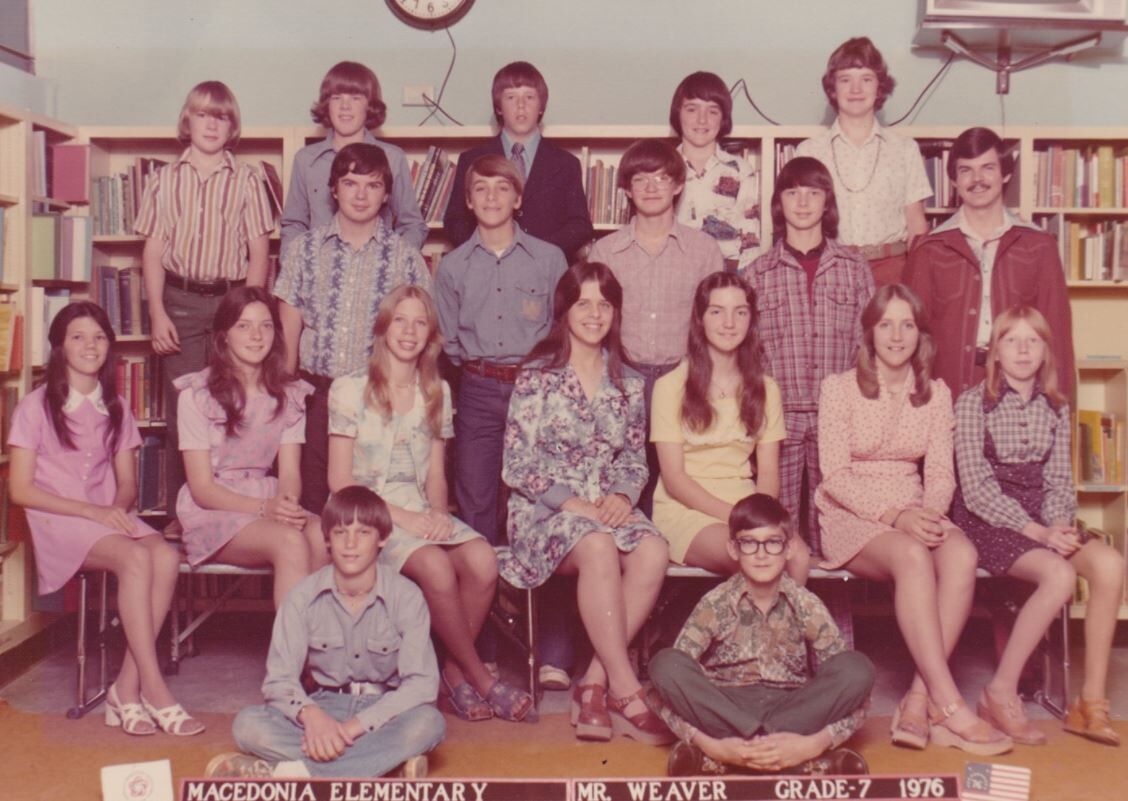 In this 1976 photo, Macedonia Elementary teacher Jack Weaver, right, second row, stands with a class of his students. 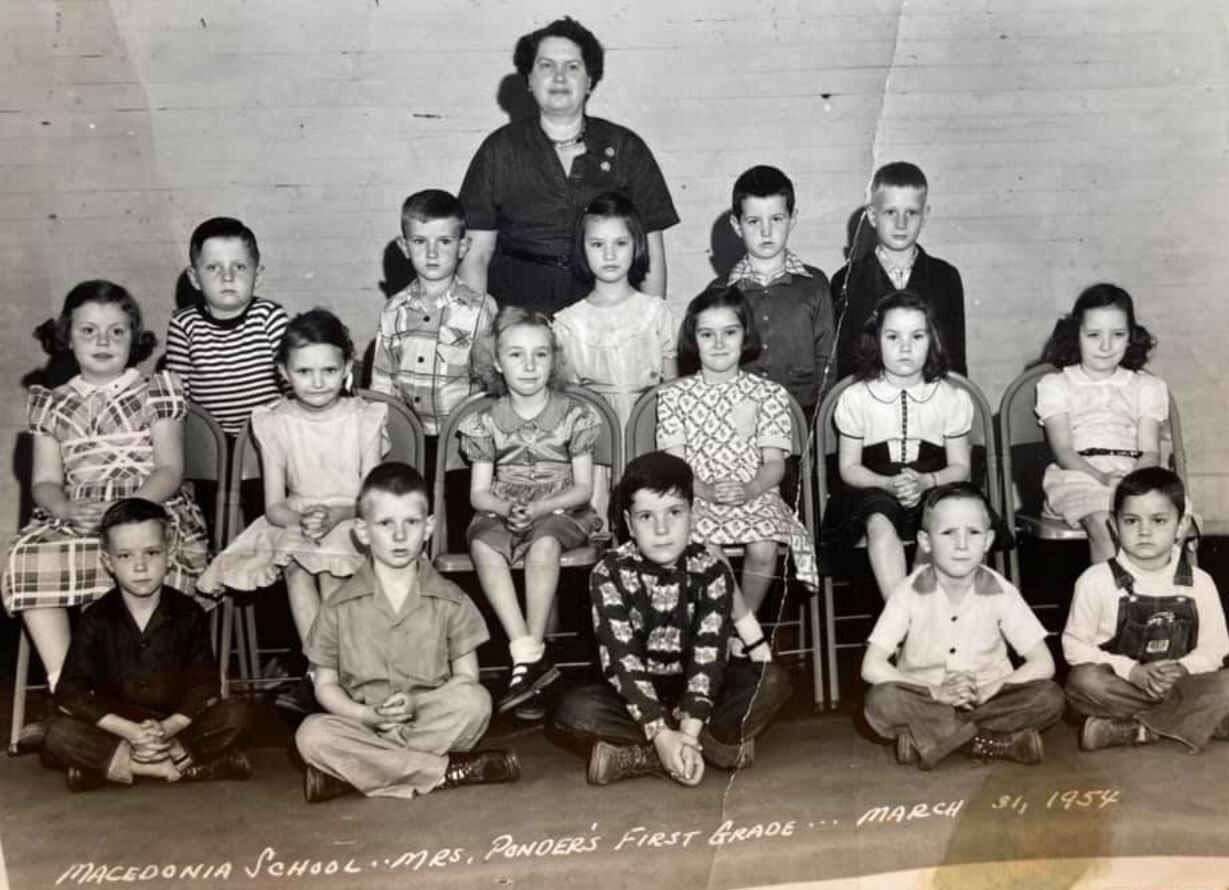 A 1954 photo, shared by a Macedonia graduate, shows Mrs. Ponders and her first grade class. 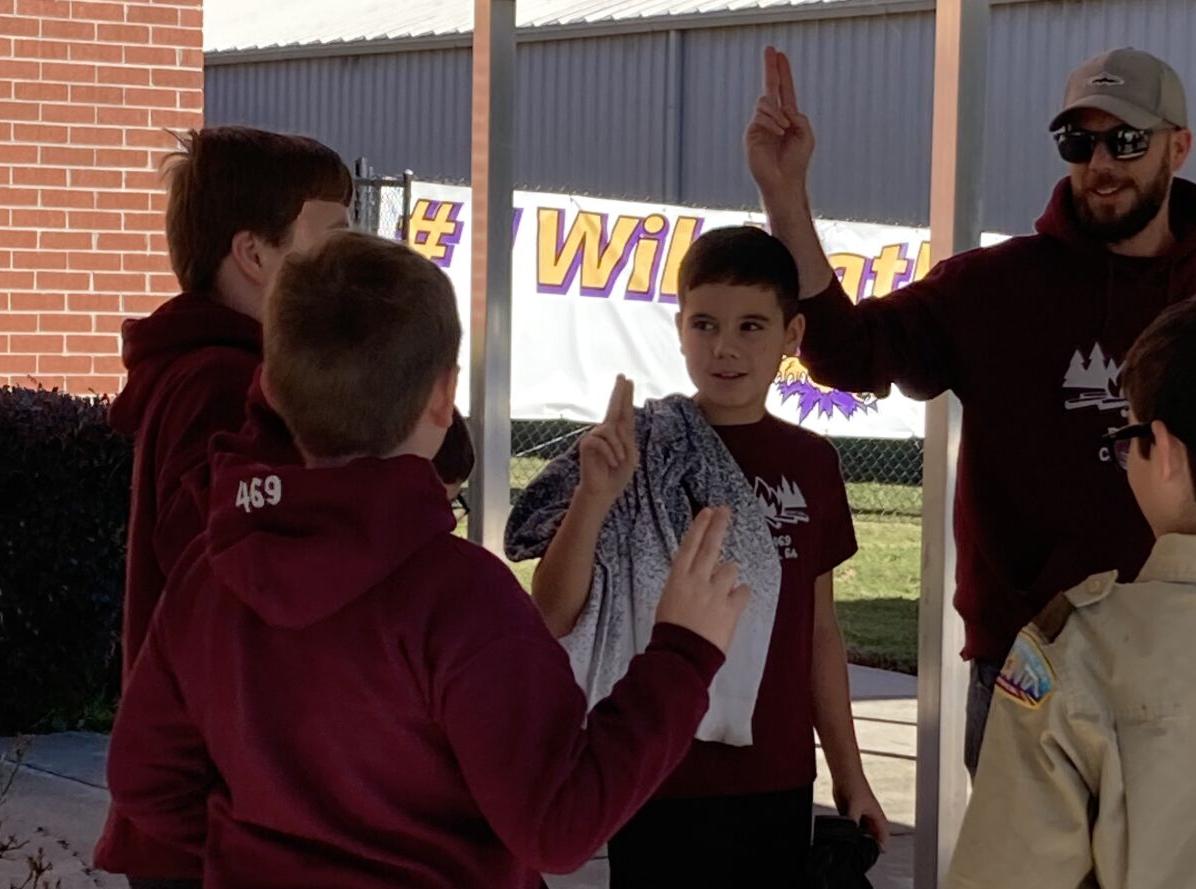 Cub Scouts from Pack 469 cleaned up the grounds at Macedonia Elementary School Sunday ahead of the school’s Centennial Celebration. 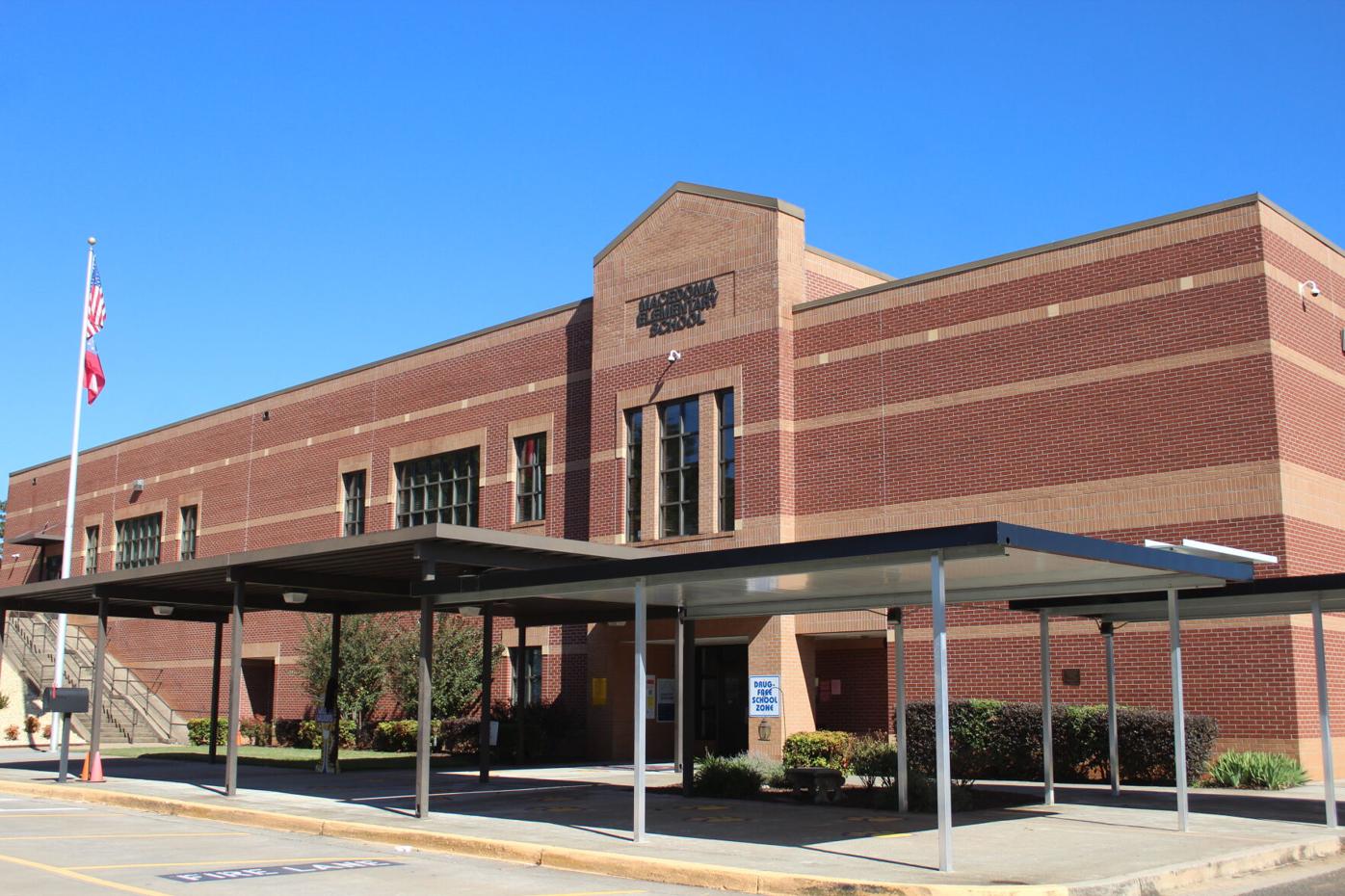 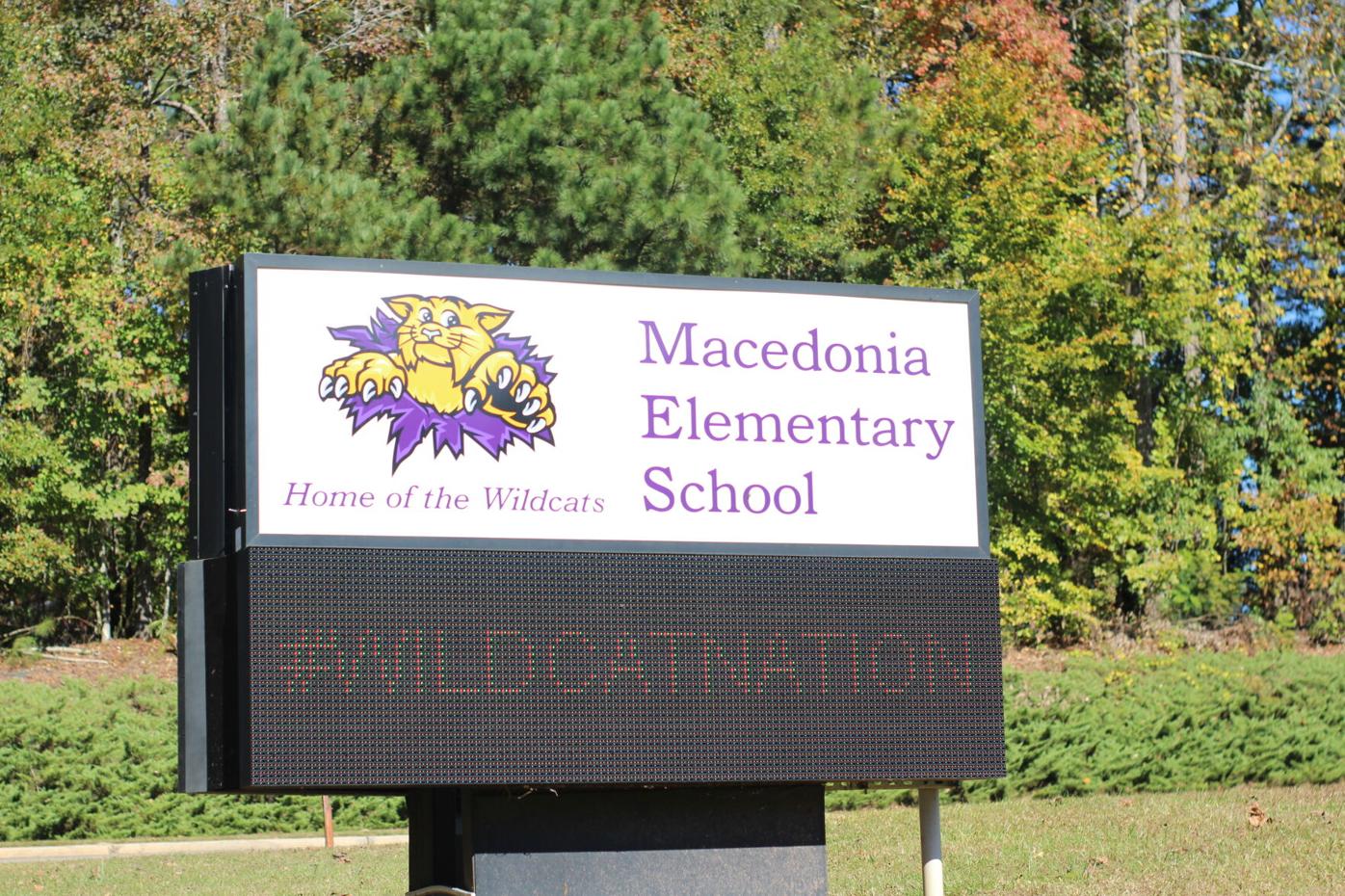 In this photo from the 1920s or 30s, Macedonia Elementary School students and teachers stand outside the school. The original school building opened in 1921.

In this 1976 photo, Macedonia Elementary teacher Jack Weaver, right, second row, stands with a class of his students.

A 1954 photo, shared by a Macedonia graduate, shows Mrs. Ponders and her first grade class.

Cub Scouts from Pack 469 cleaned up the grounds at Macedonia Elementary School Sunday ahead of the school’s Centennial Celebration.

In over a century of teaching and learning at Macedonia Elementary School, one thing doesn’t appear to have changed: the culture of the school and the surrounding community.

“Macedonia has a long history of being extremely connected to their community,” said William Walker, a fourth grade teacher at the school.

The 100-year-mark came around earlier this year, but was held off due to the coronavirus pandemic.

But the doors will be open for the celebration 10 a.m. to noon Saturday, when alumni and families will be able to relive the early days of the school and reunite with teachers and old friends.

The event starts with a special ceremony from 10 to 10:45 a.m. in the school gym, with speakers including Cherokee County Superintendent Brian Hightower, School Board member Patsy Jordan, who represents the area, School Board Chair Kyla Cromer, and former Macedonia principal Jack Weaver.

From 10:45 a.m. to noon, visitors can go to the cafeteria for a reception, the media center for memorabilia and see a photo booth in the Butler building, the second-oldest facility on the campus.

At the reception in the cafeteria, visitors can watch a “decades video” created by Macedonia alum Chloe Feibus.

The theme of the event is “remembering the past, but embracing the future,” Principal Christy Rich said.

The school will have photos and other memorabilia on display that will take alumni back in time.

The committee is asking alumni and former teachers to bring memorabilia to the school from 8 a.m. to 1 p.m. this week to display during the event. Anyone who wants to drop off items outside of school hours is asked to call the school at 770-704-1372.

If the gym is full before the ceremony at 10 a.m., an overflow room is planned to accommodate more guests.

The school, currently at 0370 East Cherokee Drive, hasn’t always been there. When it opened in 1921, it was down the road, Bruce said. But the first school building on the current campus was built in 1957, behind what is now the main building.

“When they built that building, the community built the gym brick by brick,” she said. “They were very invested in the school.”

The school’s parents and neighbors were avid fans of the school’s basketball team, and would show up for many other school events.

More recently, teachers recalled parent volunteers being a constant presence at the school, until last year when, due to the pandemic, schools closed and switched to remote learning. Parents make copies for teachers, organize parties for students to reward good behavior, and find other ways to help out.

“They ask us all through the year, not just in the beginning, when they bring supplies in,” Bruce said. “‘I know you need something, what do you need?’ They’re very giving.”

“This is a very supportive community, and we want to give back for everything they’ve done for us,” she said.

Leading up to the centennial, the committee interviewed the school’s oldest living student, Ruby Milford, and the school’s oldest teacher, Faye Blackwell, to share their memories of decades past at Macedonia Elementary. Many of the questions came from current students at the school, and teachers shared the interviews with their classes.

Milford, 104, was there for the school’s beginning a century ago. “Miss Ruby,” as the teachers affectionately call her, also worked in the cafeteria and recalled people working all summer in a community garden, Walker said. The vegetables there were picked, canned, and later served in school lunches.

Today, a smaller garden at the school provides herbs and other items for students’ meals, Lathem said.

Milford’s family has had five generations at Macedonia Elementary.

“Macedonia for her is a generational thing. She went here, her daughters went here, her grandkids went here. And now her great grandchild is going here as well,” Walker said. “Miss Ruby’s daughter, Helen, wanted us to make sure that we knew that there is a lineage there. And they are very proud of it.”

Blackwell had advice for students that applies to today’s elementary schoolers.

“She called (students) ‘pupils.’ The kids were like, ‘What are those?’” Bruce said.

Students were interested to learn that their predecessors used to bring their lunch to school in pail buckets, and went to the restroom in an outhouse, the teachers said. They also enjoyed seeing photos of the school through the decades, watching students slowly transition to today’s classes.

Preserving the past, embracing the future

“We want to honor and remember that past, but we are embracing the future. We’re excited about where students are going, and we’re excited to be a small part of what great things they’re going to be doing in the future,” Rich said.

As part of the school’s efforts to preserve its history, contributions from students will be on display, to later be put into a time capsule. The plan is for the time capsule to be buried in front of the school, the principal said.

The centennial has also sparked a new school tradition: for the first time, the Macedonia Wildcats have an alma mater, written by music teacher Dalton Hancock.

Written a little over a month ago, the students have had just a few weeks to rehearse the song, but the chorus will be ready to perform it Saturday, the teachers said.

“It’s amazing what the chorus can do,” Bruce said.

One tradition that probably won’t be coming back is a donkey basketball game.

“They were riding donkeys, playing basketball in the gym,” Lathem said, laughing. “We figured we couldn’t pull that one off.”

Macedonia Elementary School students, families, alumni and staff gathered Saturday to celebrate 100 years of teaching and learning at the scho…