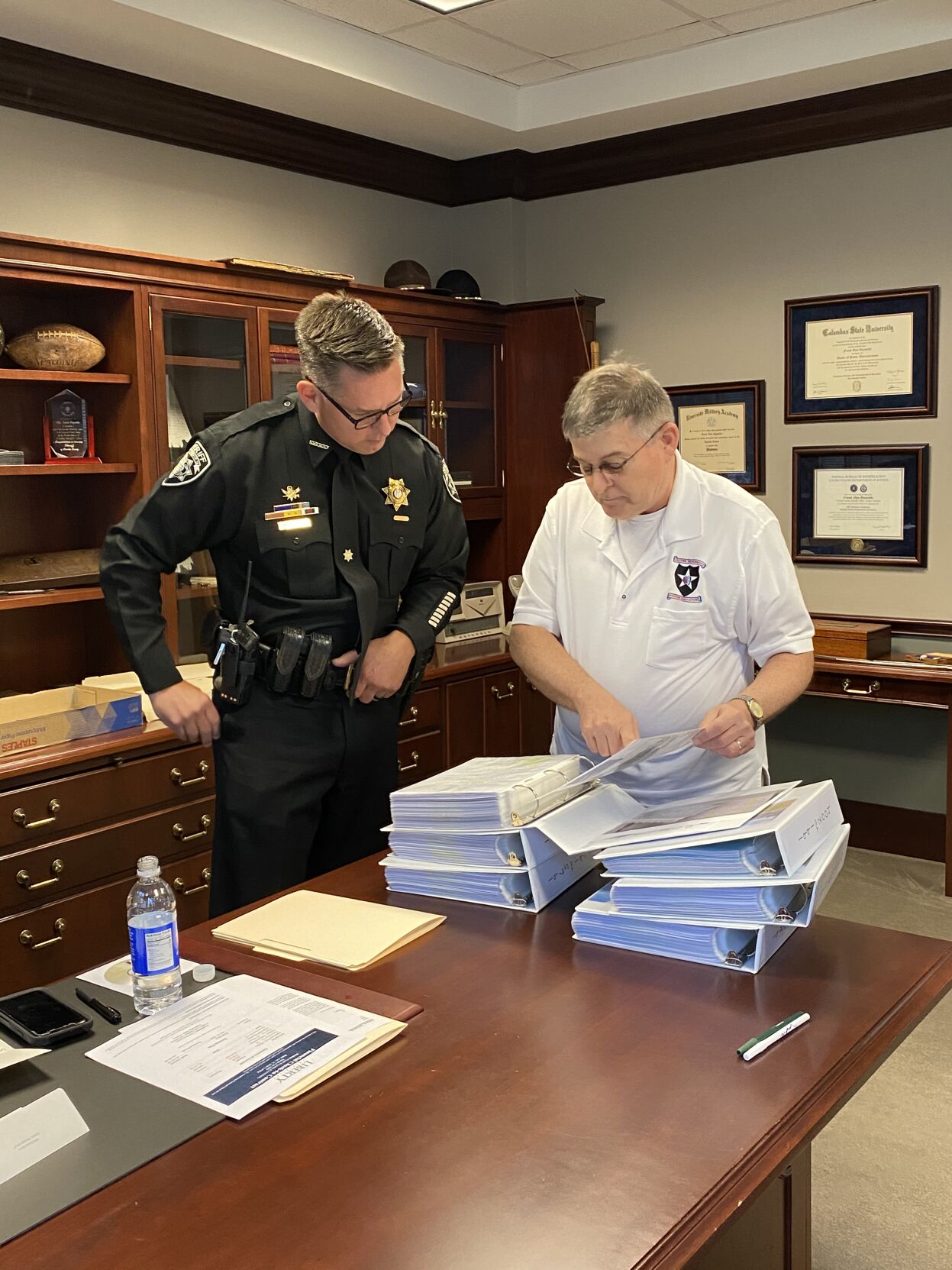 Left: Local historian Michael Hitt, right, shows the six binders full of research and information he had collected on the history of the Cherokee Sheriff’s Office to Sheriff Frank Reynolds. Right: Along with Hitt’s research, the sheriff’s office has unearthed a number of additional historical artifacts, such as jail records from 1964, a sale book from 1962 and other important records relating to the agency. 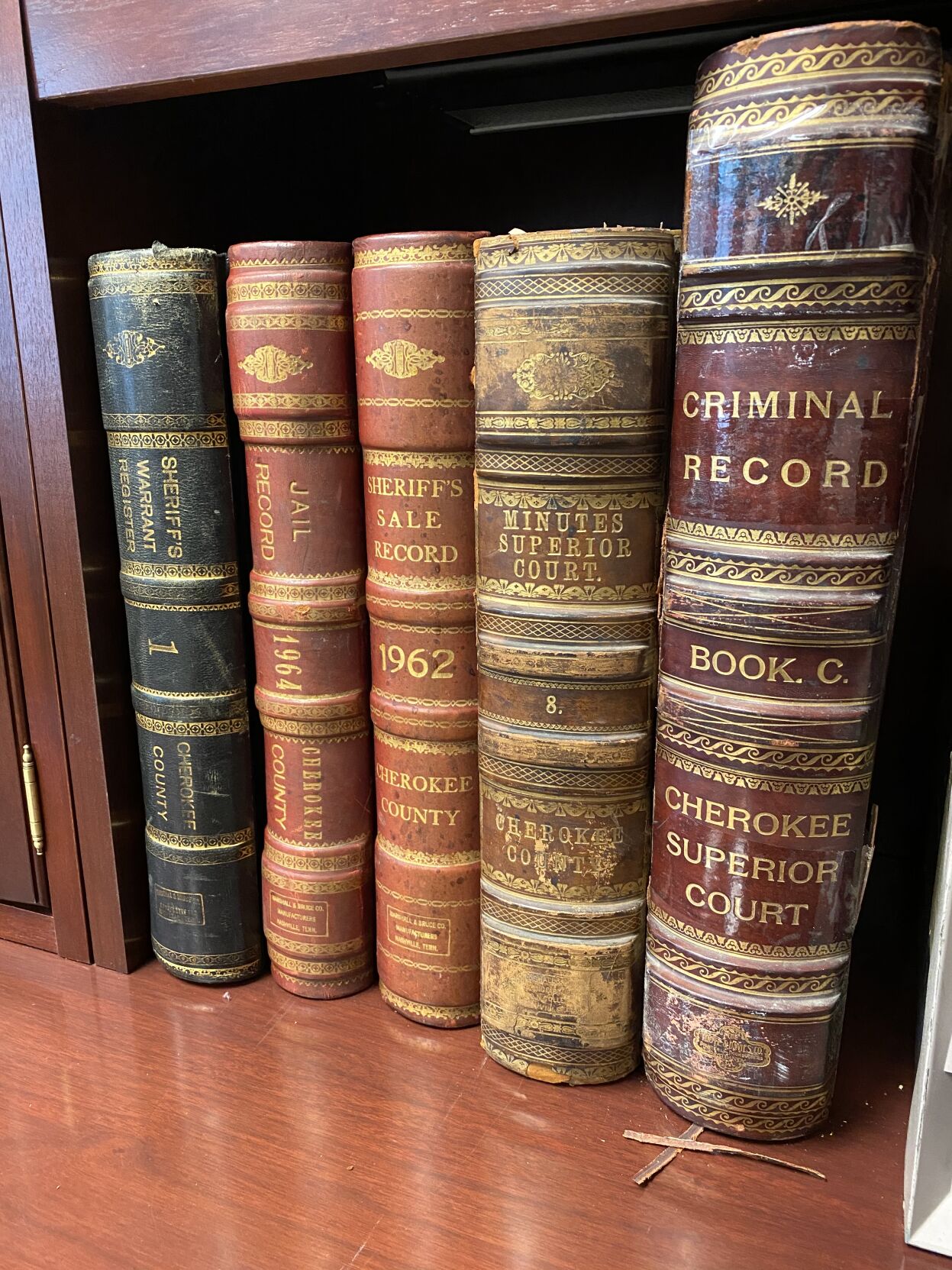 Along with Hitt's research, the sheriff's office has unearthed a number of additional historical artifacts, such as jail records from 1964, a sale book from 1962 and other important records relating to the agency.

Left: Local historian Michael Hitt, right, shows the six binders full of research and information he had collected on the history of the Cherokee Sheriff’s Office to Sheriff Frank Reynolds. Right: Along with Hitt’s research, the sheriff’s office has unearthed a number of additional historical artifacts, such as jail records from 1964, a sale book from 1962 and other important records relating to the agency.

Along with Hitt's research, the sheriff's office has unearthed a number of additional historical artifacts, such as jail records from 1964, a sale book from 1962 and other important records relating to the agency.

During the visit, Hitt walked into Reynolds’ office with six large binders, containing all the information his research had been able to unearth about the sheriff’s office and its history dating all the way back to the official establishment of Cherokee County in 1832. Each binder focused on a specific time period in the agency’s history, with images of that period’s county courthouse on the front of the binders. Inside were newspaper articles, images and other documents relating to the sheriff’s office, ranging from the mundane to major events and incidents the agency was involved in, all carefully indexed.

Reynolds said the idea for engaging in a project like this came about with the initial phases of the expansion and renovation of the county jail, with a handful of historical items being found at that time. In addition, the agency did have a list of all of the man to have served as sheriff of Cherokee County, but not much else. After meeting Hitt in 2018 through events remembering the centennial of the incident where three soldiers were killed at Steele’s Bridge when the bridge collapsed in an act of sabotage during an expedition to round up deserters and draft dodgers, Reynolds and the sheriff’s office knew Hitt was just the man to conduct research into the agency’s history.

“We’re excited for what he has collected for us,” Reynolds said.

During his presentation, Hitt pointed out how, not only does the index in each binder carefully list what each item is, but it also breaks it down and details where the source came from.

“I’ve been working on this since February,” Hitt said.

Some interesting items out of the plethora of information included in the presentation were that the sheriff’s office only conducted three hangings until the state of Georgia ruled such a form of execution could no longer be used. At two different points in the history of the sheriff’s office, Hitt said he found two letters, one from 1880 and one from 1921, that had been published in the newspaper written by county inmates commending the agency for how well they were treated. In fact, Hitt pointed out that the letter from 1921 had been signed by all of the inmates being detained at that time.

“What I found was that the office has always been well-respected,” Hitt said. “I never found letters badmouthing the sheriff’s office in any way.”

Other events Hitt found fascinating and pointed out in the presentation was a story from 1915 announcing the agency had obtained its first vehicle, named Jenny, and how, in 1927, the grand jury had recommended a new courthouse for the county. In that same edition of the newspaper, there was a piece about how the courthouse mysteriously burned down, helping pave the way for the marble courthouse in downtown Canton to be built. In 1921, a court bailiff was killed serving as backup when the sheriff set out to take down a local moonshiner. In the aftermath of this, the newspaper encouraged the public to show support for local law enforcement.

Hitt also found definitive evidence showing when the courthouse destroyed during the Civil War occurred. Based on the information he had gathered, including accounts written by those participating in the event, the Cherokee County Courthouse, along with portions of the city of Canton, was burned by soldiers of the 5th Ohio Infantry Regiment on Nov. 4, 1864, which led to a Presbyterian church in Canton being used as a makeshift courthouse until a new one could be built.

While much of the information was serious in nature, a few items were on the more humorous side. These included how there were incidents when the sheriff’s office would arrest moonshiners and confiscate their vehicles to be sold at auction. One such car was seized and sold at auction at least three separate times, every time being taken as a result of a moonshine-related arrest. After the fire marshal noted that the old courthouse needed a fire escape and one was installed, it wasn’t long before reports of inmates escaping by going out the fire escape began to come in.

Although Hitt shared a great deal of information with Reynolds during their meeting, there were a few items the sheriff had found and wanted to let Hitt take a look at. These artifacts included blueprints of the current jail from 1989, a traffic citation book from 1949, warrants from the 1920s and a copy of the sheriff’s oath of office dating back to 1883, an oath that has changed little, if any, in the nearly 140 years since.

Reynolds said the overall goal is to not only acquire items related to the history of the sheriff’s office and potentially set up some sort of exhibit showcasing these artifacts, but also potentially turn Hitt’s research and other information into a book chronicling the history of the Cherokee Sheriff’s Office.

“We are going to preserve the history of this office. We want to preserve as much as we can,” Reynolds said.

Cherokee County and the city of Waleska are making a final push to encourage residents to complete the 2020 Census as the Sept. 30 deadline ap…

A number of officials from the Cherokee Sheriff’s Office were present at Tuesday night’s Cherokee County Board of Commissioners meeting, as th…

As the county moves forward on developing its newest recreational area, the Cherokee Recreation and Parks Agency Advisory Board is considering…