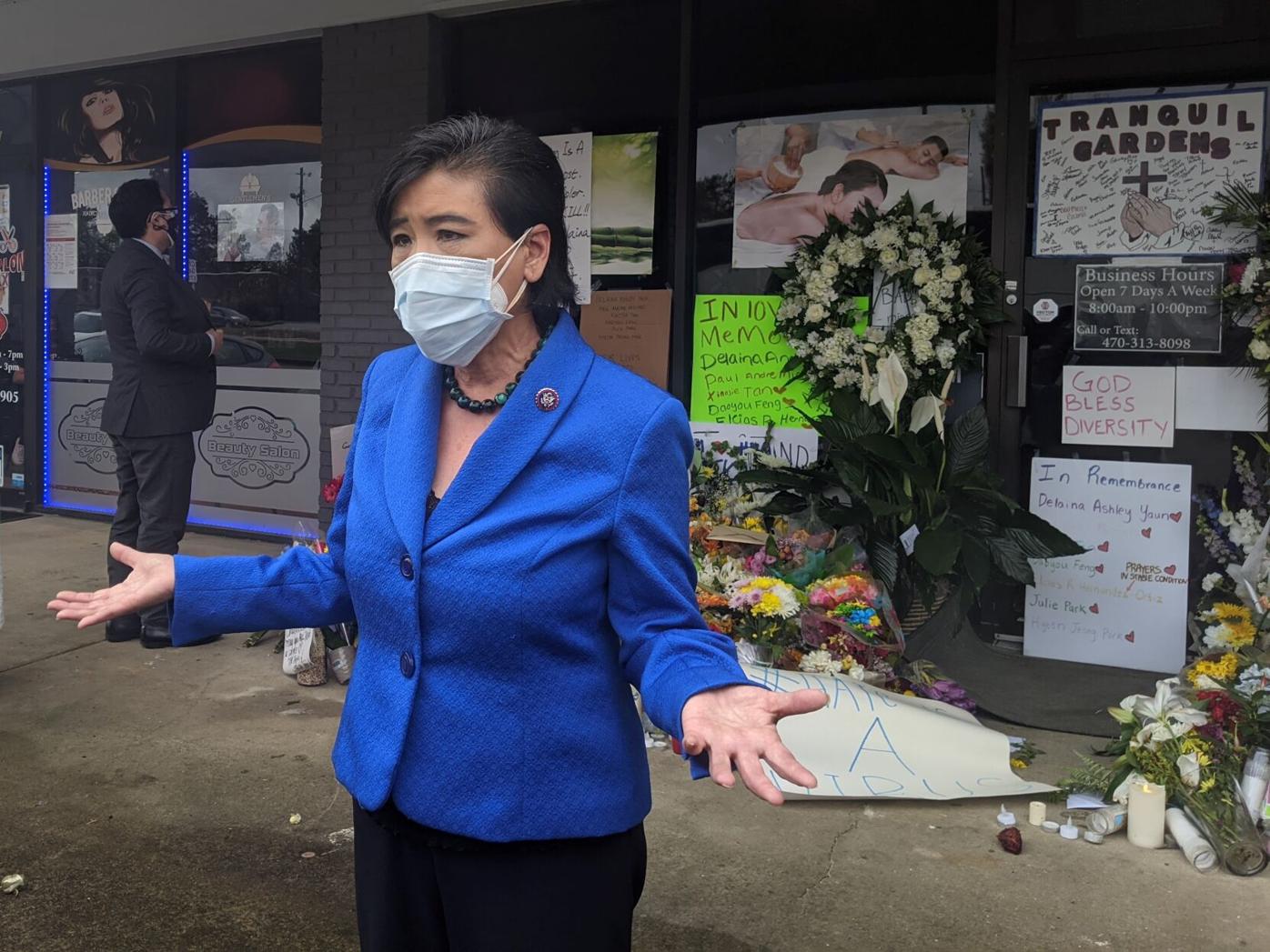 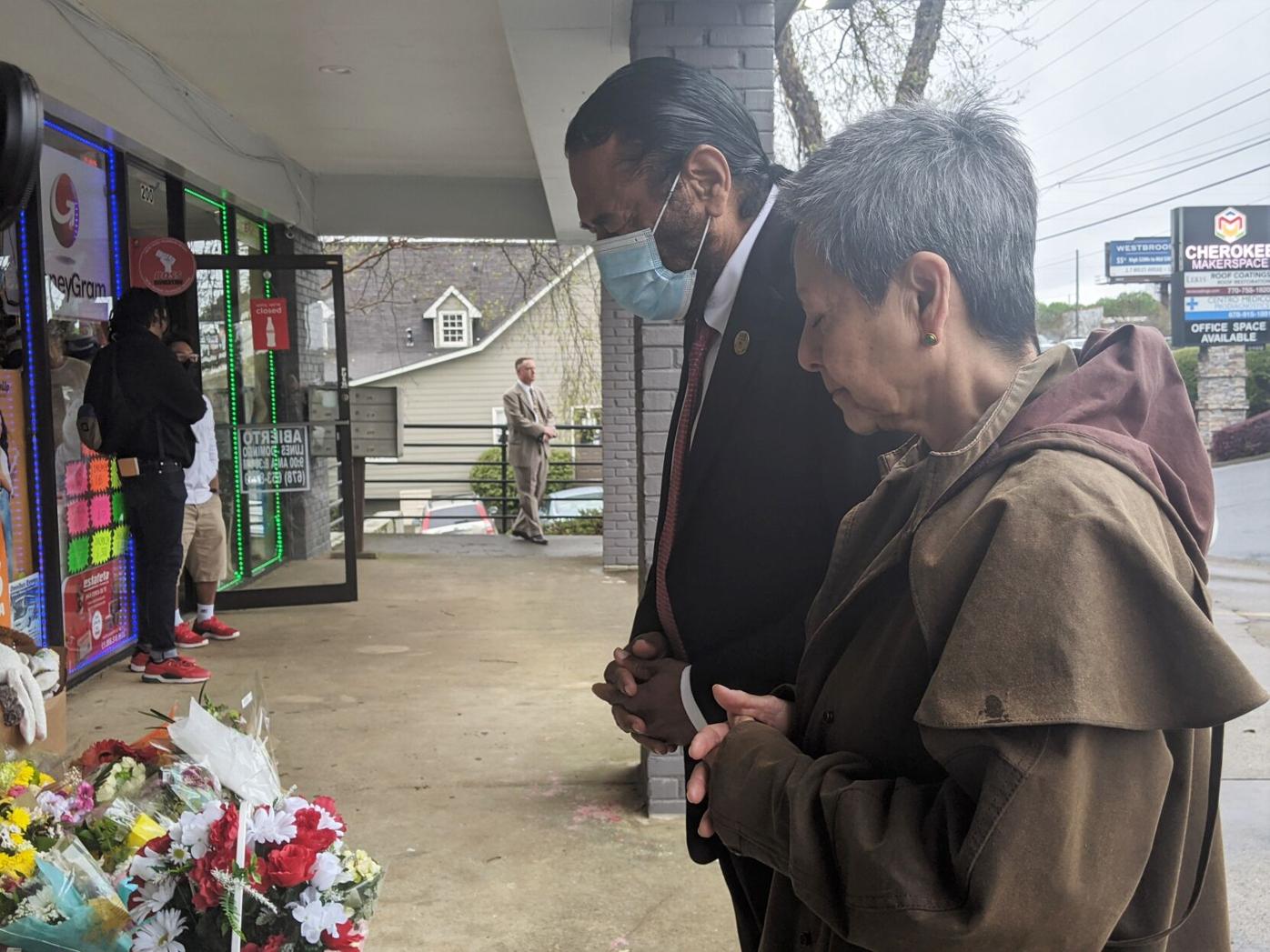 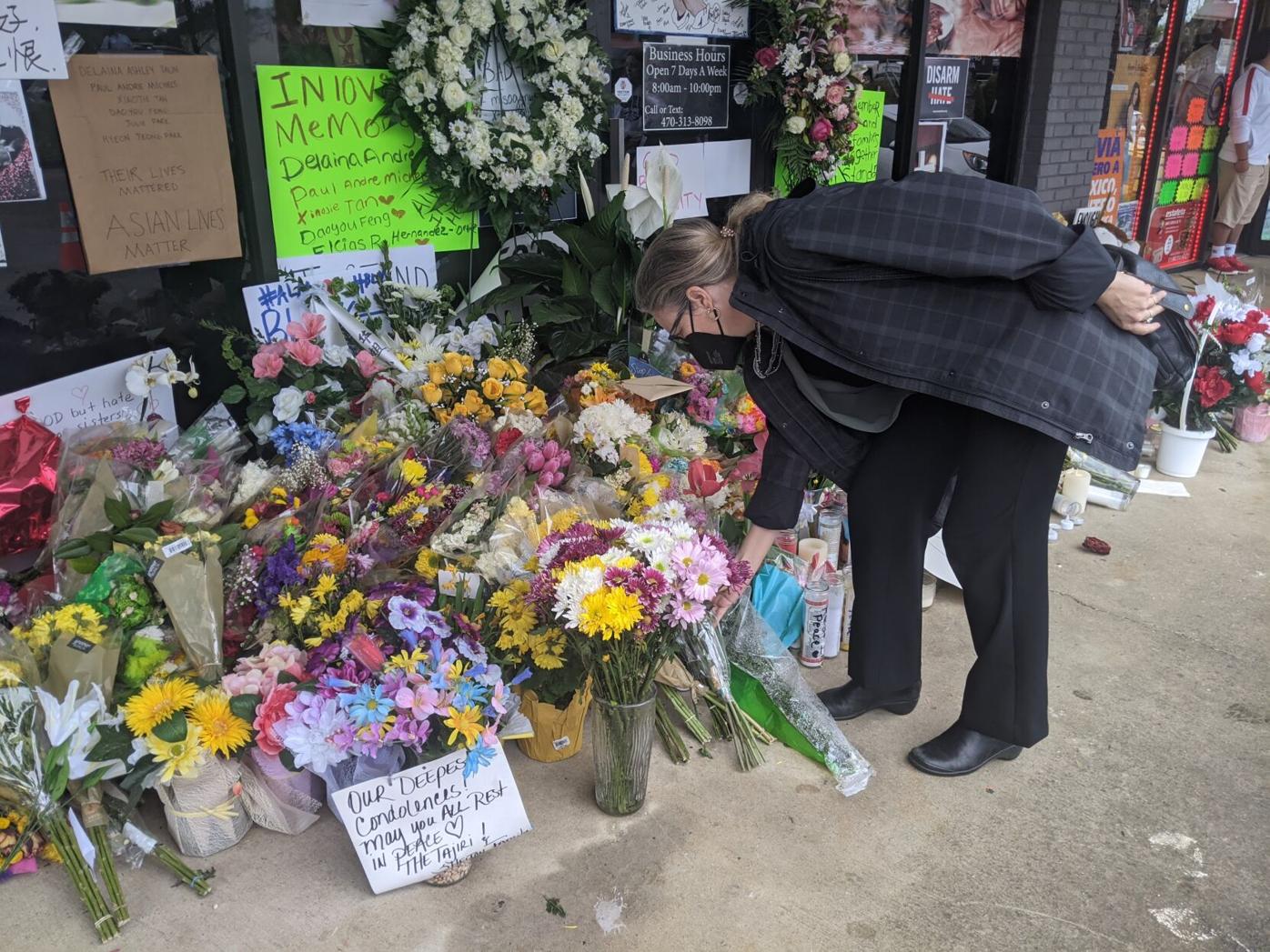 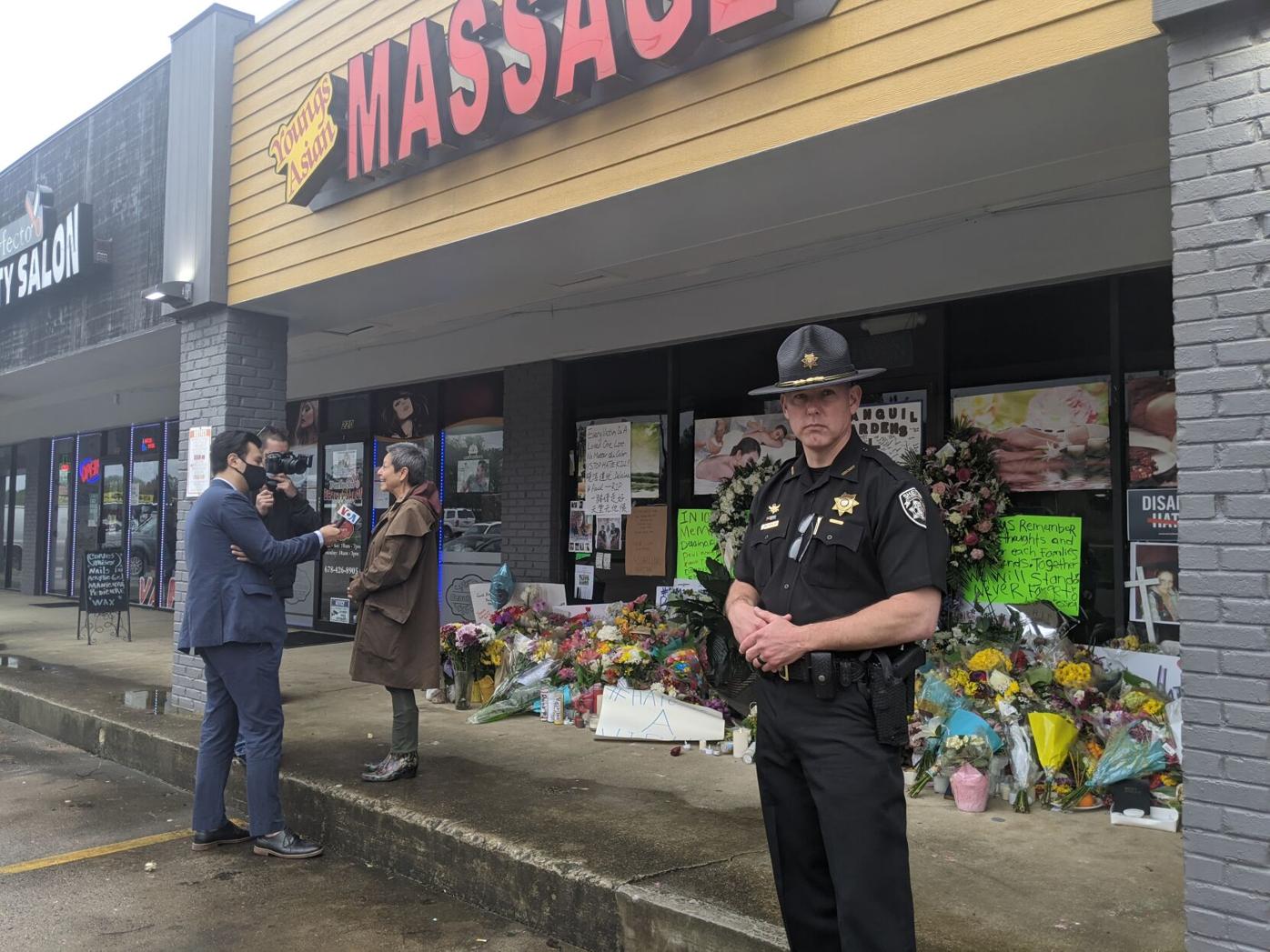 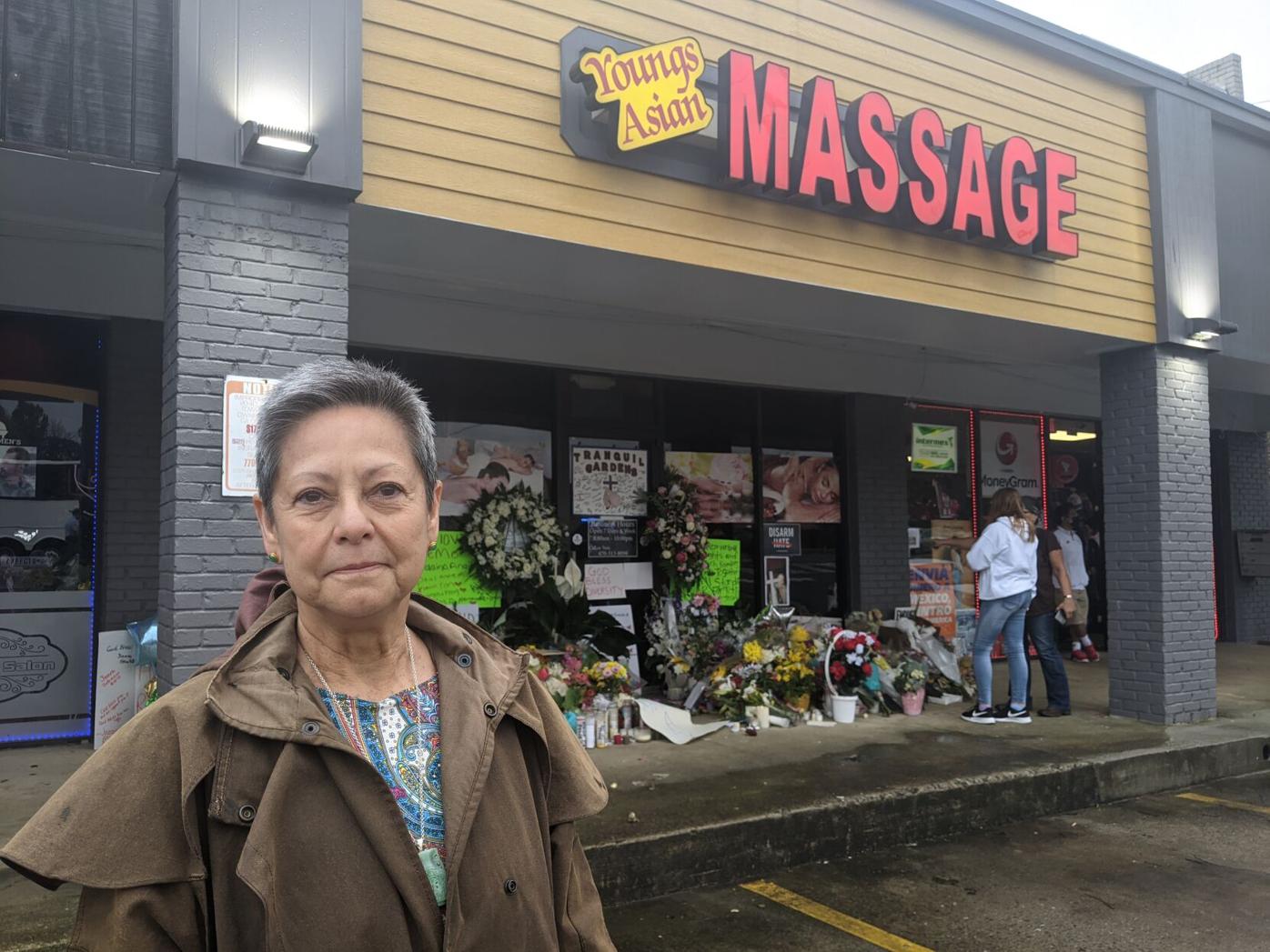 CHEROKEE COUNTY — Members of the Congressional Asian Pacific American Caucus visited Young’s Asian Massage near Acworth Sunday to pay respect to the victims of the shooting there and to denounce violence against Asian Americans.

U.S. Reps. Judy Chu of California, chair of the caucus, Grace Meng of New York, Mark Takano of California, Al Green of Texas, and Nikema Williams and Carolyn Bourdeaux of Georgia — all Democrats — visited the spa near Acworth, and Gold Spa and Aroma Therapy Spa in Atlanta.

Chu told members of the media at Gold’s that it was important to trace the steps of the alleged shooter, Robert Aaron Long, who police say bought a gun hours before starting a killing spree at the three spas March 16, killing eight people. She pointed to the large number of flowers and signs in support of the victims.

“The sentiment is just overwhelming, that so many people feel so strongly that Asian lives matter, that hate is a virus,” she said. “Just look at the signs that are here, the flowers that are here. So many people of all different backgrounds are heartbroken by what happened, and that just shows we all have to come together and unite to speak out against this kind of terrible hate.”

After visiting the Atlanta spas, the Congress members met with victims’ families, and later they and U.S. Rep. Hank Johnson, D-Lithonia, held a roundtable discussion with Asian and Pacific Islander leaders in Duluth.

Williams, who represents Atlanta, said she visited the sites of the shootings to show solidarity. She said Congress needs to look at gun control measures like waiting periods to buy guns, in addition to passing the House-backed background check bills in the Senate.

“Someone sat here in the parking lot for a full hour, and still decided to go inside and massacre four people, and then drive and kill other people,” she said. “It absolutely feels targeted to me. We must make sure we have every available resource with the Department of Justice that this crime is investigated as a hate crime, and that we move forward.”

Byrd, who represents parts of Cherokee County near the site of the first shootings, said the Asian community came together even though it’s made up of many ethnicities and cultures.

“It’s very sad and heart-wrenching to see what has happened in our own backyard here in Cherokee County,” she said. “We never think anything would happen like that. I think that it sends a powerful message, not only to our community but to our state and across the country. It is unfortunate that so many Asians feel threatened, whether real or manufactured, I mean, it’s very sad to think in those kinds of terms.”

Byrd, who is Chinese American, recalled the Chinese Exclusion Act of 1882, which banned Chinese immigration in the U.S. for over half a century, her voice breaking.

“It’s very sad that this has happened, but I think it highlights what may be going on within the Asian community across our country,” she said.

As for the proposed gun control measures, Byrd said a five-day waiting period will not stop a potential shooter.

“Nothing is going to stop people that have hate in their hearts,” she said. “The only way we are going to change that is for Jesus to change our hearts and minds and give us hope for all people, that we are all united as one instead of being separate because of our skin color...I remember for so long and still do, that song ‘Jesus Loves Me,’ red, yellow, black and white,’ that’s all of us.”

Reynolds said authorities have “a very strong case” against Long.

“It’s just an unfortunate tragedy, but hopefully our country can come together and heal,” he said. “Our goal now is to bring justice, justice for the victims and our community.”

The sheriff did not share any new details about the case but said investigators are “checking every possible lead.”

“They’ve worked tirelessly over the past few weeks with the FBI, the City of Atlanta, hundreds, maybe thousands of man hours, to look for evidence, and so far we’re very confident that justice will be done,” he said.

After the shooting spree in Cherokee and Atlanta, Long, 21, was eventually arrested in Crisp County while driving south on Interstate 75, authorities said.

Long faces several charges in Cherokee, including four counts of murder, one count of attempted murder and five counts of possession of a firearm during the commission of a felony. He also faces a slate of charges stemming from the shootings in Atlanta and is being held in Cherokee without bond.

Despite the coronavirus pandemic’s effects on the economy, Cherokee County Regional Airport officials recently said the airport remains a stro…

The man charged with killing eight people at spas in Cherokee County and Atlanta was indicted by grand juries in Cherokee and Fulton County Tuesday.

What’s next in the Cherokee spa shooting case?

The Cherokee County criminal case against the accused gunman in March’s Atlanta spa shootings may be resolved next week, according to Fulton C…

A hearing for alleged Atlanta spa shooter Robert Aaron Long was postponed to Sept. 28, but prosecutors reveled they intend to pursue hate crime charges and confirmed they are seeking the death penalty.