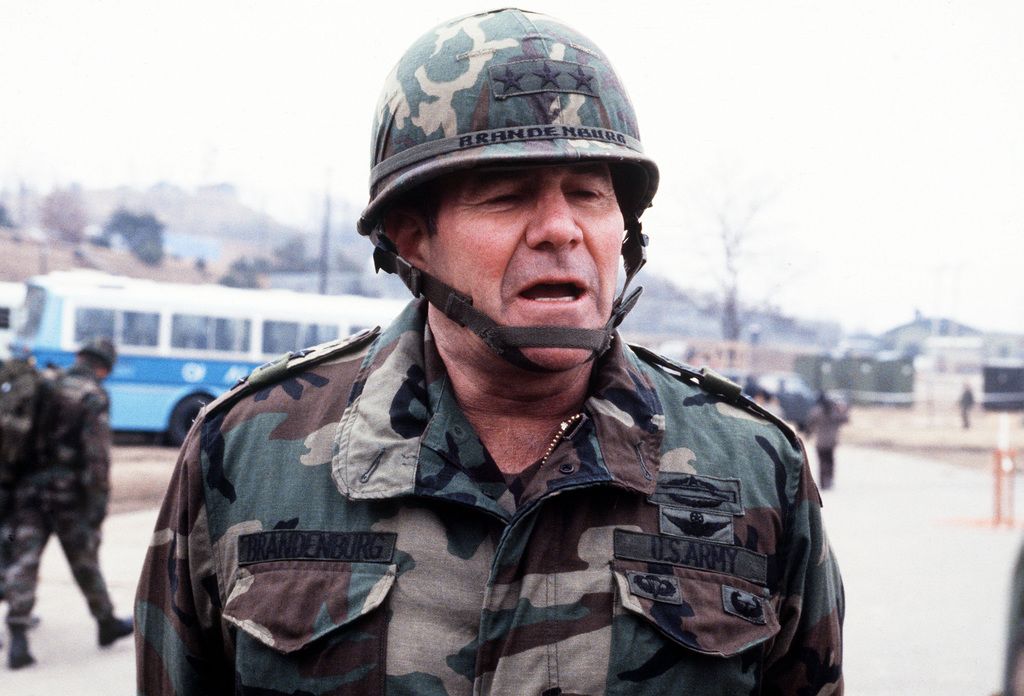 Lt. Gen. John Brandenburg addresses the press after arriving to participate in exercise TEAM SPIRIT ‘84 at Osan Air Base in South Korea. 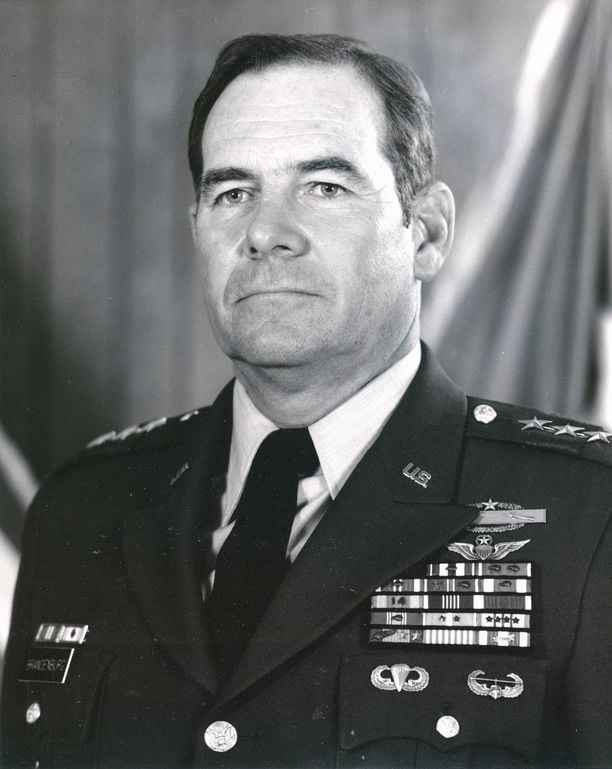 His family will receive visitors from 4-7 p.m. Monday at Darby Funeral Home, 480 E. Main St., Canton. A funeral is set for 10 a.m. Tuesday at the funeral home. Burial at Georgia National Cemetery with full military honors follows at noon.

Past and present commissioners alike took the time to reflect on Brandenburg’s post-Army career in public service, all of whom had many positive things to say about the man Brandenburg was.

“John Brandenburg was a fine and great man,” Board of Commissioners Chairman Harry Johnston said. “After retiring from an illustrious U.S. Army career capped as a three-star general, he undertook to lead Cherokee County through a period of great transition. He was elected in 1990 to serve as the first Chairman of our current five-member Board of Commissioners. In that role, he set a tone and standard of excellence for all of us who have followed him for the last 30 years. He and his board were the first to seriously deal with the rapid growth that had begun then in our county and continues today. Under his leadership, land use planning as we know it today began, as did plans to add infrastructure and services to serve the rapid growth. He will always be remembered with admiration and respect.”

Attorney Gil Howard, who served with Brandenburg on the board of commissioners in the early 1990s, said Brandenburg was an extraordinary individual.

“I hate to use a cliché, but he was truly a gentleman and a scholar,” Howard said. “He was amazingly intelligent.”

After retiring from the military, Brandenburg felt a calling to serve his community, according to Howard. Brandenburg acted on his calling with passion, serving for four years on the Cherokee County Board of Commissioners as chairman, taking office as the county shifted away from a single commissioner. One thing Howard said he always admired about Brandenburg was how, after the votes were taken on any matter coming before the board, he was willing to be a great team player and join with the consensus if the vote had not gone his way. Although they may have had honest differences of opinion with regards to a number of issues, Howard said Brandenburg was always very gracious no matter which side of the vote he may have found himself on, rather than being the person who just “picked up the football and went home” after not getting his way.

“He always jumped right in and said, ‘let’s make it happen,’” Howard said. “Once we made a decision, there was a united team effort. It meant a lot to get to work with him.”

Another thing Howard said he always found admirable about Brandenburg while the two served together on the board of commissioners was that Brandenburg’s mother, Mabel, was regularly in the audience at commission meetings. When she was there, he was always patient and attentive with her. Mabel Brandenburg died in 2003 at the age of 104.

In the years that followed their terms on the board of commissioners, Howard said he would run into Brandenburg on occasion, and the two would spend time catching up some. Howard described these instances as always being a pleasure.

“He was quite a man,” Howard said. “Without a doubt, I am glad to have known him.”

During his Army service, Brandenburg was commander of the renowned 101st Airborne Division, based at Fort Campbell, Kentucky from 1978 to 1980.

Dr. C.R. Hill will officiate Brandenburg’s funeral. In lieu of flowers, Brandenburg’s family is requesting donations be made to Wounded Warriors or to Canton First United Methodist Church in his memory.