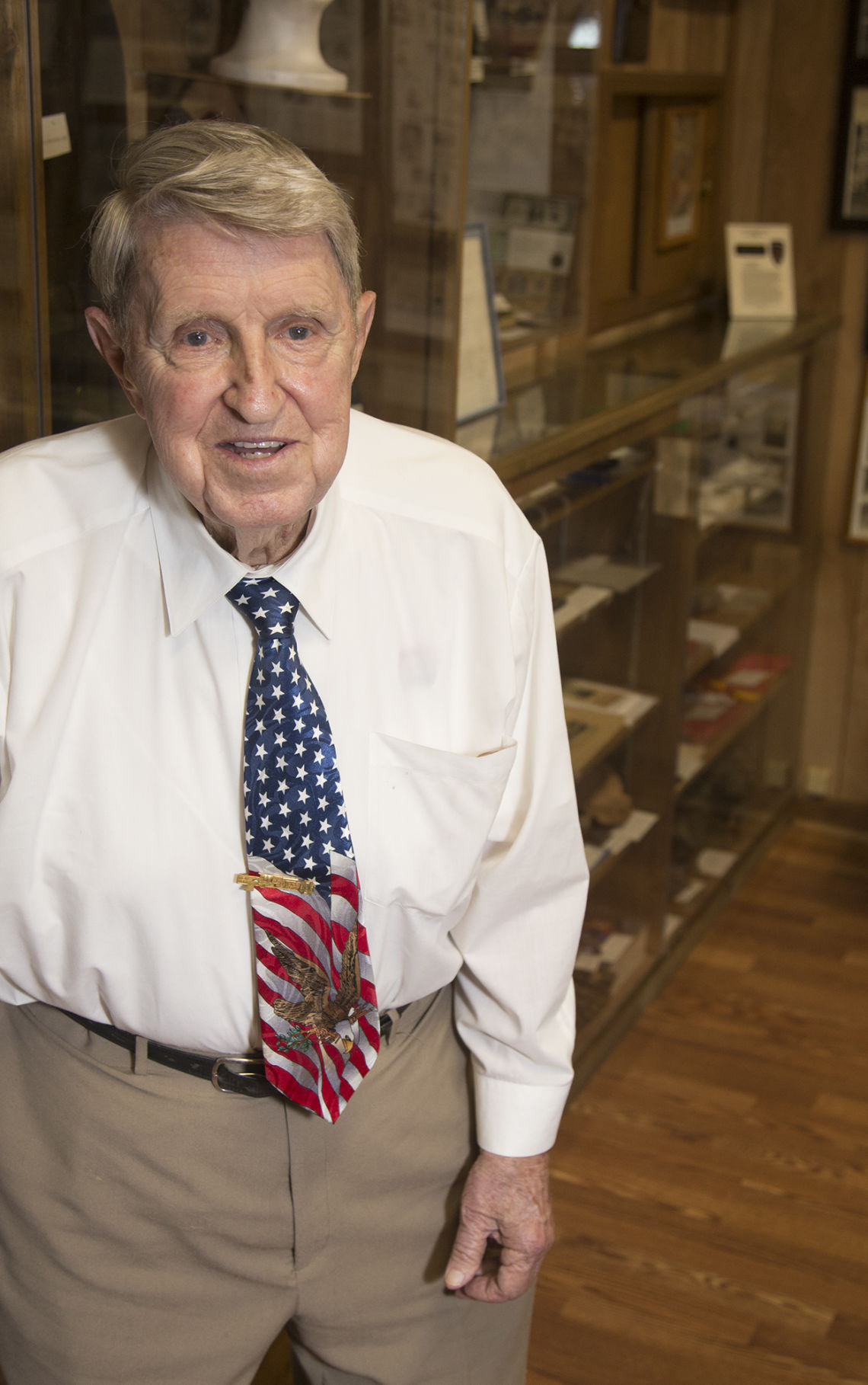 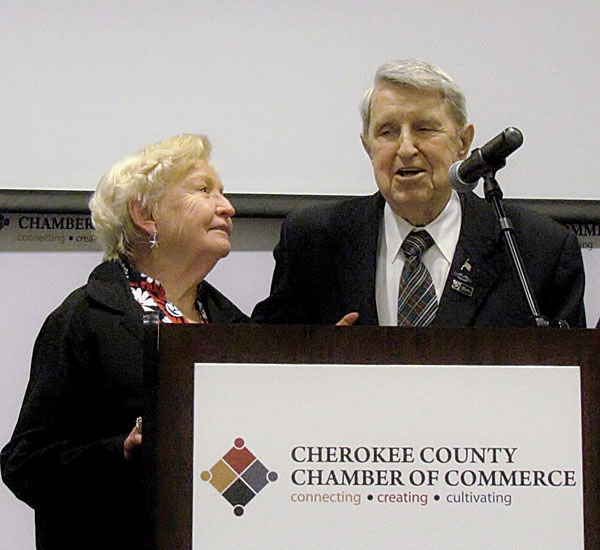 File — As his wife, a woman he described as the love of his life, gazes at him, Cherokee County First Citizen Norman Sosebee reflects on his past during the Cherokee County Chamber of Commerce annual meeting in January 2016.

File — As his wife, a woman he described as the love of his life, gazes at him, Cherokee County First Citizen Norman Sosebee reflects on his past during the Cherokee County Chamber of Commerce annual meeting in January 2016.

Born in Cornelia, Sosebee moved to Canton in 1940 at the age of 14 when his father opened Sosebee Funeral Home. Following his graduation from Canton High School in 1944, Sosebee served in the U.S. Army, seeing action in Europe during the final year of World War II. For nearly 40 years, Sosebee owned and operated Sosebee Funeral Home, which he purchased from his father in 1972, while also serving 28 years as Cherokee County Coroner. Sosebee operated the county’s emergency ambulance service for a time as well.

In addition to his tenure as county coroner and funeral director, Sosebee served as secretary of the Cherokee County Airport Authority for more than three decades, as well as a deacon and Sunday School teacher while a member of First Baptist Church of Canton, before becoming a member of Heritage Fellowship Church. Sosebee was a founding member of the Cherokee County Historical Society, a member and past president of the 75th Infantry Division Veterans Association, a member of the American Legion Thomas M. Brady Post 45 in Canton. For his service and dedication to the community, Sosebee was awarded both the Lamar Haley Award for Community Service and the prestigious honor of First Citizen of Cherokee County.

“I do not deserve this, but I do appreciate it. People I go to church with, socialize with, my children... they have all put their pieces into my life, but the person who made me what I am today is this little lady, my wife of 68 years, Frances,” Sosebee said during the First Citizen of Cherokee County award ceremony in January of 2016.

“Norman Sosebee was a beloved member of Heritage Fellowship and we are deeply grateful to God for the joyful and exuberant way that he embraced life and loved his church,” Heritage Fellowship Church Senior Pastor Dr. Rob Nash said. “He was a true hero to all of us having served his country in World War II and then returned home where he and his wife, Frances, and their family contributed to the Canton and Cherokee County communities. Norman had a passion for life that he shared with everyone whom he met. We will miss him so very much.”

A private service for Sosebee will be held at Georgia National Cemetery, with arrangements handled by Sosebee Funeral Home. In lieu of flowers, those wishing to honor Sosebee’s memory are encouraged to donate to Heritage Fellowship, 3615 Reinhardt College Parkway, Canton or a charity of their choice.

Arrest made in fatal interstate crash that happened in August

At its most recent meeting, the Cherokee Recreation and Parks Agency Advisory Board approved a policy regarding fees for vendors and independe…

Board of Elections rejects challenge to eligibility of 16,000 Cherokee voters

CANTON — A challenge to the eligibility of about 16,000 local voters was unanimously rejected Monday morning in a special meeting of Cherokee …

At the most recent Cherokee County Board of Commissioners meeting, the board held a public hearing regarding the potential modification of zon…