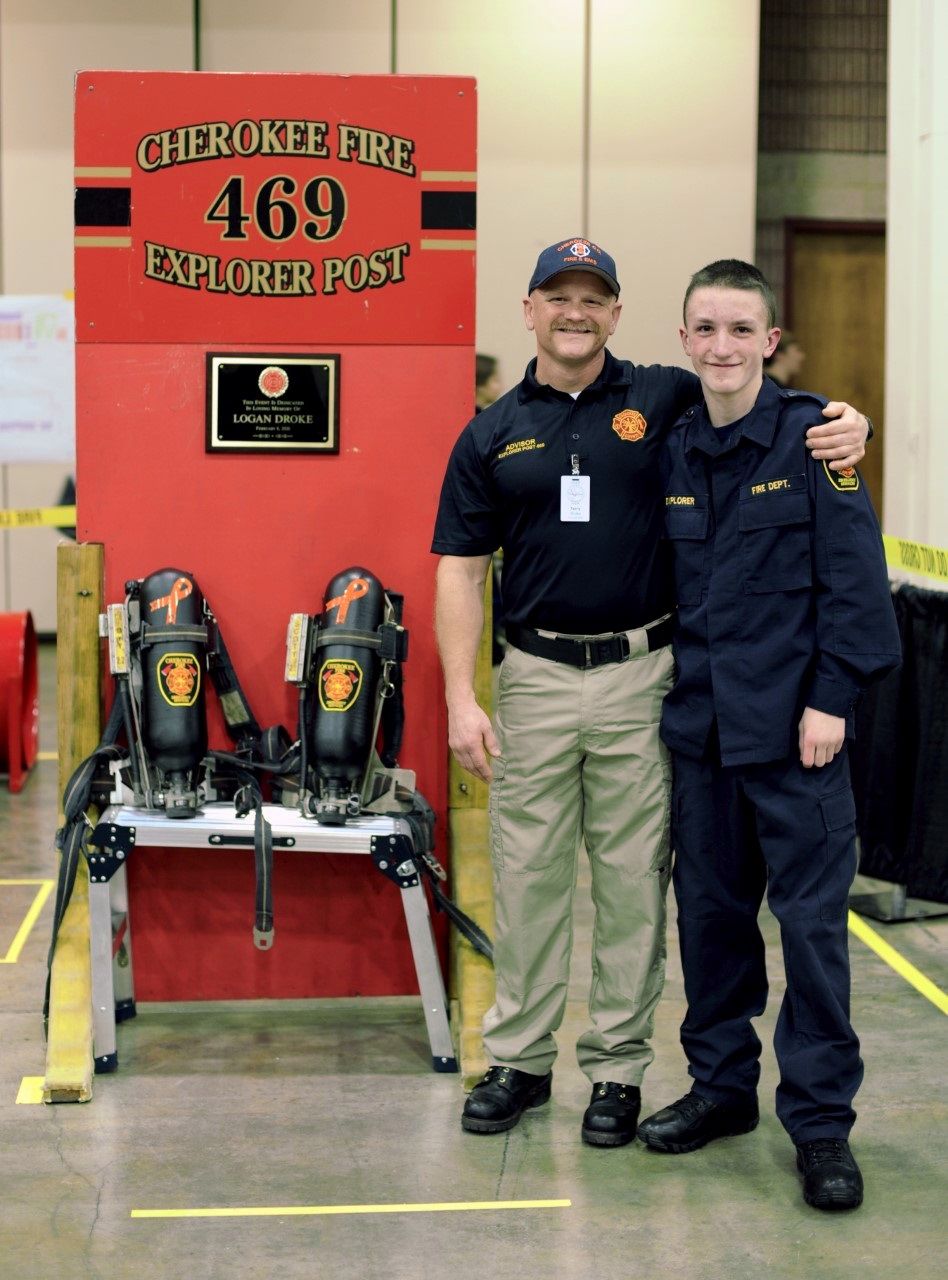 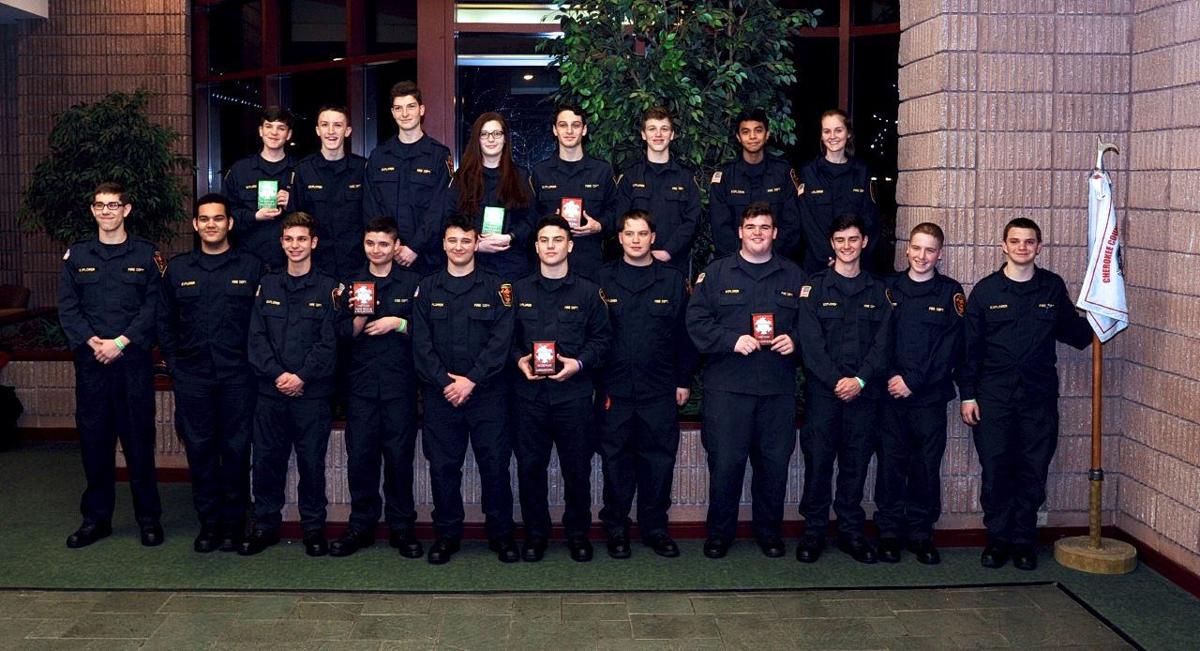 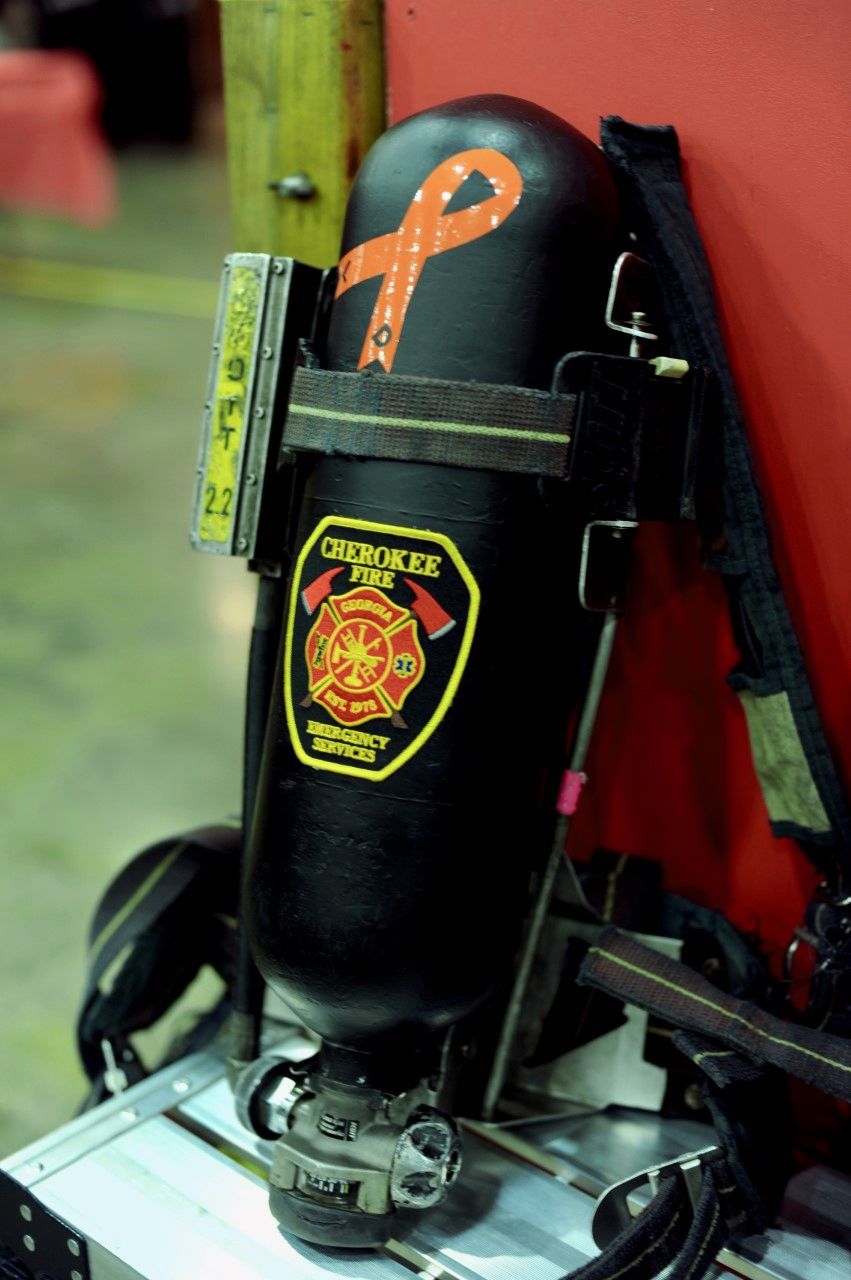 During the Winterfest competition, Cherokee County Fire Explorers paid tribute to former explorer Logan Droke by placing the decal of a ribbon with Droke's initials on it on their air packs. 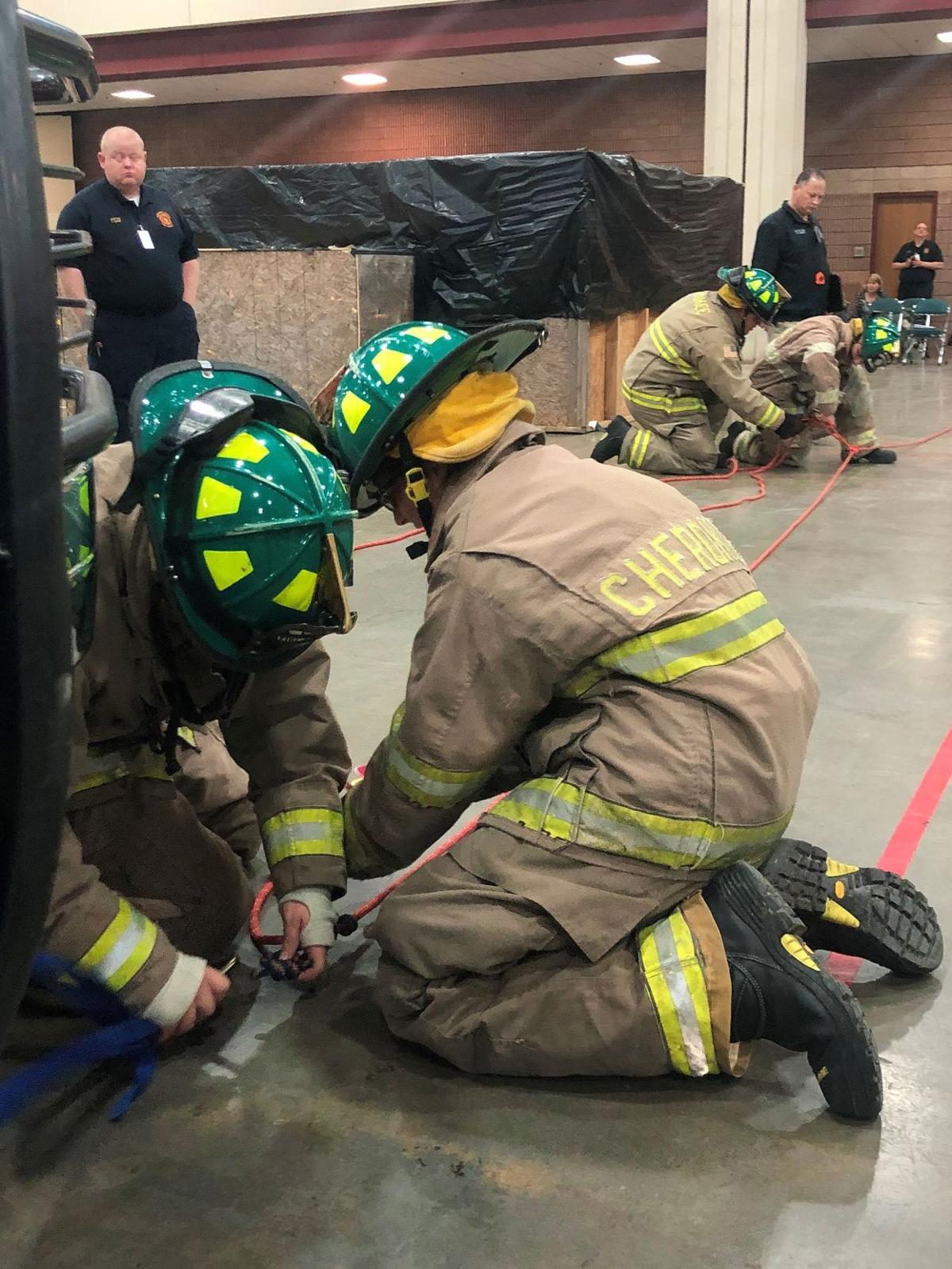 Cherokee County Fire Explorers who attended Winterfest competed in a number of difficult events, such as the Zig Drag, against fire explorers from across the country, bringing back six top-three finishes. 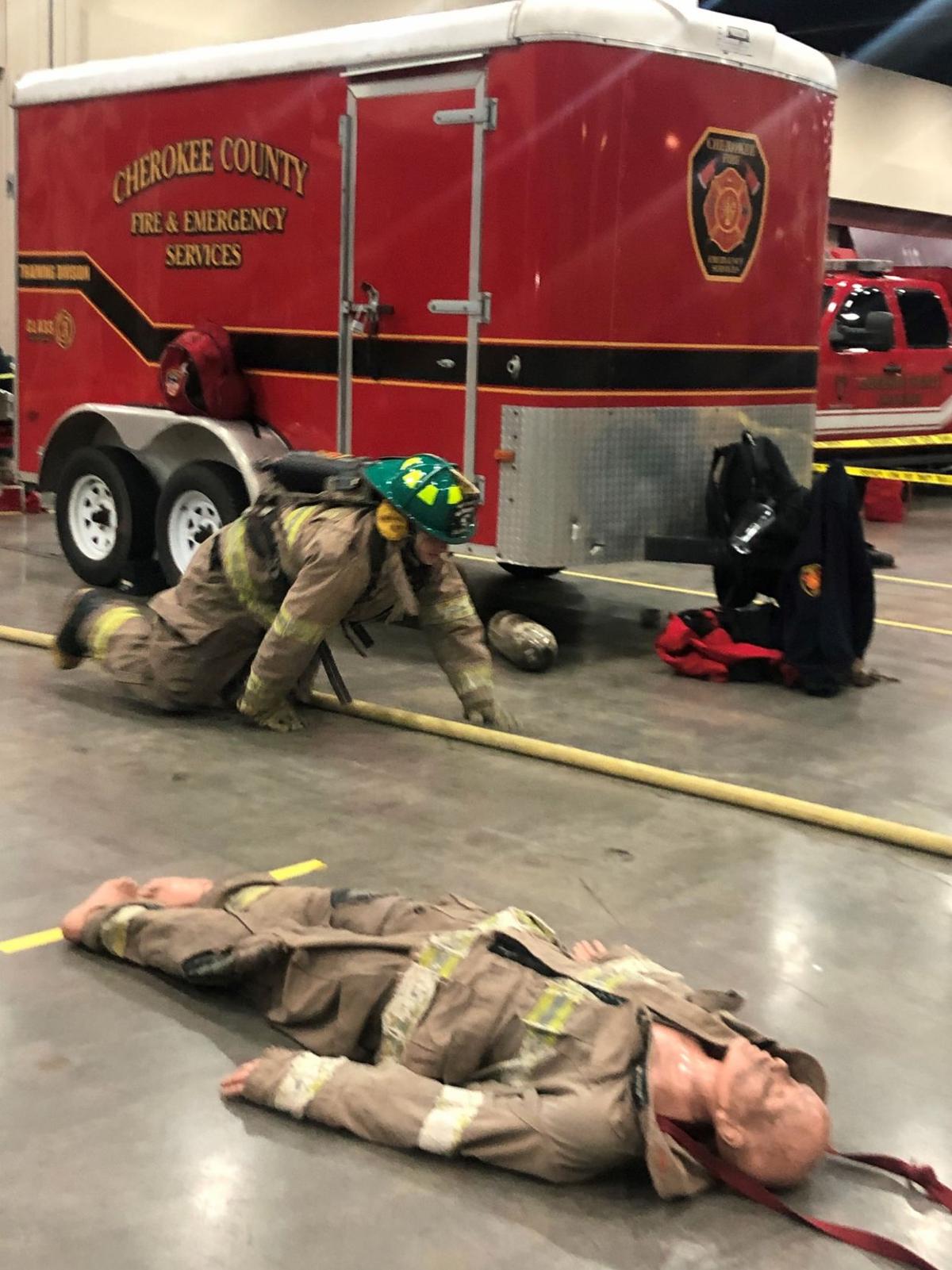 During the Winterfest competition, Cherokee County Fire Explorers paid tribute to former explorer Logan Droke by placing the decal of a ribbon with Droke's initials on it on their air packs.

Cherokee County Fire Explorers who attended Winterfest competed in a number of difficult events, such as the Zig Drag, against fire explorers from across the country, bringing back six top-three finishes.

This year’s Winterfest was held at the Gatlinburg Convention Center last Friday and Saturday, with more than 3,000 Explorers and Venturers from across the country attending the event. Winterfest is the largest scout assembly that specifically targets co-ed youth ages 14 to 21 and allows them to participate in a variety of competitive and social activities throughout the weekend.

During the competition, the members of Post 469 went up against some tough competition to bring home six top-three finishes. The unit placed first in Rapid Rescue and Resuscitate and Vent, as well as Enter and Search. Second place trophies were earned in The Cherokee Drill and Table Top Display, while the unit took third place in the Denver Drill and Table Top Display.

One of these competitive events, The Cherokee Drill, was an event Explorer Post 469 hosted, and was dedicated to Logan Droke in a ceremony that took place on Saturday morning. Droke, a member of the post, died June 23 from cancer. His father, Randall Droke, is both a Cherokee County firefighter and an adviser to the explorer post, while Logan’s brother, Merrick Lindell, is currently an explorer in the post. The unit also memorialized Logan over the weekend by wearing decals on their air packs that featured a ribbon and Logan’s initials.

This was the 19th year that explorers from Post 469 have attended Winterfest, bringing 20 youth and 15 advisors to the event. Some of the attendees from the fire department included Cherokee County Fire Chief Tim Prather, Assistant Fire Chief Eddie Robinson, Operations Chief Shane West and Retired Fire Chief Bob Nealy. Many friends and family members of Post 469 were also in attendance.

Explorers who attended Winterfest began training for the event in the fall of 2019, averaging 7-10 hours of training per week while being mentored by career and volunteer firefighters serving as advisors and associate advisors.

“We have a great group of young people who have worked hard for this year’s competition,” Prather said in a news release. “Many of our current firefighters in Cherokee County were once members of our explorer program.”

The explorer program is a career-based learning opportunity and is open to young men and women aged 14 (and completed the eighth grade) and not yet 21 years old with an interest in learning more about career in the field of fire and emergency services.

Fire and emergency services exploring is a hands-on program that exposes participants to many career experiences, leadership opportunities and community service activities. The primary goals of the program are to help young adults choose a career path within fire and emergency services and to challenge them to become responsible citizens of their communities and country. For more information about Explorer Post 469, contact Lt. Michael Sims at 678-644-1377 or mrsims@cherokeega.com.