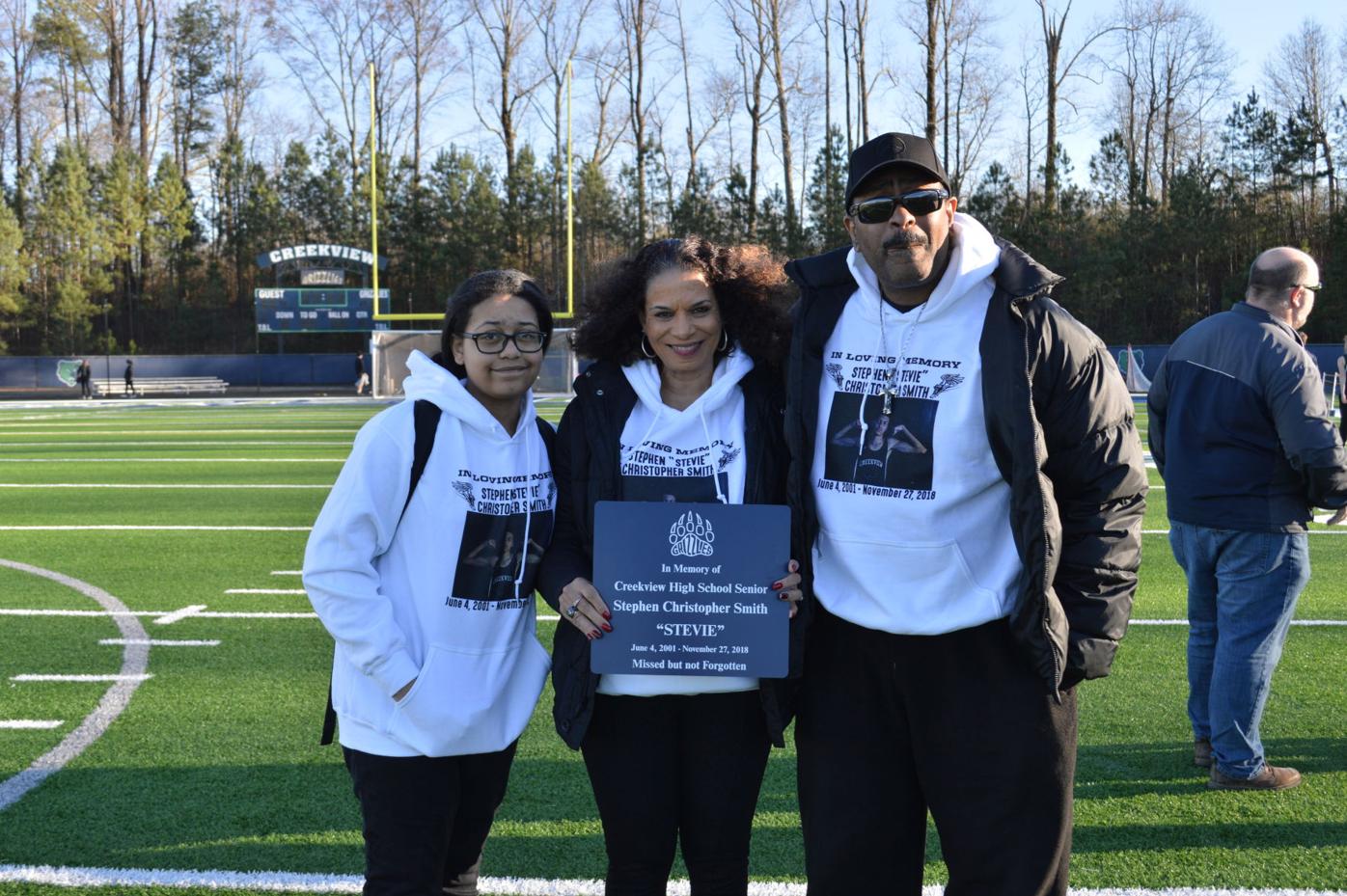 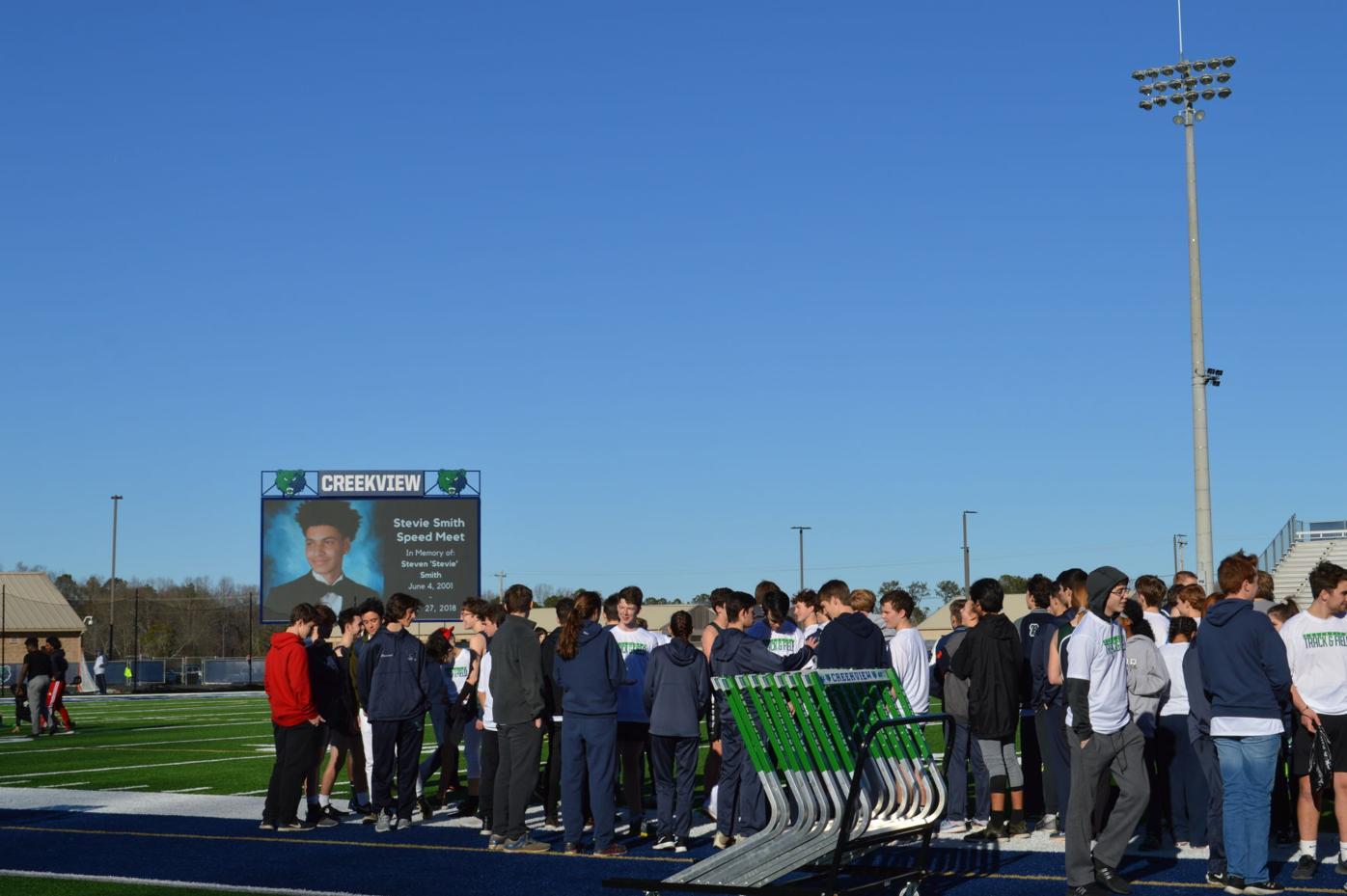 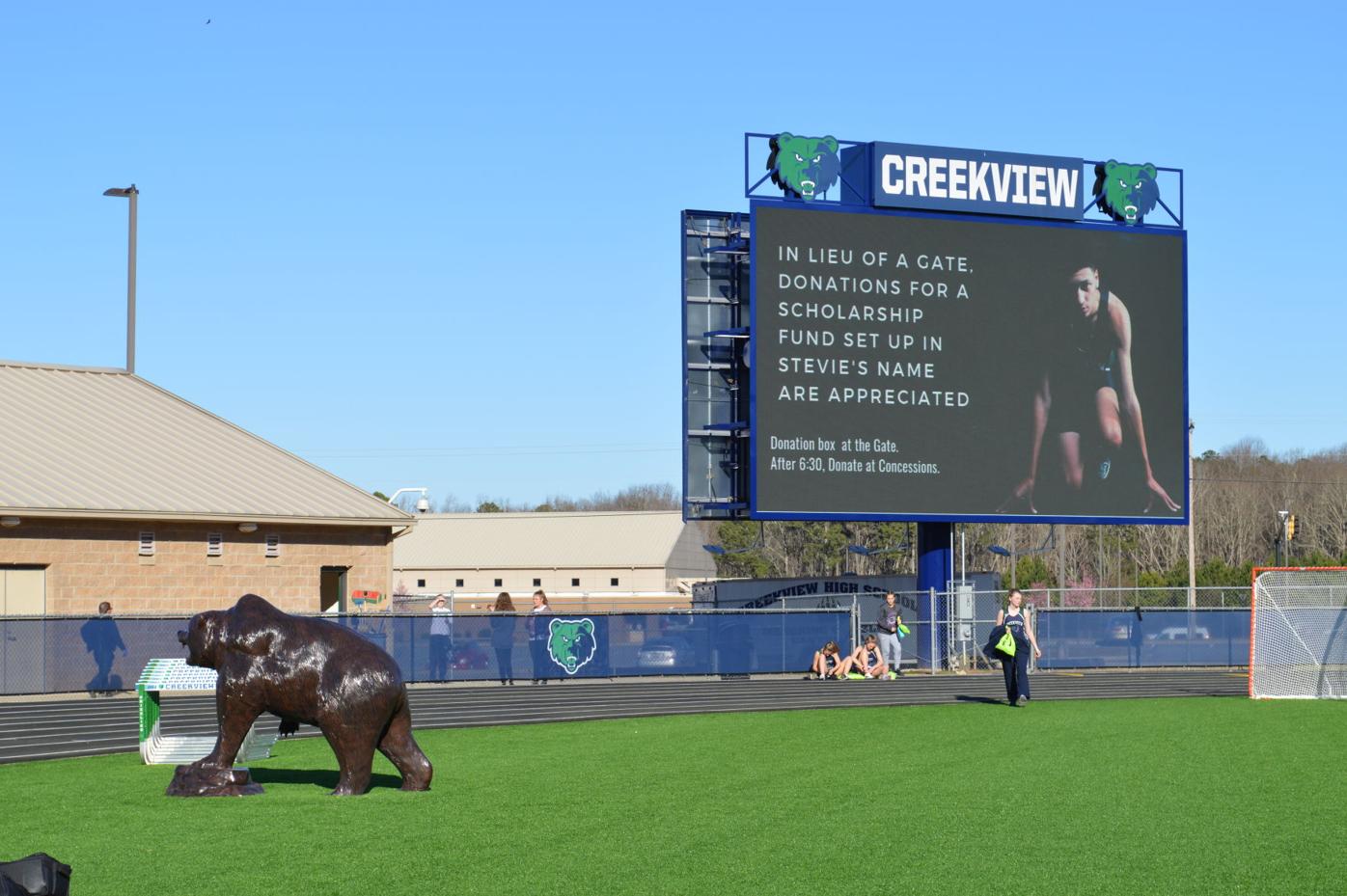 In lieu of a gate fee, they accepted donations for the Stevie Smith Scholarship Fund. 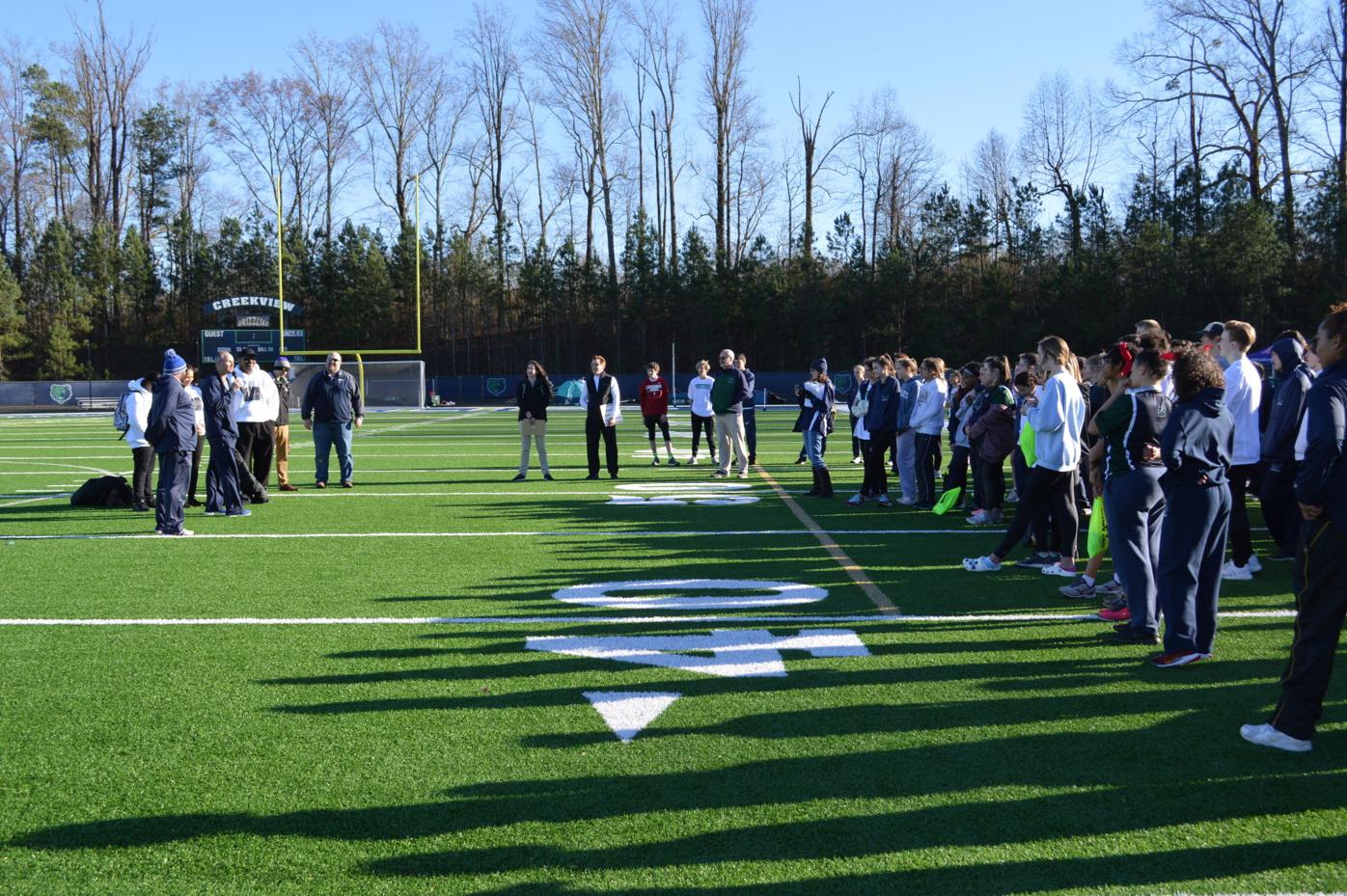 The students gather to hear from Stevie's father, Stephen. 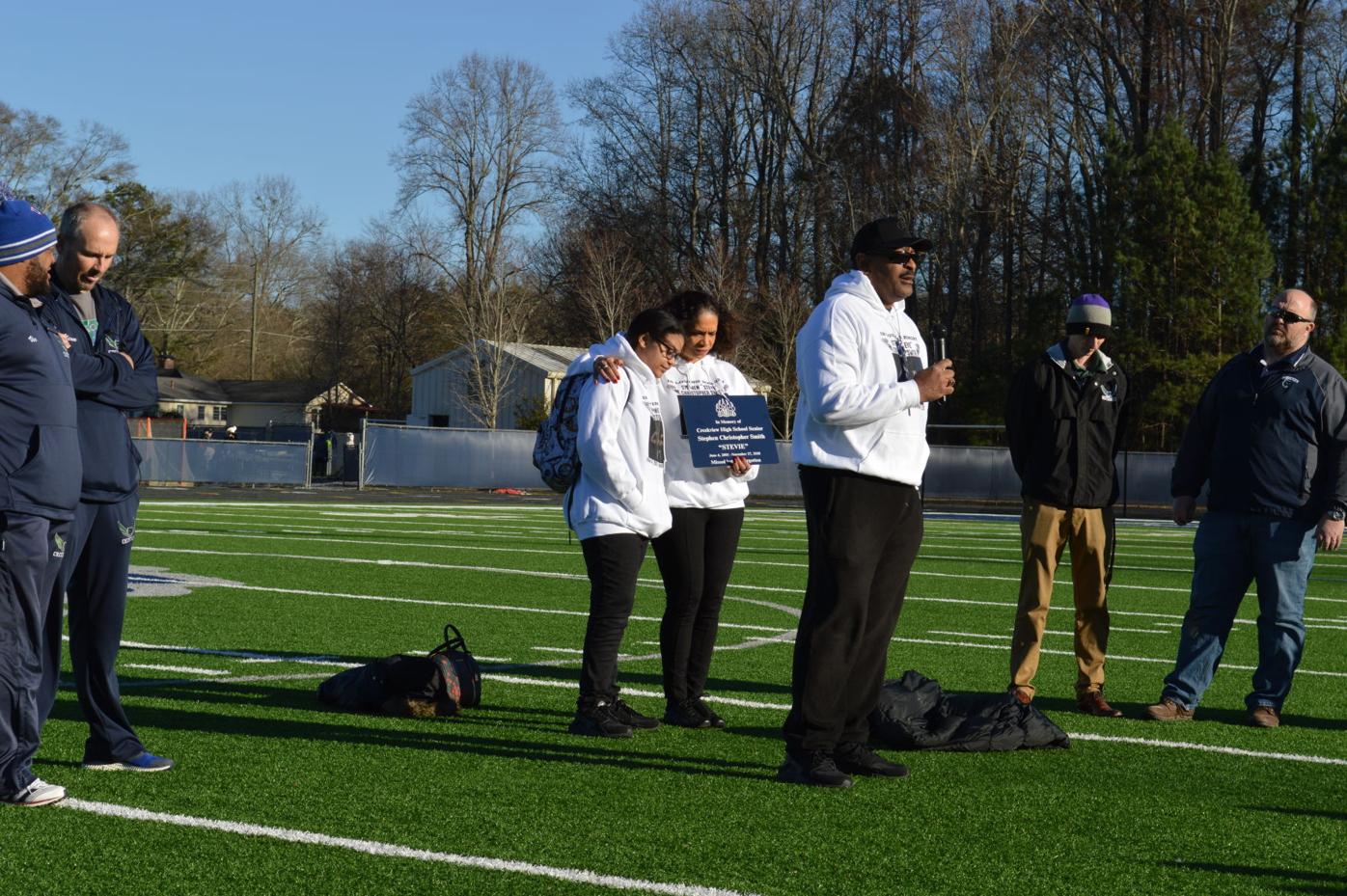 In lieu of a gate fee, they accepted donations for the Stevie Smith Scholarship Fund.

The students gather to hear from Stevie's father, Stephen.

The Creekview High School community came out to Wednesday’s track meet against rival Cherokee High School to honor the life of student, Stephen “Stevie” Smith, who was killed in a one-car crash on Nov. 27.

Three other students were injured when the car left the road and struck a tree. The driver, Yann “Fred” Engamba, who was also a track team member has been charged with first-degree vehicular homicide, serious injury by vehicle, reckless driving and failure to maintain lane.

Stevie Smith is remembered by his friends, family, teachers and community as respectable, a friend to all, hardworking, honorable and a track star. His passion for track and field led Coach Glenn Braselton to put together the inaugural Stevie Smith Speed Meet, which he intends to make an annual event. In lieu of a gate fee, donations were taken to contribute to the scholarship fund Stevie’s father, Stephen Smith, has started. Coach Vijande Burr described this event as the kick-off for the team’s regular season.

“We wanted to dedicate this meet to one of our fallen soldiers, Stevie Smith. This is our 1st annual and this is going to be a tradition,” Burr said.

The meet started with both teams warming up, running the track and setting up necessary equipment. Braselton called the Creekview track and field team to the 50-yard-line while he led Stephen’s mother, Barbara Smith, younger sister, Natalie Smith, and father, Stephen Smith onto the field. Student’s stopped the family to tearfully welcome them to the meet.

The crowd grew quiet. Many students held hands, bowed their heads or stood in solidarity while Braselton spoke to Stevie’s family members who were able to attend, missing were sisters Stephanie and Kayla.

Braselton said, “For once, I am at a loss for words. I have been thinking for weeks of what to say but nothing good comes up. I can tell you that being out here on this track and not seeing Stevie is obviously different. He stood above everyone, we could see him from a distance, he was always a joy to be out here. We certainly miss him.”

Braselton then presented Stevie’s present family with a memorial that will hang in the locker room in honor of the fallen teammate. He then gave the family a class ring on behalf of Creekview High School and principal Mark Merges. Braselton handed the microphone to Stevie’s father, Stephen Smith, to say a few words about the donations made to the Stevie Smith scholarship fund.

“From that fateful day, that’s burned in all of our memories, I started thinking about what could be done to find a positive way to ensure Stevie’s name lived on and served a positive purpose for others,” Stephen Smith said. “One of those things is a scholarship in his name, a student athlete scholarship. Not just for someone who is strong academically and not just for someone who is strong athletically. Stevie excelled in academics, he was accepted to KSU, recruited by the University of Kentucky, Louisiana state university and other schools. It breaks are hearts he won’t be here to do that.”

Smith went on to praise his late son for the person, athlete and student he was. He explained that he and his wife have been touched by the outpouring of kind words students, teachers and community members have passed on to them regarding their son.

“We did our best to raise him to be a good person. But from what you tell us, he far exceeded what we taught him. We are looking to award the scholarship to someone like Stevie, to serve as an inspiration as something to reach for,” Stephen Smith said.

Smith added that they are looking into doing something regarding safe driving in the community. He expressed his concerns for young people on the roads and how some don’t take the responsibility seriously.

“I’m looking to find some way to offer grants, discounts and possibly pay for safe driver training for some students. Being behind the wheel of a 3 - 4,000 pound projectile can turn into an unimaginable situation in a split second. It’s not to be taken lightly,” he said.

With Stevie Smith as their motivation, both Creekview High School girls’ and boys’ teams pulled out a win over Cherokee High School. There were 15 events scored with the girls’ team receiving 92 points and the Cherokee girls receiving 69. The Creekview boys’ team earned 81 points with the Cherokee boys just a point behind with 80 points.

Yann Fredrick Engamba, 20, will serve time in prison over the holidays for the next three years for charges in a 2018 crash that killed a 17-y…