Cherokee County Commissioners on Thursday rejected a proposal by leaders of local cities to meet publicly to resolve an 18-month standoff on reaching a state-required agreement on service delivery.

On Friday, city mayors expressed frustration the county is rejecting openness and negotiation between elected officials in favor of formal closed mediation process on Service Delivery Strategy that is amassing legal fees for all local taxpayers.

Mayors of local cities in a joint statement Friday afternoon said county commissioners have been reaching out to them privately with requests to discuss service delivery outside public meetings.

“We believe that the public has a right to hear how their tax dollars are spent,” Canton Mayor Bill Grant said.

“The cities want to sit down and get the issue resolved elected official to elected official without the involvement of attorneys,” Holly Springs Mayor Steven Miller said. “The truth is the cities have been the only party proactive with this process.”

At a special meeting Thursday, commissioners turned down a proposed schedule of meetings from the cities and instead asked they continue with a mediation process begun last year.

Commissioners released a statement on the matter on Friday morning that stated in part:

“The Board of Commissioners has attempted to work with the Cities to adopt a mutually acceptable Service Delivery Agreement. The County has done so through the methods prescribed by the Georgia General Assembly, including a comprehensive two-stage dispute resolution process, which was previously agreed to by all parties. The Cherokee County Board of Commissioners has respectfully declined the Cities’ directive to participate in their process and, instead, encourages the Cities to continue through the statutorily mandated dispute resolution process that they previously agreed to.”

The cities’ proposal, raised last month, called for the appointment of two elected members of each city council as well as two district county commissioners to act as conferees to negotiate SDS in three public meetings.

The proposed series of meetings rejected Thursday by the county commission would have taken place Feb. 26 at Canton City Hall to discuss parks and recreation; March 25 at Woodstock’s Chambers at City Center to discuss roads and stormwater; April 22 at a location of county commissioners’ choosing to discuss sources of funds, uses of funds and special tax districts.

The state requires counties and the cities within them to approve a service delivery agreement. Those local governments without an agreement are not eligible to receive some state funding for new local projects, receive state permits and or receive incentives for economic development projects. 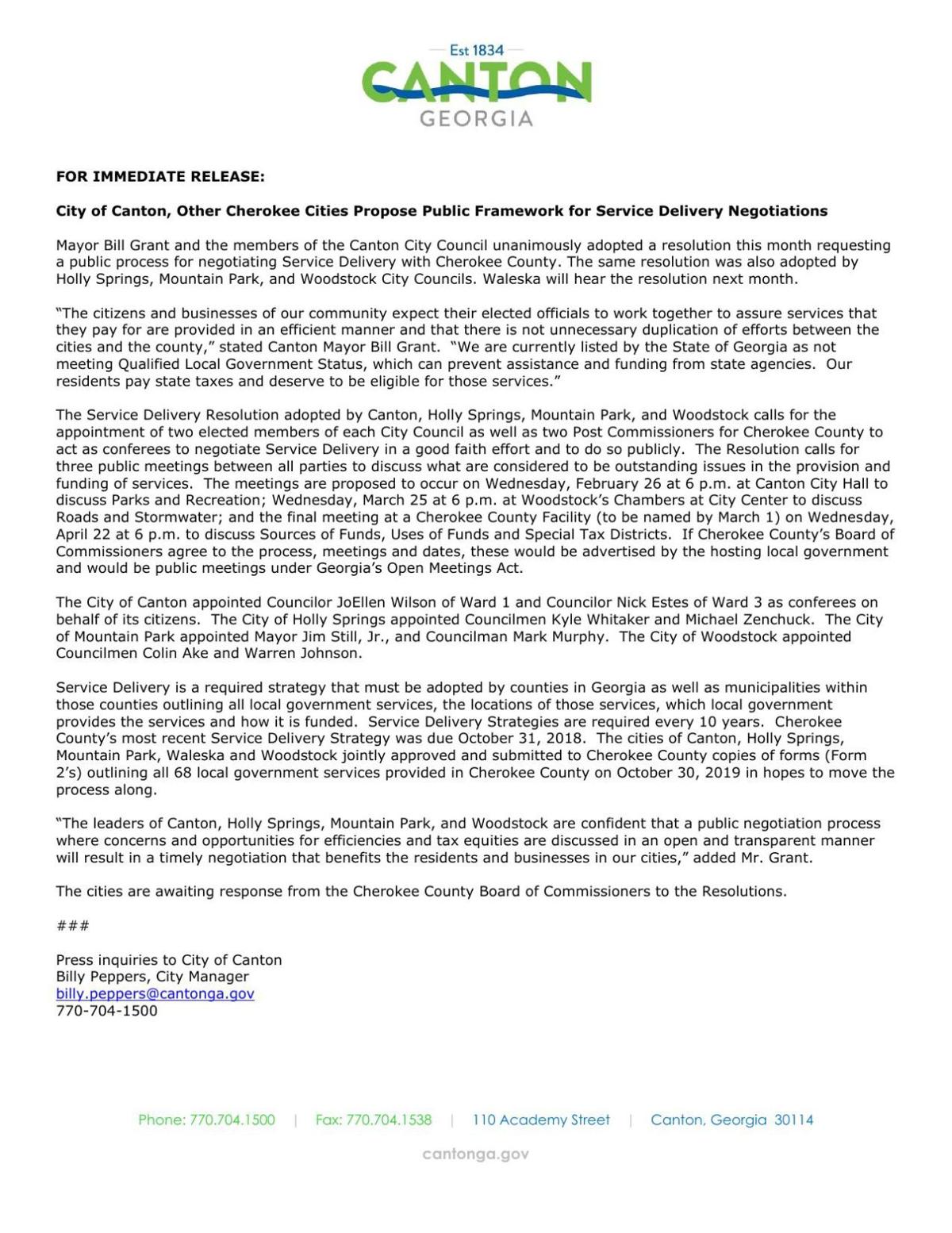 What is service delivery and why can't Cherokee County and its cities get along?

In 2018, a state requirement to renew service delivery agreements sparked a dispute locally on how residents should be taxed for city and coun…

Do your job elected officials!

Yeah! What he said!