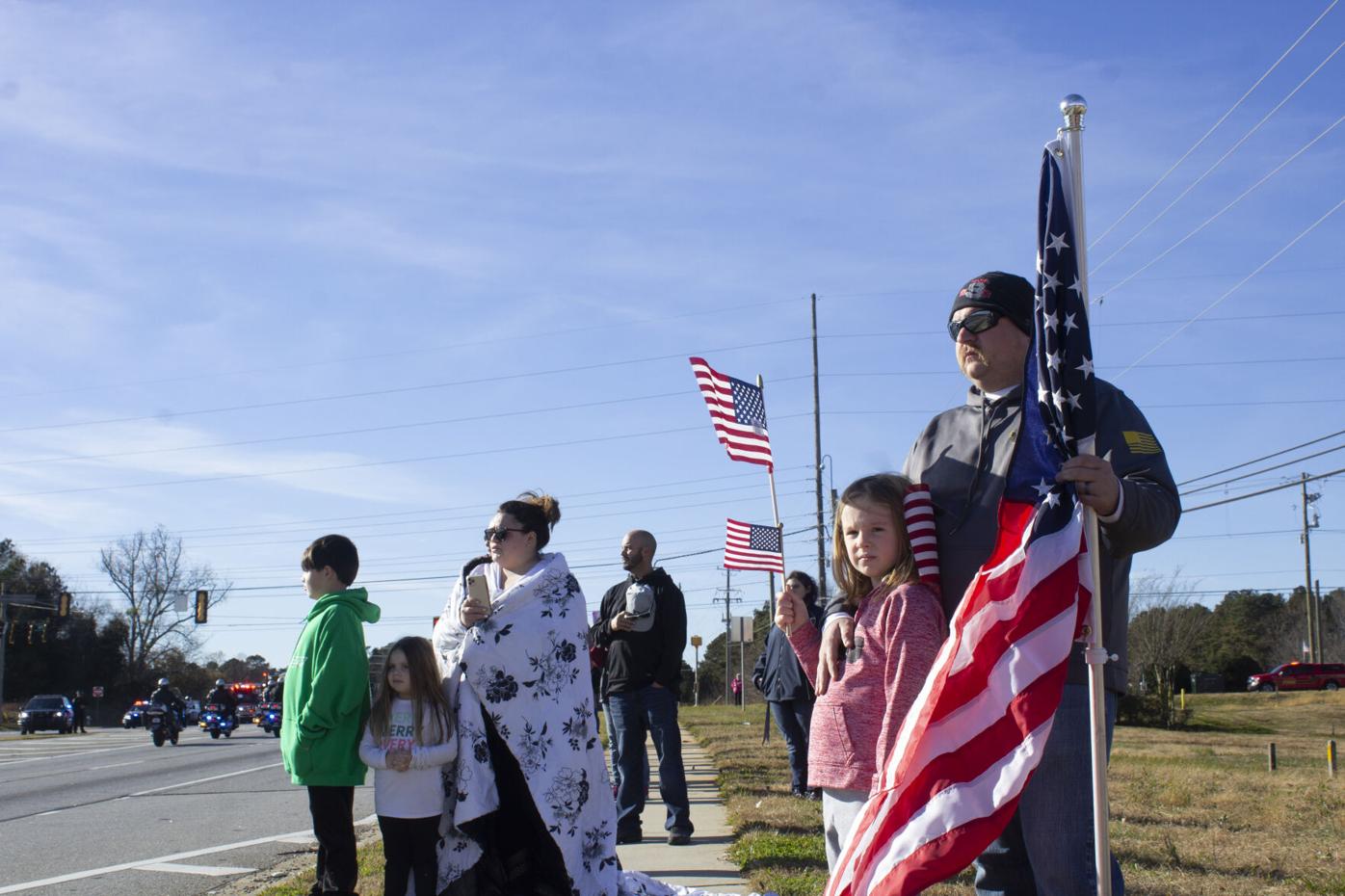 Ben Meadows, a Cobb County firefighter, and his daughter Abigail, watch the funeral procession for Justin and Amber Hicks. 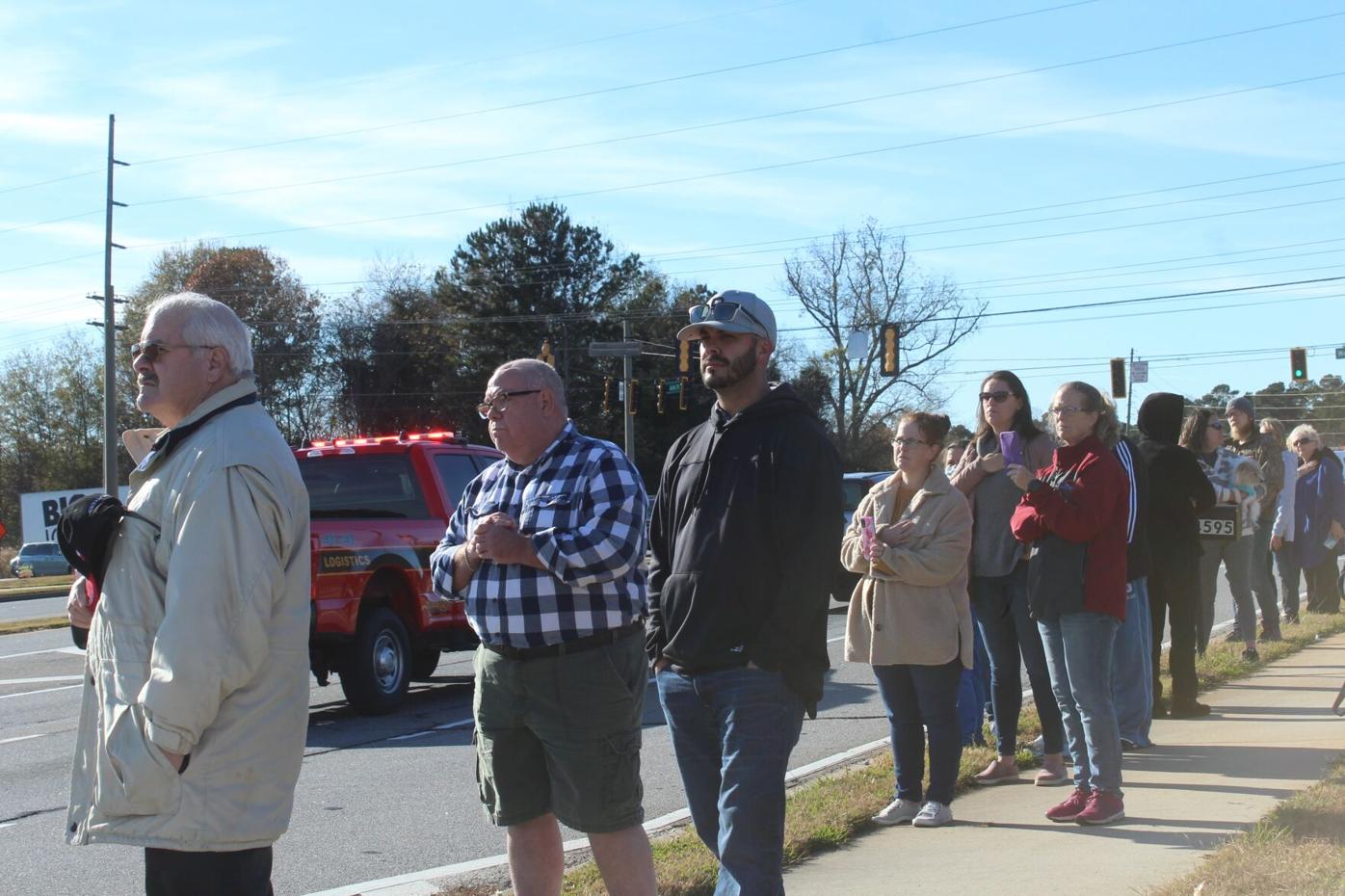 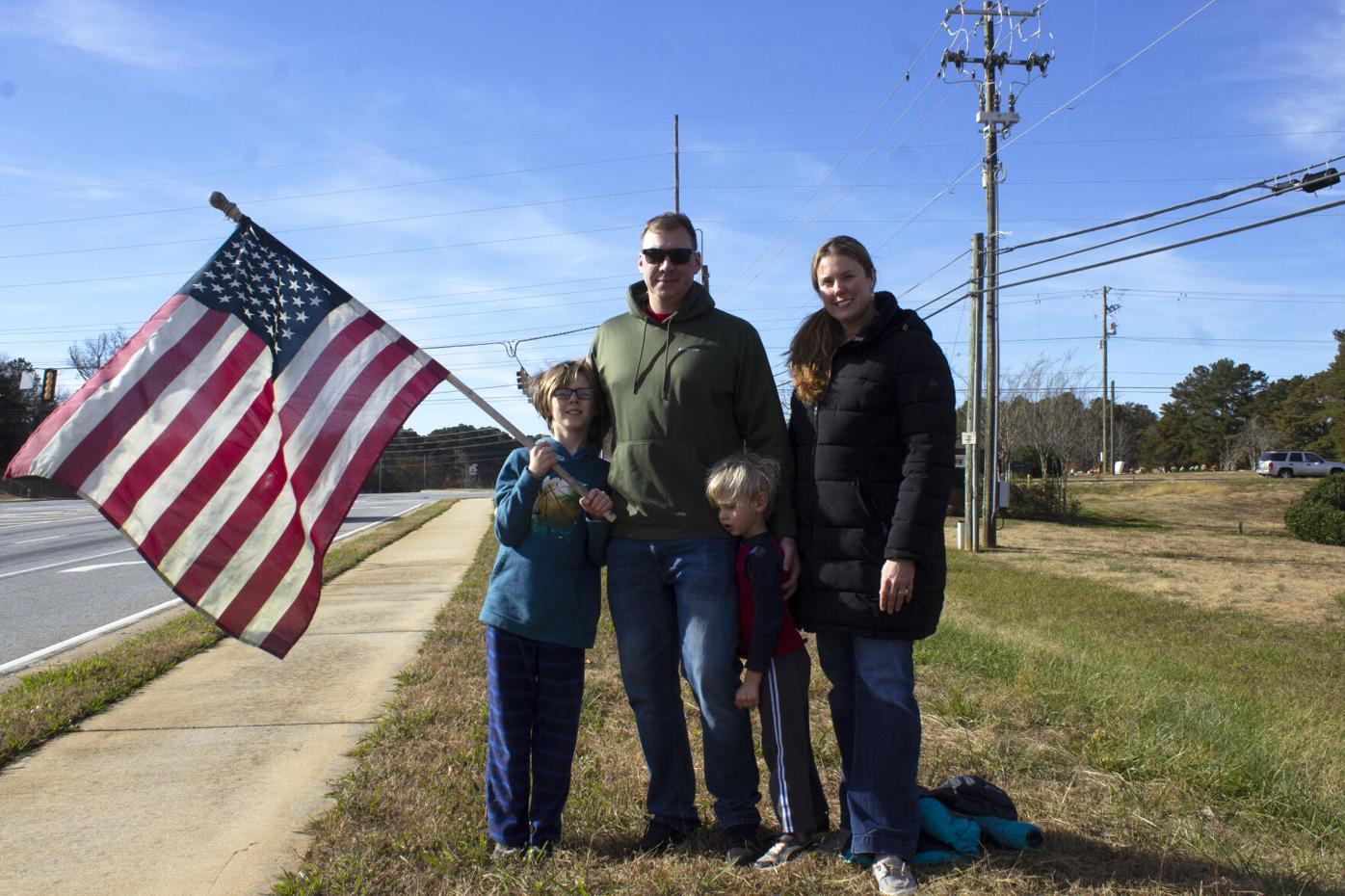 Tommy Goddard from Acworth holds a large American flag with his parents, Chris and Olivia Goddard, and his brother Ben. 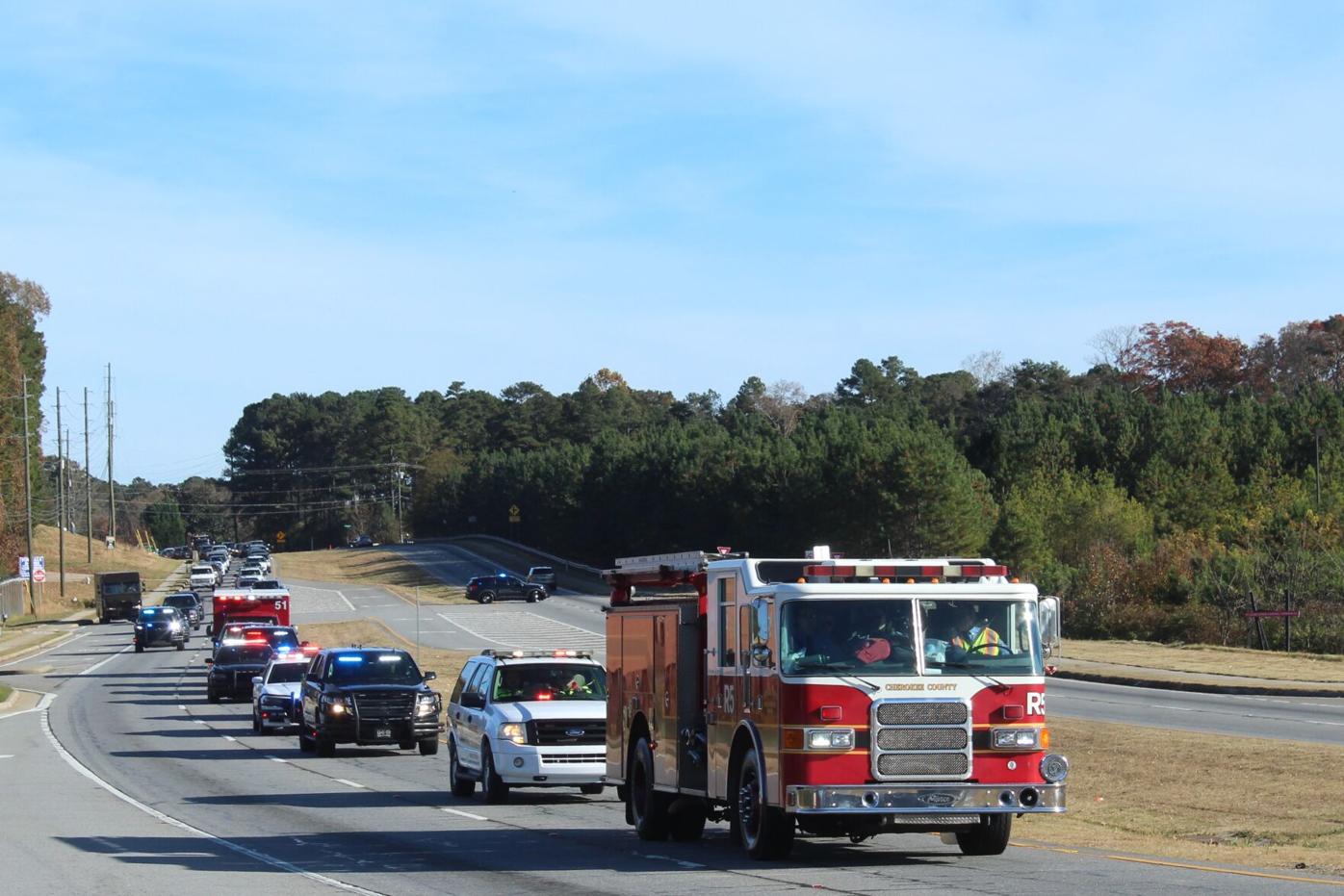 A procession of public safety vehicles travels along Highway 92 near Acworth to Rolling Hills Memory Gardens. 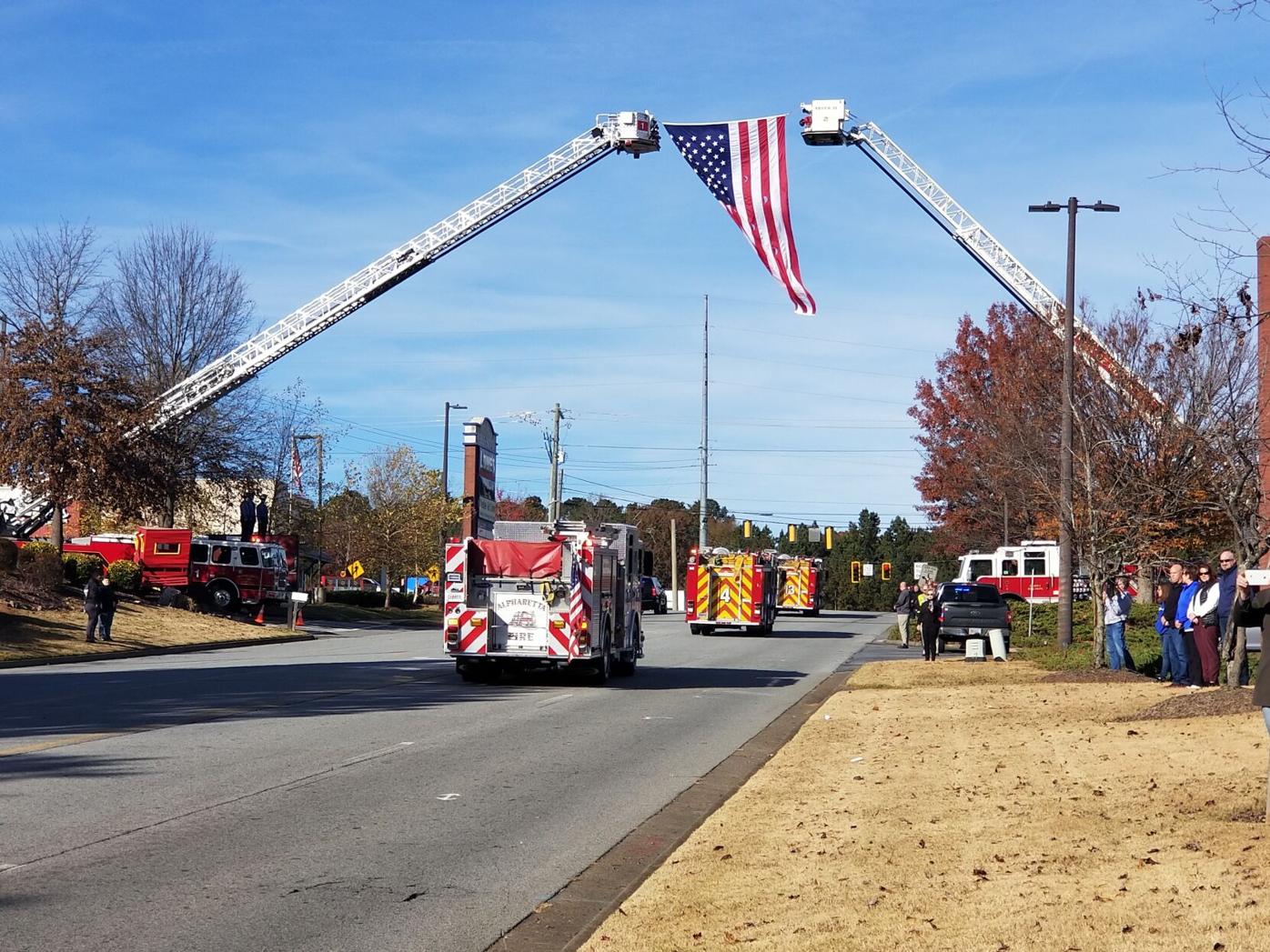 A large flag hangs outside His Hands Church in Woodstock in memory of Justin Hicks, who was a Cherokee County firefighter.

Ben Meadows, a Cobb County firefighter, and his daughter Abigail, watch the funeral procession for Justin and Amber Hicks.

Tommy Goddard from Acworth holds a large American flag with his parents, Chris and Olivia Goddard, and his brother Ben.

A procession of public safety vehicles travels along Highway 92 near Acworth to Rolling Hills Memory Gardens.

A large flag hangs outside His Hands Church in Woodstock in memory of Justin Hicks, who was a Cherokee County firefighter.

The couple was found by Cobb County police Thursday morning, dead from gunshot wounds at their Acworth home. Justin Hicks was a Cherokee County firefighter.

Their 2-year-old son was found unharmed and is now with family members, according to Cobb police.

Hundreds nearly filled the His Hands worship center Tuesday with a long, winding line of those wishing to pay their final respects running through the auditorium throughout the late morning into the afternoon.

A notable number of those in attendance wore the Class A uniforms of Cherokee Fire as they mourned the loss of their fellow first responder and his wife.

During the service, Amber’s first cousin described how the two became close when Amber was a teenager. Amber had asked to know more about her mother, who had died shortly after she was born. The cousin hopes one day to tell the Hicks’ son, Jacob, about his mother and her life.

Several Cherokee County firefighters gathered together at the podium, built from parts of a fire truck ladder, as Justin’s close friend and fellow firefighter told humorous anecdotes about Justin, including pranks that Hicks endured with a smile. There were several references made to Justin’s large stature and the all-encompassing bear hugs he gave.

While hundreds of people made their way from the church to the couple’s final resting place at Rolling Hills Memory Gardens, a smaller group of about 30 waited along Highway 92 near the cemetery to pay their respects.

Chris Goddard, an active Army service member from Acworth, brought his wife and two children to watch the procession. His family didn’t know the couple, but they wanted to show their support.

“Everybody is so upset at how senseless it was,” he said. “We’re trying to instill values in our children, so they know what it means to pay respects to those who serve the community.”

Tim Cavender, public information officer for the Cherokee Fire Department, said the deaths of Justin and Amber Hicks are a tragedy.

“It’s been a difficult past few days for the Cherokee County fire family,” he said. “Justin came to work for us in 2015 through his desire to become a firefighter. He was an excellent firefighter who was loved by so many.”

Cavender said Justin Hicks loved working in public safety and enjoyed helping others. He added that everyone at the department that met him had nothing but positive things to say about the late firefighter.

“It has broken our hearts that this happened, and we ask that everyone keep their little boy in your thoughts and prayers,” Cavender said. “Losing Justin and Amber Hicks was tragic.”

Cavender said he is amazed at how different public safety agencies throughout Georgia come together during times of sadness, adding that it is a blessing to receive that support.

Police have charged Matthew Lanz, who lived at an adjacent house, with the killings. Lanz, 22, is a University of Georgia student and attended Kennesaw Mountain High School, according to his LinkedIn profile. He is being held in the Fulton County jail on other charges related to Friday’s stabbing of a Sandy Springs police officer.

The Hicks’ home is located on Verbena Drive in the quiet Chestnut Hill neighborhood, home to cul-de-sacs, manicured lawns and a small lake. It shares a back fence with the Lanz home, property records show.

A Cobb arrest warrant for Lanz says he forcibly entered the Hicks’ home by breaking a window before shooting both victims multiple times. Police believe the crime occurred some time between 7 p.m. Wednesday and 9:34 a.m. Thursday.

A day after the couple were found, Sandy Springs police responded to a reported burglary. When they arrived, an officer was attacked and stabbed by Lanz, according to Sandy Springs police. Another officer shot Lanz, who was treated at a local hospital, police said.

In Cobb, Lanz is charged with two counts of felony murder, two counts of aggravated assault, first degree felony home invasion, and possession of a firearm during the commission of a felony, his warrant states.

FBI officials said Austin Lanz got off a bus at the Pentagon Transit Center in Arlington, Virginia Aug. 3 and “immediately, without provocation, attacked Pentagon Force Protection Agency Officer George Gonzalez with a knife, severely wounding him.” During the ensuing struggle, Austin Lanz “mortally wounded” Gonzalez and then shot himself with the officer’s weapon, according to the FBI.

Before fatally stabbing the Pentagon officer, Austin Lanz reportedly harassed and intimidated the former residents of the Hicks’ residence, Phillip Brent and Eliza Wells. Brent told the Washington Post in August that Austin Lanz left pornographic photos, lewd messages and strange items at the house, and admitted to watching Wells, his then-fiancee, through the window. He later broke into the home and was arrested. At the Cobb County jail after the break-in, he reportedly attacked two deputies.

Neighbors said Tuesday that they were shocked by the killings. None who spoke to the MDJ knew the Hickses well, as they had only just bought the home in late August. They recalled learning about the shooting Thursday morning, waking up to their street being mobbed with police cars.

Rashun Prince lives a few doors down from the Hickses with his mother, Brenda Reid.

“They were quiet, the family (the Hickses) was quiet. They just moved in, they kept to themselves for the most part. Didn’t see any issues with that family,” Prince said.

“I’ve seen, and spoken with the two brothers that lived there. I would have never expected,” Reid said.

“This neighborhood’s always been peaceful, always been quiet,” said Prince, before saying he didn’t know about Austin Lanz’s stabbing of the Pentagon officer. Neighbors seemed to think both brothers must have mental health issues.

“Just knowing that it’s in the family, this type of situation … it’s tough in this world, where people who need help, there’s not enough resources to help these subjects,” Prince said.

A retiree who would only give his first name, Jim, said the shooting was evidence of “moral decay” in society, adding that he’s not a religious person.

“There are some things you can’t undo,” Jim said of violent incidents across the country. “We’re seeing things that we can’t undo. We cannot undo the past, but we can stop and change. I think that’s critical.”

Another neighbor, Leigh Rogers, met the couple on Halloween, when most residents of the area sit on their porches and driveways, handing out candy to trick-or-treaters.

“The father was in his fireman uniform, they were all trick or treating, and just looked really cute and sweet,” Rogers said.

Rogers knows the Lanz family and said she felt for the mother. She declined to get into details, besides saying she was shocked by the incident.

“They’ve got to be in shock about the whole thing too. I haven’t seen them since, they’re gone,” Roger said.