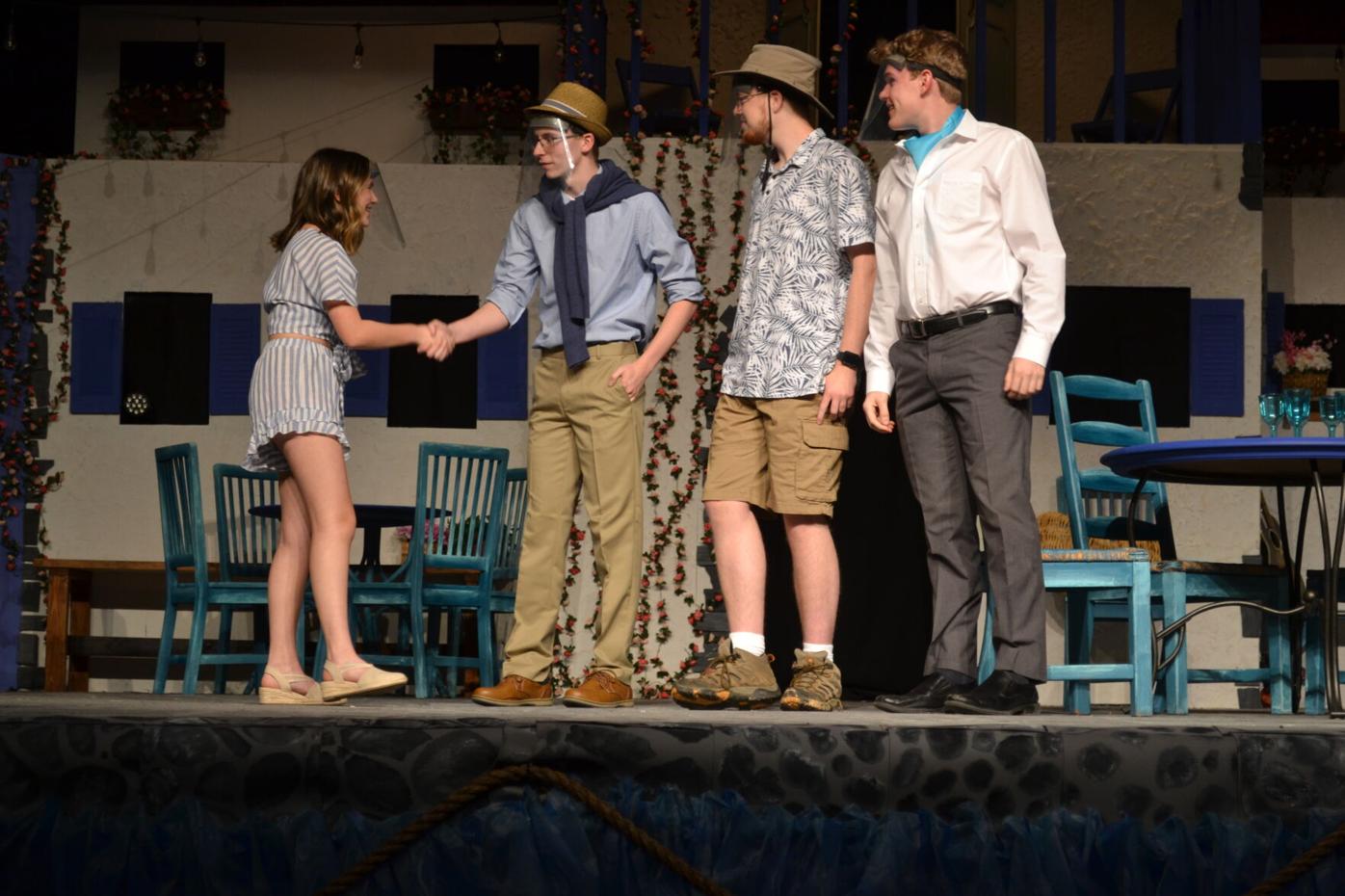 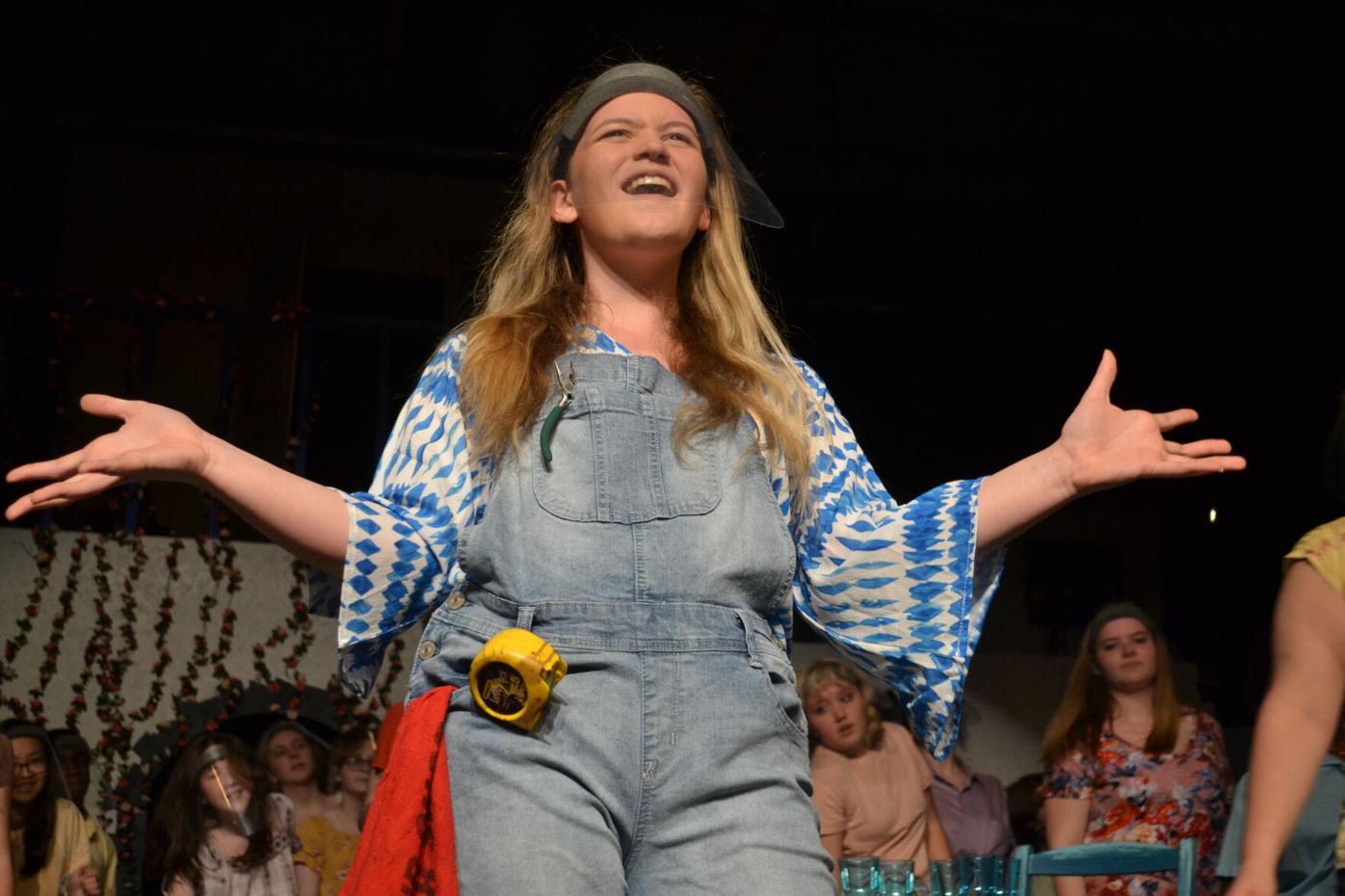 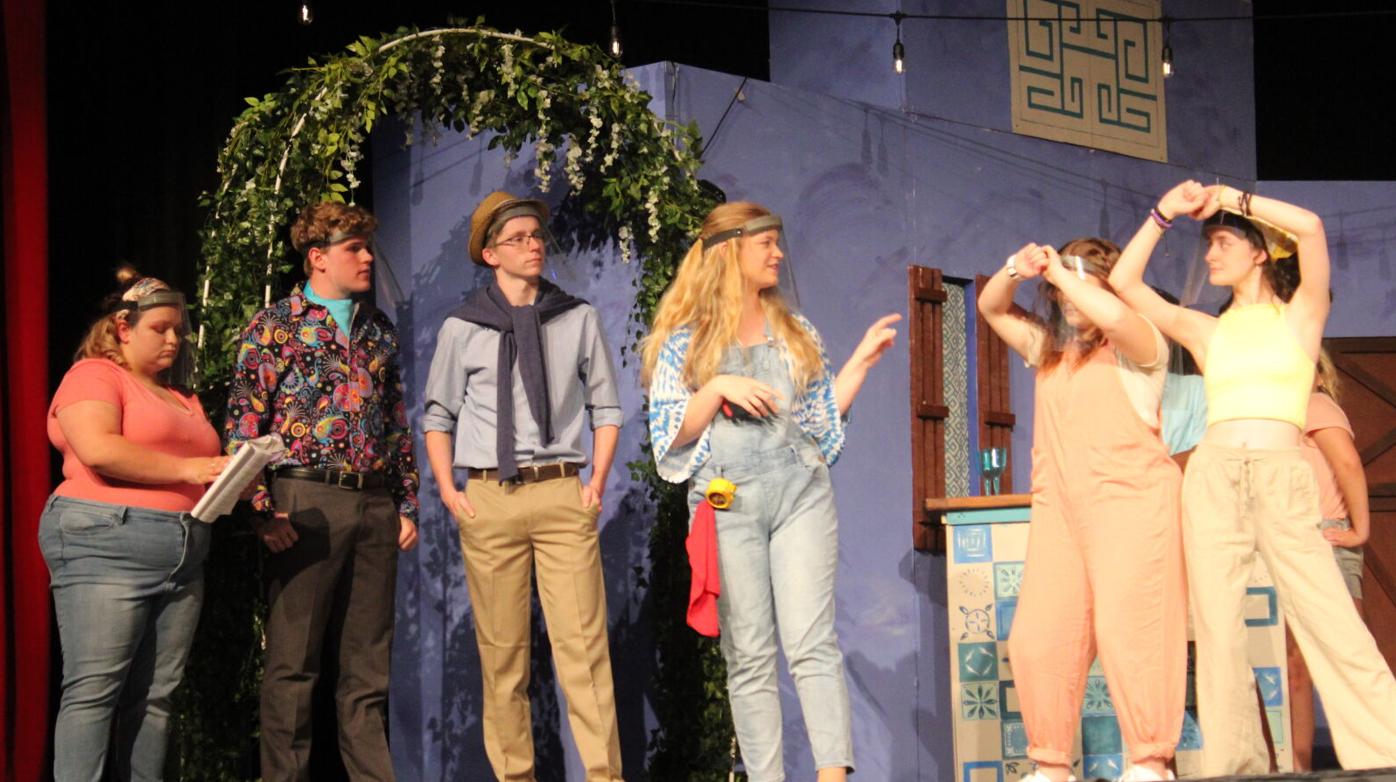 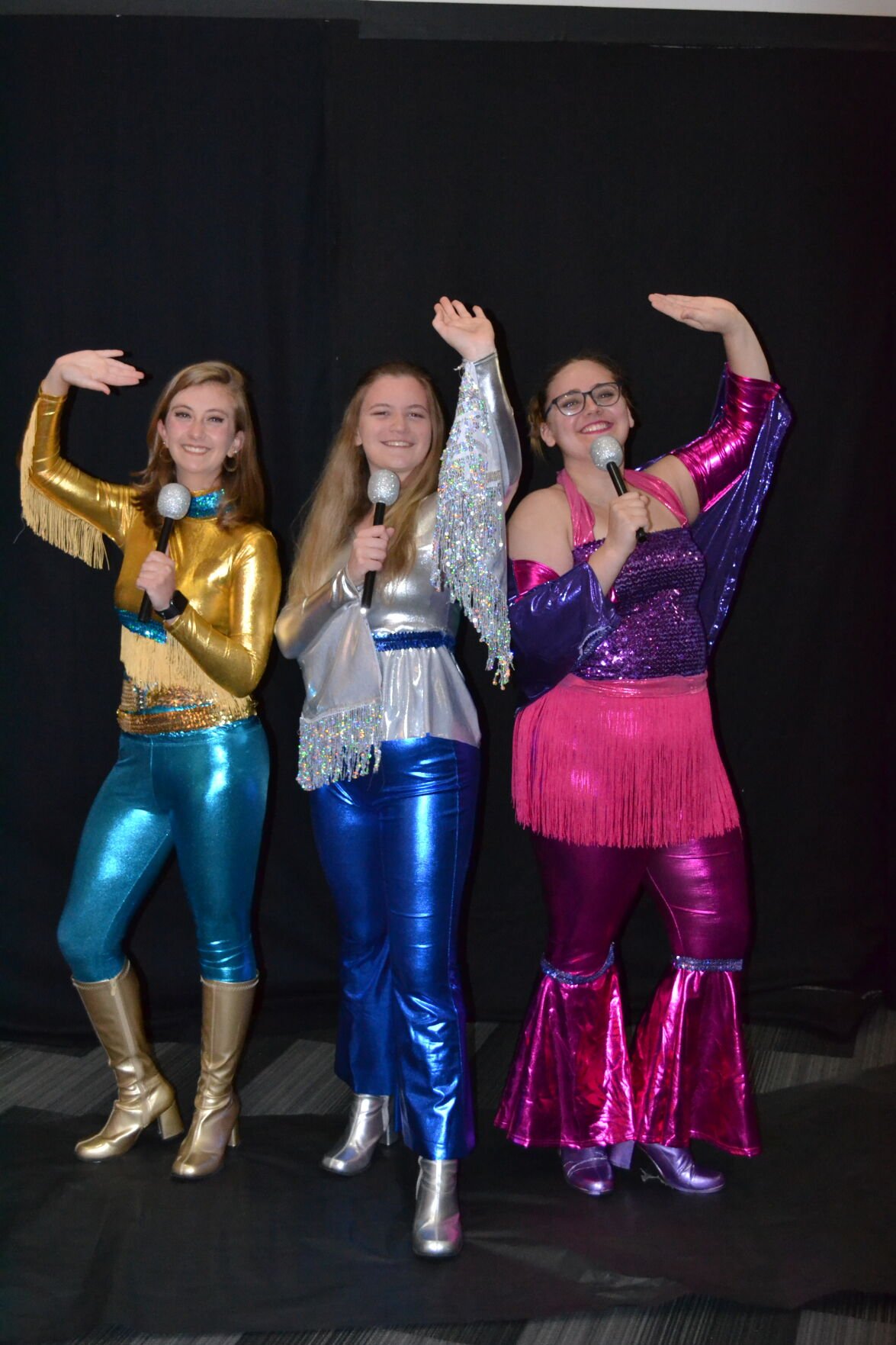 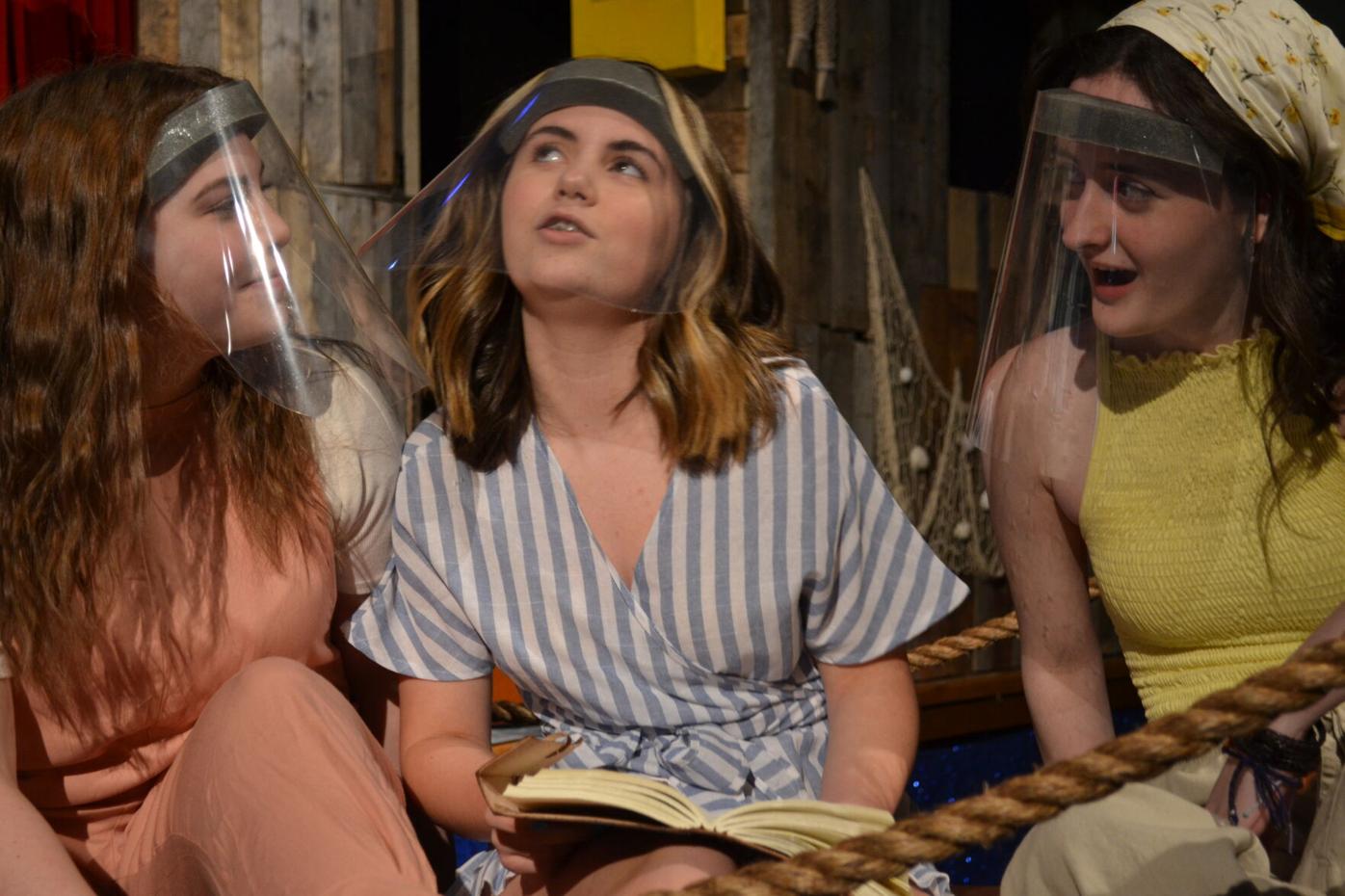 Amelia NeSmith as Sophie (middle) explains to her friends Lisa and Alli, played by Rebecca Kraft and Sarah Copen, that she found her mom’s diary and she has invited three men to her wedding and, any of them could be her dad. 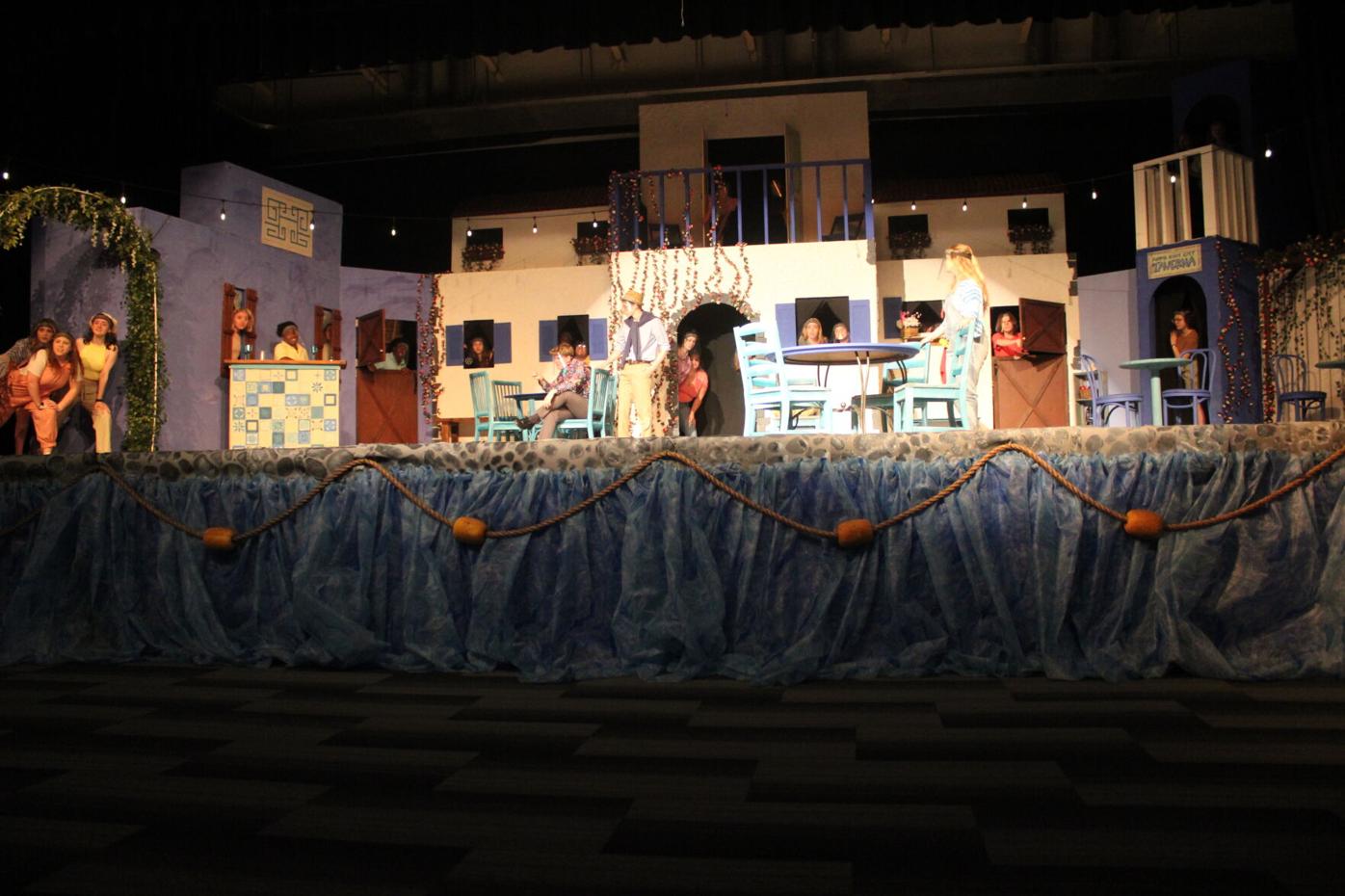 The cast comes out for an ensemble musical number. 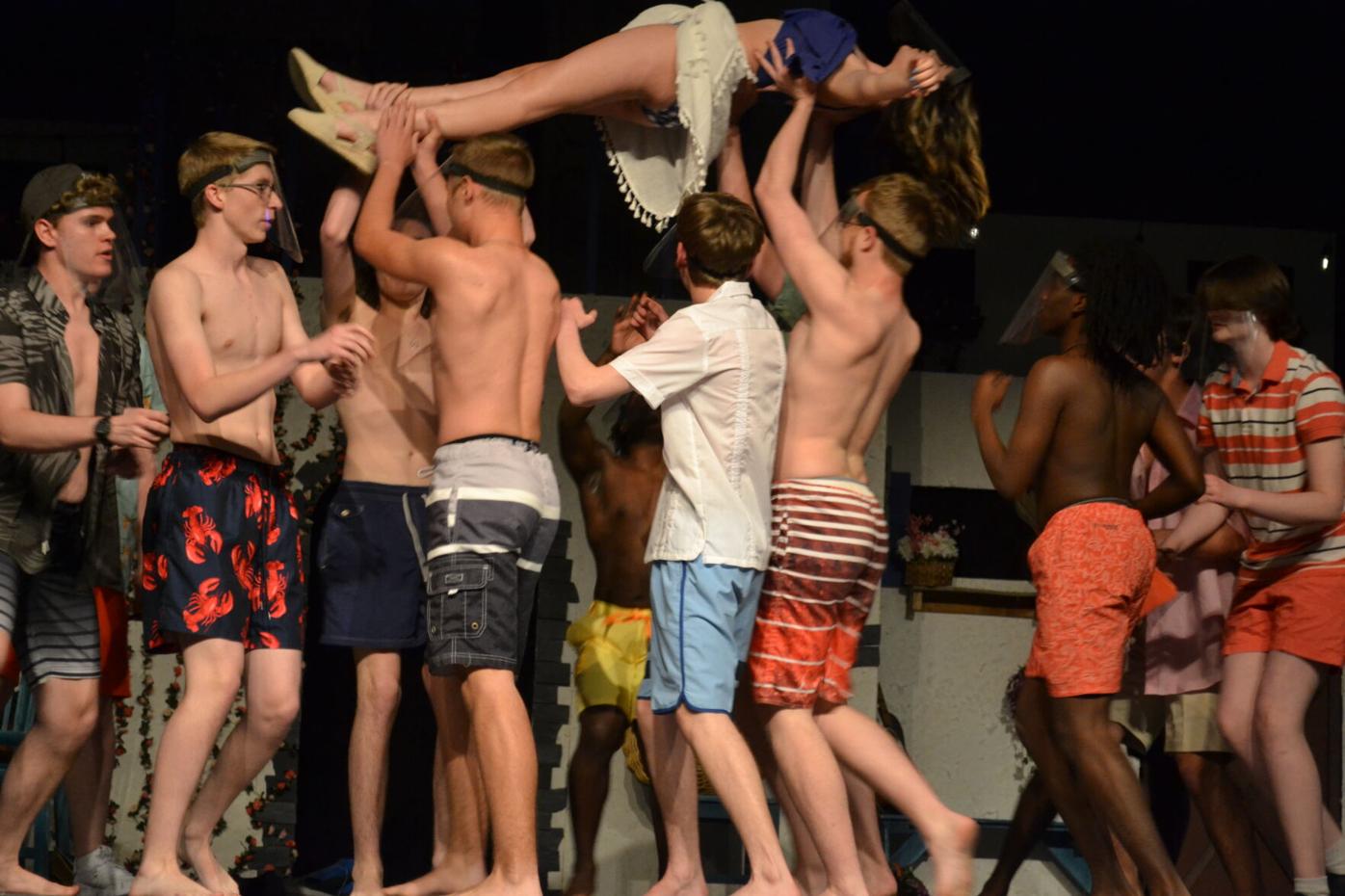 Amelia NeSmith as Sophie (middle) explains to her friends Lisa and Alli, played by Rebecca Kraft and Sarah Copen, that she found her mom’s diary and she has invited three men to her wedding and, any of them could be her dad.

The cast comes out for an ensemble musical number.

When the cast of Cherokee High School’s theater program sees its audience from on stage Friday, they will do so through plastic face shields, a reminder of the pandemic that put performances on pause last year.

Jodi Burn, theater director at Cherokee, said “Mama Mia!” will be the school’s first major performance in two years, though the students did several smaller scale shows over the last few months such as “Disenchanted the Musical” in November.

Starting at 7 p.m., the first of eight showings of “Mamma Mia!” will be held in the auditorium at Cherokee High School, 930 Marietta Highway in Canton.

“Mamma Mia!,” based on the 1999 musical that inspired the popular 2008 film of the same name, tells the story of Sophie, who mails three letters to three men after finding her mom’s journal. Her mom, Donna Sheridan, was in a romantic relationship with three men during the summer before Sophie was born. Sophie doesn’t know which one is her father, so she invites all of them to her wedding to try to find out. The story is told through the music of Swedish pop group ABBA.

The show was originally supposed to run in March last year, but due to the coronavirus pandemic, production was halted. This sudden roadblock led to a sense of uncertainty that came over the cast and crew as the realization set in that they may not be able to run the show in 2020.

“We began casting roles for the show in December of 2019, with the expectation that we could run the show in March of 2020,” Burn said. “Unfortunately, we had to halt production of the show because of the coronavirus pandemic. We were doing Zoom calls and voice lessons as long as we could in hope that we could still put on a show, but ultimately, the situation just didn’t allow it.”

Burn said production on the play didn’t start again until this year, and because of the two year gap, a few of the roles had to be recast due to graduating seniors.

“We had to start rehearsals all over again in January,” she said. “One of the seniors who is now in college came to see one of the rehearsals, and it just breaks your heart that their senior year was robbed from them like that.”

Will DeMartini, a sophomore in the show, said it was a difficult time for everyone involved last year.

Senior Kyleigh Mitchell, one of the dance captains for the show, said she was worried that she may not be able to take part in the production like the seniors before her.

“It was devastating to think that I may never be able to step on my high school stage again,” she said in a statement. “When I learned we were going to be able to perform “Mamma Mia!” this year… I cannot express the happiness I felt. In these dark times when so much has been cancelled for us seniors, this means everything.”

Burn said one of the biggest obstacles that the theatre staff and students had to overcome the last few months is the lack of understudies.

“We weren’t able to have any understudies because it’s such a big cast,” she said. “It’s been a little stressful because one of our lead actors is out right now in quarantine due to contact tracing, but thankfully he will be back Friday evening.”

Performances will be held in the auditorium at Cherokee High School, 930 Marietta Highway in Canton. Tickets to the shows are limited. The auditorium seats 1,142, but only 150 people are allowed per performance. Tickets may be purchased at www.simpletix.com/e/mamma-mia-tickets-65866, or at the door as long as the show isn’t sold out.

The show times are as follows:

Woodstock High School Drama kicks off the weekend Thursday with “You’re A Good Man, Charlie Brown!” which runs through Saturday.

Performances are 7 p.m. Thursday, Friday and Saturday in the Woodstock High School Auditorium, 2010 Towne Lake Hills Drive, Woodstock. Tickets are $8 for students and $10 for adults. Masks and social distancing are expected and students will be asked to present ID.

“Radium Girls” follows three girls’ journey to justice after they become ill from radium exposure at the watch factory where they work. Two different casts of 15 students will perform the show each night, with a crew of five students who work on both shows.

Performances are 7 p.m. and 8 p.m. Friday, Saturday and Monday. Tickets are $5. Seating is limited. To purchase advance tickets, visit https://gofan.co/app/school/GA25508.

A teacher from Indian Knoll Elementary School is the Cherokee County School District Teacher of the year.