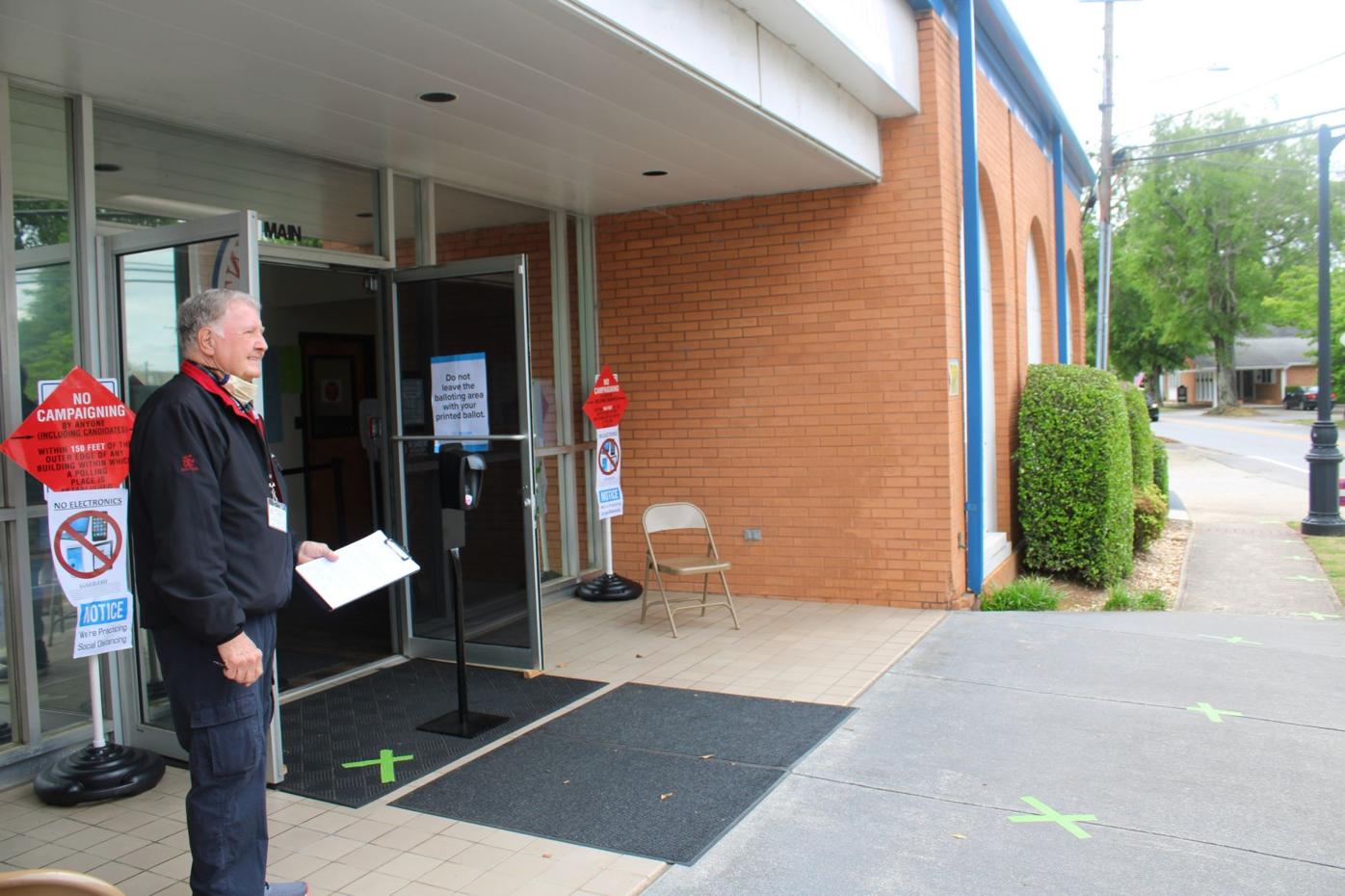 Despite a lull in the number of citizens Wednesday morning participating in early voting, poll worker Corky Jones stands outside the Cherokee County Elections and Voter Registration Office in Canton, ready to assist voters as they arrive at the office. Director Kim Stancil said early voting has been fairly steady since it began on Monday. 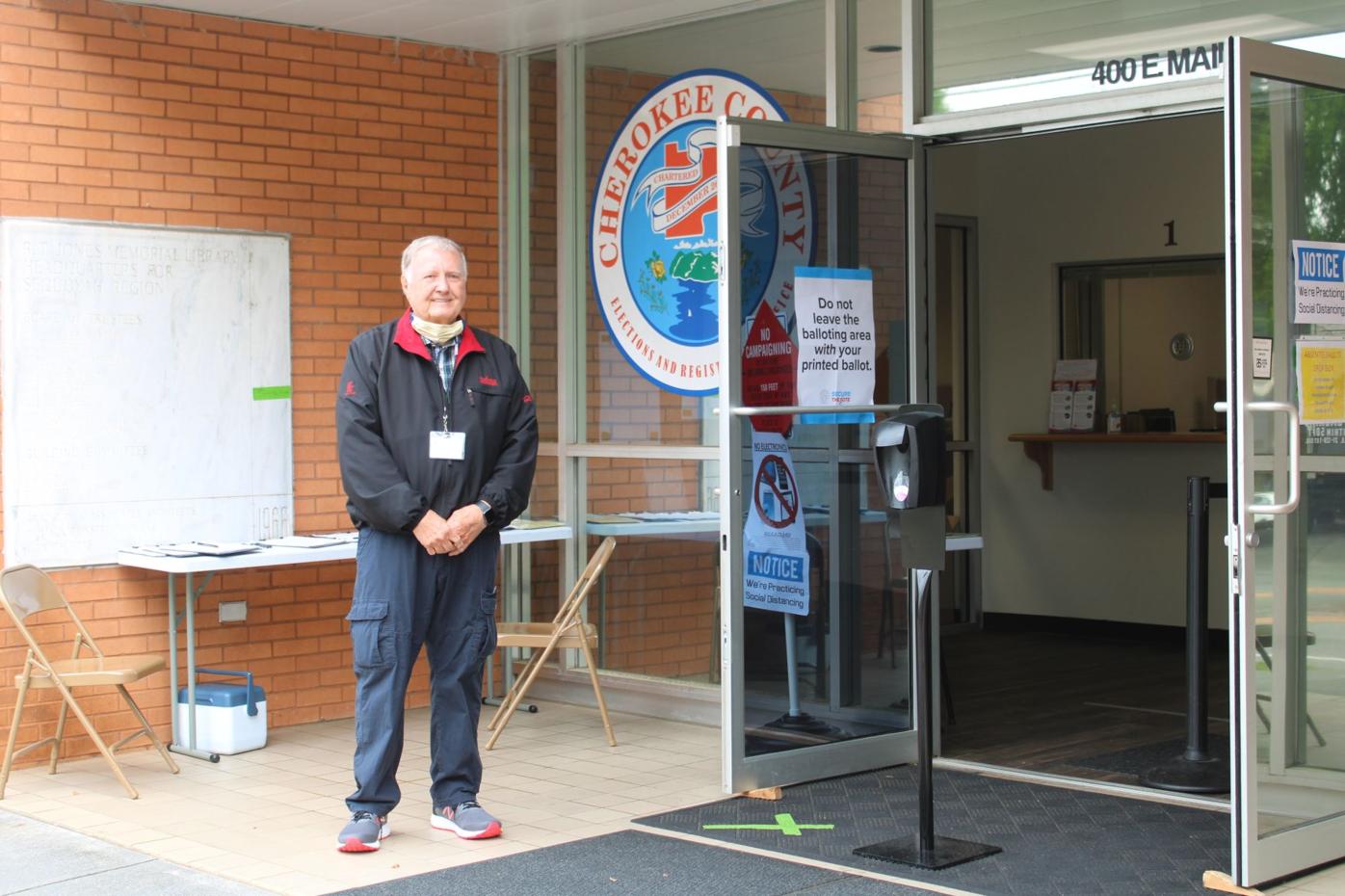 Despite a lull in the number of citizens Wednesday morning participating in early voting, poll worker Corky Jones stands outside the Cherokee County Elections and Voter Registration Office in Canton, ready to assist voters as they arrive at the office. Director Kim Stancil said early voting has been fairly steady since it began on Monday.

Despite concerns caused by the novel coronavirus pandemic, Cherokee County residents are still turning out in steady numbers to cast early ballots for the 2020 primary, scheduled for June 9.

Cherokee County Elections and Voter Registration Director Kim Stancil said things have been going well so far, with no complaints or issues having been heard from voters wanting to submit their ballots early, either through the mail or in person.

Early voting began Monday at both the Elections and Voter Registration office in Canton and the South Cherokee Annex in Woodstock, and the number of early votes cast has been fairly steady. According to information from the elections office, a grand total of 590 early ballots had been cast during the first two days of early voting in the county, of which 387 came from the Canton office and 203 were tallied at the South Cherokee Annex. Stancil said, while the Woodstock location was not seeing as much traffic as Canton due to it being a fairly new location for early voting, it was doing just fine.

When the state began mailing out vote by mail applications to every registered voter in Georgia, Stancil said an outside vendor was handling much of the work involved, but that starting on May 29, the county election office would be able to mail out ballots to Cherokee County residents submitting such a request. While requests can be submitted all the way up until June 5 (the Friday before Election Day on June 9), those who wait until later will have a tight schedule to work with to ensure their vote is counted.

“Ballots sent out by mail have to be in to our office by 7 p.m. on Election Night,” Stancil said.

Of the 43,134 ballots mailed out to Cherokee County voters so far, 16,687 have been returned and tallied as of the end of the day Tuesday. Along with this, another 273 mailed out and returned were labeled as canceled, rejected or spoiled. However, Stancil said a large majority of those in this classification were considered canceled, due to people who received them and filled them out, but then brought them in and asked to have them canceled so they would be able to vote in person.

This election cycle marks the first use of the new voting machines approved by the state, which have not presented any problems for early voters in Cherokee County.

“The new machines have been working great,” Stancil said.

The Canton and Woodstock polling centers will be open 8:30 a.m. to 5 p.m. Monday through Friday now through May 29, with the exception of Memorial Day on Monday, for early voting. The two locations will be open from 9 a.m. and 4 p.m. on Saturday, May 30 and from 8:30 a.m. to 7 p.m. Monday, June 1 through Friday, June 5 for advance voting. Voters choosing to cast their ballots on June 9 can do so from 7 a.m. to 7 p.m. at their normal polling location. To find your Election Day polling location, visit www.mvp.sos.ga.gov.

CFES reminding everyone to stay safe on Memorial Day weekend

This Memorial Day weekend, many families may choose to spend time around swimming pools, lakes and rivers. Before heading out for some water-b…

Cherokee County Fire and Emergency Services added another squad to its fleet of ambulances over the weekend, helping keep the residents of Che…

Board of Commissioners approves changes to upcoming meeting schedule

During Tuesday night’s meeting of the Cherokee County Board of Commissioners, the board decided to make some slight modifications to the plan …

The Woodstock City Council was busy during Monday night’s meeting, hearing a request for a monument sign waiver to be installed at a new devel…