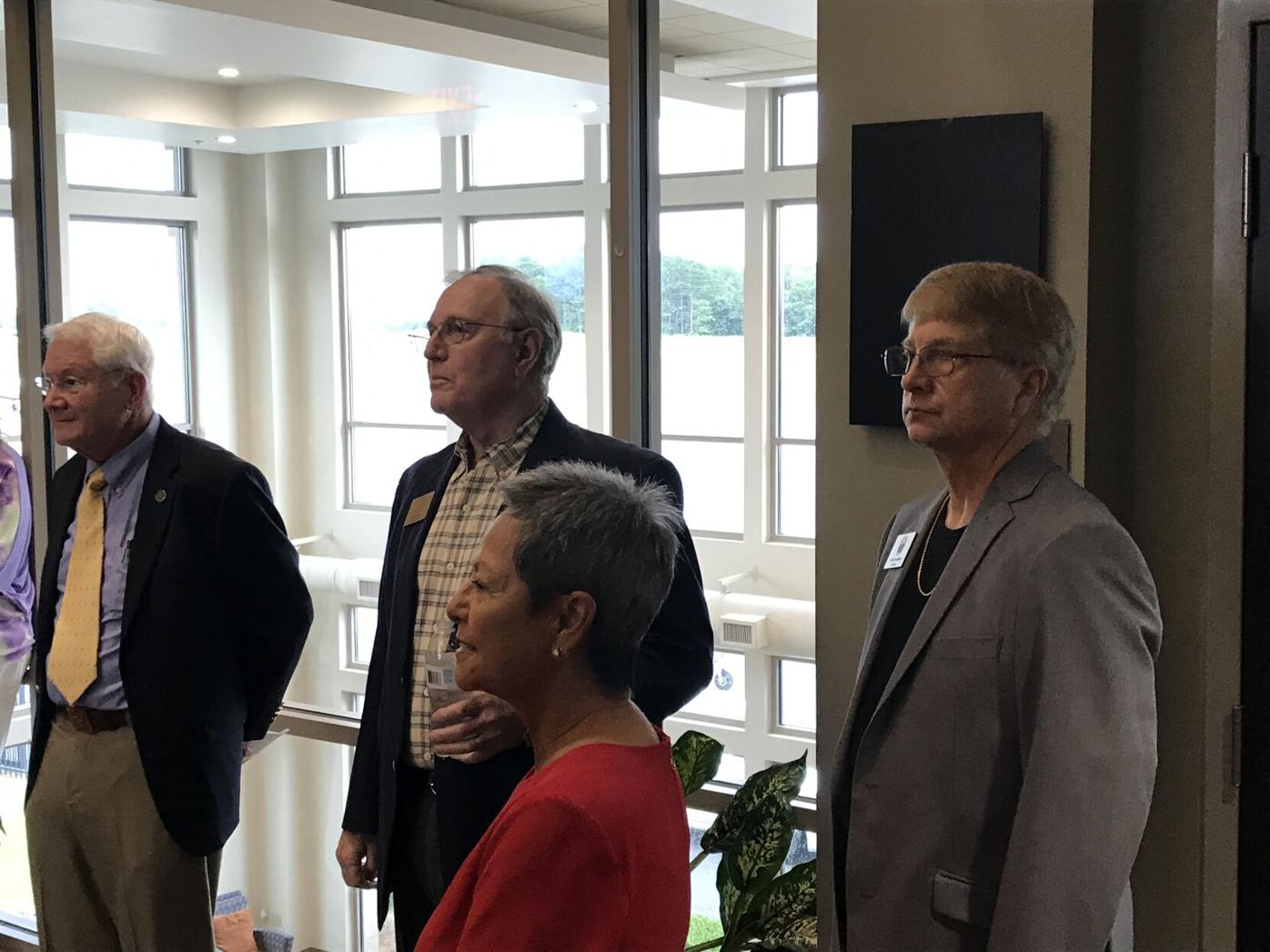 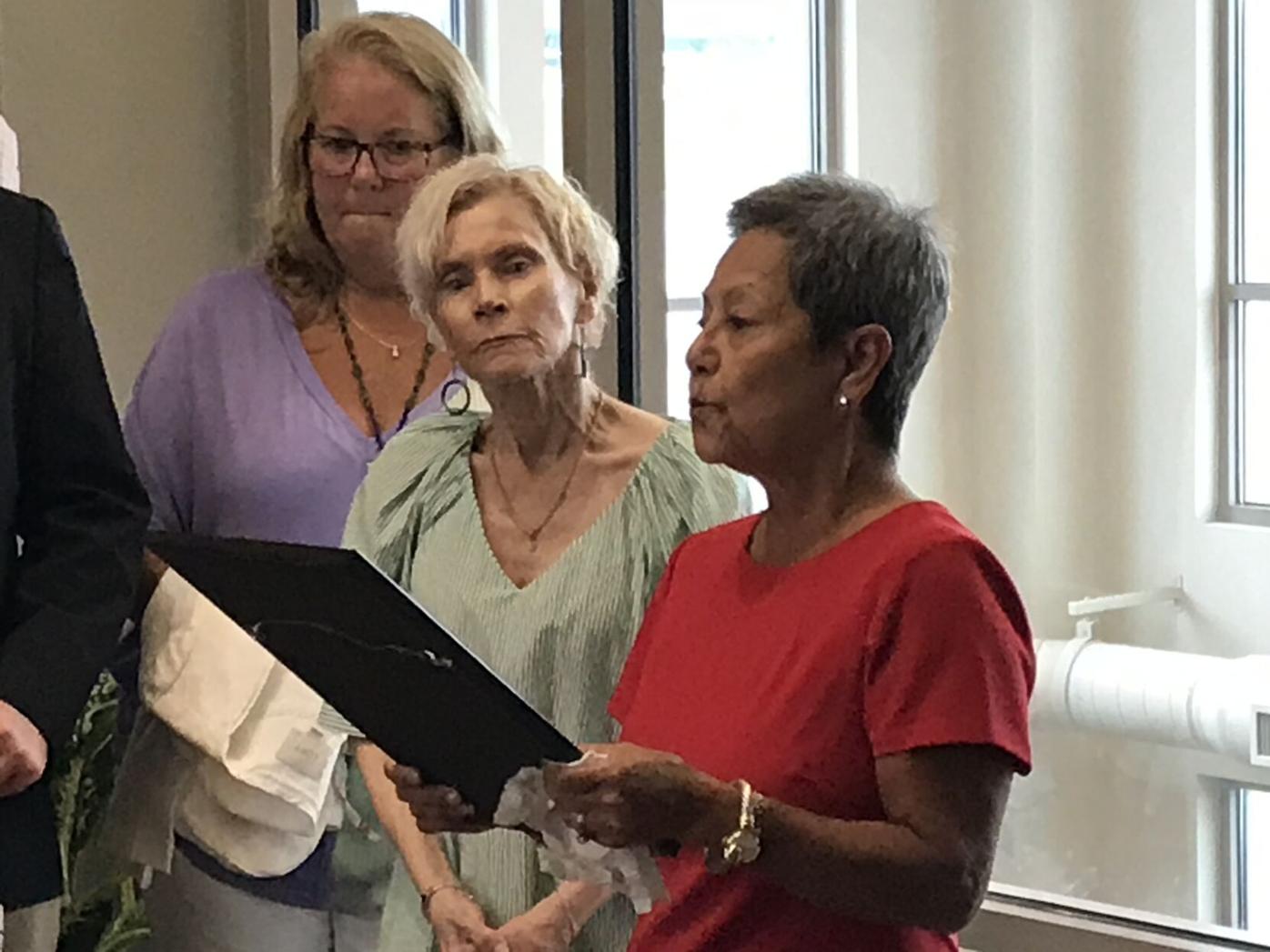 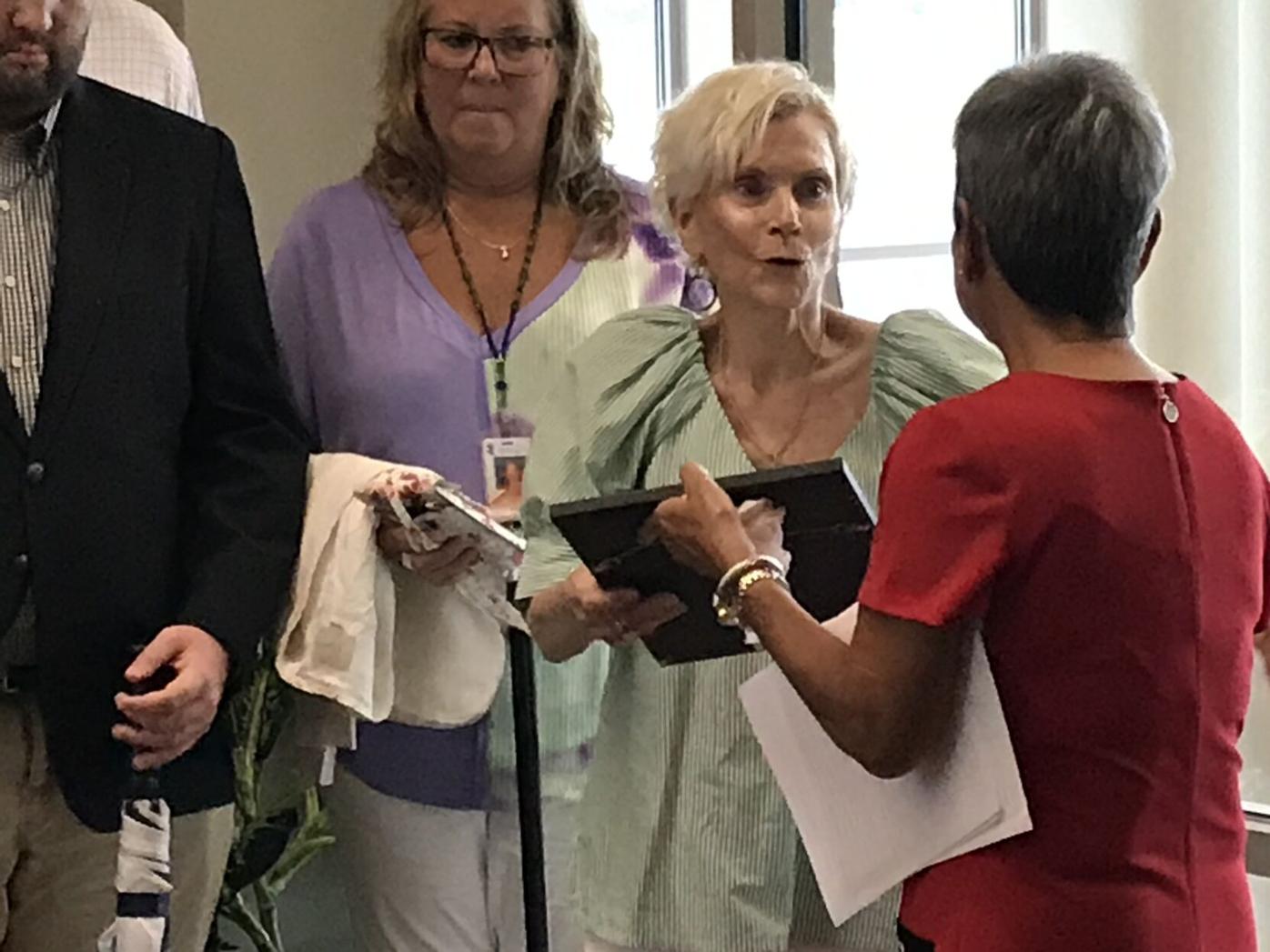 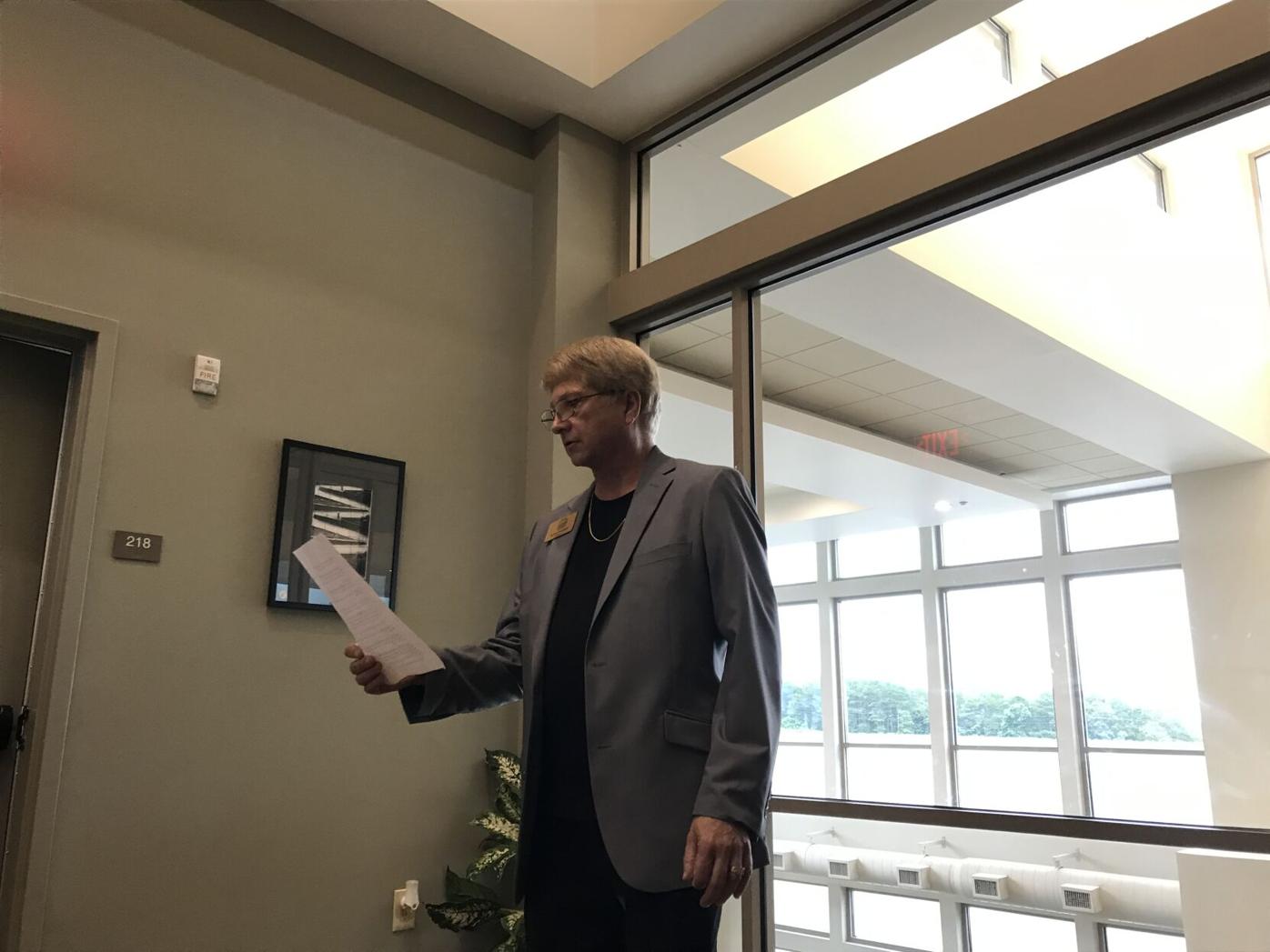 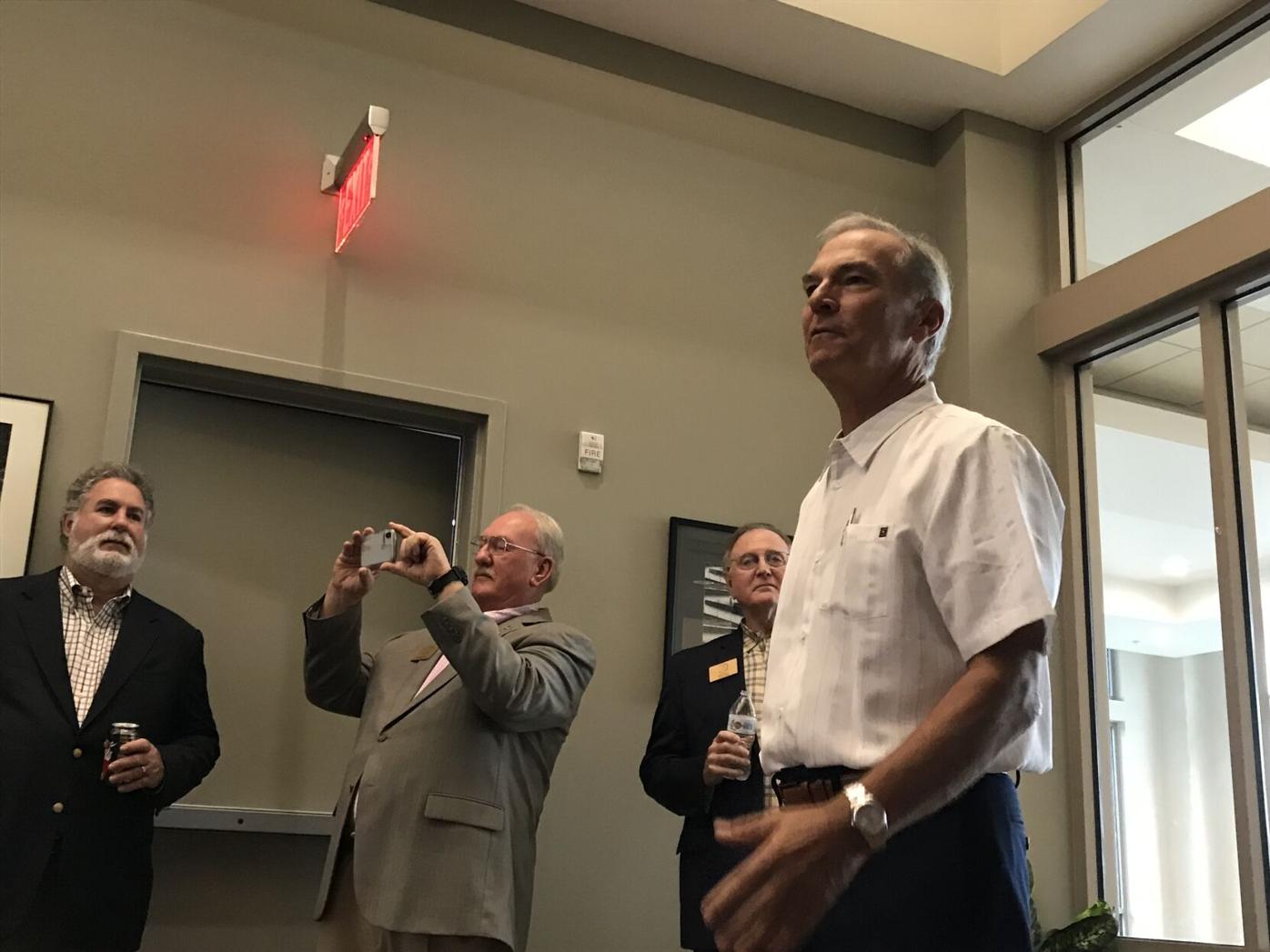 Cherokee County Board of Commissioners Chairman Harry Johnston says there is nobody who did more for the Cherokee County Regional Airport than Don Stevens. 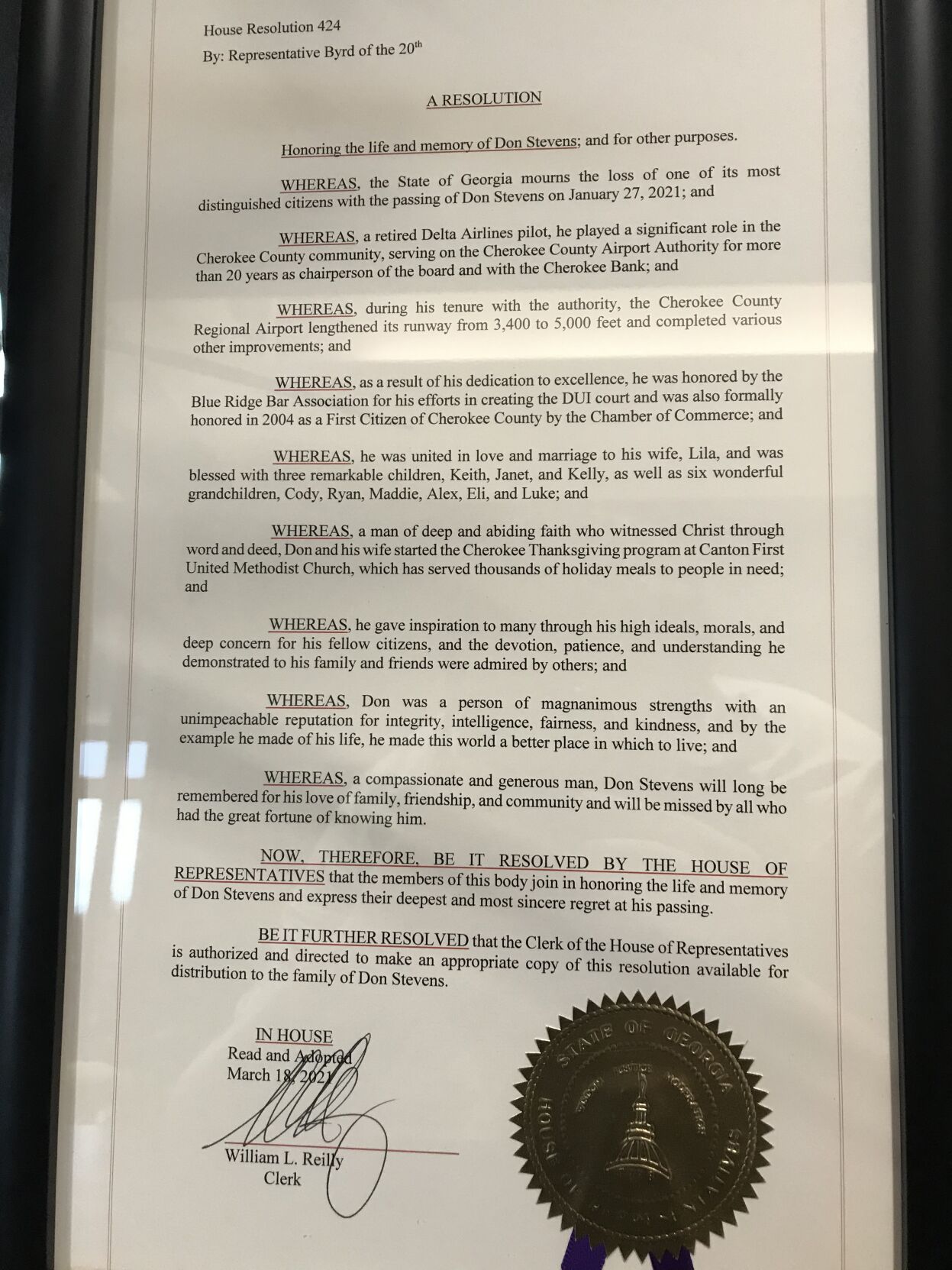 A copy of House Resolution 424, sponsored by State Rep. Charlice Byrd, was on display following the ceremony. 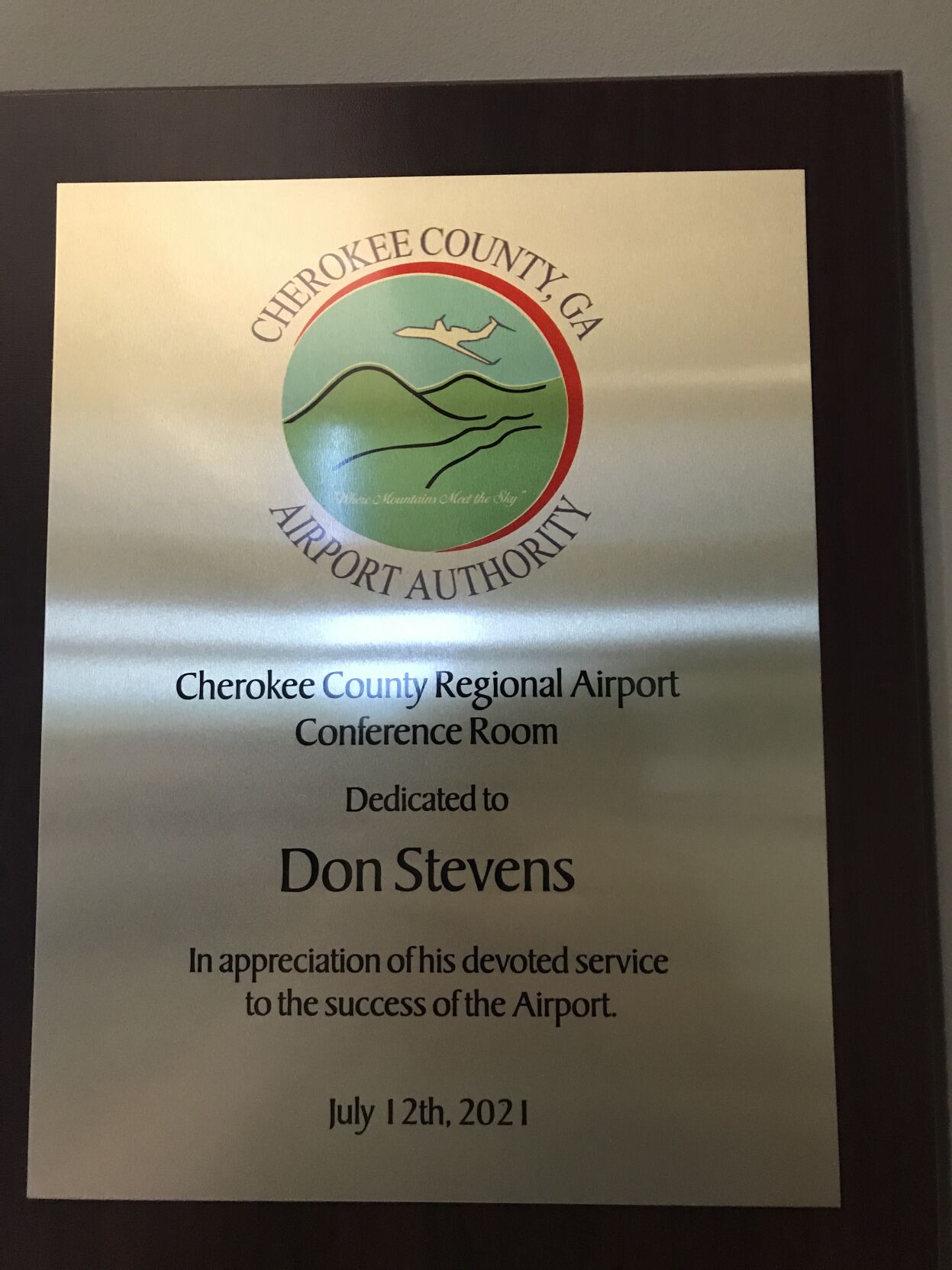 A plaque hanging outside the conference room at the Cherokee County Regional Airport explains the room has been dedicated to the memory of former airport authority chairman Don Stevens. 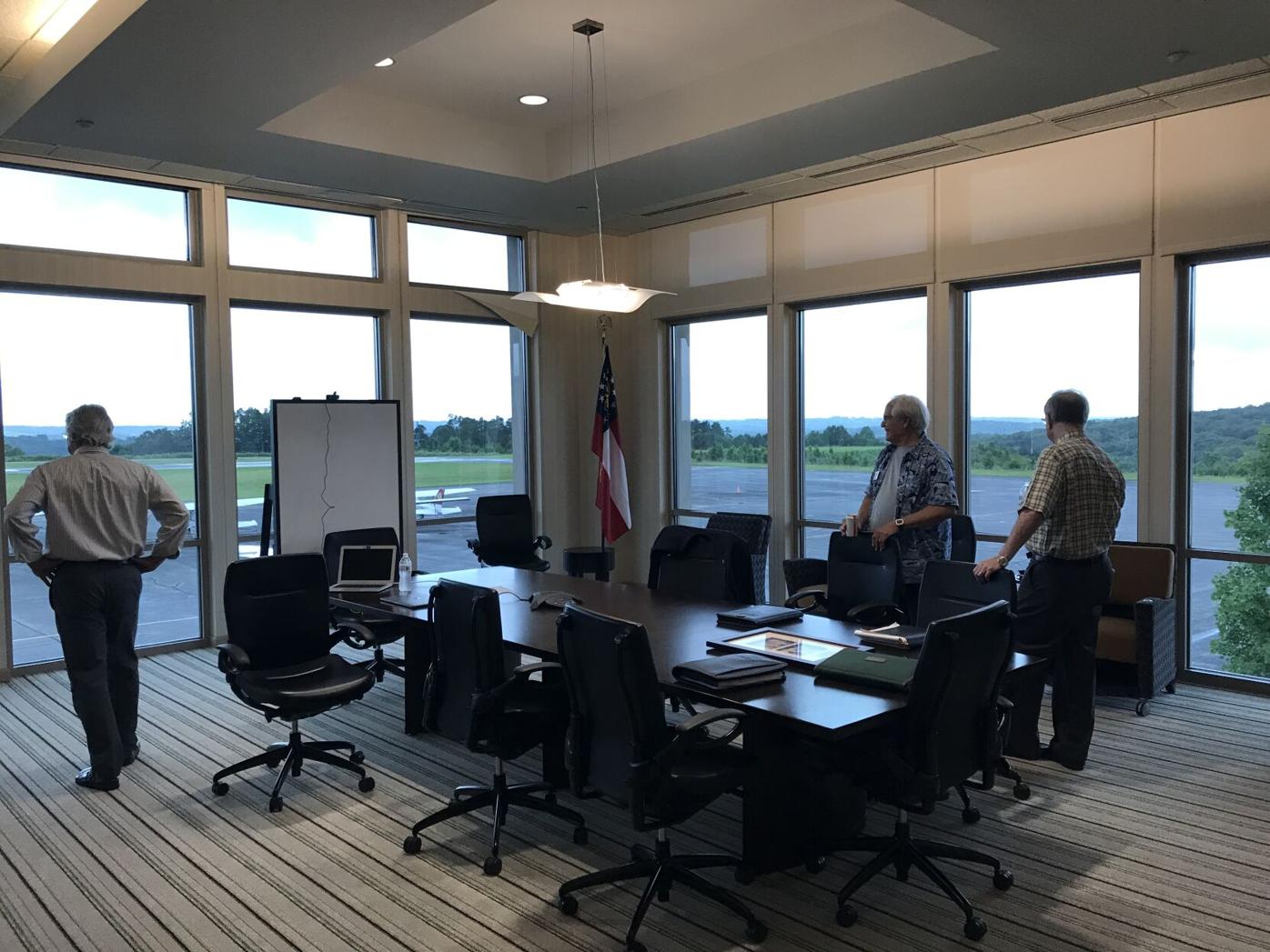 Cherokee County Board of Commissioners Chairman Harry Johnston says there is nobody who did more for the Cherokee County Regional Airport than Don Stevens.

A copy of House Resolution 424, sponsored by State Rep. Charlice Byrd, was on display following the ceremony.

A plaque hanging outside the conference room at the Cherokee County Regional Airport explains the room has been dedicated to the memory of former airport authority chairman Don Stevens.

Stevens died in January after a brief illness, the Tribune previously reported. He is remembered as a longtime community leader; he chaired the Cherokee County Water and Sewerage Authority and the board of the Cherokee County Chamber of Commerce, and was named the chamber’s First Citizen in 2004. He and his wife started Canton First United Methodist Church’s Cherokee Thanksgiving program, and helped create the county’s DUI Court. He was also a volunteer firefighter.

During the ceremony, the airport authority officially dedicated the terminal’s conference room in Stevens’ memory.

With the help of some of Stevens’ family, CCAA Chairman Steve Mammen unveiled the plaque hanging next to the conference room door, honoring a man who dedicated himself to making the airport the best it could possibly be.

“When he died, the county lost one of its finest citizens,” Mammen said. “His contributions will be a part of Cherokee County history forever.”

State Rep. Charlice Byrd, R-Woodstock, was on hand to present a copy of House Resolution 424, which she sponsored in the Georgia House of Representatives in Stevens’ honor during the most recent legislative term, to his widow Lila Stevens. Byrd described Don Stevens as one of her dearest friends, a man who brought laughter, joy and sunshine to everyone, and someone who was always willing to give his time and energy to a multitude of different causes.

“Don Stevens was very special to me,” Byrd said. “It meant the world to be able to do this for him.”

Cherokee County Board of Commissioners Chairman Harry Johnston said the airport is a tremendous asset for the county, and nobody had more to do with making the airport into what it is than Don Stevens.

Following the ceremony, Lila Stevens said it was overwhelming to her to see so many people turn out to recognize her late husband and pay tribute to his hard work and dedication to help shape Cherokee County into what it has become.

A man from Canton was arrested Friday after police say he distributed an explicit image of a child on a popular social media app.

The Cherokee County Board of Commissioners has formally voiced its opposition to a potential land annexation in Canton, and is seeking help fr…

Cities in Cherokee County have set or will soon set qualifying dates and times for the Nov. 2 municipal elections.

Sullivan appointed to regional advisory board

Twenty one Georgia Urology doctors, including six who practice in Cherokee County, were recently named among Atlanta’s Top Doctors by Castle C…

The Woodstock City Council is weighing regulations for party bicycles and pedal pubs, as a business owner is hoping to set up shop for one in …