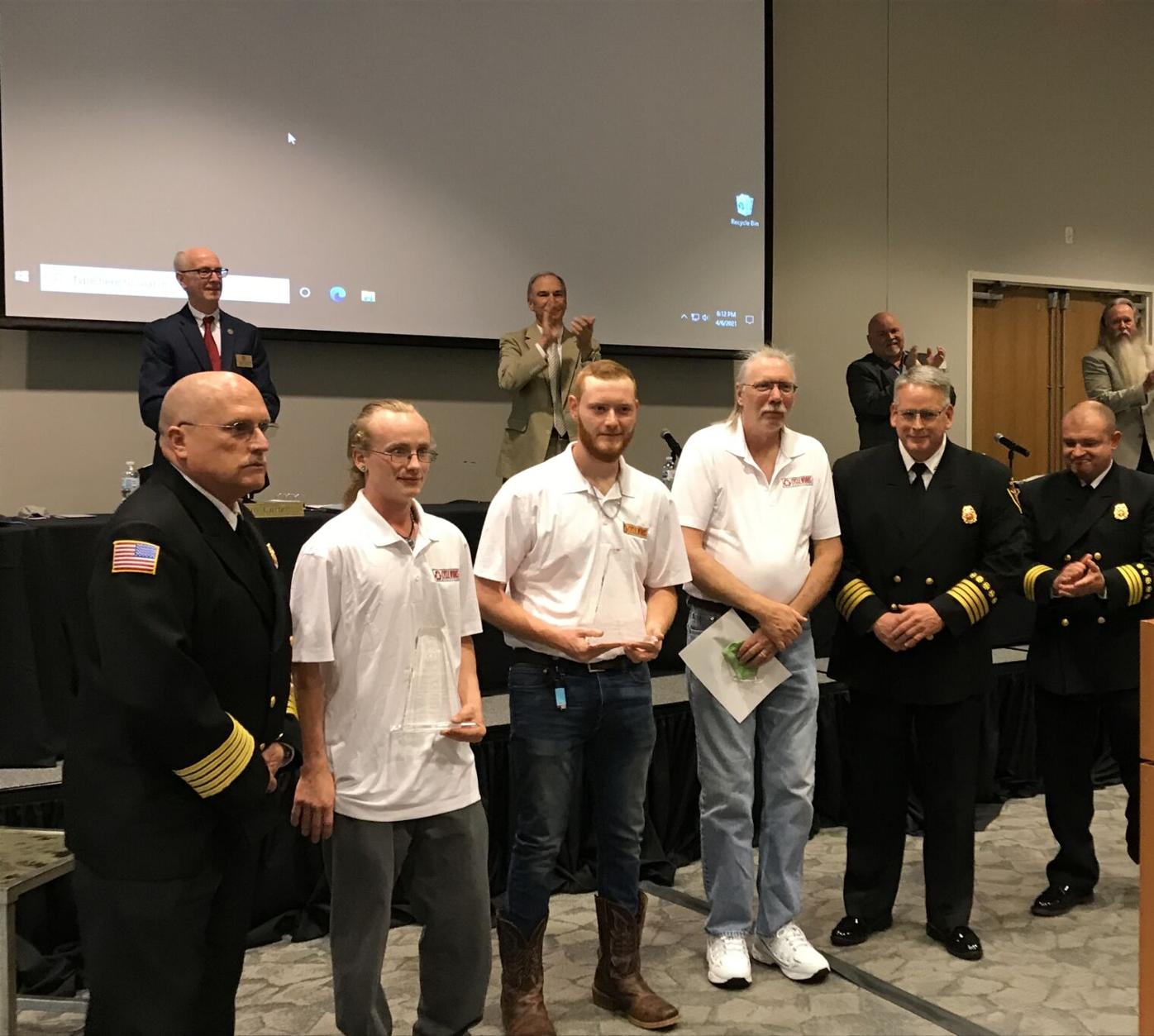 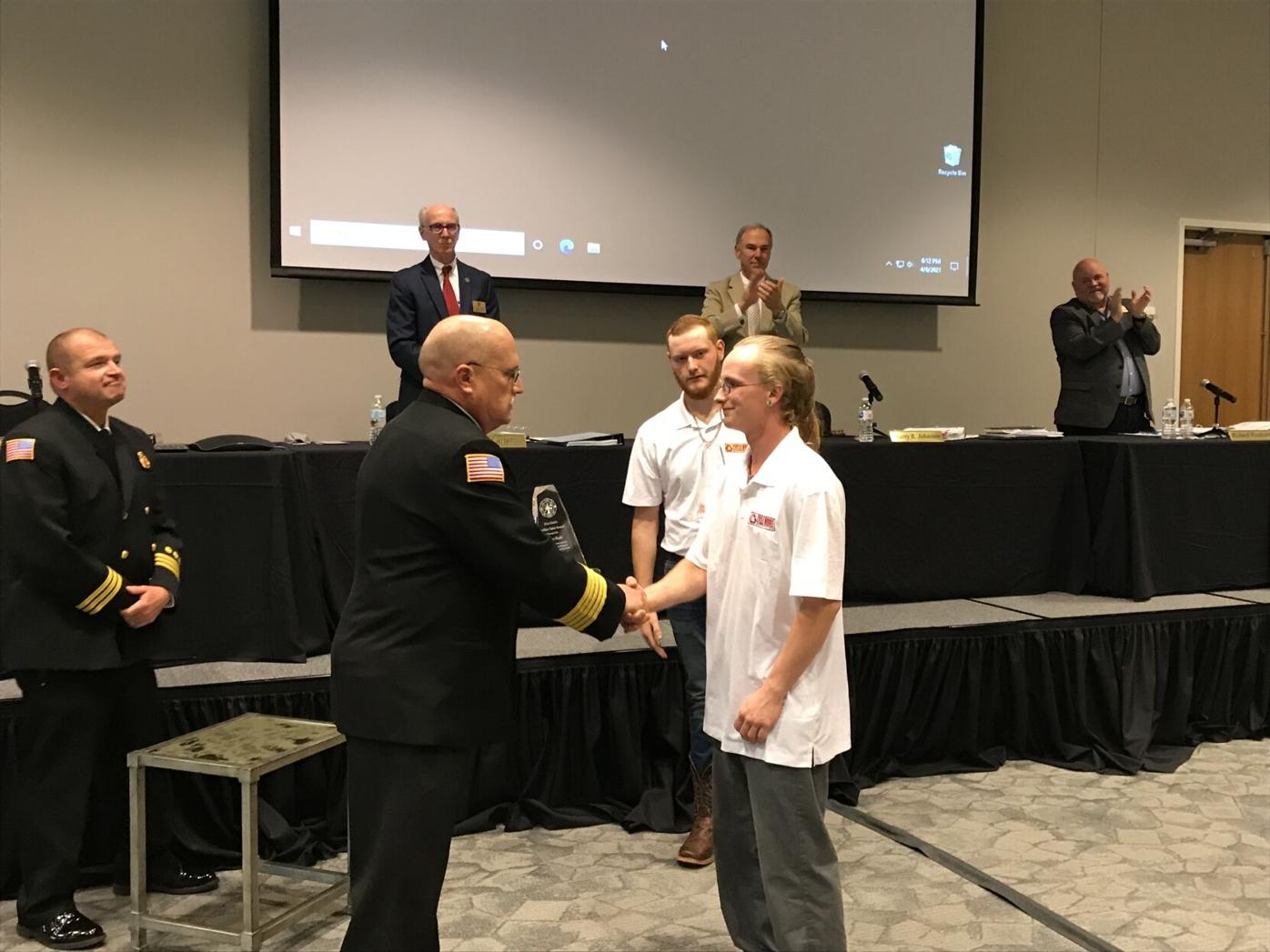 Cherokee County Fire Chief Tim Prather presents Tristan Bush with a Civilian Valor Award for his efforts to save an individual from a March 4 house fire. 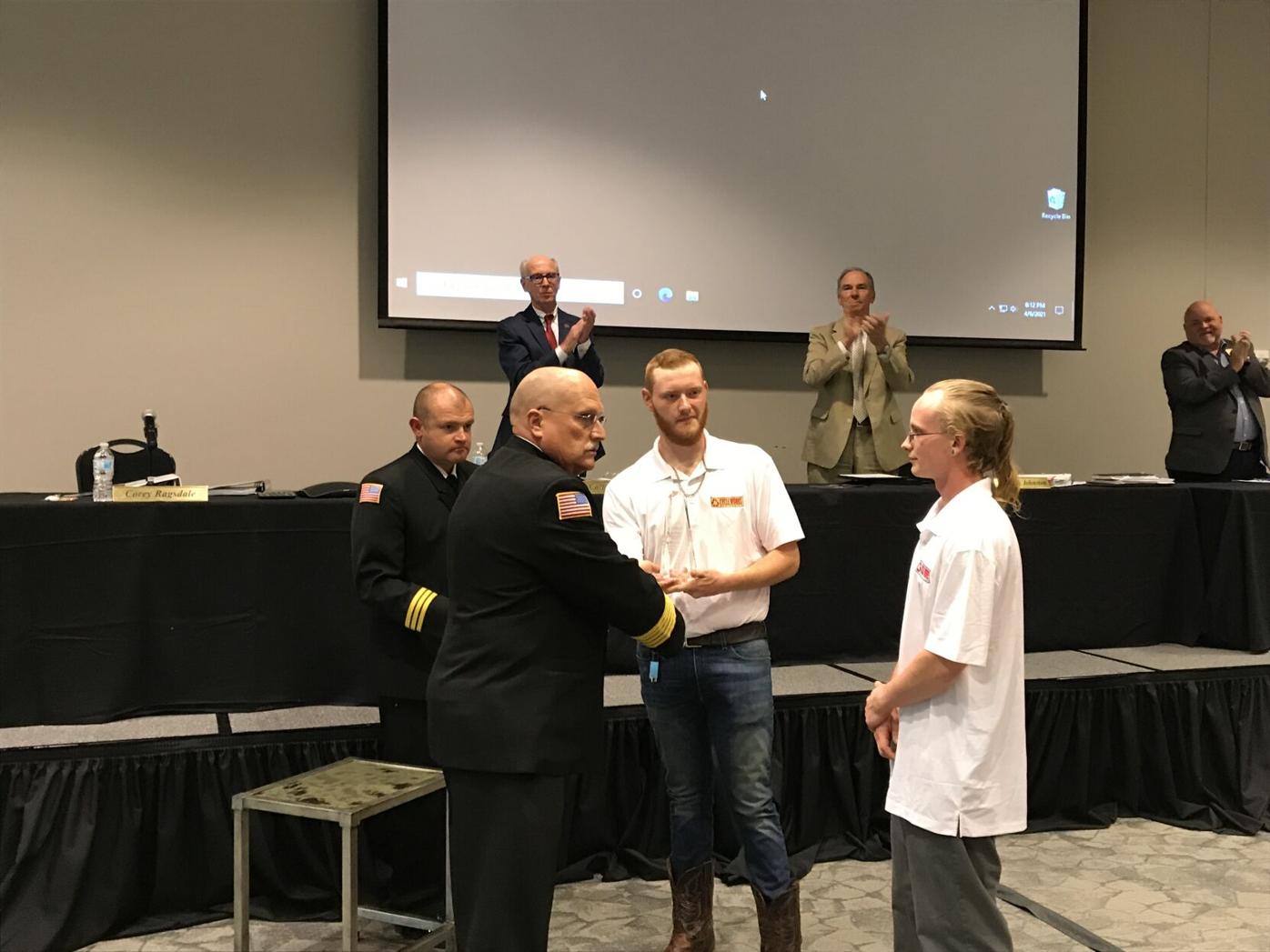 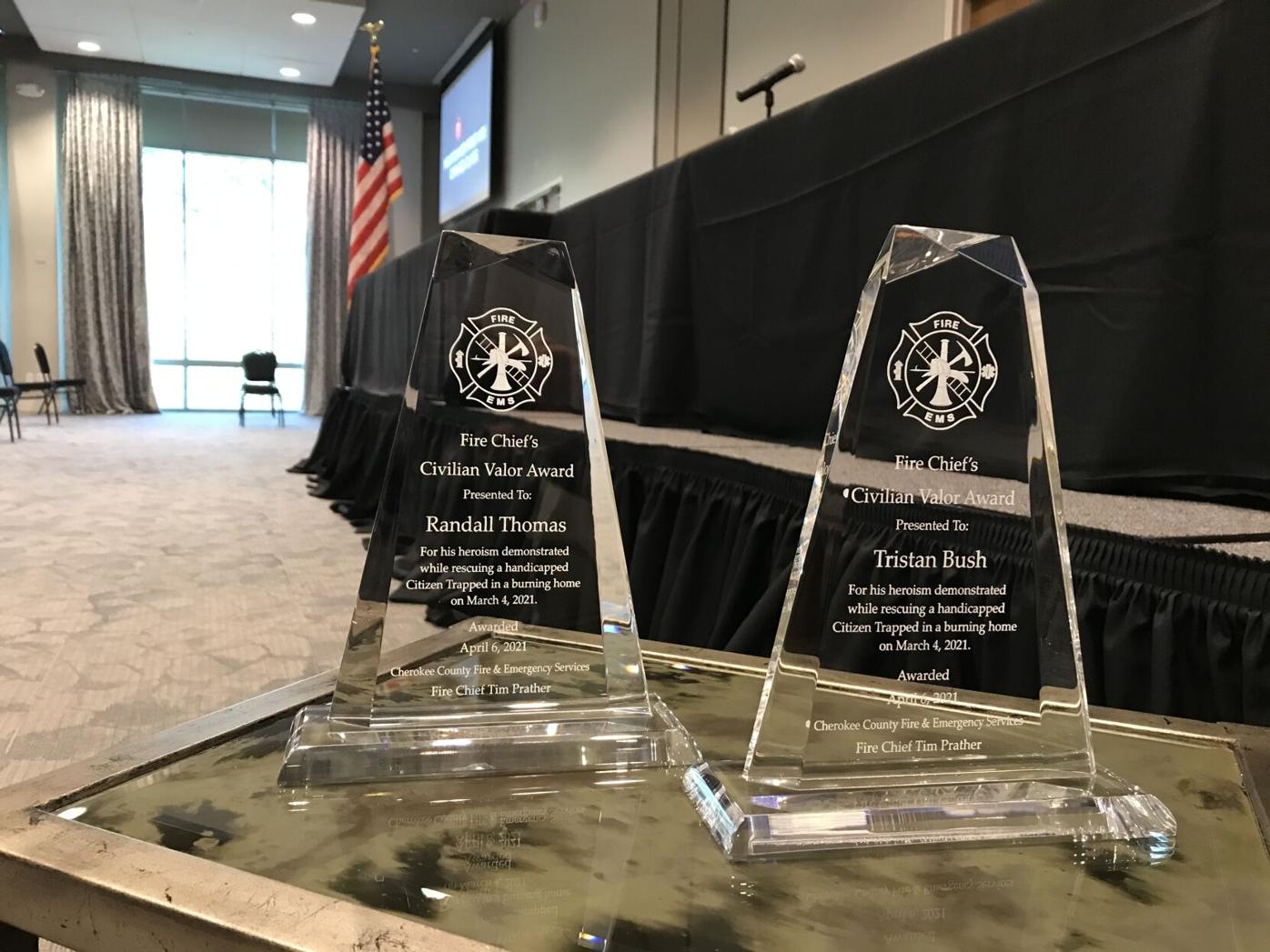 Tristan Bush and Randall Thomas were honored with Civilian Valor Awards from Cherokee County Fire and Emergency Services for their efforts to save the life of a county resident during a March 4 house fire.

Cherokee County Fire Chief Tim Prather presents Tristan Bush with a Civilian Valor Award for his efforts to save an individual from a March 4 house fire.

Tristan Bush and Randall Thomas were honored with Civilian Valor Awards from Cherokee County Fire and Emergency Services for their efforts to save the life of a county resident during a March 4 house fire.

Cherokee County Fire and Emergency Services honored a pair of citizens with the Fire Chief’s Civilian Valor Award Tuesday, crediting them with saving someone from a burning home.

Randall Thomas and Tristan Bush, employees of Cycle Works Sanitation, were recognized for their role in helping save the life of a Cherokee County resident during a house fire March 4. Bush and Thomas, along with co-worker Mark Ogle, received a standing ovation from everyone in attendance.

“We want to honor and celebrate a victory as a result of a heroic act by a couple of our citizens,” Assistant Fire Chief Eddie Robinson said at Tuesday’s county board of commissioners meeting.

On the morning of March 4, Thomas, Bush and Ogle were collecting waste on Hollow Drive near Woodstock when Bush heard a woman shouting that her house was on fire, according to the fire department. Bush had Ogle, who was driving the waste collection vehicle, call 911, while Bush and Thomas made their way to the split-level house and entered it in an effort to help the two residents. They ordered the female resident, who had gone back inside, to get out of the house, and at the top of the stairs, Thomas and Bush located the male resident, who was unable to find his wheelchair and get out.

“The two of them, one on the legs and one on the arms, assisted the occupant that was wheelchair bound out and into the front yard,” Robinson said. “These two guys did something that firefighters do routinely. The difference is, firefighters are highly trained and they’re well-equipped to handle these types of very hazardous situations. These two gentlemen are not.”

For putting their own lives at risk by entering the burning structure to rescue the male resident of the home, fire department officials felt they were highly deserving of the Civilian Valor Award. Ogle was also called forward to be recognized for calling 911.

“Thank you local heroes. It means a lot when we see somebody put themselves in that position to save somebody,” Cherokee County Commission Chairman Harry Johnston said.

The Hollow Drive fire broke out the same day as another fire that killed a 65-year-old Cherokee County man, and that weekend a 60-year-old woman died in another house fire.

The Canton location of the Cherokee County Health Department will be closed on April 22 and 23 as it prepares to offer more services.

Man sentenced for assault, chasing a man with a gun at a Canton McDonald's

An alleged gang member was sentenced to 15 years in prison last week on charges of an aggravated assault with a stolen firearm, according to t…

State Sen. Bruce Thompson, R-White, has filed a declaration of intent to run for Georgia Labor Commissioner in 2022, he told the Tribune.

Another public art project is in its early stages of development in Canton, on the heels of the ongoing Railroad Street mural project.

Cherokee County suffered a second fire fatality in four days when a woman died after a blaze in her Canton home on Sunday.

In a 180-degree turn from January, the Cherokee County Planning Commission recommended approving the rezoning of land on Knox Bridge Highway f…

A project to update streets in downtown Woodstock is getting closer to starting, with the Woodstock City Council approving allowing a company …