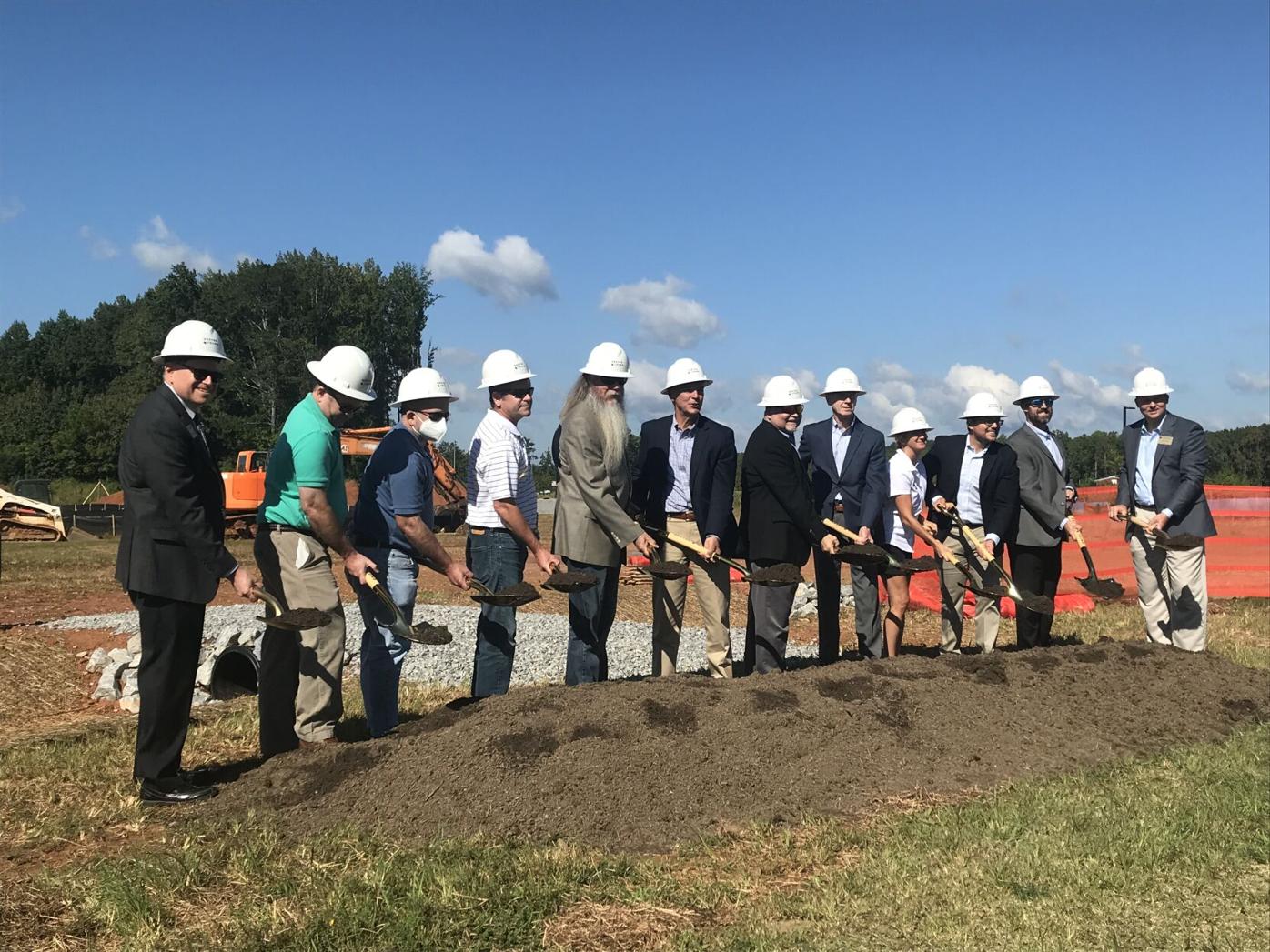 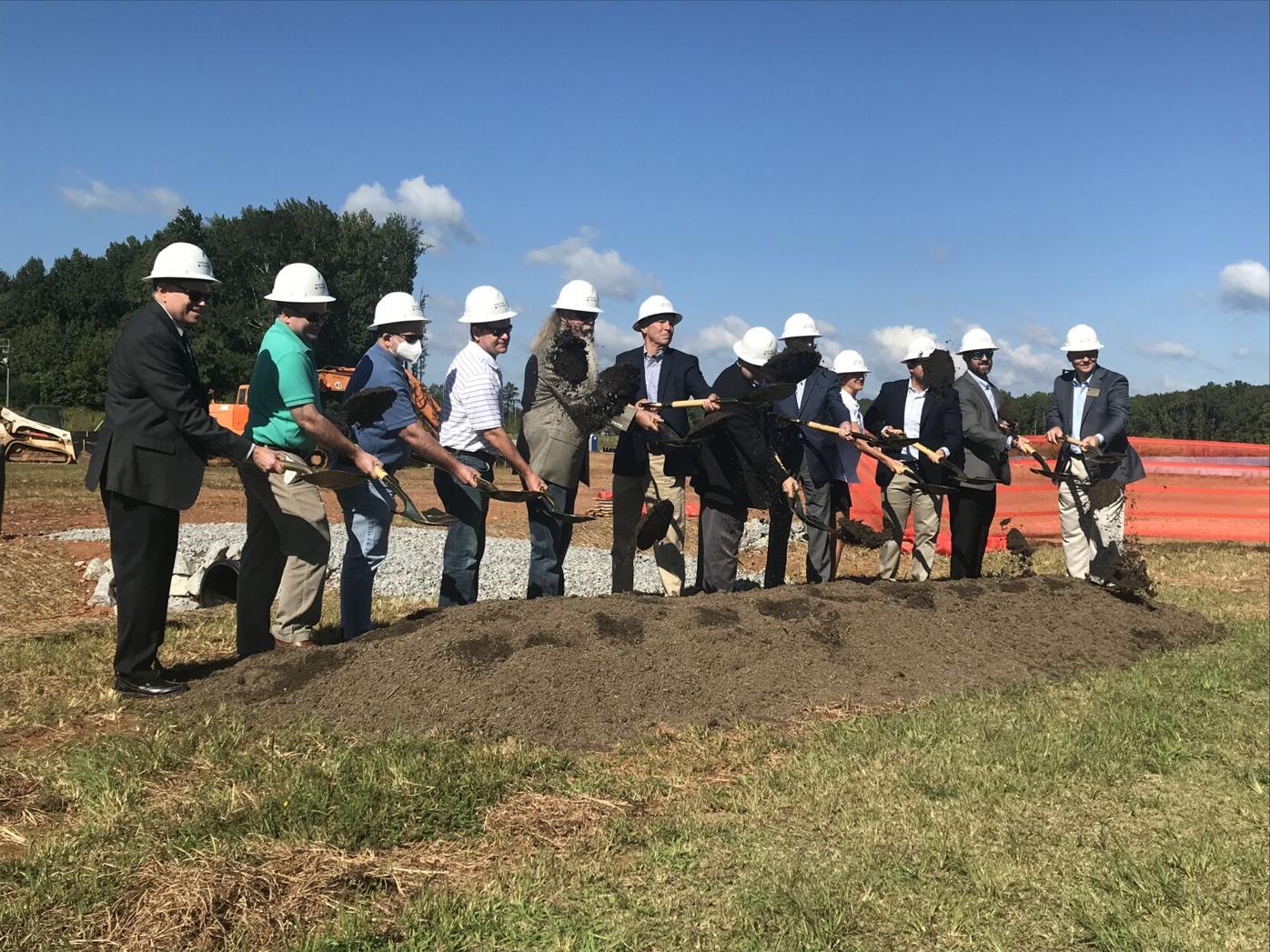 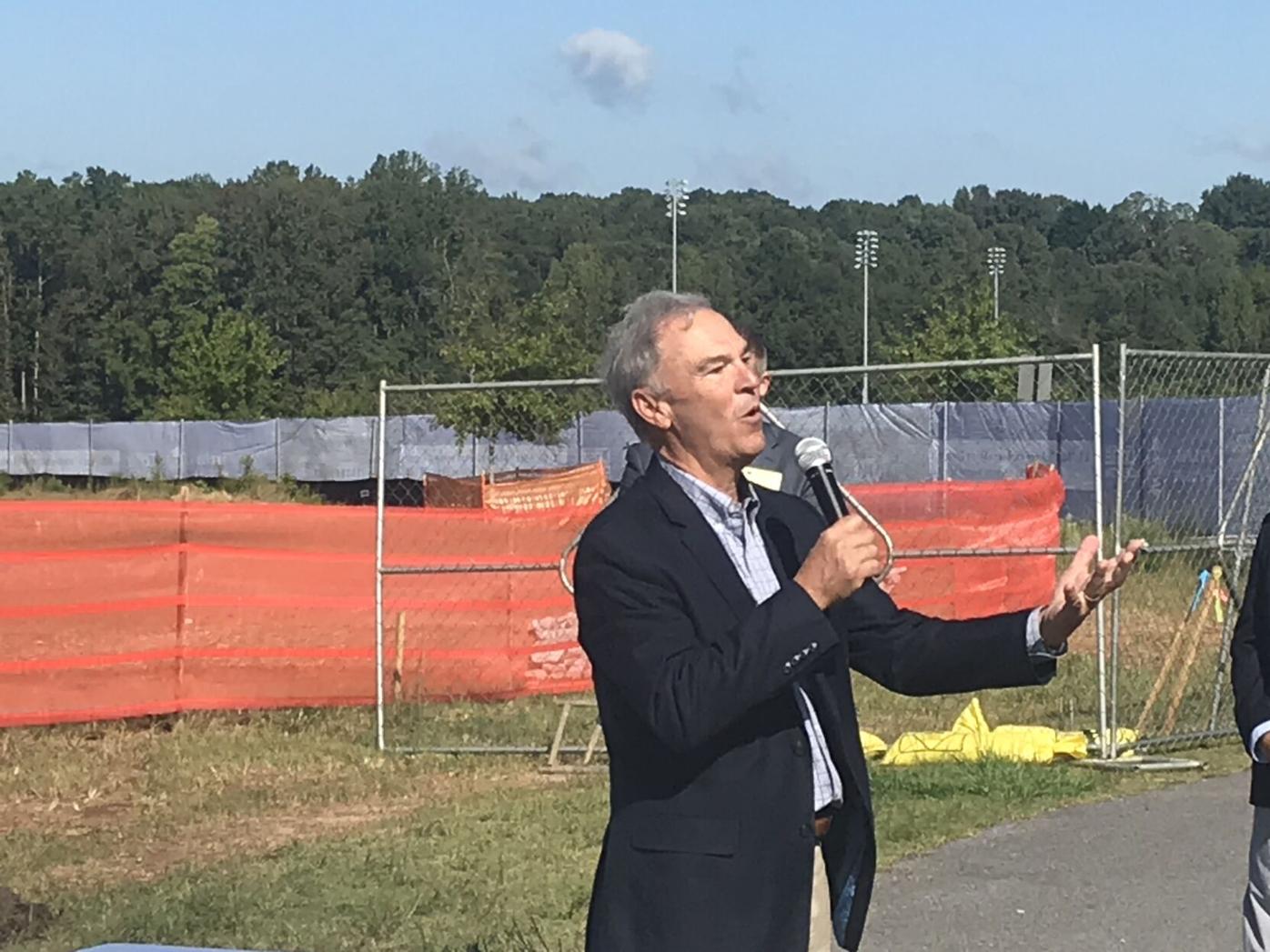 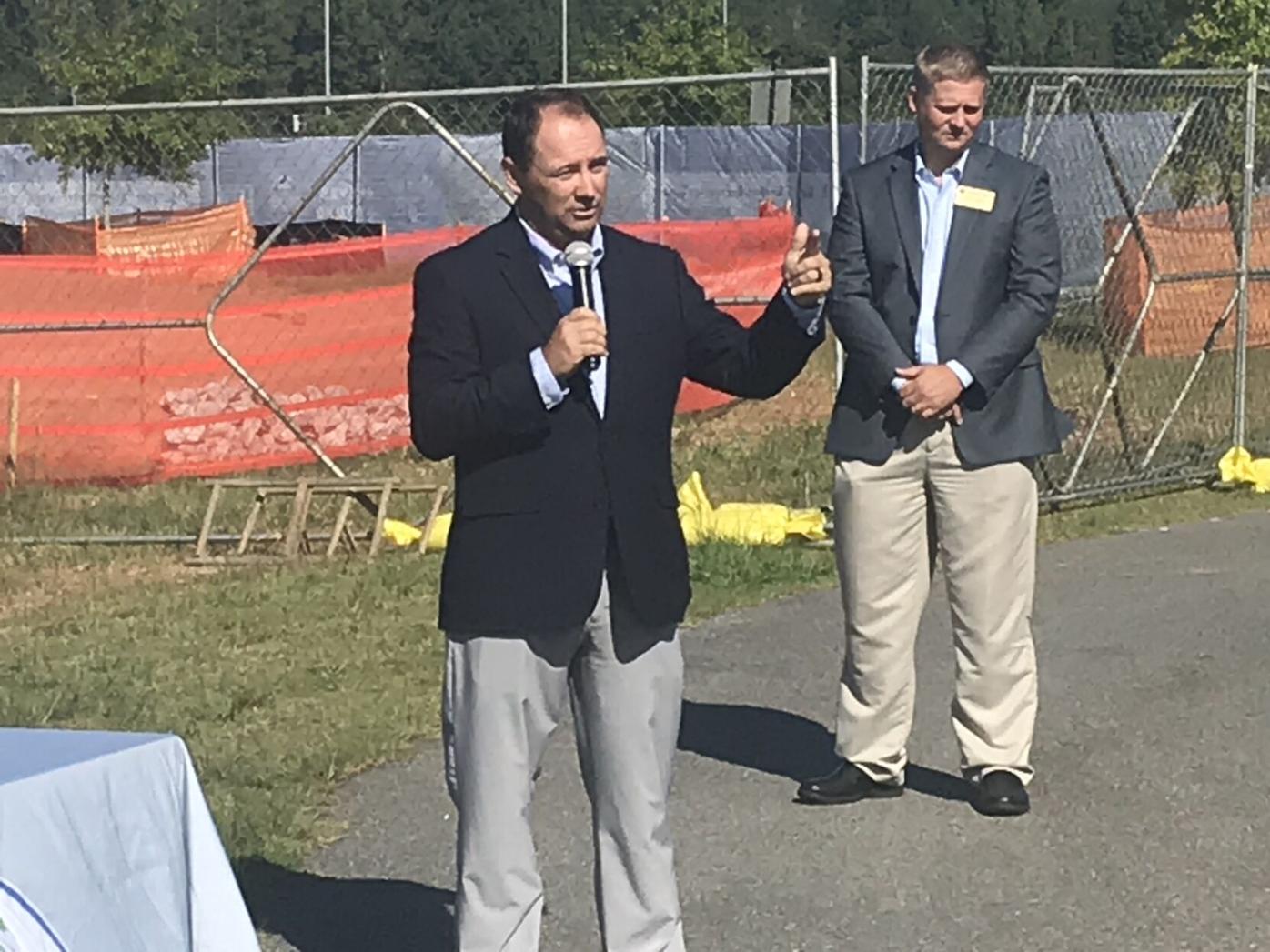 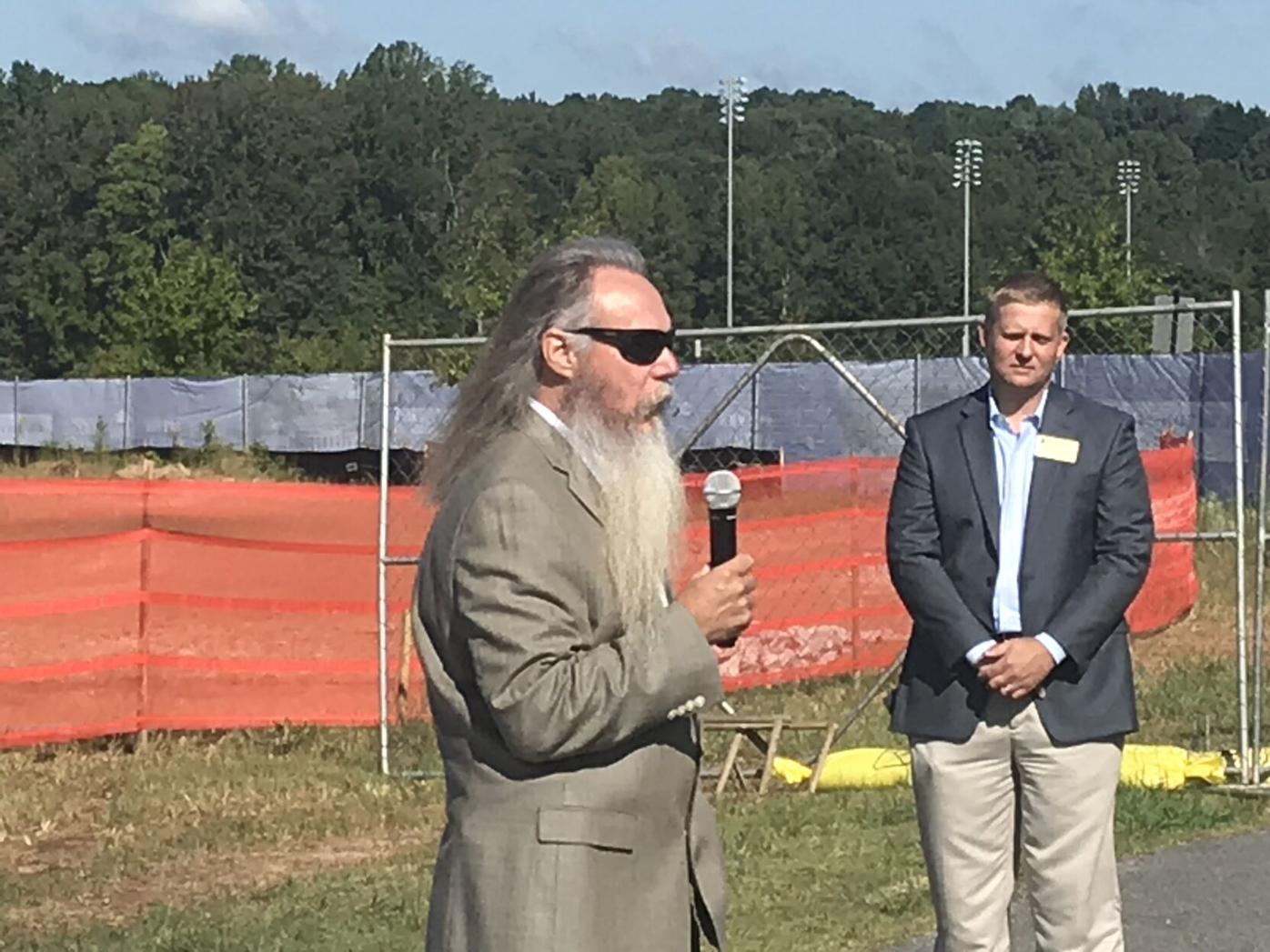 District 1 Commissioner Steve West, who represents the area Cherokee Veterans Park is located in, offers a few comments during the ceremony. 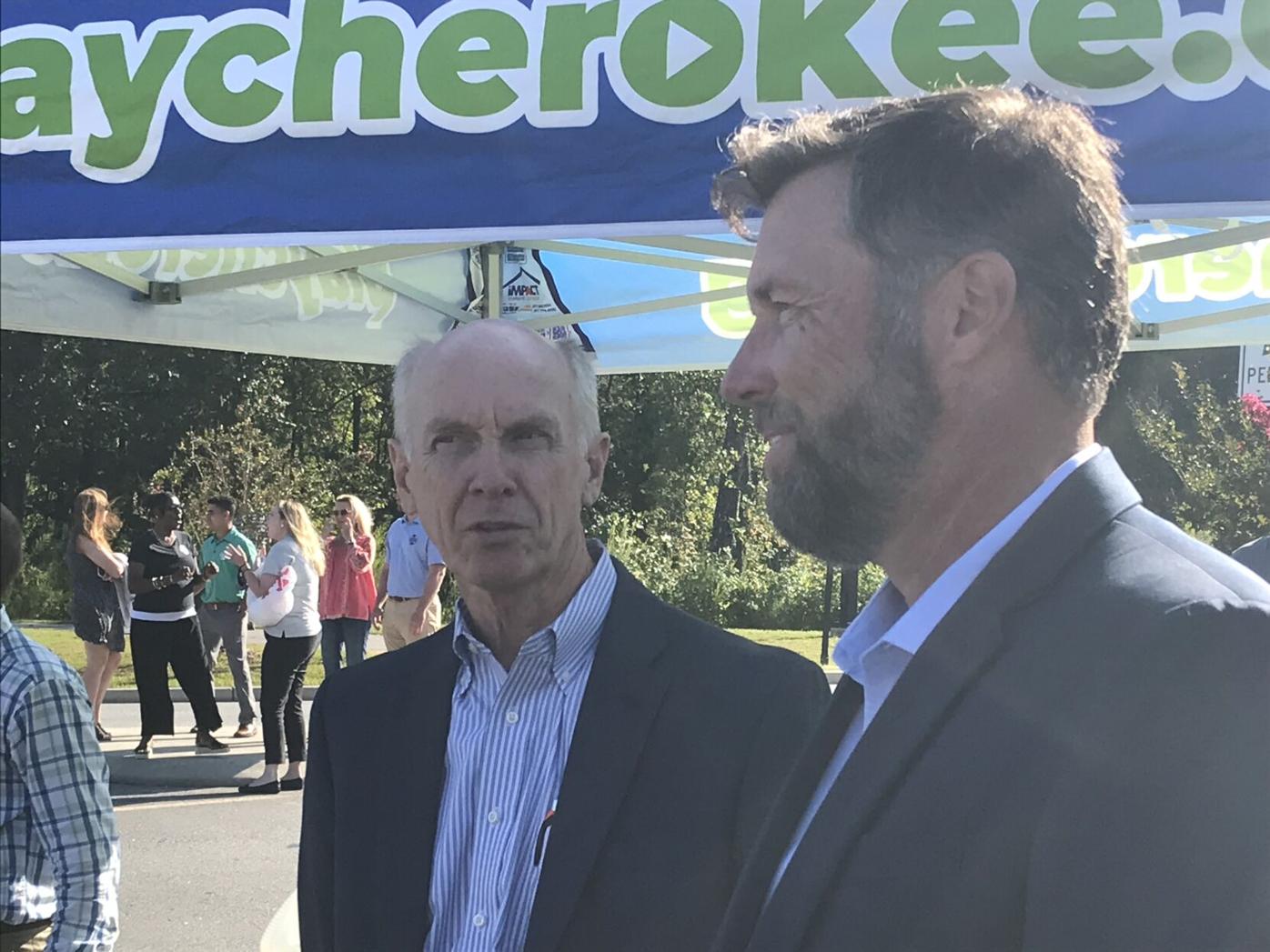 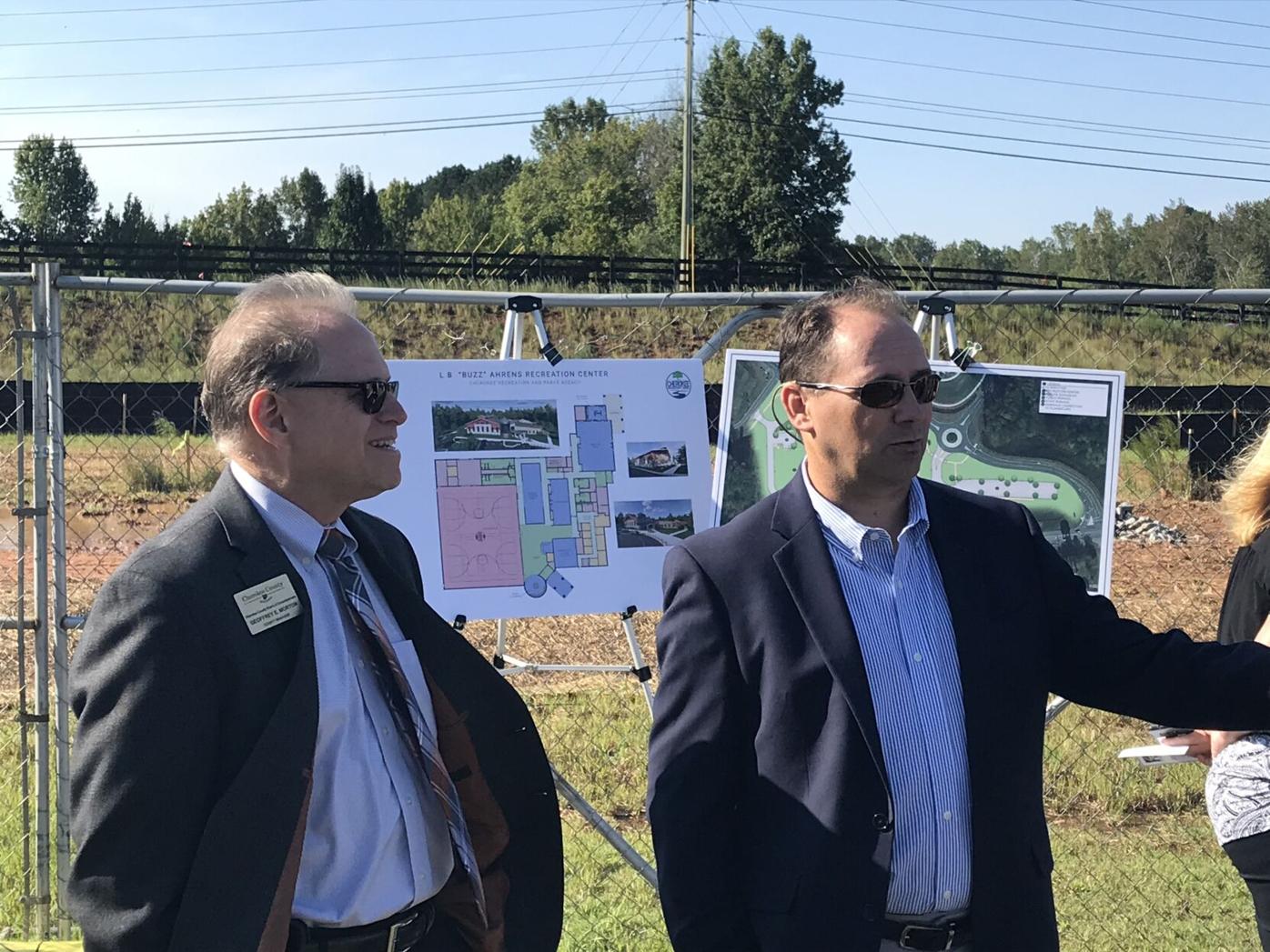 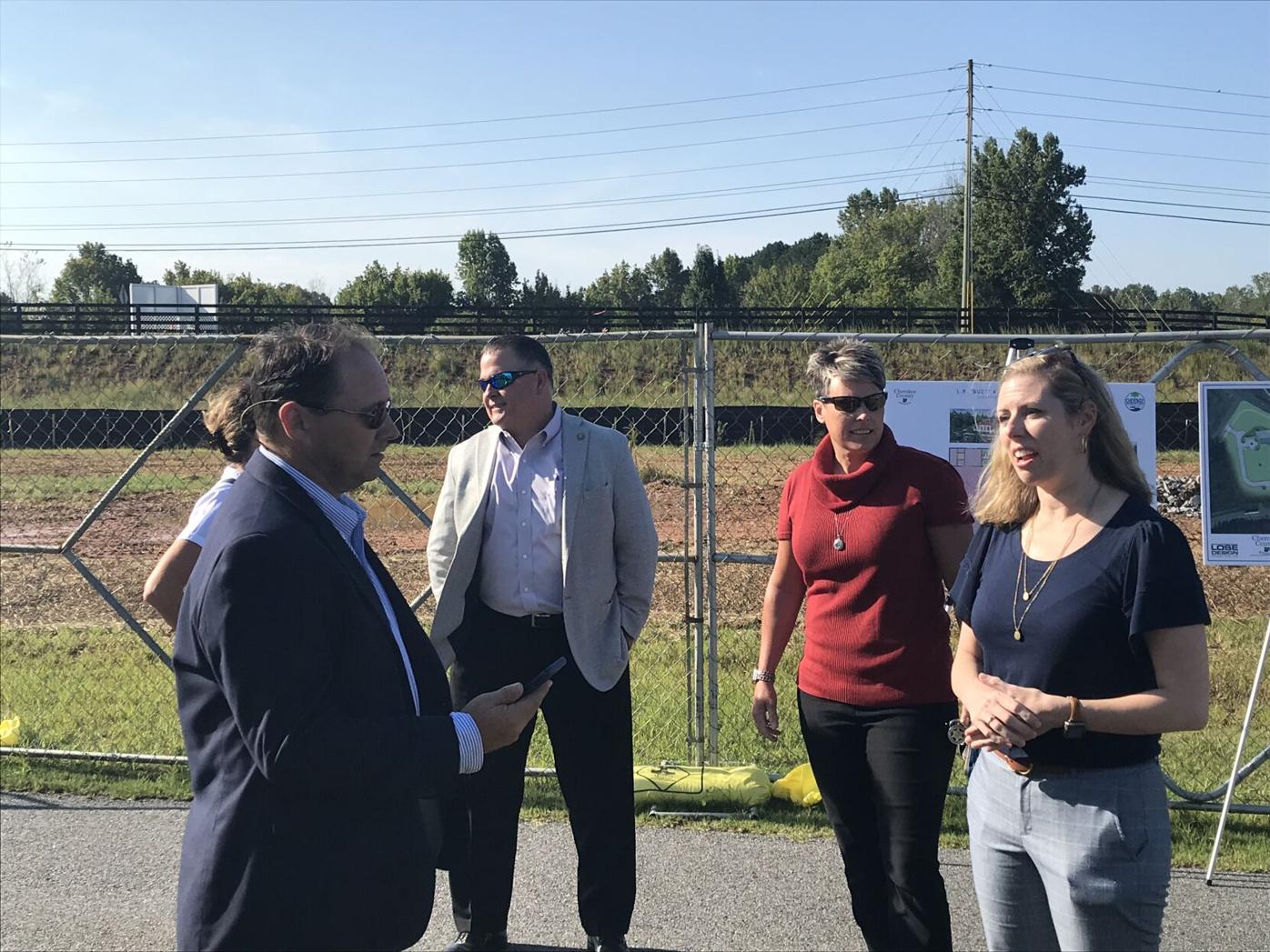 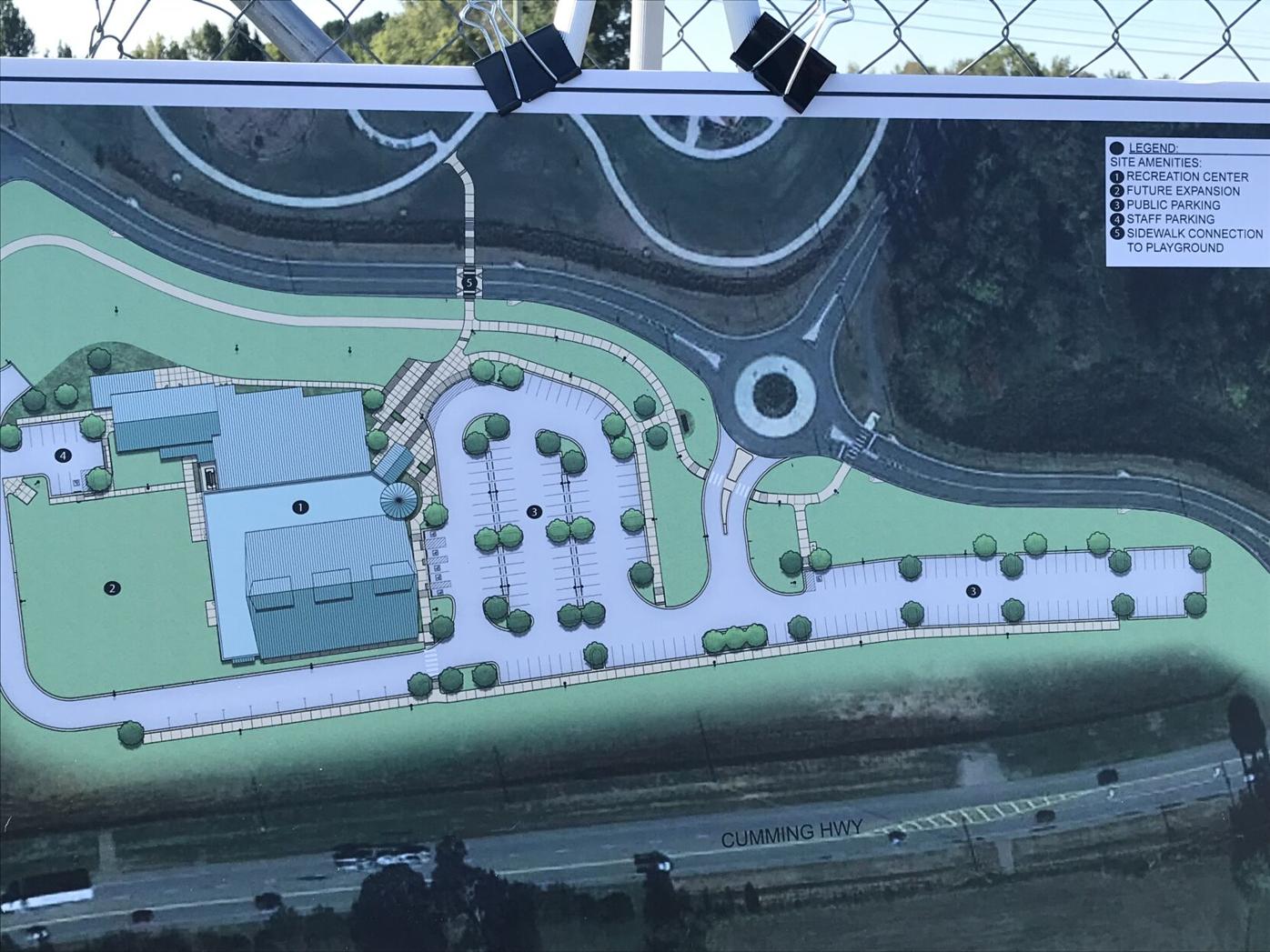 One of the renderings on display shows how "The Buzz" would fit into the space at the front of Cherokee Veterans Park. 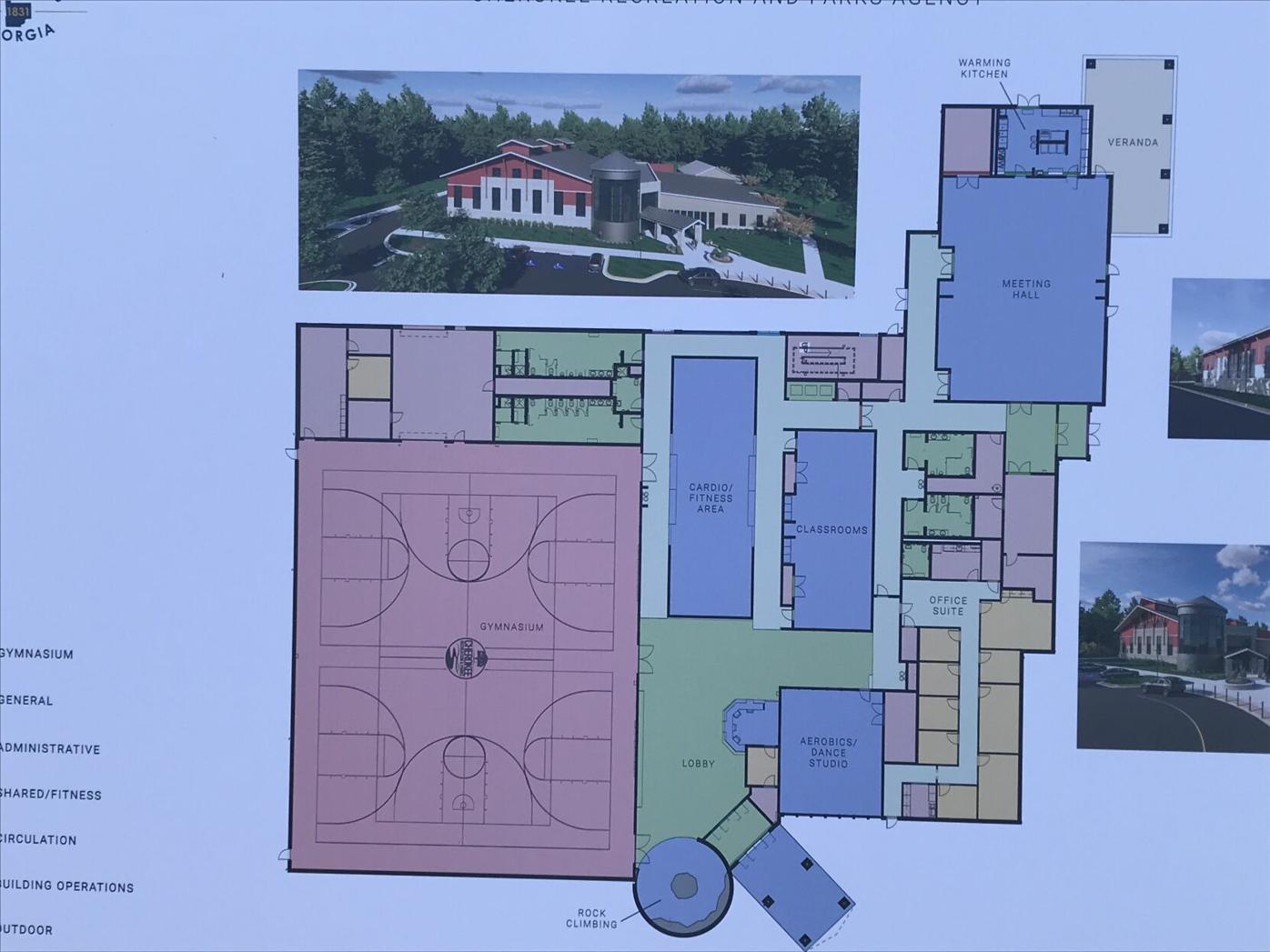 One of the renderings on display at the ceremony detailed how the rec center would be laid out, with gym space, a fitness area, a rock climbing wall, an aerobics and dance studio, classrooms, office space for CRPA officials and a meeting hall with kitchen.

District 1 Commissioner Steve West, who represents the area Cherokee Veterans Park is located in, offers a few comments during the ceremony.

One of the renderings on display shows how "The Buzz" would fit into the space at the front of Cherokee Veterans Park.

One of the renderings on display at the ceremony detailed how the rec center would be laid out, with gym space, a fitness area, a rock climbing wall, an aerobics and dance studio, classrooms, office space for CRPA officials and a meeting hall with kitchen.

The L.B. “Buzz” Ahrens Recreation Center, nicknamed “The Buzz,” is the latest Cherokee Recreation and Parks Agency project the county has taken on and, once completed, will be the second indoor recreation center for CRPA, in addition to its facility on Main Street near Woodstock.

The recreation center is projected to be about 35,000 square feet and will contain a rock climbing wall, an aerobics and dance studio, an open fitness area and a gymnasium that will contain a full NBA-size basketball court. A large curtain in the gymnasium will allow it to be divided in half, with a youth-size basketball court in each half to allow for a pair of games or practices to be held at the same time. There will also be two classrooms, office space for CRPA officials and a meeting hall area with an attached kitchen to allow for catered events.

In keeping with the more rural area surrounding the park, the rec center will be built to look like a large barn, similar to designs for other buildings in the park.

“We are elated to be in a position to deliver on our promise of building a rec center here,” CRPA Director Jay Worley said after the groundbreaking ceremony. “We’re really excited to have additional gym space for our youth basketball league. We’re also excited for the event center space to cater to the community as a whole.”

Under the current timetable, the rec center is projected to be ready to open on Dec. 1, 2022 and is estimated to cost nearly $10.5 million to build. Worley said the site was ready to go, as many of the typical construction issues, such as removing trees and other similar concerns, had not really been an issue with the area in the park where the rec center would be built.

“What a milestone this is,” Cherokee County Board of Commissioner Chairman Harry Johnston said. “This is both the capstone of the park bond program and the first step in where we go next.”

During the ceremony, county officials recognized the rec center’s namesake, former Commission Chairman L.B. “Buzz” Ahrens. Johnston said team sports are all about learning to work together as a team, similar to what Ahrens did while serving as the board chair. While the commissioners may have come in with their own agendas and goals, Ahrens shaped the board into a team working to make Cherokee County the best it could be.

“I think it’s so fitting to name this for Buzz, to serve as a constant reminder of his leadership,” Johnston said following the ceremony.

Ahrens was not able to attend, but had recorded a few comments for the event, which were played for everyone at the ceremony. In an overview of the rec center’s history, he said county officials determined more parks and recreation space was needed in Cherokee County in the mid-2000s. After voters approved $90 million in parks bonds in 2008, the land that became Cherokee Veterans Park was one of the first parcels purchased to be turned into park space. Although all of the park bond money had been designated for other projects before the rec center could be established, the project moved forward thanks to money collected through the county’s one percent sales tax for capital projects.

When the first shovelfuls of dirt were tossed aside, Worley and Johnston were joined on the line by commissioners Steve West, Benny Carter and Richard Weatherby, County Manager Geoff Morton and Buzz Ahrens’ son Jeff Ahrens.

With the rec center adding more space for practices and games for teams in the county’s youth basketball program, Worley said many of those in the program are excited to know the facility is on the way.

“A lot of the kids in this area are excited to know they might be the one to score the first basket here,” he said.

A group of local charities is looking to redevelop a former school campus in Cherokee County into a shelter for homeless women and children, a…

The city of Canton and Northside Hospital Cherokee are hosting a one-mile walk in downtown Canton Oct. 9 to spread awareness and raise money f…

A Woodstock man has been sentenced to 40 years in prison after he was convicted of sexually assaulting a man entrusted to his care, according …

Representatives from Heron Pond subdivision off Highway 92 in Woodstock visited Cherokee County Fire Station No. 7 Tuesday and gave them a che…

Axe throwing coming to Stars and Strikes in Woodstock

The Stars and Strikes entertainment center in Woodstock will be opening a new axe-throwing attraction in the coming weeks.

A new ordinance to regulate short-term rental units in unincorporated Cherokee County is now in place.