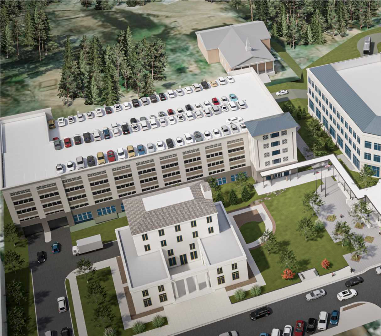 A rendering shows plans for a new parking deck behind the historic courthouse. The parking deck will have 586 parking spaces.

The Cherokee County Board of Commissioners approved a pre-construction agreement Tuesday night for the development of a 586-space parking deck, to be located behind the historic courthouse in downtown Canton.

A rendering shows plans for a new parking deck behind the historic courthouse. The parking deck will have 586 parking spaces.

The Cherokee County Board of Commissioners approved a pre-construction agreement Tuesday night for the development of a 586-space parking deck, to be located behind the historic courthouse in downtown Canton.

The construction of a new parking deck behind the Cherokee County Justice Center in downtown Canton is one step closer to becoming a reality.

The Cherokee County Board of Commissioners unanimously approved an agreement Tuesday with the Gilbane Building Company to conduct pre-construction work on the parking deck, for $28,140.

County Manager Geoff Morton said this was a two-part project, with the first phase being the pre-construction process that was estimated to be completed in November. One this phase is completed, the county would then be able to move forward with the actual construction of the facility, which is estimated to cost around $13 million, Morton said.

Plans for the parking deck show it to be seven stories, with 586 spaces. Six electric vehicle charging stations are included in the plans, while 15 more spaces will be developed behind the deck for the Cherokee County Arts Center. The deck will be free to the public 24/7, county officials said.

At a recent Canton City Council meeting, Mayor Bill Grant and Councilwoman Brooke Schmidt told county officials they were concerned the project would cause the Cherokee Arts Center to be hidden behind the deck. In response, county officials said wayfinding signs would be installed in order to point visitors to both the arts center and the neighboring Riverview Cemetery.

A recent Cherokee High School graduate was awarded a pair of college scholarships from an organization dedicated to supporting women’s education.

The Cherokee County Board of Commissioners have agreed to halt plans for arbitration with the city of Canton about an annexation case, since t…