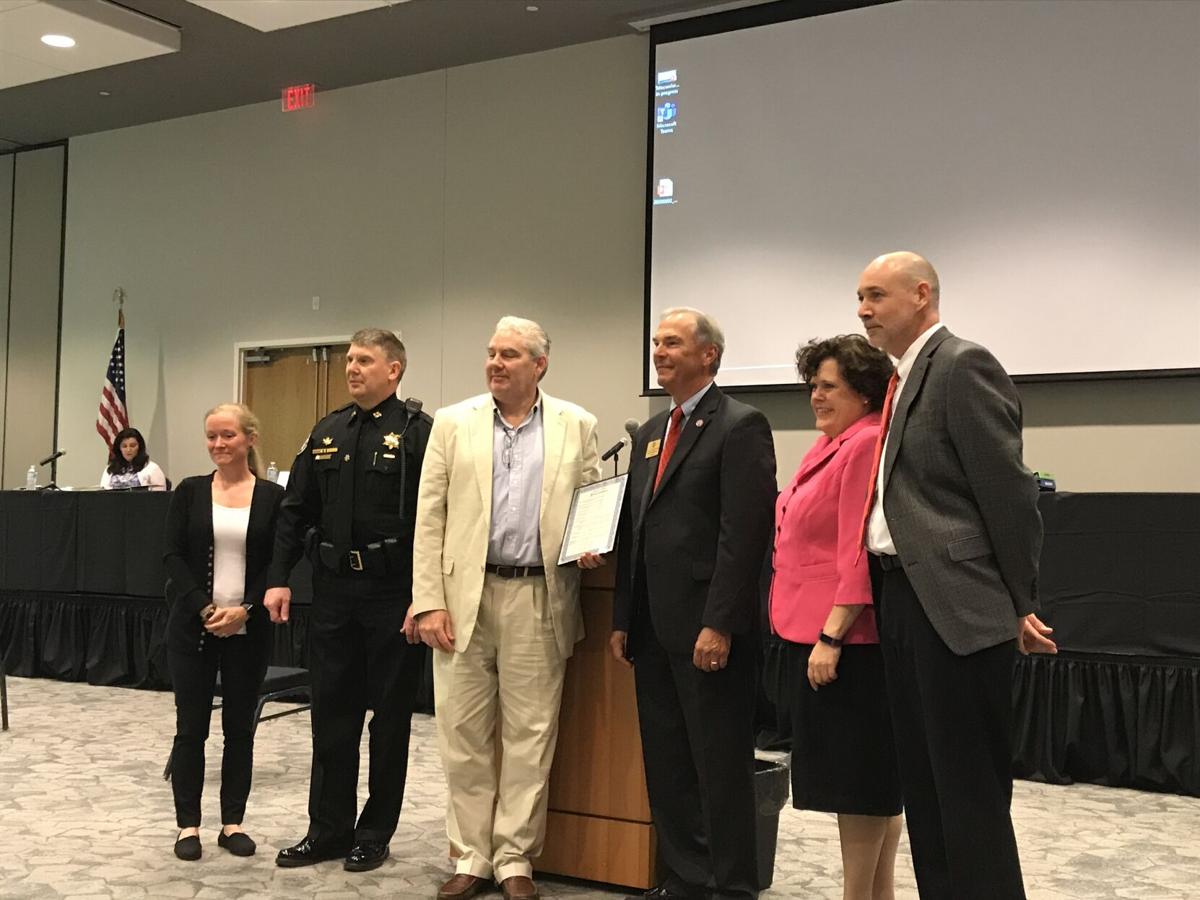 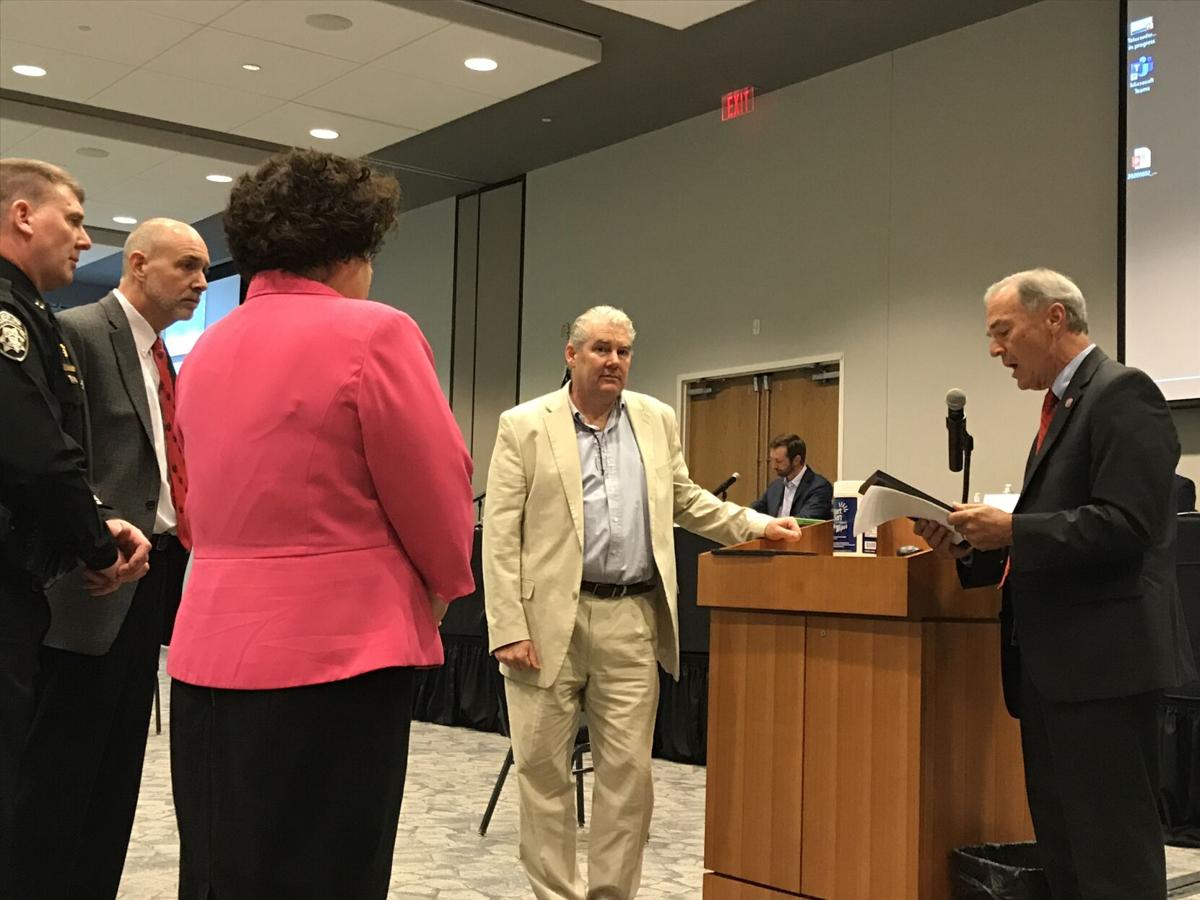 Cherokee County Board of Commissioners Chair Harry Johnston, right, reads out a proclamation recognizing May as National Drug Court Month, as well as recognizing the hard work and dedication of those involved with Cherokee County's drug treatment courts.

Cherokee County Board of Commissioners Chair Harry Johnston, right, reads out a proclamation recognizing May as National Drug Court Month, as well as recognizing the hard work and dedication of those involved with Cherokee County's drug treatment courts.

In its first meeting back in person after two months of teleconference sessions, the Cherokee County Board of Commissioners was busy Tuesday night with a handful of appointments to county boards, a proclamation and a modification to a resolution.

Following a recommendation by the Executive Director of the Sequoyah Regional Library System, the board approved appointing Randy Gravely to the Cherokee County Libraries Board of Trustees for a three-year term beginning July 1. Action was also taken to place three people on the Airport Authority, two of which were reappointments and one being a new member of the board. The commissioners approved reappointing Dick Hall and Robert “Dave” Davis to four-year terms beginning July 1, while Joe Lawrence was approved for a four-year term to fill the vacancy left by David Pitts requesting to not be reappointed.

Since the board did not meet in person during the month of May, the commissioners took a moment Tuesday night to recognize the county’s drug treatment courts and their officials, as May was National Drug Court Month. After Commission Chair Harry Johnston read the proclamation recognizing National Drug Court Month and the positive effects of drug treatment courts, Superior Court Judge David Cannon shared his thoughts on the impact local courts have.

“It’s been my privilege to supervise and preside over the drug accountability court program for the last 18 months,” Cannon said. “It’s probably the most rewarding work I’ve done in my law career, which is saying a lot.”

Although the treatment and accountability court programs in Cherokee County have had to modify their formats as a result of the novel coronavirus pandemic, Cannon said they are still continuing to work, and are perhaps even working harder than ever before to ensure those in the programs are maintaining their sobriety and receiving the care they need.

In March, the board approved a resolution related to establishing a liaison with cities regarding the service delivery strategy issue, naming Bill Wood as the county’s liaison. This resolution was amended Tuesday to replace Wood with Geoffrey Morton. One reason for this was Morton’s being named as deputy county manager, Johnston said. The amendment was then approved in a unanimous vote.

As the county has officially formed a communications division to better share valuable information both with other county officials and members of the public, the board approved a budget amendment for the current fiscal year to fully fund the division. This budget amendment totaled $113,450, with County Manager Jerry Cooper explaining that no increase to the budget would be needed, as the money needed was able to be pulled from other sources.

Jeff Watkins, the county Director of Planning and Zoning, brought forth suggestions regarding community input meetings for various projects and plans. With the county’s fire stations currently closed to the public, meetings typically held in the station’s community room are unable to be held there, and thus the county was seeking alternate meeting spaces. Now that Cherokee Recreation and Parks Agency has reopened a number of its facilities, the community rooms in CRPA facilities will be able to serve as a space for these meetings, with safety protocols and other requirements being in place as well.

The Cherokee County Board of Commissioners also handled the following items:

The next meeting of the Cherokee County Board of Commissioners will be Tuesday, June 16.

The Cherokee Office of Economic Development, with the support of Cherokee County’s cities, has launched a free online tool promoting local bus…

Board of Commissioners takes action on four zoning cases

Wanting to move forward with a project that was suggested earlier in the year, Cherokee County will be hosting a public interest meeting to ge…

Hennessy Honda was full of excitement on June 3 as a local veteran received the gift of a car through the generosity of a number of area individuals.