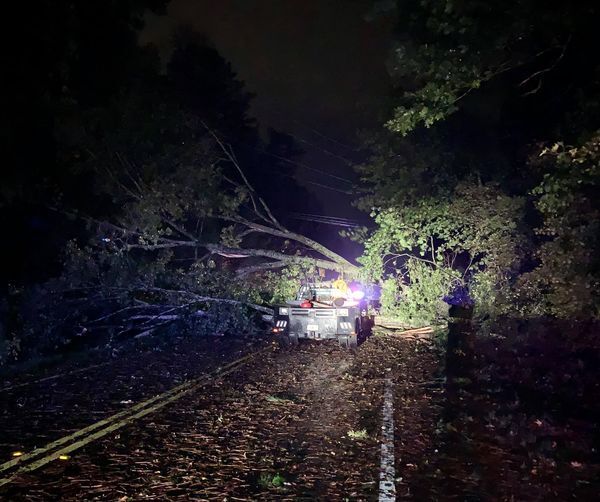 Arnold Mill Road at Mill Creek was closed after a tree fell struck vehicle. There were no injuries. 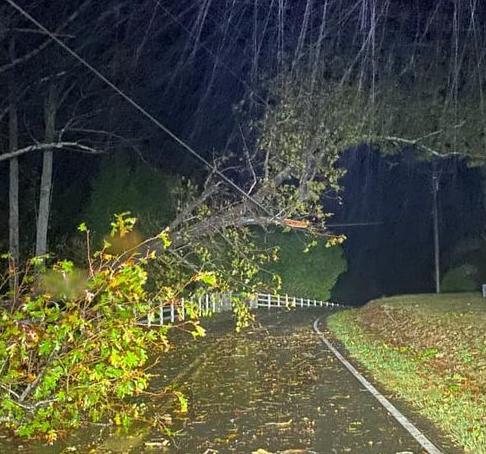 On Darby Road a power line sags under the weight of a tree limb. 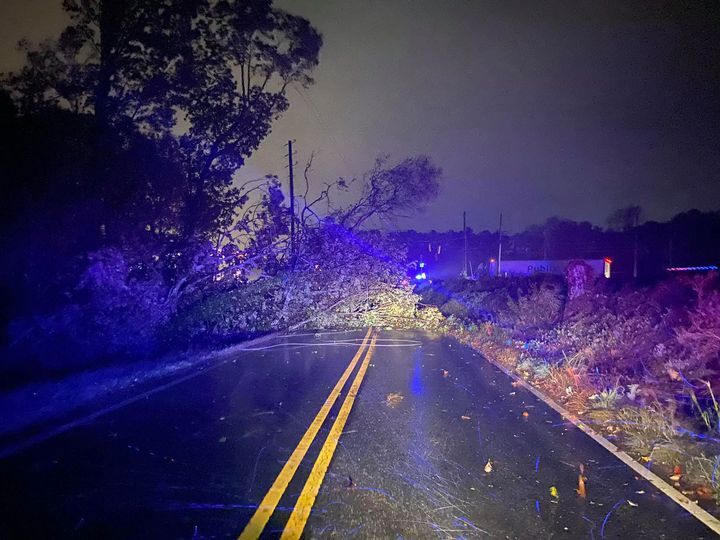 Tropical Storm Zeta brought down a tree across Scott Road.

Arnold Mill Road at Mill Creek was closed after a tree fell struck vehicle. There were no injuries.

On Darby Road a power line sags under the weight of a tree limb.

Tropical Storm Zeta brought down a tree across Scott Road.

UPDATE at 10:41 a.m. - Statement from Cherokee County EMA: Numerous trees and power lines have been downed throughout the county. Additionally, numerous trees have fallen on homes, resulting in extensive damage to these structures. Fire and Law Enforcement units have been responding to calls for service continuously since 4:15 am this morning. Winds should subside as the morning progresses and Tropical Storm Zeta moves away from the area. Currently, sustained winds have fallen to 10-15 mph and wind gusts are averaging 20-25 mph. Conditions should steadily improve through the late morning hours and into this afternoon. Many major and secondary roadways in the county are closed due to fallen trees. Below is a listing of the major roadways currently blocked:

Please remain at home and off the roadways, if possible, until conditions improve later today.

UPDATE at 7:40 a.m. - A man who is a resident of Eastgate mobile home park was killed Thursday morning when "a massive oak tree," fell on his home at about 5:45 a.m., according to Capt. Jay Baker of the Cherokee Sheriff's Office. The park is located at 6310 Bells Ferry Road, Acworth.

No one else was injured. The coroner is on the scene as public safety personnel work to remove the tree, Baker said. The man's identity is not being released at this time.

UPDATE at 7:21 a.m. - Arnold Mill Road at Mill Creek is closed because of a downed tree that struck a vehicle. There were no injuries, according to the Cherokee Sheriff's Office.

UPDATE at 7:11 a.m. - More than 37,000 power customers in Cherokee County are without power. Trees and power lines are down around the county. "Folks stay home for a while until we can get some of this clear up to keep you safe," Cherokee County Fire Chief Tim Prather said in an online statement.

UPDATE at 6:36 a.m. - Cherokee Sheriff's Office reports Bells Ferry Road near Wyngate Parkway is closed because of a tree across the road. Cherokee EMA warns the closure may be lengthy because of the size of the tree.

Woodstock police report power lines down on Main Street at the Haney Road roundabout. Officers urge residents to treat any downed power lines as live and to avoid them.

"The bottom line is don't drive if you don’t have to. It’s not safe," the Sheriff's Office said in a statement.

Woodstock police remind drivers to treat any intersections where traffic lights are not working as a four-way stop.

WSB-TV reports more than 700,000 customers without power across Georgia.

UPDATE at 5:28 a.m. - Cherokee Sheriff's Office reports Knox Bridge Highway is closed because of downed trees in the S curves. Avoid the area if possible.

UPDATE at 5:22 a.m. - Cherokee EMA reports 25,000 customers without power. Cherokee Sheriff's Office urges residents to stay off the roads during the storm if possible.

Numerous trees and power lines have been downed throughout the county as of 5 a.m. Wind gusts at the Cherokee County EOC and Cherokee County Airport have ranged between 35-40 mph. However, higher winds gusts of 50-60 mph will be possible over the next two hours as Tropical Storm Zeta moves to the north of Cherokee County. Additional rainfall amounts of 1 (one) inch will also be possible. Conditions should improve after 10 a.m. as the Tropical Storm moves away from the state. Approximately 7,500 customers are without power in Cherokee County.

Meteorologists report that the speed of the storm means winds and rain should decrease after 8 a.m.

The current forecast from the National Weather Service:

Tropical storm conditions likely. A wind blown steady rain this morning. Showers continuing this afternoon. High around 75. Southwest winds at 25 to 40 mph, decreasing to 10 to 15 mph. Chance of rain 100%. Rainfall near a half an inch.