"Turtle Man," created by 6-year old Graham Johns, is a key inspiration for the creation of the comic books that help benefit turtle conservation. 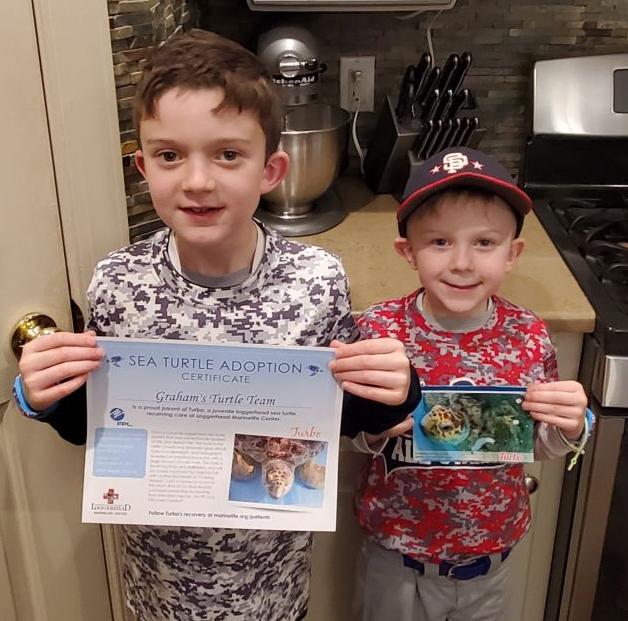 The boys had a joint birthday party and accepted donations in lieu of gifts to raise money to open their non-profit. They made over what they needed and also had 50 comics printed.

"Turtle Man," created by 6-year old Graham Johns, is a key inspiration for the creation of the comic books that help benefit turtle conservation.

The boys had a joint birthday party and accepted donations in lieu of gifts to raise money to open their non-profit. They made over what they needed and also had 50 comics printed.

A pair of young Woodstock brothers have used their imaginations and drawing ability to create a way to help rehabilitate injured marine turtles.

Graham’s Turtle Team is a non-profit organization that was founded by the Johns family of Woodstock, more specifically, 6-year old Graham and 9-year old Daniel.

The organization, which was formed in January, focuses on helping, educating and supporting turtles and their habitats, as well as supporting research leading to environmental preservation. The brothers created a comic book to help raise money.

“Right now, our focus is on conservation and education,” said Graham and Daniel’s mother, Aurora Johns.

Graham’s Turtle Team came to fruition thanks to the unselfishness of both Graham and Daniel.

“The boys had a joint birthday party and accepted donations in lieu of gifts to raise money to open their non-profit,” Aurora said. “They made over what they needed and also had 50 comics printed.”

The money made through donations and comics sales in January allowed the boys to adopt a turtle from Loggerhead Marinelife Center in Juno Beach, Fla. The turtle, Turbo, was brought in to the center because it had a fishing hook in its mouth, was underweight and had an intestinal impaction with a large amount of crab shells.

The money used for the adoption helped to pay for Turbo’s food, medical care, hospital care and tank maintenance at the center.

If the turtle that receives the treatments and food fully recovers, like Turbo for example, they will be released back into the ocean, Aurora Johns said.

“Graham’s first Turtle adoption, Scallywag, was adopted from Loggerhead Marinelife Center and we were able to watch a long video on their Facebook page of him being released,” Aurora Johns said. “Graham was so happy.”

The idea to create comic books for turtle conservation came from Graham’s love of turtles, as well as the superhero that he created and dresses up as, turtle man.

“Graham was born with an affinity for turtles,” Aurora Johns said. “He’s always loved turtles, so we started visiting turtle sanctuaries. He really fell in love with the fact that these sanctuaries would help the turtles and release them back into the ocean. He also had this character that he would dress up as that he called turtle man. They wanted to raise money, so I suggested a fundraiser for this cause. I thought about what they could sell and since Graham was into dressing up as turtle man, we thought about creating comics.”

The comics are created almost entirely by Graham and Daniel, with the exception of the printing and scanning, which is done by their mother. It took more than a year to get started and the boys worked hard to earn enough money to get the organization up and running. Aurora said that their goal for the year is to try and adopt a turtle a month.

“They are very focused for such little guys,” Aurora Johns said.

To donate to Graham’s Turtle Team, visit their Facebook page at www.facebook.com/GrahamsTurtleTeam. For interest in purchasing a comic book, send an email to this page.

For more information on Loggerhead Marinelife Center and how to adopt a turtle, visit marinelife.org.