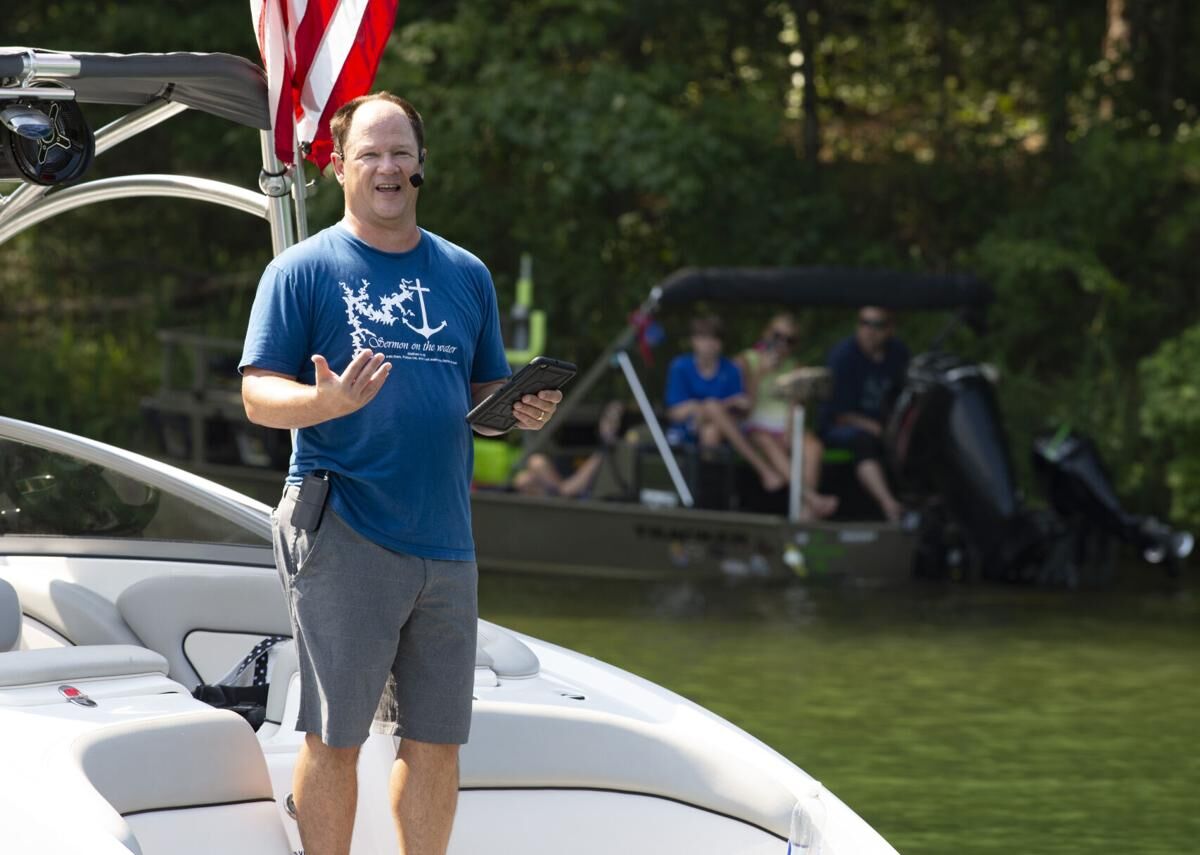 Jason Watkins preaches from the back of his boat to a congregation that is a flotilla of fellow Allatoona Lake boaters. 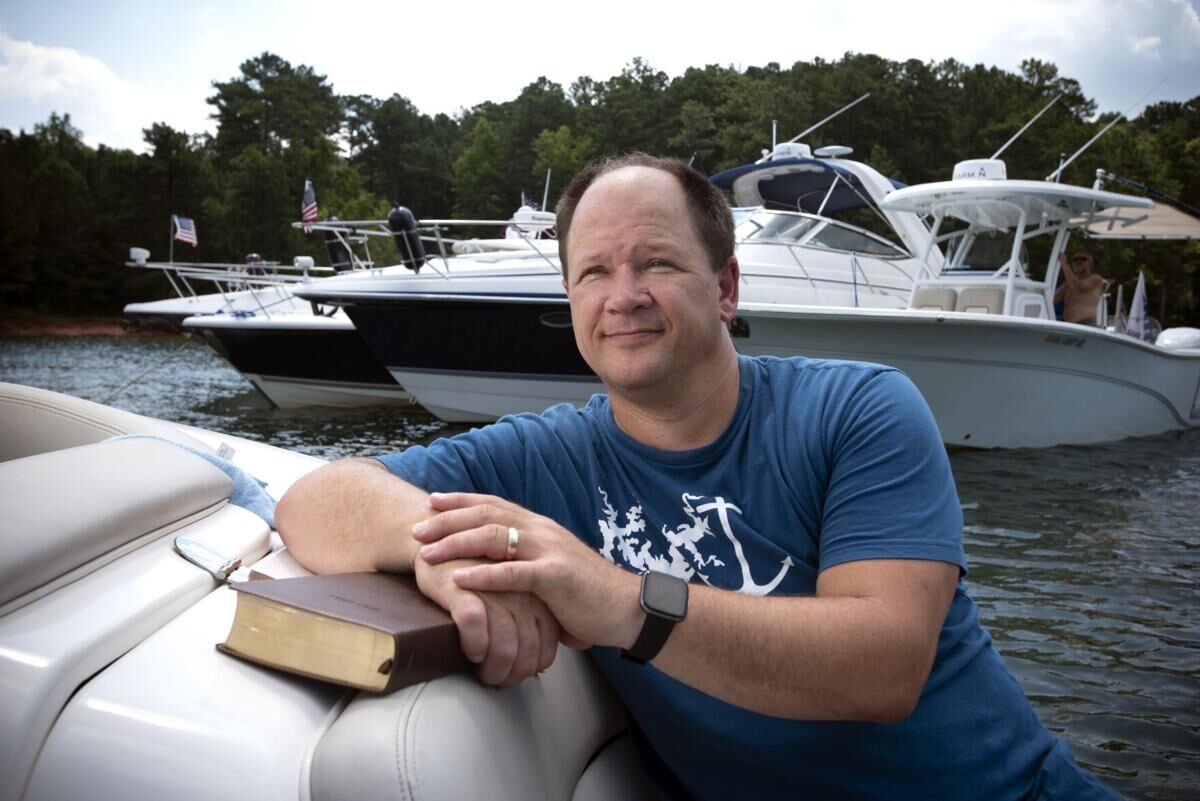 Jason Watkins got the idea for preaching on the lake from the television series ‘Ozark’ which filmed a similar scenario on Allatoona Lake in its first season.

Jason Watkins preaches from the back of his boat to a congregation that is a flotilla of fellow Allatoona Lake boaters.

Jason Watkins got the idea for preaching on the lake from the television series ‘Ozark’ which filmed a similar scenario on Allatoona Lake in its first season.

Jason Watkins finished connecting his mobile phone to the sound system and pressed the play button. As praise music filled the serene lake air, Watkins sat at the back of his Yamaha Jet Boat and watched his floating congregation motor into place on Allatoona Lake’s Recreation Cove near Acworth. They came by canoe, paddleboard, flatboat, pontoon boat, and 40-foot yacht to hear his message.

It was Sunday morning, and time for church. But church doesn’t have to mean a bricks-and-mortar building, the 49-year-old information technology executive said.

“I call it ‘Sermon on the Water,’” said Watkins, who lives in Cherokee County and preaches to a loose gathering of boaters several times a month from May through September.

The idea stemmed from the Netflix series “Ozark,” which was filmed on Allatoona Lake in 2016, Watkins said. Producers needed boats in the scenes, and Watkins joined dozens of his boating friends on the set as movie extras.

“Of course, no one really knew what the show was about — they just needed people in their boats in the background for the scenes. I’ve been boating for 11 years, but I’ve always lived around this lake,” he said.

The TV series features a preacher who gives sermons from his boat. Watkins said he had a friend who kept asking him to do the same.

“He said, ‘There’s a lot of us who would actually come to hear you,’ but I told him there was no way I was going to do that,” said Watkins, who teaches a youth group at First Baptist Church in Woodstock.

Watkins said he started praying about the request and came up with 100 reasons not to do it.

“But then one day, God told me he just wanted me to show up, so I showed up. The first Sunday, four boats came with a bunch of people on each boat. The next weekend we had seven, and the week after we had 15 boats come. And we’ve had as many as 29 boats. Who would have thought?” he said.

Even if the number of boats approaches 50 in the quiet cove, “It will all be okay. People are still on their own boats, and even when they tie up to another boat, they’re practicing social distancing.”

“A lot of those who come have given up on church — because of man-made religion and rules. A lot of them felt like they were judged, or they didn’t wear the right clothes or say the right things. On the lake, it’s totally ‘come as you are.’ It’s a relaxed atmosphere, you’re outside, surrounded by all this nature that God created.”

One attendee, Dana Colten, was skeptical of what he calls “organized religion” when a boating friend invited him to one of Watkins’ sermons three years ago.

“I was hesitant at first, but then I started really listening to what Jason was saying. There was a lot going on in my life at that time and it was like he was talking right at me,” said Colten, 50, a commercial pilot from Smyrna.

Colten and his wife had a pontoon boat for several years, but decided to upgrade to a 35-foot cruiser in 2019.

“We wanted to be out there all day on Saturday and sleep on our boat Saturday night. We call it our floating condo, but we did it so we could be already be out there for Sunday morning’s sermon,” Colten said. “I’m in such a relaxed and peaceful place, enjoying a beautiful lake and all the trees, and listening to Jason’s message that really talks to my soul. It’s not about religion, it’s just that what he talks about is something everyone can relate to, and it comes right from his heart,” he said.

Watkins stands at the back of his Yamaha Jetboat to deliver his sermon, which is broadcast from a low-powered radio transmitter.

“The signal doesn’t quite reach a half-mile, but the boaters tune in on their radios to hear me. They don’t have to look at me, and many of them don’t. They might be anchored quite a bit away from me, but they can hear the message sitting on their boat.”

Several boaters come by after the services to talk, and Watkins has developed several friendships with boaters who come to him for pastoral advice.

“Some of them have never had a pastor before, someone they can share their problems with,” he said. “I’ve reached people who weren’t Christians. I’ve had Jewish boaters who said they never would have believed in their entire lives that they’d be attending a Christian church. But here they are, and now they look forward to coming to the Cove every weekend to hear the message.”

Kim Rocker, 52, of Acworth, said she and her husband “love sitting in the water and listening to Jason’s message.”

“I wasn’t raised in a religious home, but now I can actually say I go to church now and I love it,” she said. “I remember one Sunday when he talked about forgiveness and conflicts in relationships, and that really hit home with me, because I had to learn to forgive myself for stupid decisions I’d made in my life,” she said.

She now attends a women’s Bible study and said she knows her life has changed for the better.

“I’m a very free-spirited person, but I’ve learned to slow down and take time for God. Jason’s sermons really change my heart. And where else can you go to church in your bathing suit? A lot of the guys might not want to go to a regular church, but they’ll come to this and love it. Jason reaches a lot of people who would have stayed away from churches otherwise,” she said.

He plans to gather every other weekend through the end of the boat season in early October, depending on the weather. His ministry is now nonprofit certified and is supported entirely by donations.

“The best thing about it — aside from being on the water, surrounded by all the beauty — is connecting with other people,” he said. “I get contacted all the time by people asking me to pray with them, folks saying ‘hey, I’ve got this dilemma in my life, what should I do? And I always lead them back to the Bible, because that’s where the answers are.”

Watkins has officiated for several weddings, and said he could envision serving as a full-time pastor someday. “It’s what brings me the most joy,” he said.