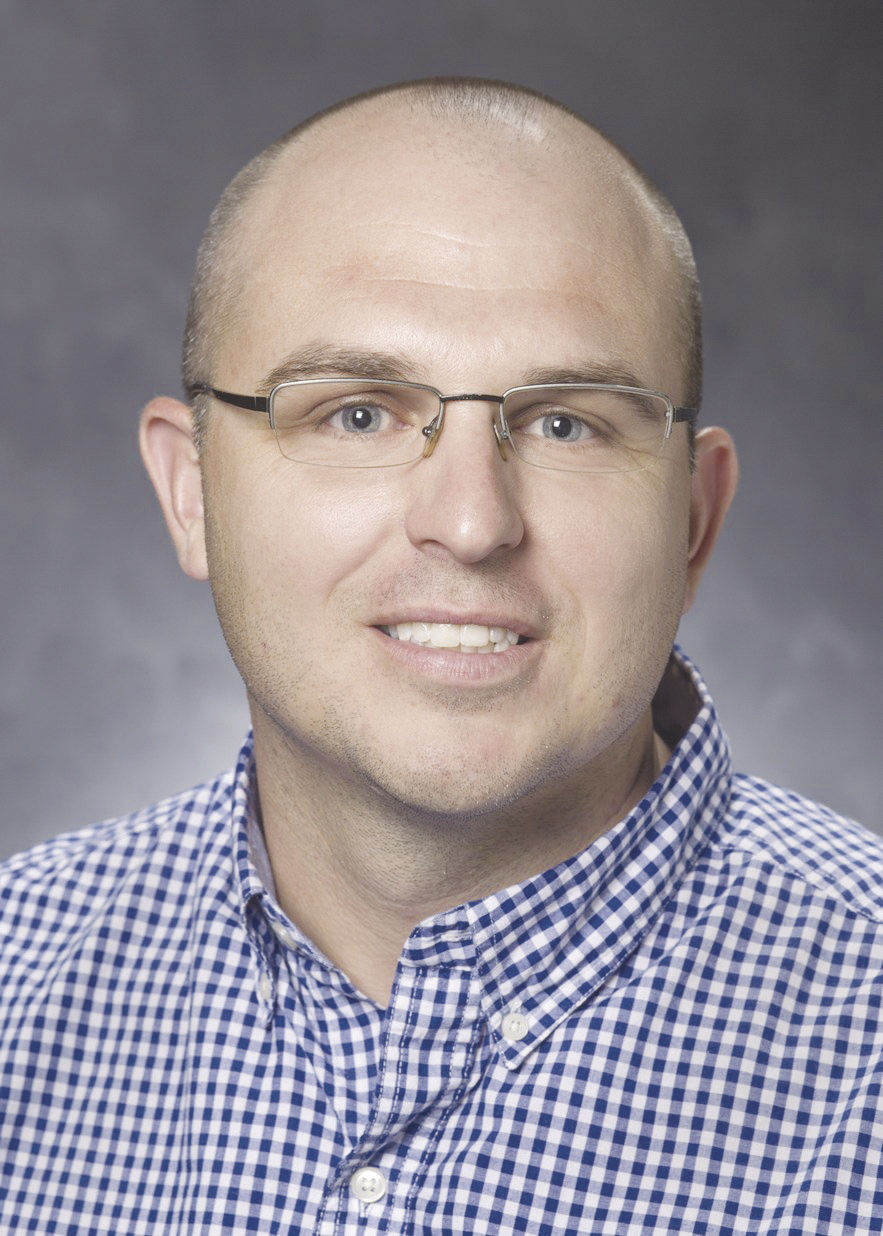 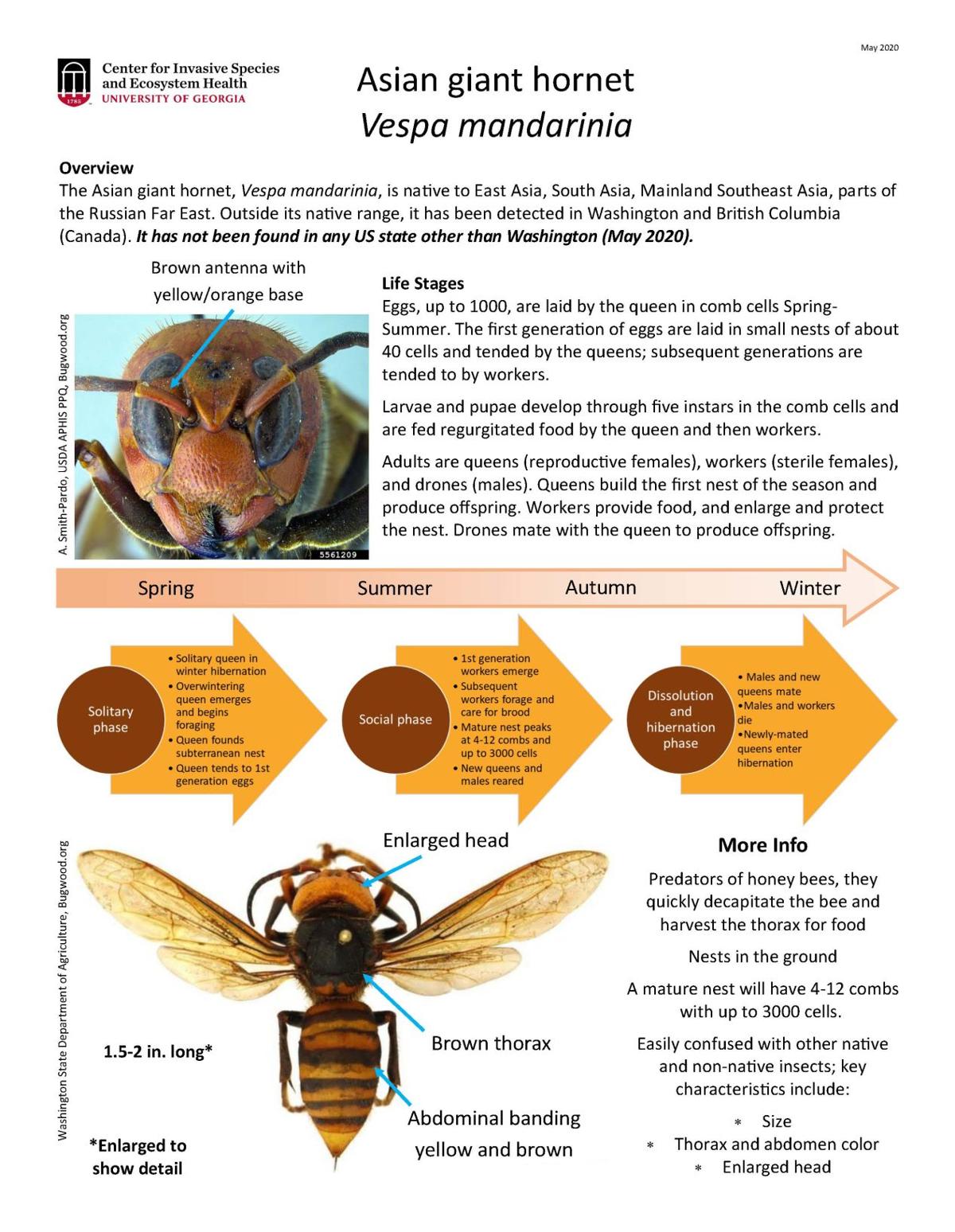 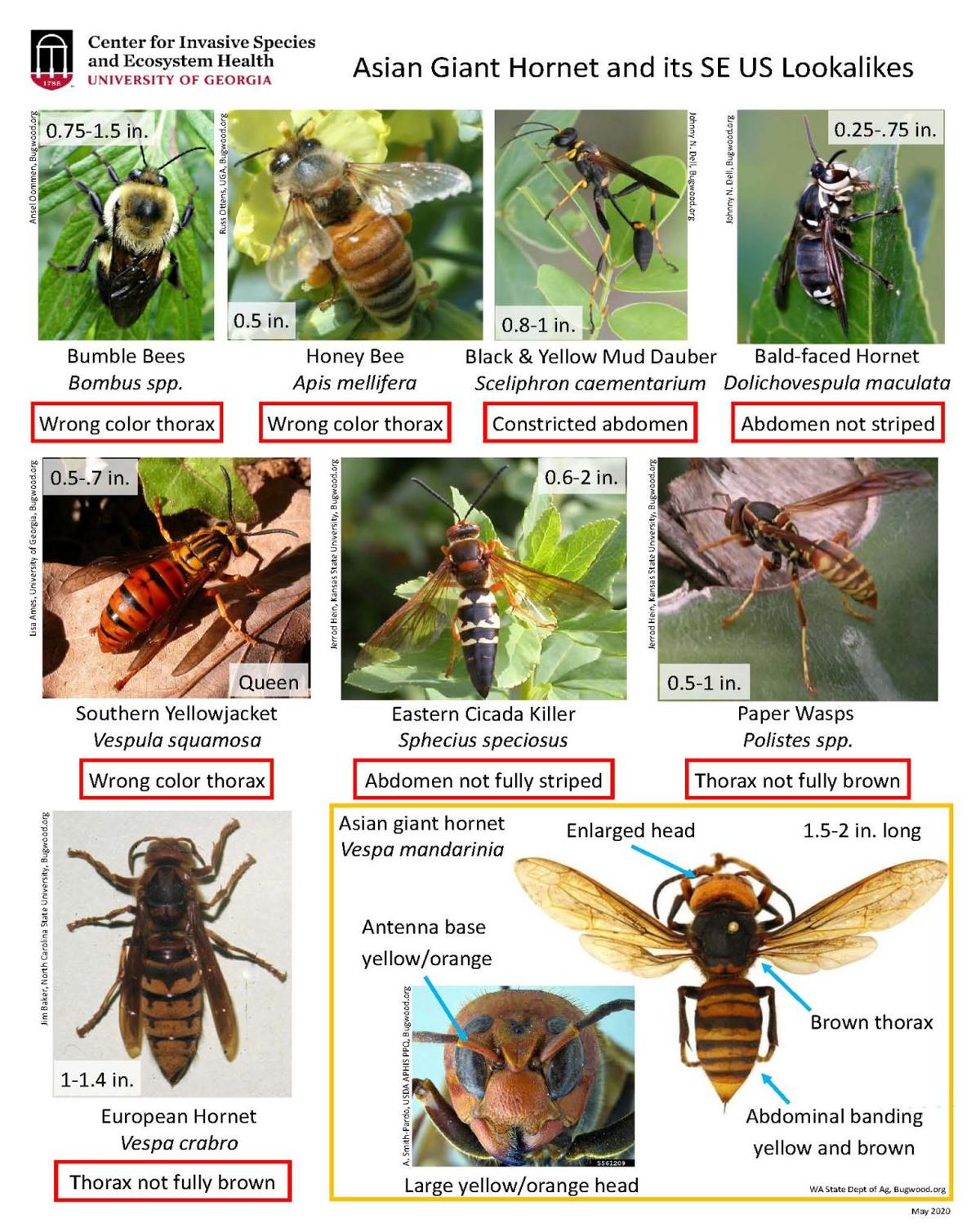 Every spring, I receive calls and emails from individuals that have found a giant wasp or hornet. Occasionally one of these concerned citizens had done their own internet sleuthing and started their questioning with the Asian hornet and its presence in Georgia. That’s all changed this year after a flurry of recent press coverage has created a surge of interest in the Asian giant hornet, Vespa mandarinia. The coverage is not traced to any current event. The insect was found last September 2019 in Vancouver Island (Canada) and again in December 2019 in Washington state. But to date, this invasive insect is not present in the state of Georgia, nor indeed, East of the Mississippi.

The Asian giant hornet is a “true” hornet and the world’s largest, ranging in size from 1.5 to slightly over 2 inches long (38-50mm). The stinger is nearly ¼-inch long, and stings are extremely painful. Each year in Japan, 30-50 people die from being stung by these hornets. The venom is not the most lethal among bees and wasps, but due to the insect’s large size, the dose is larger than any other stinging insect Americans typically encounter. Human sting deaths are biased toward individuals who are prone to anaphylactic reactions or to individuals who receive large numbers of stings. One or a few stings from an Asian giant hornet should not be life-threatening to an average individual.

The Asian giant hornet is not necessarily aggressive towards humans, livestock, or pets but will sting if provoked. However, this giant killer can inflict a devastating blow to honey bee colonies, with several hornets capable of annihilating 30,000 bees within hours. There are three phases to an Asian giant hornet attacking a honey bee colony. The first is the hunting phase, where individual hornets will capture bees at the entrance of the colony, cut off their heads, and form a “meat ball” from the thorax. They then return to their nest to feed their young this protein-rich meal.

The second phase is the slaughter phase. Hornets will mark a particular colony with a pheromone to recruit their sisters to the site. Then, numerous hornets will descend upon the colony, killing all the workers by ripping their heads off, dumping their bodies onto the ground below, and returning to their nest with their prey.

Once the beehive is dead, hornets enter the occupation phase. Hornets take over the hive, collect pupae and larvae, and return to their own nest to feed their carnivorous young. The hornets now guard the hive entrance as if it were their own nest. The aftermath of an attack will be piles of decapitated or ripped apart bees in front of a colony. The visible key to an Asian giant hornet attack is “decapitated” or “ripped apart” bees and not just a pile of intact dead bees, which could be the result of pesticides, starvation, or something else.

This is the hornet that incites the famous bee defensive response of “cooking” hornets to death. Asian honey bees grab an invading hornet, pile around it and raise their thoracic temperatures to the critical temperature that is lethal to wasps but tolerable to bees. Unfortunately, American honey bees, of European not Asiatic descent, do not have this behavior.

The Asian giant hornet’s life cycle is typical of that for other social wasps and yellowjackets. A solitary female emerges from winter hibernation and founds a subterranean nest, at first performing all nest duties including foraging and incubating the young. The colony steadily grows until workers eventually take over all foraging duties. New queens and males emerge in late summer and mate. Eventually, the males and workers die, leaving only the newly-mated queens who overwinter in isolation.

Currently, there have been no confirmed cases of this hornet’s presence in Georgia or anywhere outside of Washington state. Other wasps and hornets already residents in our state that may be confused with the Asian giant hornet are:

The Asian giant hornet and cicada killer may be similar in size but very different in coloration. The Center for Invasive Species and Ecosystem Health have put together an “Asian Giant Hornet and its SE US Lookalikes” photographic fact sheet which is extremely helpful for distinguishing between the different species in our state.

At this time, we need to be vigilant but not over-reactive since, again, there is no evidence that the Asian giant hornet has journeyed East. However, sightings and/or disturbances to honey bee colonies should be reported. If you think you have seen an Asian giant hornet, found evidence of an attack (decapitated or ripped apart bees) or have a specimen, please contact your County Extension office 770-721-7803 or jfuder@uga.edu . We will be able to collect your information and correctly identify the specimen. For photos and more in-depth information about the Asian giant hornet, please check out the following:

Joshua Fuder, Agriculture and Natural Resources Agent, UGA Cherokee County Extension office. If you have any questions, call 770-721-7830 or visit my blog @ blog.extension.uga.edu/cherokee. For upcoming seminars, follow us on Facebook at www.facebook.com/ cherokeemastergardeners or on our website at cherokeemastergardenersinc.wildapricot.org.