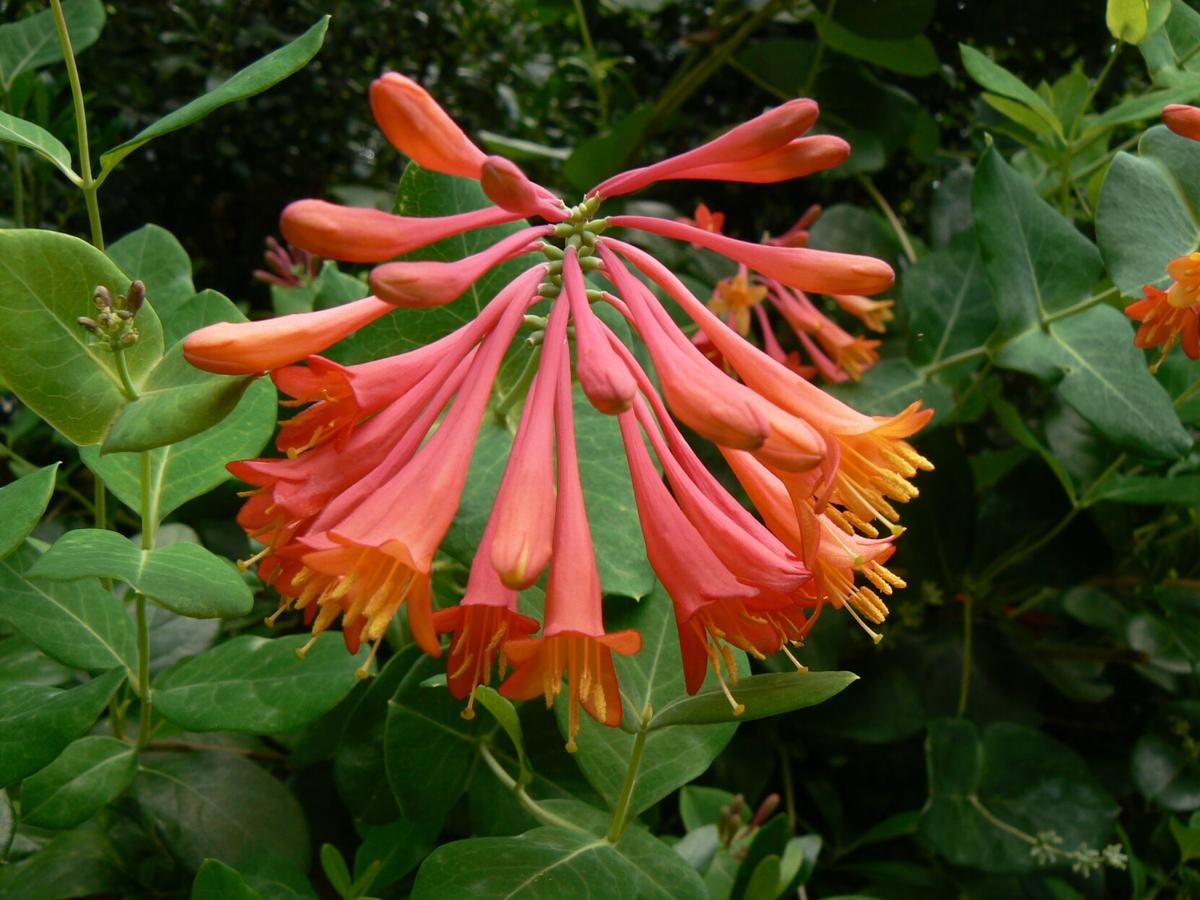 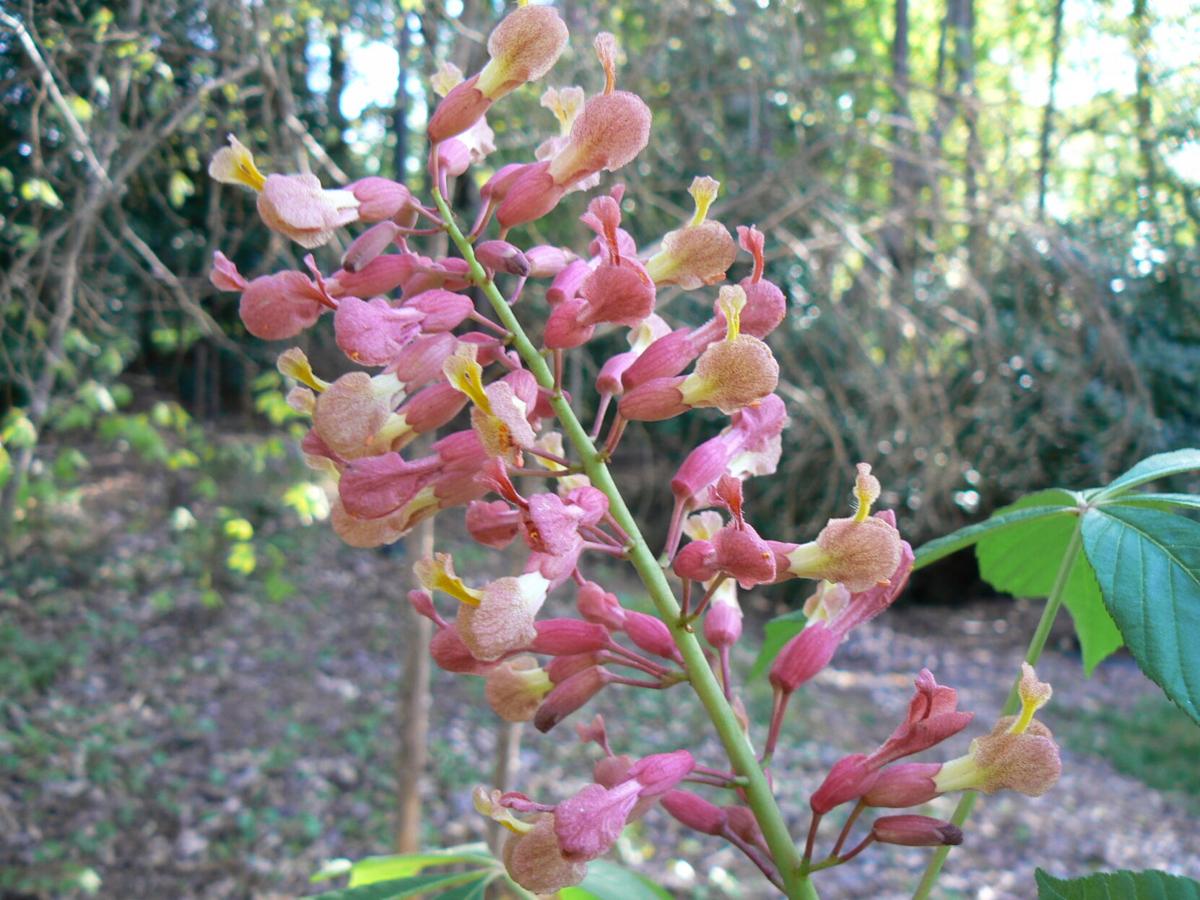 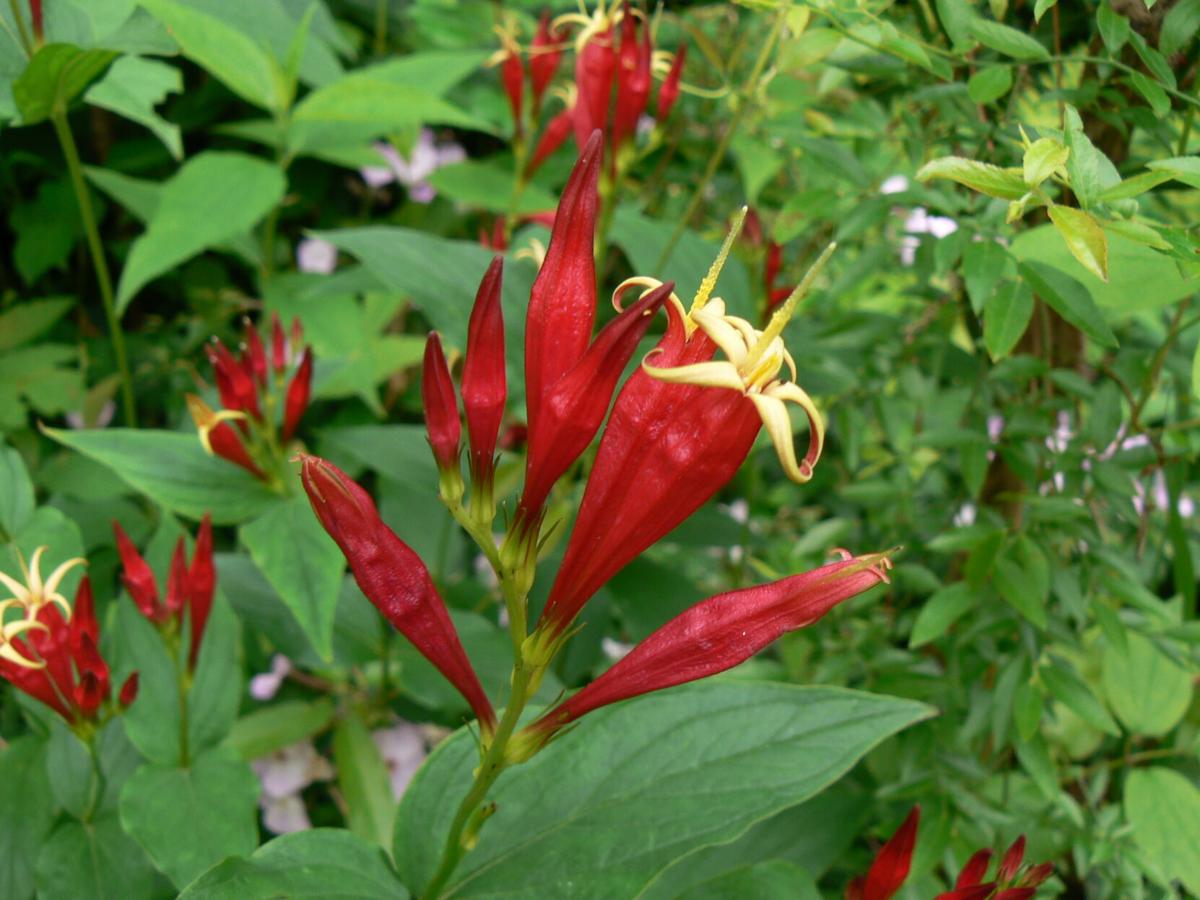 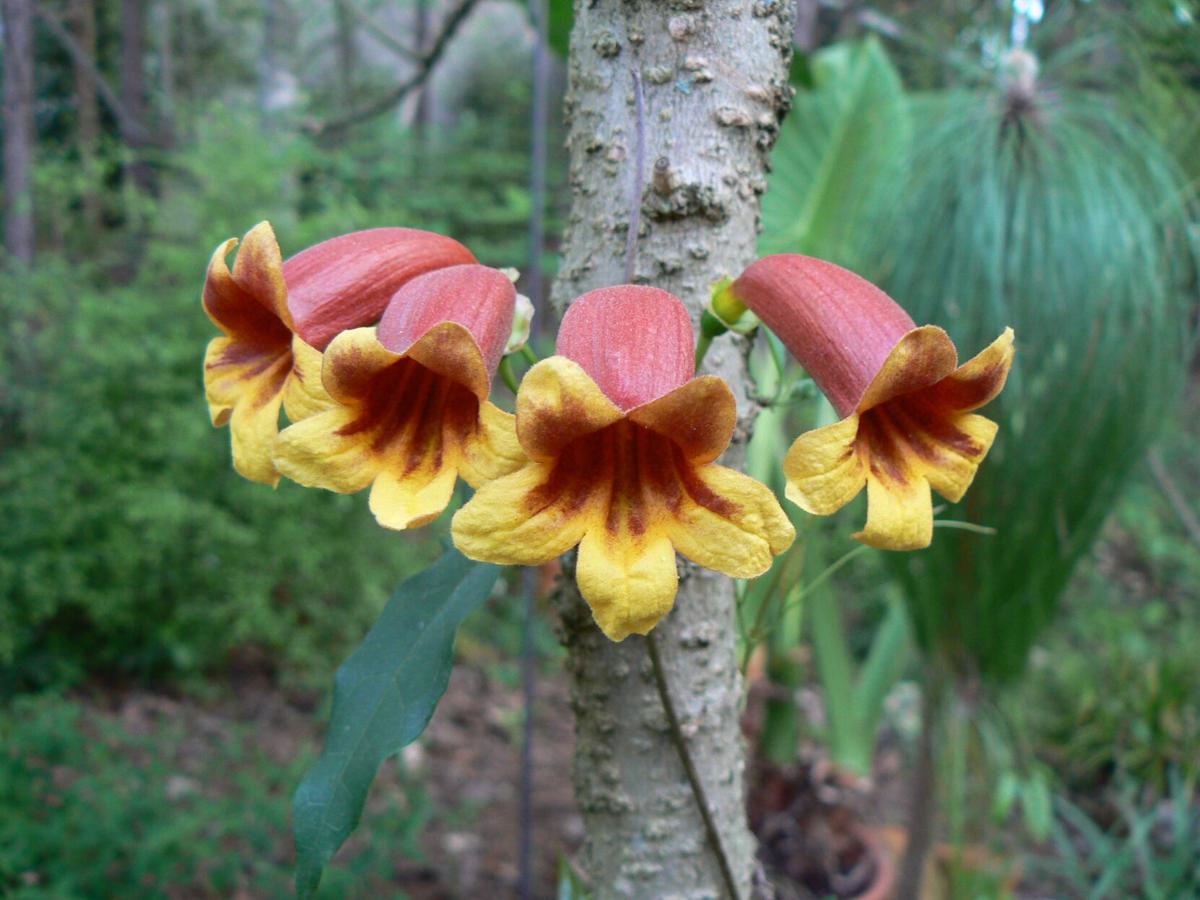 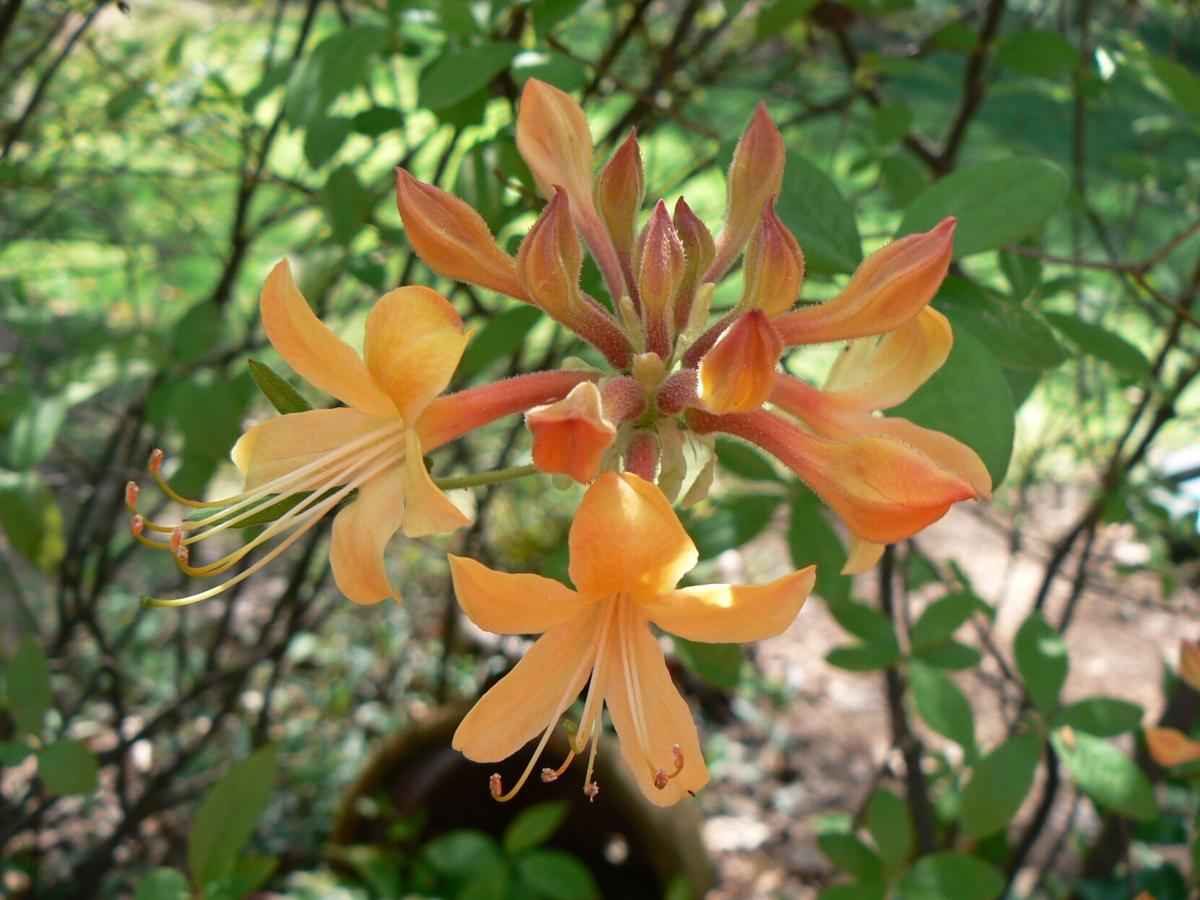 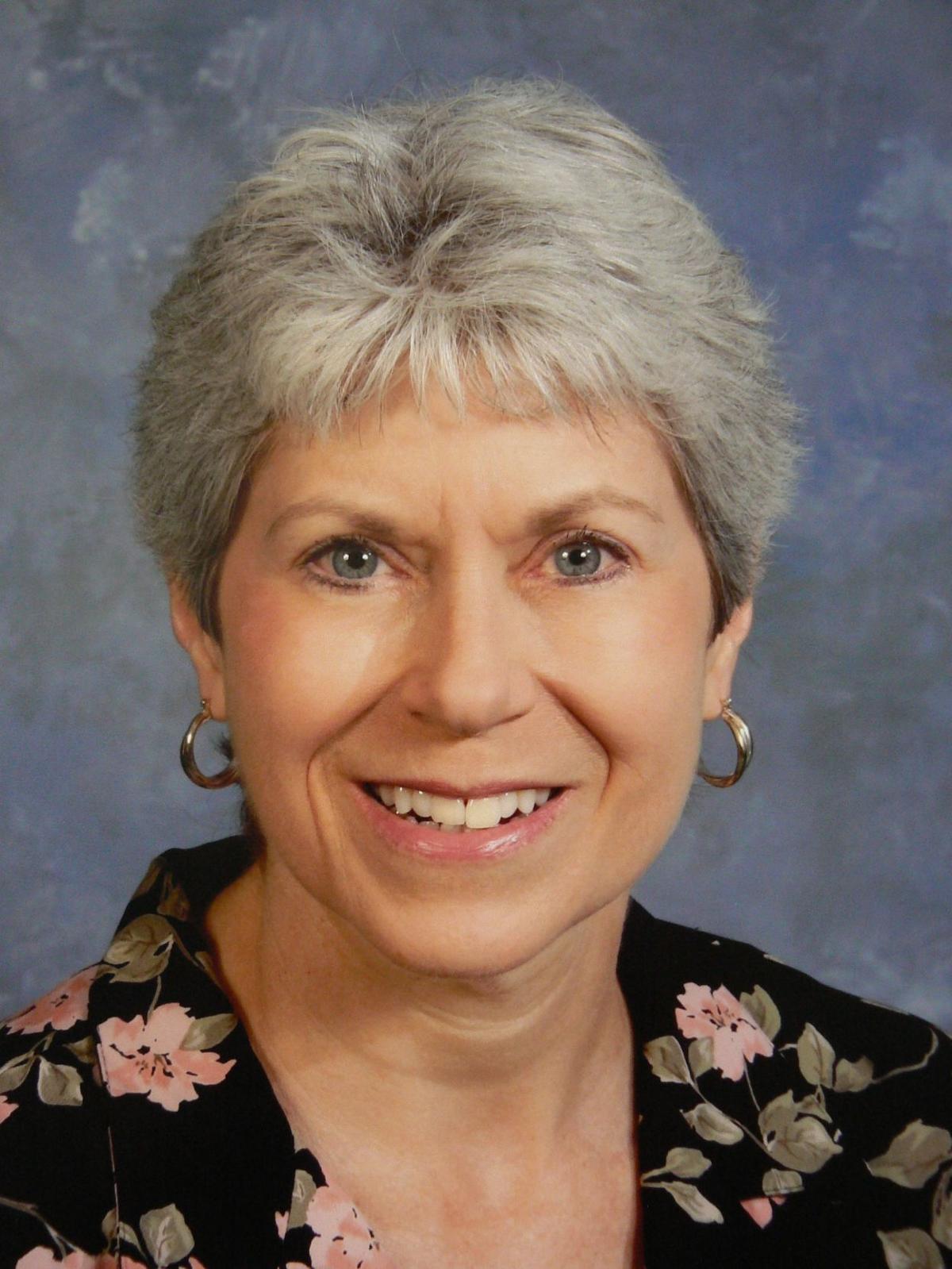 The hummingbird is a true American beauty, found only in the Western Hemisphere. Though there are hundreds of species, just one, the ruby-throated hummingbird (Archilochus colubris), is known to breed east of the Mississippi River. After they visit us for the summer breeding season, they make the long trip back to their winter homes in warmer climes of Mexico and Central America. Then they return to our region in the spring.

The hummingbird’s long bill and tongue are perfectly adapted to extracting nectar from many flowers, and the bird has coevolved with these plants. In general, the plants that have evolved with the hummingbird have characteristics in common. They are often trumpet-shaped or tubular, with nectaries at the base of the corolla. As the bird gets its meal from a nectar-laden blossom, its head inevitably gets dusted with pollen and in turn deposits it on the next bloom it visits, ensuring the plant’s reproduction.

The ruby-throated hummingbirds begin leaving their wintering grounds as early as January, their migration coinciding with the blooming of nectar-producing plants. By early March they begin to reach the lower part of the Southeast. By mid-April, they have migrated into most of their breeding territory.

To welcome these birds with blooms, it’s best to use native plant species that co-evolved with hummingbirds and fill their nectar needs.

Several lovely native vines begin to bloom around the time the hummingbirds return to the Southeast. Crossvine (Bignonia capreolata) sports a trumpet-shaped bloom that is bronzy red and yellow. The foliage is evergreen to semi-evergreen, and the vine is happy scrambling up trees or over an arbor. Another attractive, native, semi-evergreen vine is trumpet honeysuckle (Lonicera sempervirens), which bears thin, tubular, scarlet flowers that dangle in clusters. It typically grows 12 to 15 feet tall, making it suitable for arbors, fences, trellises, and mailbox plantings.

Native shrubs and trees also serve the hummingbird well. There are many species and named cultivars of the native azalea (Rhododendron spp.), and all of them offer a bounty of nectar from their trumpet-shaped blossoms. The flower color and the bloom time of these shrubs vary among the species. Some of the earliest to flower are piedmont azalea (R. canescens), pinxterbloom (R. periclymenoides), and coastal azalea (R. atlanticum), which begin blooming as early as March or April. The flowers appear before or as the leaves emerge, making the blossoms easy to spot in the understory or edge of the forest, surely a welcome site for a hungry hummer.

Other early-blooming native shrubs that the hummingbirds adore are the spring-blooming members of buckeye, such as red buckeye (Aesculus pavia) and painted buckeye (A. sylvatica). In April and early May, just as the developing leaves are unfurling, these small trees or large shrubs put on a show with tubular blooms borne in large, loose, upright spikes.

A much taller treat of the forest is the tulip poplar tree (Liriodendron tulipifera), which blooms in April to May. Its large, tulip-shaped flowers are greenish yellow with an orange spot at the base of the petals, which advertises the nectar inside.

Closer to the ground, in the dappled sun of woodlands, the migrating hummingbird can find a selection of perennials from which to choose. One of its favorites is the native columbine (Aquilegia canadensis), which blooms in late March to early May. The distinctive red and yellow, bell-shaped flowers dangle from slender stalks and have spur-like nectaries. The striking flower of the Indian pink (Spigelia marilandica) greets the hummer from late April into June. Its red, tubular blossoms are held upright rather than dangling. The inside of the petals is a bright yellow, forming a star at the mouth of the bloom.

The sunny flower garden has offerings of its own. One of the best and earliest flowers for the hummingbirds is Texas sage (Salvia greggii), which starts blooming in late March or early April and continues throughout the summer. This Southwest native is a dependable, drought-tolerant performer in the Southeast, taking the form of a small 2- to 3-foot tall shrub. The flower shape is the typical salvia construction of a tubular corolla with a large lower lip. It is most often available in red, but other colors are sometimes offered by nurseries.

Any of these native plants will brighten your landscape with their brilliant blooms — and with the accompanying charms of that American beauty, the hummingbird.

GARDENING WITH THE MASTERS: Flowers in winter? Hellebores to the rescue!

The dreary days of winter can appear gloomier if our landscape looks brown and bare. So, we eagerly await the first signs of spring when birds…

GARDENING WITH THE MASTERS: My plant can do what?: Sophisticated senses and signals

We tend to think plants are rather simple, unaware entities. The truth is that they are quite sophisticated and tuned in to what is happening …