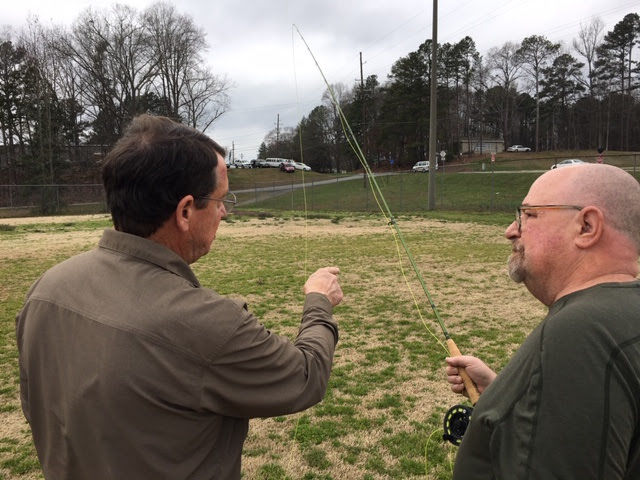 Rob Hilkin (left), member on the board of directors of the Cohutta Chapter of Trout Unlimited and leader of the program, showing veteran John Engstrom (right) the proper fly fishing technique. 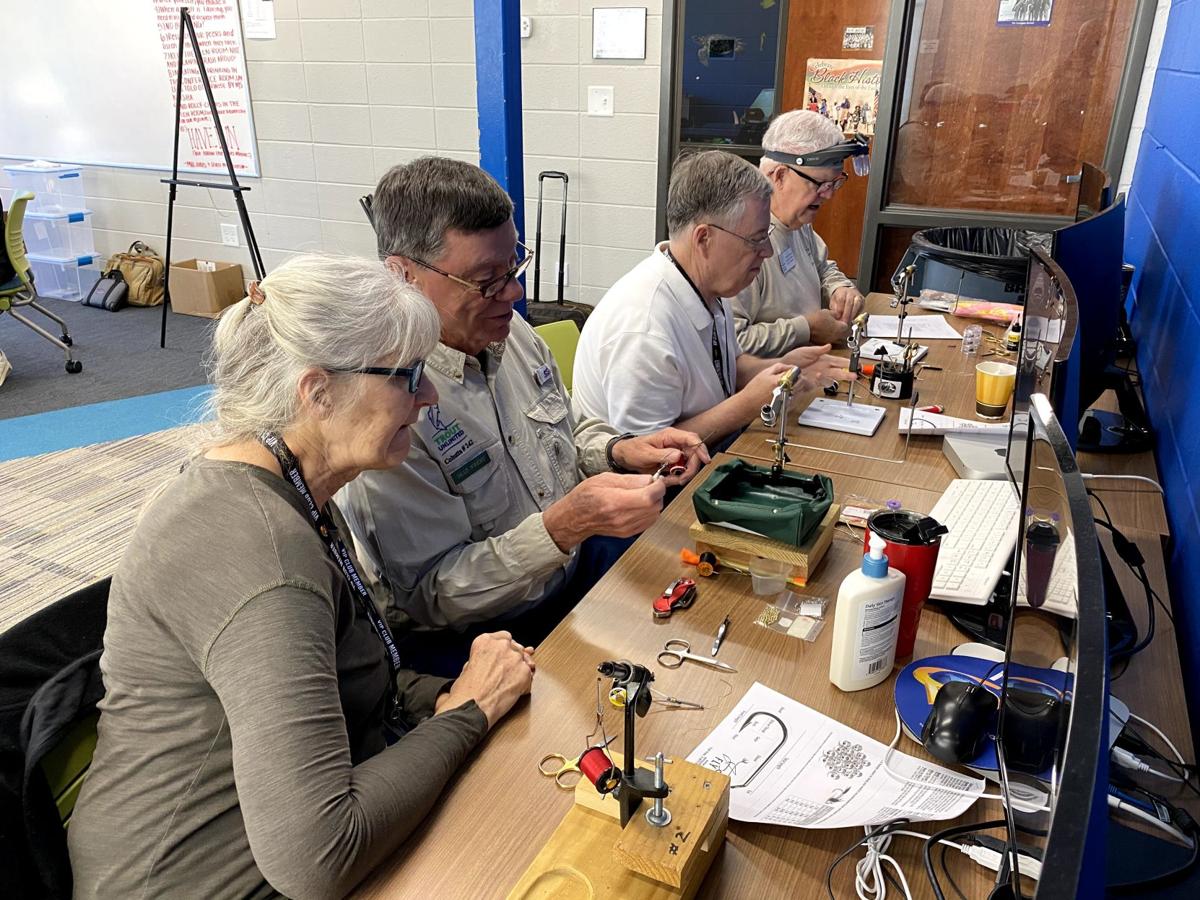 Veterans in the fly fishing program are taught how to tie flies and knots. They also learn about fishing lines and leaders. 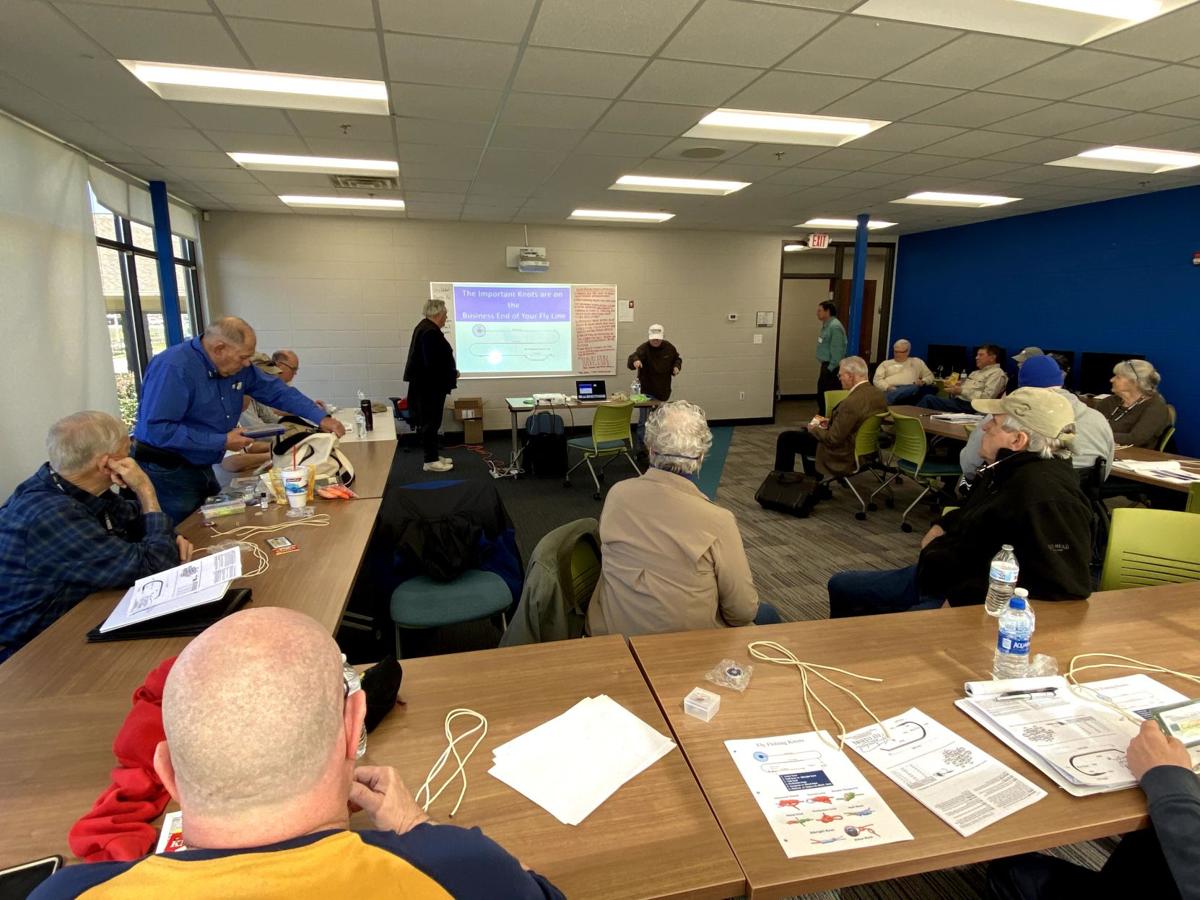 Rob Hilkin (left), member on the board of directors of the Cohutta Chapter of Trout Unlimited and leader of the program, showing veteran John Engstrom (right) the proper fly fishing technique.

Veterans in the fly fishing program are taught how to tie flies and knots. They also learn about fishing lines and leaders.

The Cohutta Chapter of Trout Unlimited and the Cherokee County Homeless Veterans Program partnered to create a free fly fishing program for disabled and older veterans in Cherokee County.

The program will culminate in a go fishing day on April 16 at Frog Hollow Fly Fishing on the Chestatee River.

“We are trying to look at how we can get veterans who are homebound, disabled, elderly, etc., out into society,” said Jim Lindenmayer, director of the Cherokee County Homeless Veterans Program. “We have taken it upon ourselves to help out these veterans who are in need of help.”

Another veteran that has been helped through this program is John Engstrom. Engstrom, like Bell, has post-traumatic stress disorder. He said that this is a program that he has never had the opportunity to experience before.

“I grew up in New York so I never went fly fishing, but when Jim (Lindenmayer) contacted me about this program, I wanted to take part in it because he has done so much for me,” Engstrom said. “I recently started tying flies, which is something I didn’t think I would ever be able to do after suffering second and third-degree burns on my hands when I was in the Army.”

Engstrom also said that he has enjoyed meeting all of the veterans and instructors who are taking part in the program.

“I have PTSD, so going out and meeting and talking with all these people has really helped me a lot,” Engstrom said.

“There was a gentleman that attended the last class that had a brain injury,” Hilkin said. “He sat up front during the fly tying exercise and after about a half hour of watching the other veterans tie the flies together, he wanted to give it a try. He ended up tying a San Juan Worm, which is a basic fly, but he was so delighted that he was able to tie a fly.”

Don Thomson, president of the Cohutta Chapter, added that the program has been successful in many aspects so far and he is happy that it has allowed the veterans a chance to get out of the house and participate in many activities and learn new concepts.

Trout Unlimited is a national nonprofit organization that focuses on the conservation of freshwater streams and rivers, as well as the education of youths and adults. The Cohutta chapter has locations in Cherokee, Cobb and other counties throughout Georgia.

The organization offers an environmental education program in which students, grades K-12, raise trout from eggs to fry, monitor tank water quality, engage in stream habitat study, learn to appreciate water resources, begin to foster a conservation ethic and grow to understand ecosystems. Most programs end the year by releasing their trout in a state-approved stream near the school or within a nearby watershed.