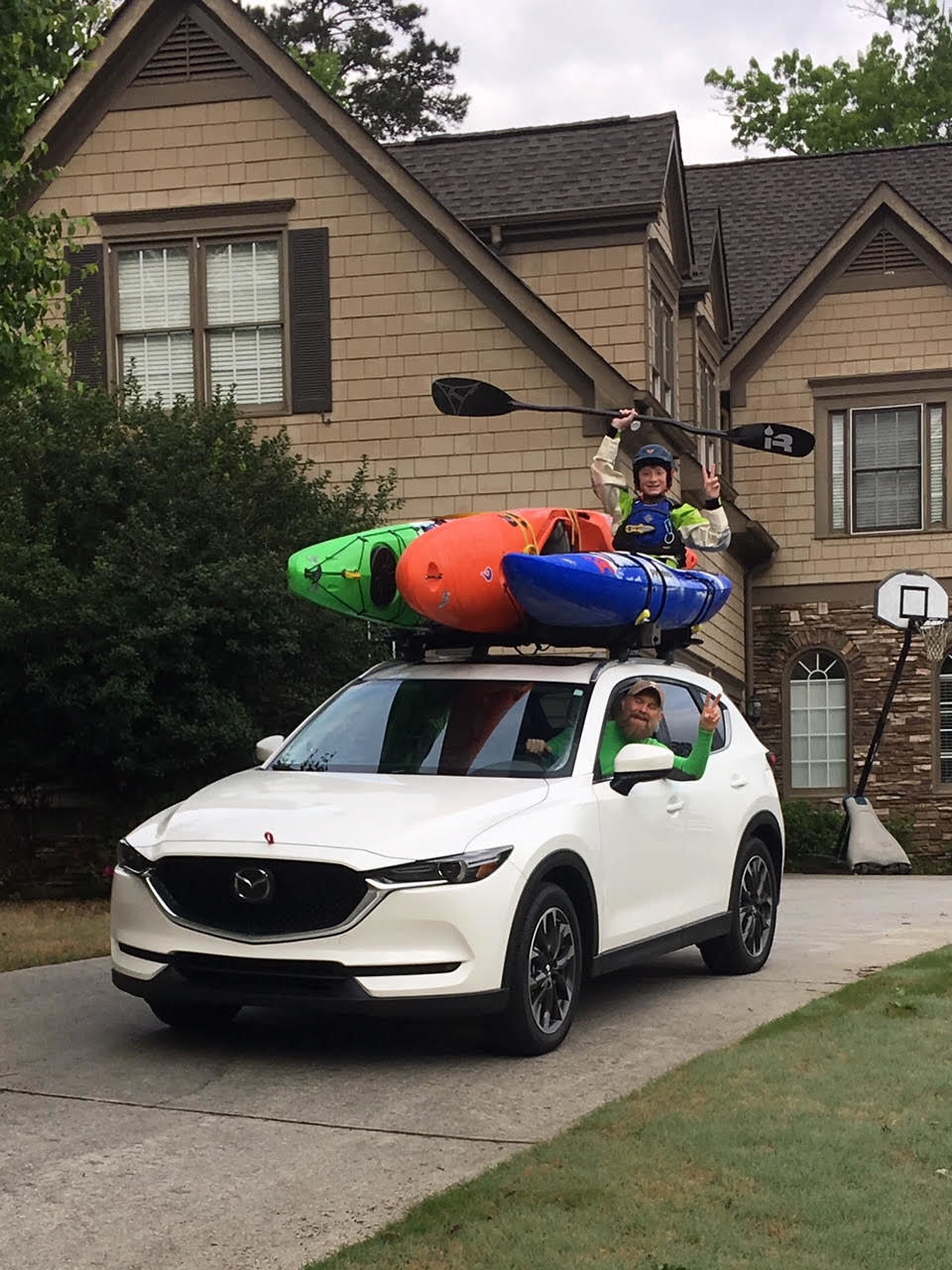 Mike and Max Hurndon load up their kayaks in preparation for a record-breaking 280-mile trip down the Colorado River through the Grand Canyon starting Tuesday. Upon completion of the 13-day trip, Max Hurndon, 12, will be the youngest person to self-support kayak the entire distance. 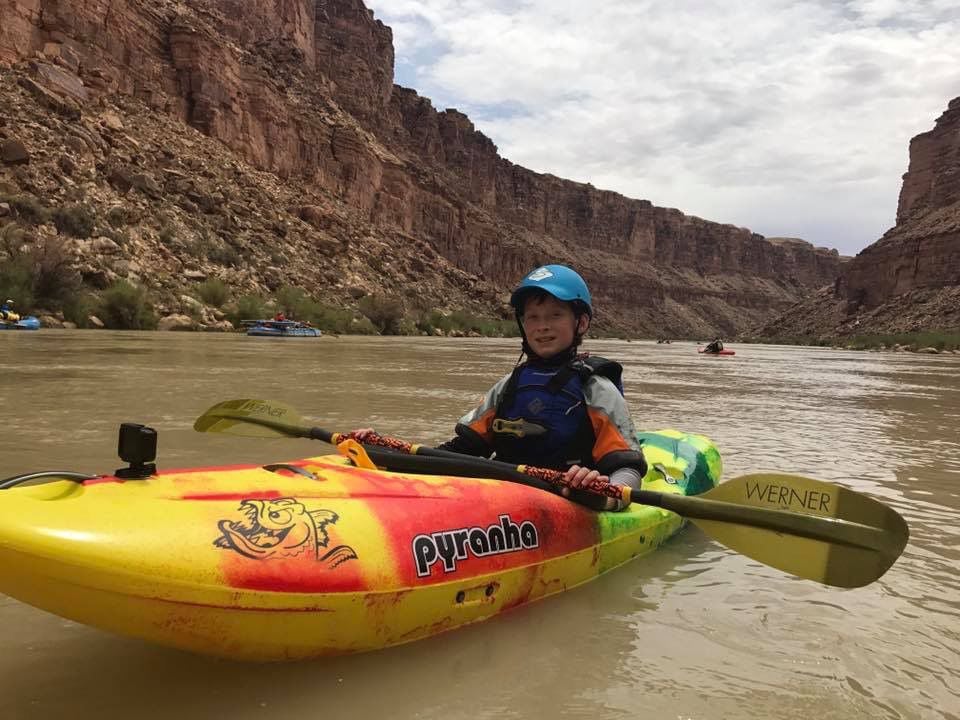 Max Hurndon, 12, drifts on flat water on the Colorado River in August. He paddled the 280 miles of Colorado River through the Grand Canyon with support rafts on the August trip setting a world record, and will set another upon completion of his trip without support rafts, beginning on Tuesday. 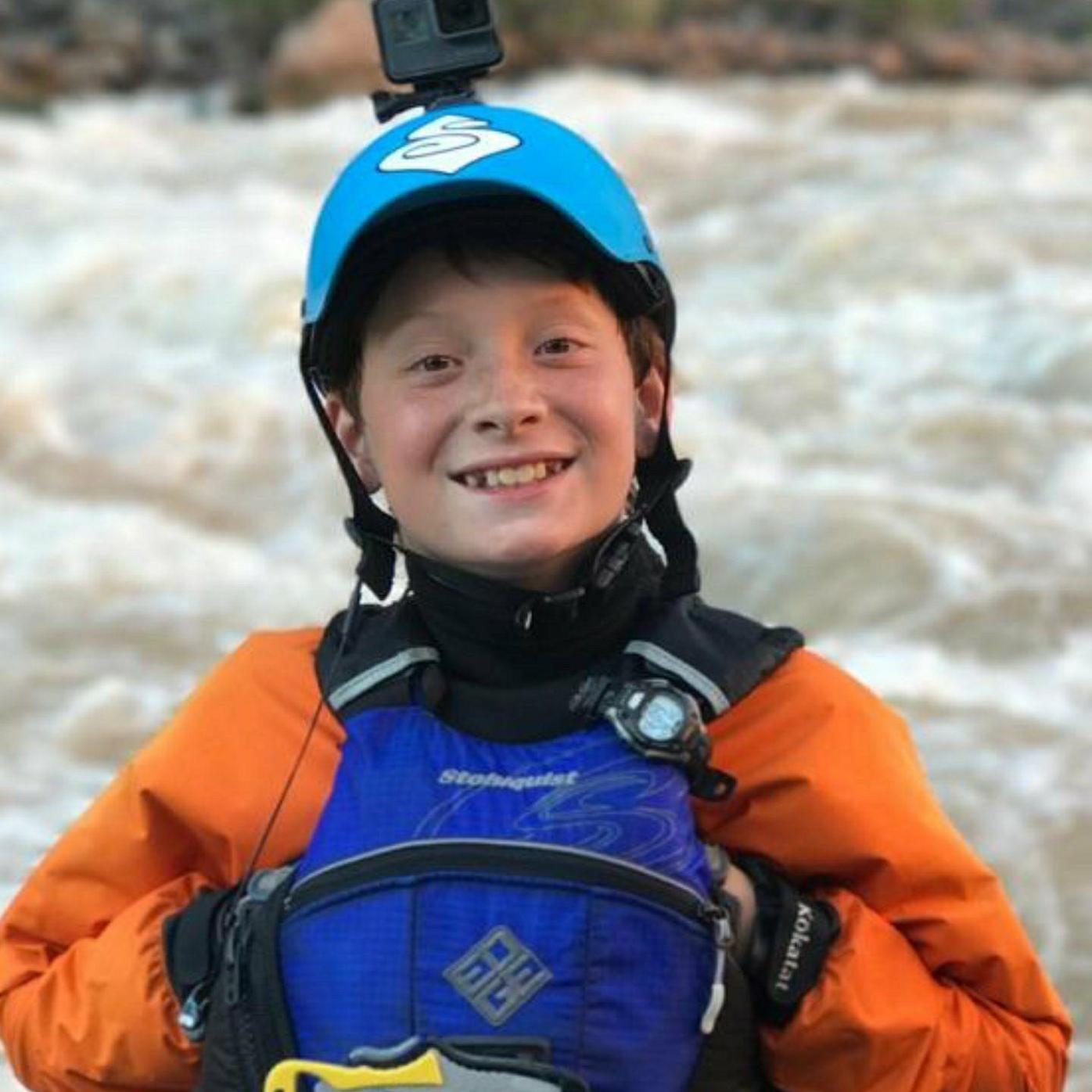 Max Hurndon, 12, stands in front of the Colorado River in August during a history-making trip that made him the youngest person to paddle the 280 miles of the river through the Grand Canyon. He pushes off for another record-breaking trip on Tuesday, when he’ll paddle the 280 miles again, without support rafts full of supplies. 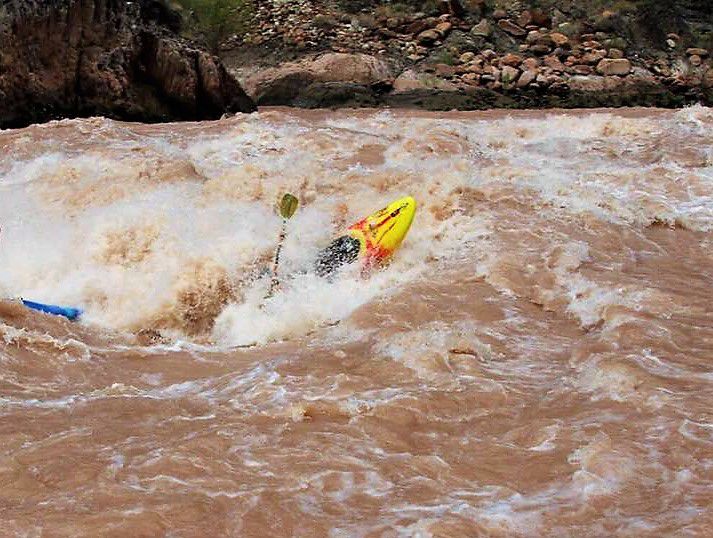 Max Hurndon spins in Colorado River rapids during his August trip through the Grand Canyon. 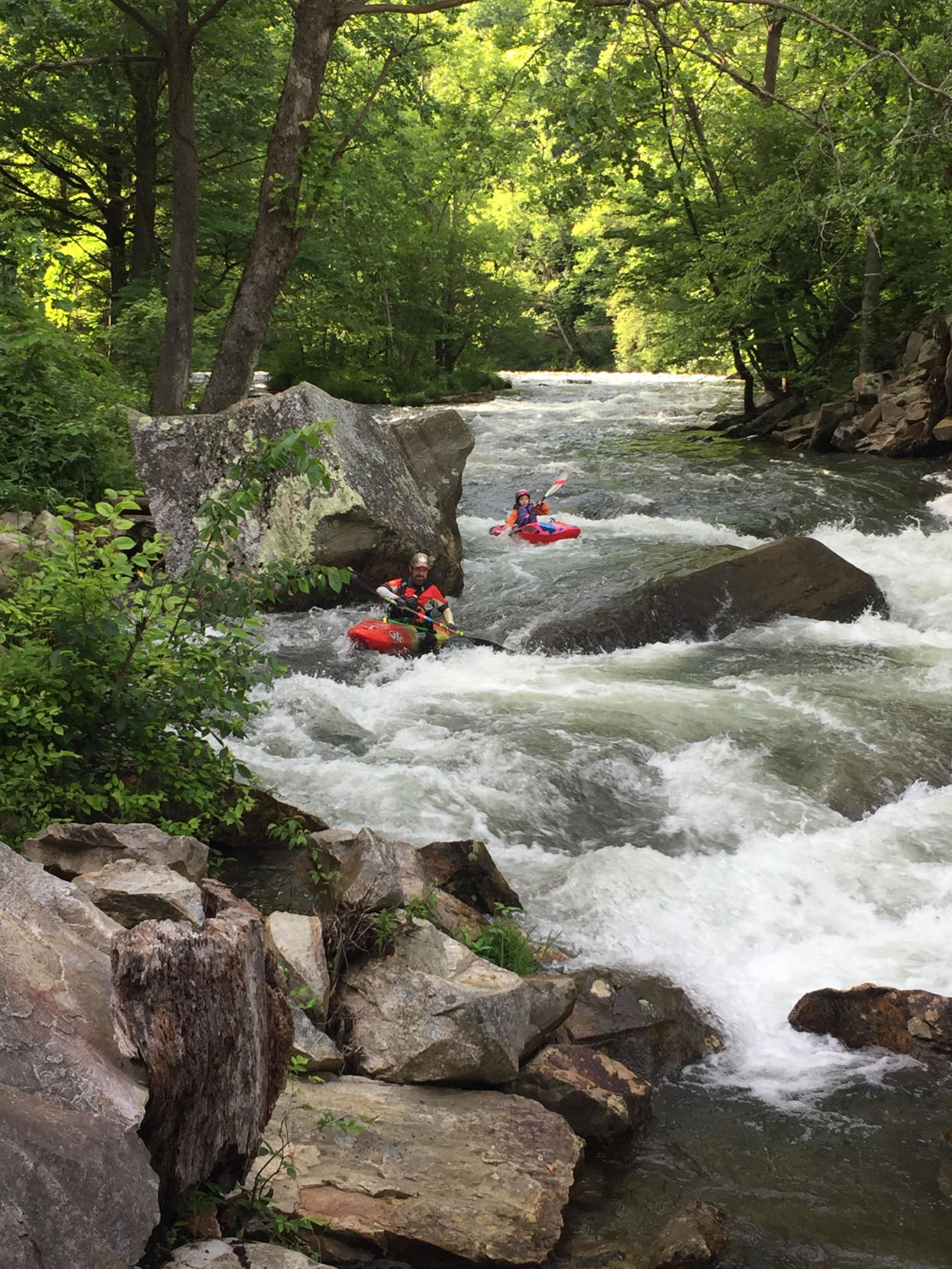 Mike and Max Hurndon load up their kayaks in preparation for a record-breaking 280-mile trip down the Colorado River through the Grand Canyon starting Tuesday. Upon completion of the 13-day trip, Max Hurndon, 12, will be the youngest person to self-support kayak the entire distance.

Max Hurndon, 12, drifts on flat water on the Colorado River in August. He paddled the 280 miles of Colorado River through the Grand Canyon with support rafts on the August trip setting a world record, and will set another upon completion of his trip without support rafts, beginning on Tuesday.

Max Hurndon, 12, stands in front of the Colorado River in August during a history-making trip that made him the youngest person to paddle the 280 miles of the river through the Grand Canyon. He pushes off for another record-breaking trip on Tuesday, when he’ll paddle the 280 miles again, without support rafts full of supplies.

Max Hurndon spins in Colorado River rapids during his August trip through the Grand Canyon.

When 12-year-old whitewater kayaker Max Hurndon heard that his history-making rival, a young female national kayaking champion had again set a new world record, he told his dad, Mike Hurndon, that it was time to take a trip.

The father-son duo placed Max Hurndon in the record books in August as the youngest kayaker to paddle the entire length of the section of Colorado River that traverses the Grand Canyon, dethroning another 12-year-old, Abby Holcombe, who had taken the trip only months before and was only months older. But Mike Hurndon said Holcombe and her family recently raised the bar again in February, paddling the 280 miles without support rafts full of supplies.

“When Max heard about it, he said, ‘Papa, let’s go do that,’” Mike Hurndon said on Monday.

The Canton duo, with six other men, will push off from Lee’s Ferry in Arizona on Tuesday to begin their 13-day paddle to Pearce Ferry, and the Hurndons’ half of the group will carry only the supplies that will fit on their kayaks.

“I think it’ll be pretty neat to say that I’m the youngest person to ever self-support the Grand Canyon,” Max Hurndon said Monday. “But really, I’m just doing it because I really like paddling a lot, and I really enjoyed going down the Grand Canyon.”

Two canyon paddles in two years is unheard of for such a popular trip, and the family knows how fortunate they’ve been, Mike Hurndon said.

“I amazingly, by happenstance, won a launch date permit through a lottery (for the last trip),” he said. “To get a permit, you have to compete in a very competitive lottery system. Some people try for 10 years and don’t get a launch date. I (had) beginner’s luck – first time trying – and everybody was amazed.”

It was early 2016 when he won the launch permit for August 2017, and Max Hurndon “wasn’t in the equation” to participate as he had very little whitewater experience, Mike Hurndon said. But over the next year, Max Hurndon worked hard and, after convincing his mother, was allowed to take the trip where he further proved himself as an impressive kayaker, his father said.

“Max stayed in his boat where some of the other grown men fell out,” he said. “But the thing that probably made me the most proud with this whole experience was not Max’s paddling skill. It was the fact that the other team members quickly accepted him as an equal team member versus just, you know, the trip leader’s son. He really pulled his weight.”

Max Hurndon acknowledged that he picked the sport up quickly, but added that a jump from the calmer southeastern to high, western waters was a wake-up call.

“It was a pretty big difference, because I’d paddled a little bit of whitewater before, but I wasn’t really into it and I didn’t really know what to expect on most rivers,” he said. “I felt the Colorado was a step up from what I’d been doing. It humbled me a little bit. It put things into perspective.”

For the May trip, Mike Hurndon said he found through Facebook a small group of men who had a May 1 launch permit and were looking for a guide. He reached out to the group and was quick to reassure them that his son wouldn’t slow anyone’s pace.

“(The guys made) kind of a long post about how they didn’t need somebody to hold their hand, they were former Marines, and they were tough guys but they just didn’t have any whitewater experience,” he said. “I contacted them to let them know, ‘Hey, I’ve got to have two seats on your trip – one for me and one for my 12-year-old,’ which immediately I knew was going to be something they weren’t counting on. So I sent them some pictures, and basically told them, ‘You’re not going to have to worry about my son.’”

While the four men that the Hurndons will guide will have a support raft, the four members of the Hurndons’ group will not use any of the supplies, Mike Hurndon said. The space restrictions mean that the group will have to do without certain luxuries and will instead be on a backpacker’s diet, eating freeze-dried foods, Slim Jims and bread and butter. The National Park Service also has strict regulations on cleanup of campsites, meaning that even feces has to be carried in secure containers on the boats.

But Mike Hurndon said Friday they’ve made room for certain treats. He said as he packed to haul boats west, he kept his eyes peeled for space for the occasional Mountain Dew or Zebra Cake and that he and his son made sure there was room for a quasi-bocce set to play with on the banks.

Max Hurndon said Monday he isn’t worried about what food they eat or what games they play. He said he just wanted an excuse to get back out on the river, and that a world record is just icing on the cake.

“I thought that it would be kind of neat to set a world record and tell my kids and their grandkids that I set a world record,” he said. “But I’m just thankful for my dad letting us go and putting in the work and finding a permit for us. I just want to go paddle and have a great time while I’m there.”

He said his goals for this trip are simple: avoid a sunburn, don’t chafe and have fun.

After his upcoming paddle ends on May 14, Max Hurndon will have a lot of catching up to do. At the start of this academic year, he missed a total of 13 days of school, and this trip will bring that number to 24. But Mike Hurndon said he’s not worried, and he knows his son understands what is expected of him.

“When he got back (in August), he made up all the work he missed and got straight A’s for that semester,” Mike Hurndon said. “This semester, he’s going to get back on the second to last week of school, and the last week is finals. So he knows wholeheartedly that it’s on him to make up what he has to do.”

Mike Hurndon said the family made sure to tell with teachers and administrators in advance that his son would make up the work, but that this was a “once-in-a-lifetime opportunity for Max to do something that he can’t do once he turns 13.”

“I thought they might put him in 7th grade jail or something,” he said. “But to our delight, they were very supportive. So that was huge.”

Since retiring from a 30-year Army career, Mike Hurndon has taught part-time at outdoor centers in North Carolina and Atlanta, created a Cherokee County chapter of a nonprofit that reaches out to veterans to teach them about paddle sports and he and his wife, Dana, are working to create a nonprofit organization, The Max Life Project, that will take local foster children on kayak and camping trips. Mike Hurndon said the name is an ode to his son and a “symbol of getting the most out of life.”

Max Hurndon started kayaking at the age of 5 and attends Freedom Middle School. He received a sponsorship from Immersion Research for his May trip, and said he loves enjoying and inspiring his friends to enjoy the outdoors. His 9-year-old sister, Micayla, is also an “aspiring kayaker” and attends Sixes Elementary School. The family lives in Canton.

CANTON – The saying, “Age is just a number,” is more of a motto for one 75-year-old Canton resident, who proved that adage, completing the 14-…