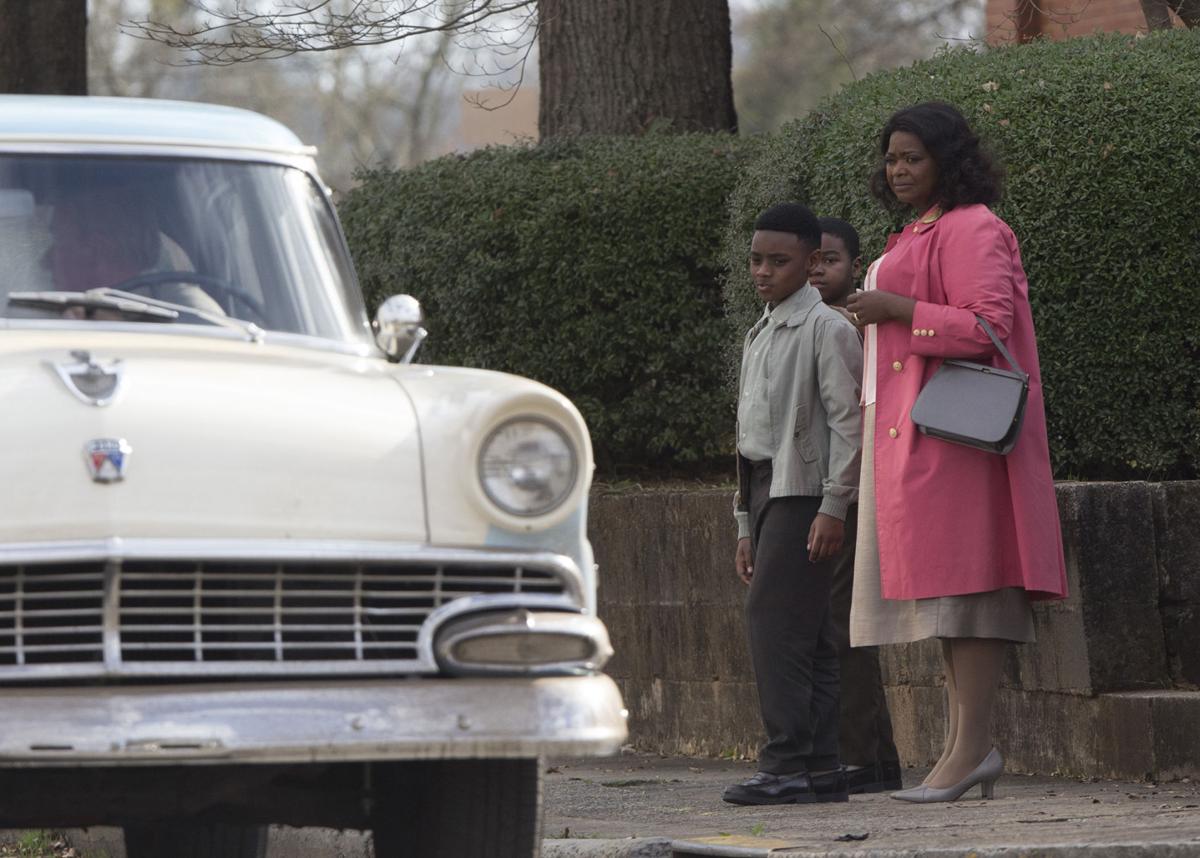 03-14-16 —HIDDEN FIGURES FILMING— Crews film a scene from the movie, “Hidden Figures,” outside the historic 1914 Canton Elementary School building. The film tells the story of a team of African-American women who played a key role in NASA’s first space missions. / Staff-Kathryn Ingall

03-14-16 —HIDDEN FIGURES FILMING— Wade Armour of Canton talks with his grandchildren Ella Bone, 10, and Jaxon, 8, of Canton, while he waits in his 1955 Chevy Bel Aire to film scenes from the movie, “Hidden Figures.” The movie, set in the 1960s, filmed outside the historic 1914 Canton Elementary School building. / Staff-Kathryn Ingall

03-14-16 —HIDDEN FIGURES FILMING— Crews film a scene from the movie, “Hidden Figures,” outside the historic 1914 Canton Elementary School building. The film tells the story of a team of African-American women who played a key role in NASA’s first space missions. / Staff-Kathryn Ingall

03-14-16 —HIDDEN FIGURES FILMING— Wade Armour of Canton talks with his grandchildren Ella Bone, 10, and Jaxon, 8, of Canton, while he waits in his 1955 Chevy Bel Aire to film scenes from the movie, “Hidden Figures.” The movie, set in the 1960s, filmed outside the historic 1914 Canton Elementary School building. / Staff-Kathryn Ingall

Last March, the city of Canton was transformed into the era of the 1960s space race for the movie “Hidden Figures,” and now the film is rocketing to the top of the box office.

“Hidden Figures” tells the true story of Dorothy Vaughn, Mary Jackson and Katherine Johnson, three African-American women who worked as “human computers” at NASA as the country raced against Russia to put a man into space, according to IMDb.com. Starring Taraji Henson, Octavia Spencer, Janelle Monae and Kevin Costner, several scenes from the movie were filmed in Canton.

“Downtown Canton was a good place to film because we have a solid density of older, historic buildings and downtown parking availability allows location coordinators to transport crews and props with ease,” he said.

Misti Martin, president of the Cherokee Office of Economic Development, said the city’s charm was a big advantage for the production team.

“Canton has managed to maintain many of their historical landmarks,” she said. “Areas with historical character and charm are much easier to film, rather than replicate.”

“There is one particular point in the movie when you can see an existing building in Downtown Canton as it currently looks,” said Thomas.

“Hidden Figures” hit theaters Jan. 6 but stayed at the top of the box office over the MLK, Jr. holiday weekend, leading at about $20.5 million in tickets across the country, according to the Associated Press.

Thomas said he believed the film’s message and humor has led to its success.

“The movie tells a story of courage and perseverance and, in addition to its historical context, there is so much everyone can learn and appreciate from it,” he said. “I believe the film stretches further into the narrative of many African-Americans who persevered through unimaginable difficulties at a time when discrimination and segregation was the law.”

“Through that same microscope, ‘Hidden Figures’ also potently portrays the awakening of many in our nation to the wrongs of racism and injustice and who bravely chose to take action. There is nothing we cannot accomplish when we peaceably unite and work together and ‘Hidden Figures’ shows us that in a very real way.”

Though there are no other films scheduled for production in Canton, Thomas said the movie business is a great benefit to the city.

“Most of the time, where film projects happen, nearby stores and restaurants receive increased visitations and an uptick in sales, whether from film crews needing a place to eat or people coming to see a celebrity in action,” he said.

“Numerous downtown businesses have expressed how much they have benefited from having film projects conducted in close proximity to their businesses. Some film projects have even purchased props at local retail establishments.”

Martin said film production allows local residents to get involved and influences tourism.
“Often times, local talent are hired as cast extras, community businesses are hired for set production and most definitely off-duty law enforcement personnel are used for security,” she said. “The long-lasting effect of film is the impact it has on tourism. When you have a huge box-office hit, like ‘Hidden Figures,’ it is bound to draw tourists to Canton to see if they can spot where some of their favorite scenes were filmed.”
Thomas also said fans of the film come to watch production as well, and many came out to see Octavia Spencer for “Hidden Figures.”
“We are hopeful to continue attracting film projects to Canton,” Thomas said. “They are great publicity for our city, our local businesses, Cherokee County and the state of Georgia.”