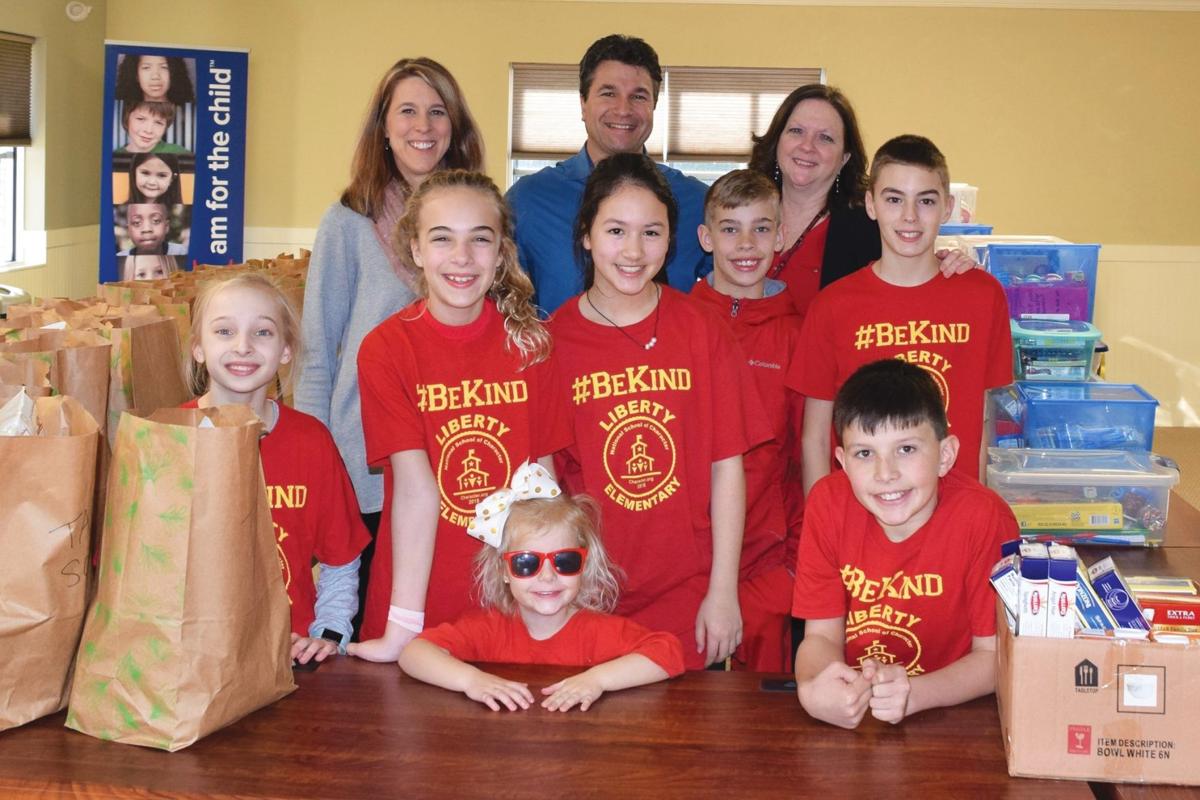 Students from Liberty Elementary are challenged with carrying the #BeKind mentality with them wherever they go and finding ways to spread kindness in the community. 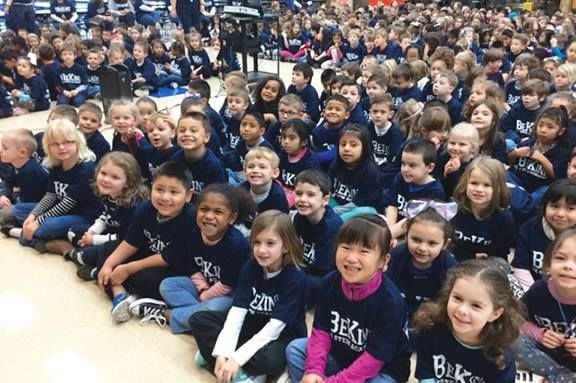 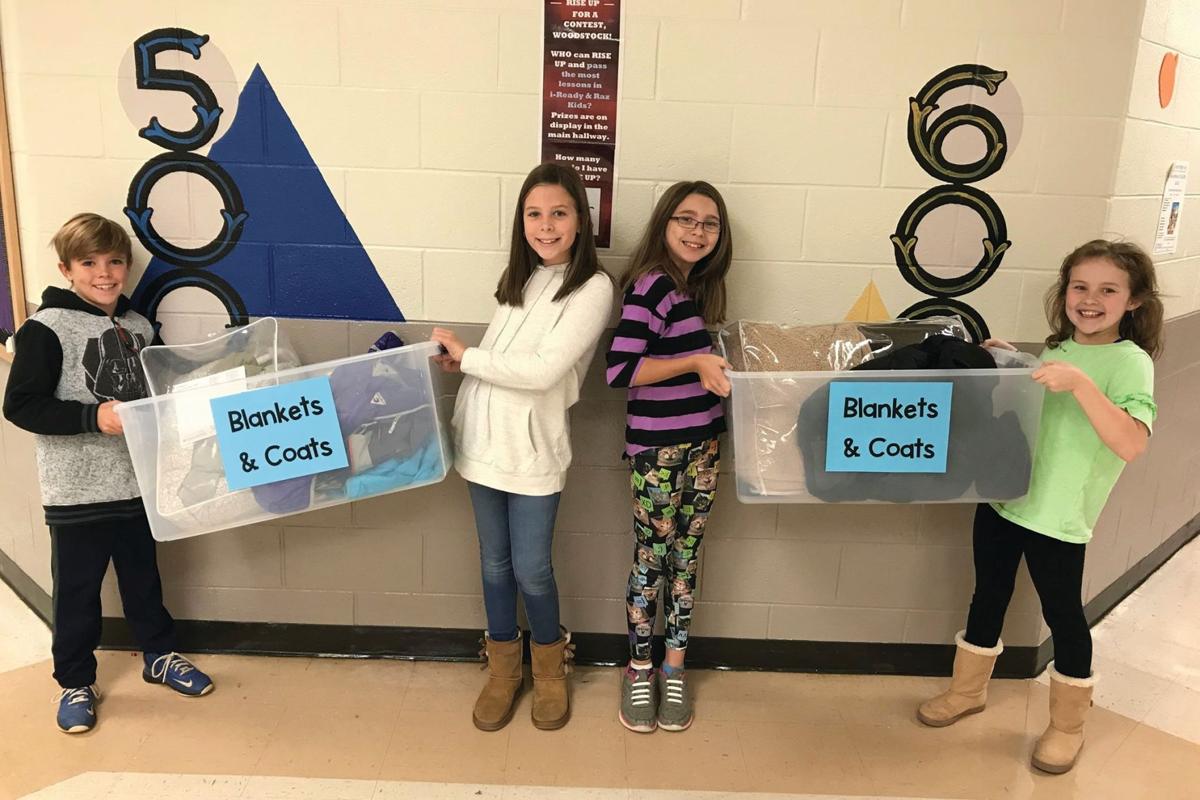 Woodstock Elementary students showing their kindness in the community. 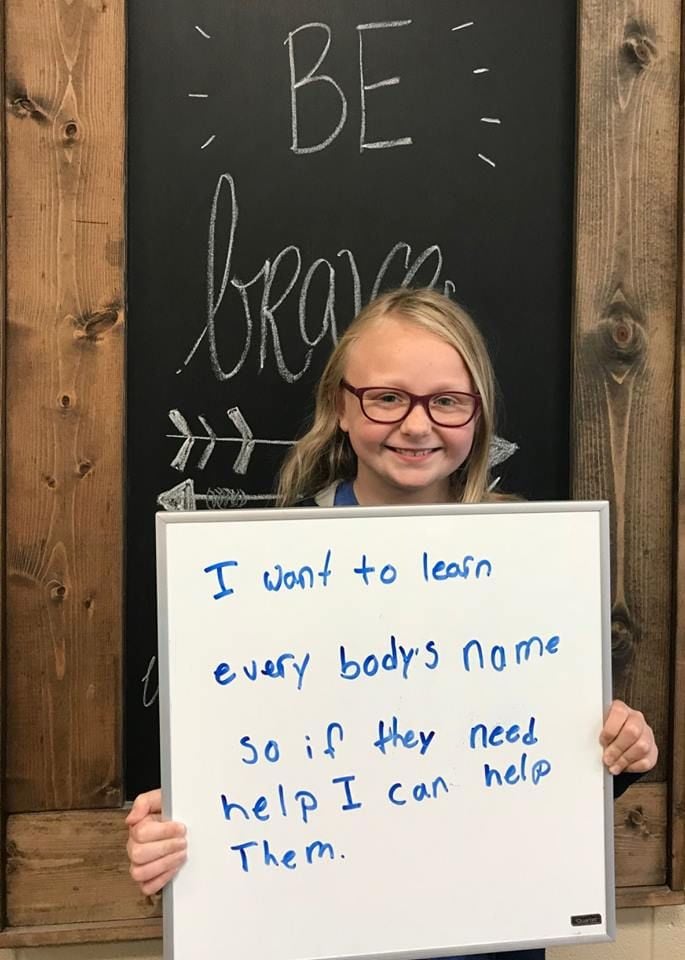 Rylie Davidson from R.M. Moore wants to make sure she can help everyone. 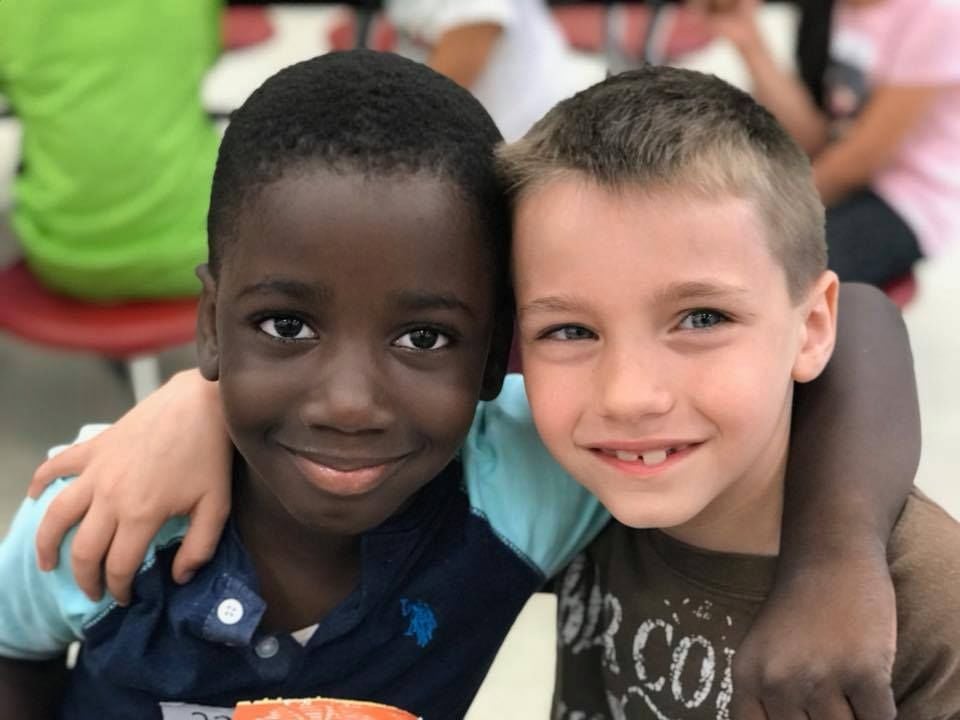 Whitney Nolan said that #BeKind is a way of life and it’s her hope that these students leave elementary school ready to tackle middle and high school with a kind mindset.

Liberty Elementary students wore their matching #BeKind t-shirts and were arranged to form the hashtag. 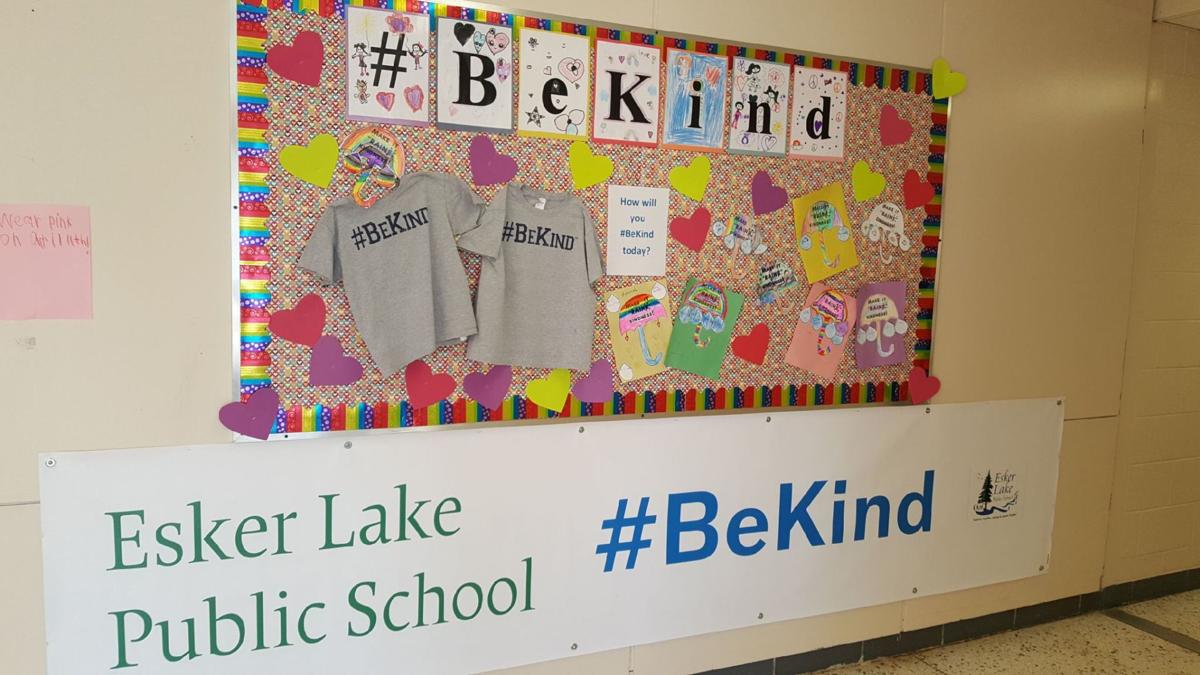 The #BeKind movement made it all the way to Ontario at Esker Lake Public School.

Students from Liberty Elementary are challenged with carrying the #BeKind mentality with them wherever they go and finding ways to spread kindness in the community.

Woodstock Elementary students showing their kindness in the community.

Rylie Davidson from R.M. Moore wants to make sure she can help everyone.

Whitney Nolan said that #BeKind is a way of life and it’s her hope that these students leave elementary school ready to tackle middle and high school with a kind mindset.

Liberty Elementary students wore their matching #BeKind t-shirts and were arranged to form the hashtag.

The #BeKind movement made it all the way to Ontario at Esker Lake Public School.

From the tug of heartstrings and a principal’s longing to show students their purpose and value, the Cherokee County School District welcomed a culture of kindness through the #BeKind campaign.

Whitney Nolan was in her first year as principal of Hickory Flat Elementary School when her parent teacher association co-presidents, Abby Mack and Shannon Coughanour, came to her with a dream. They had seen a school in Tennessee begin a campaign with #BeNice and they felt a calling to bring something similar to Cherokee County. Nolan has always been passionate about kindness and instilling values in students through the classroom environment, so this movement was something she was more than willing to jump on board with.

“I had a decorative stick in my office that said ‘kindness matters’ on it,” Nolan said. “I always used it as a talking point, so when they came to me with the ‘be nice’ concept, I knew the word needed to be ‘kind’ instead of ‘nice.’ Kindness has a deeper meaning, kindness is speaking truth and love.”

Nolan, Mack and Coughanour all admitted that they didn’t know exactly what the movement would look like, but they knew that it was important.

“An elementary school is a cornerstone in any community,” Mack said. “We knew this presented an opportunity to engage students, teachers, parents and community partners to rally the whole community around one powerful cause – transforming our community with kindness.”

The trio started with a video. It told what kindness meant to them and invited Cherokee County students, parents, teachers and the community alike to partner with them in this effort to spread kindness across the schools and Cherokee County.

“We gave the initiative a name and put some basic structure around the idea,” Mack said. “We felt that a kindness initiative was needed and the ripple effect of such an effort would transcend the schoolyard. We knew that we needed to engage not just the students, but also school faculty and staff, parents and community partners if this was to be impactful.”

Nolan said she was surprised by the number of people jumping on board and said she even receives emails from people in different states saying they want to order #BeKind shirts and join the movement.

Coughanour added, “Within weeks, we had reporters calling us for interviews and friends calling to tell us they had seen #BeKind all over the country from Arizona to South Carolina. The response was really inspiring to us and drove us to expand our efforts beyond Cherokee County.”

One of the local principals who has adopted this concept is Doug Knott, principal of Liberty Elementary School.

“After the Hickory Flat video was out on social media, my wife saw it and wanted to get involved,” Knott said. “I have always been leery of ‘anti-bullying’ campaigns because no matter how we say it, kids just hear ‘bullying,’ but this was different. This was a positive way to instill values into students.”

Knott said his mindset on #BeKind is to fully immerse kids into the initiative.

“We do assemblies during the first week of school to introduce new students to the concept, we ask them to wear their #BeKind shirts on certain days, we have banners all throughout the school, we do morning meetings where teachers are encouraged to meet the students on their level and discuss real things that may be going on in the classroom and overall we just incorporate the phrase in everything we do,” Knott said.

Knott also explained that Liberty has a student leadership team made up of fourth and fifth graders who are representatives for the culture of the school. He tasked them with going out to local businesses and asking if they can post the Liberty “pride values” (prepare and be punctual, respect others, inspire others by being kind, display responsibly behavior and exhibit excellence and empathy) in their windows and many of them agreed.

Each school has its own way of incorporating the #BeKind initiative, but what they all have in common is the hashtag, the message and the passion for positively influencing students. Nolan said it’s a focus on changing behaviors and instilling good practices in students’ minds.

“I love to remind my students of the Martin Luther King Jr. quote, ‘Darkness cannot drive out darkness; only light can do that. Hate cannot drive out hate; only love can do that’ and teach them that if someone is demonstrating mean spirited behaviors, it’s not to be taken personally, we instead need to find a way to help them,” Nolan said.

When asked about how #BeKind has affected behavior, both Nolan and Knott said that it is unparalleled.

“We track discipline by the numbers and we have definitely seen those drop since we kicked off #BeKind,” Knott said. “These kids are so much more aware of our core values and how their behavior affects other kids. And when other students aren’t being kind, it’s easier for them to recognize instead of retaliating.”

Mack believes that the movement has become a catalyst for behavior in households throughout our county.

“Our behaviors influence the people around us – our families, coworkers, people we encounter throughout any given day,” she said. “We often joke that it’s difficult to have ‘road rage’ when driving around Cherokee County with a #BeKind magnet on the back of your car or to be rude to a waitress in a restaurant that has a large #BeKind window cling on the storefront.”

The Cherokee County School District has expanded its focus on “Social and Emotional learning” which is a teaching style that focuses on the student’s self awareness. Teachers focus on building the student’s social skills, relationship building, communication and how to control their impulses to create a safe and inclusive environment for students and teachers alike.

Superintendent of schools, Brian Hightower, said in a statement, “Our School Board and I have made the expansion of Social and Emotional Learning programs a major priority and we’ll be mining existing best practices like #BeKind programs for ideas to share district-wide. School life, from academic challenges, to navigating relationships, to planning ‘what next’ after graduation, can create stress for many students. We’re focused on helping students develop resiliency to overcome obstacles and succeed.”

This movement comes down to celebrating kindness, teaching them to honor intrinsic rewards opposed to a physical prize and truly changing the attitude towards teaching. When students feel cared for and safe in their environment, it makes learner easier and more fun.

Nolan said that the first kindergartners involved in #BeKind are now going into fifth grade and she feels a real obligation to prepare them for middle school and beyond.

“I want them to know that I will be watching and supporting them as they bloom and grow,” Nolan said. “When they soar out the door on the last day, they are walking into the craziest season of life; adolescence. And I will know that we have done everything we can to prepare them and I will challenge them to #BeKind in every situation.”

As far as the future of #BeKind, principal Nolan said that she is excited to get the year started so everyone can see her ideas to expand the movement. And Coughanour said, “We will continue to raise the bar on standards of conduct and enrich environments so that students throughout the country can thrive.”

For more information on the #BeKind movement,